11 BEST ROAD AND GRAVEL BIKES AT THE SEA OTTER CLASSIC 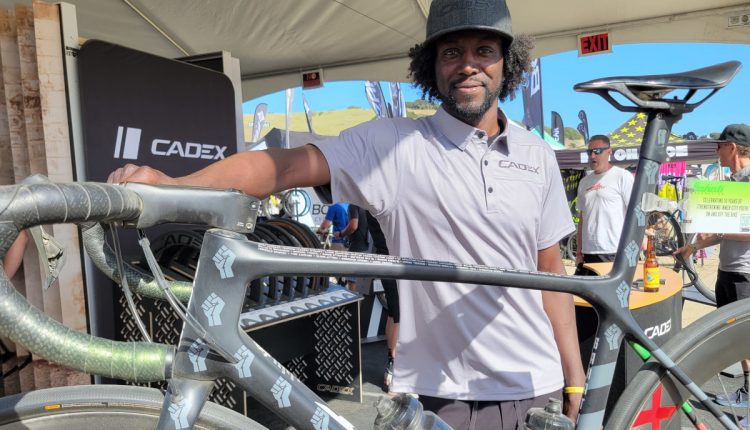 Road bikes, gravel bikes, tandems, recumbents, e-bikes… there’s just about every type of bike being ridden and on display at the festival of two wheels that is the Sea Otter Classic. Four days into exploring the grounds of Laguna Seca Raceway for the 2022 edition of the Sea Otter Classic, we’ve found some of the best looking bikes at the show. With just about ever major brand in attendance everyone has had a lot to feast their eyes upon, but here’s a selection of our drop-bar favorites. 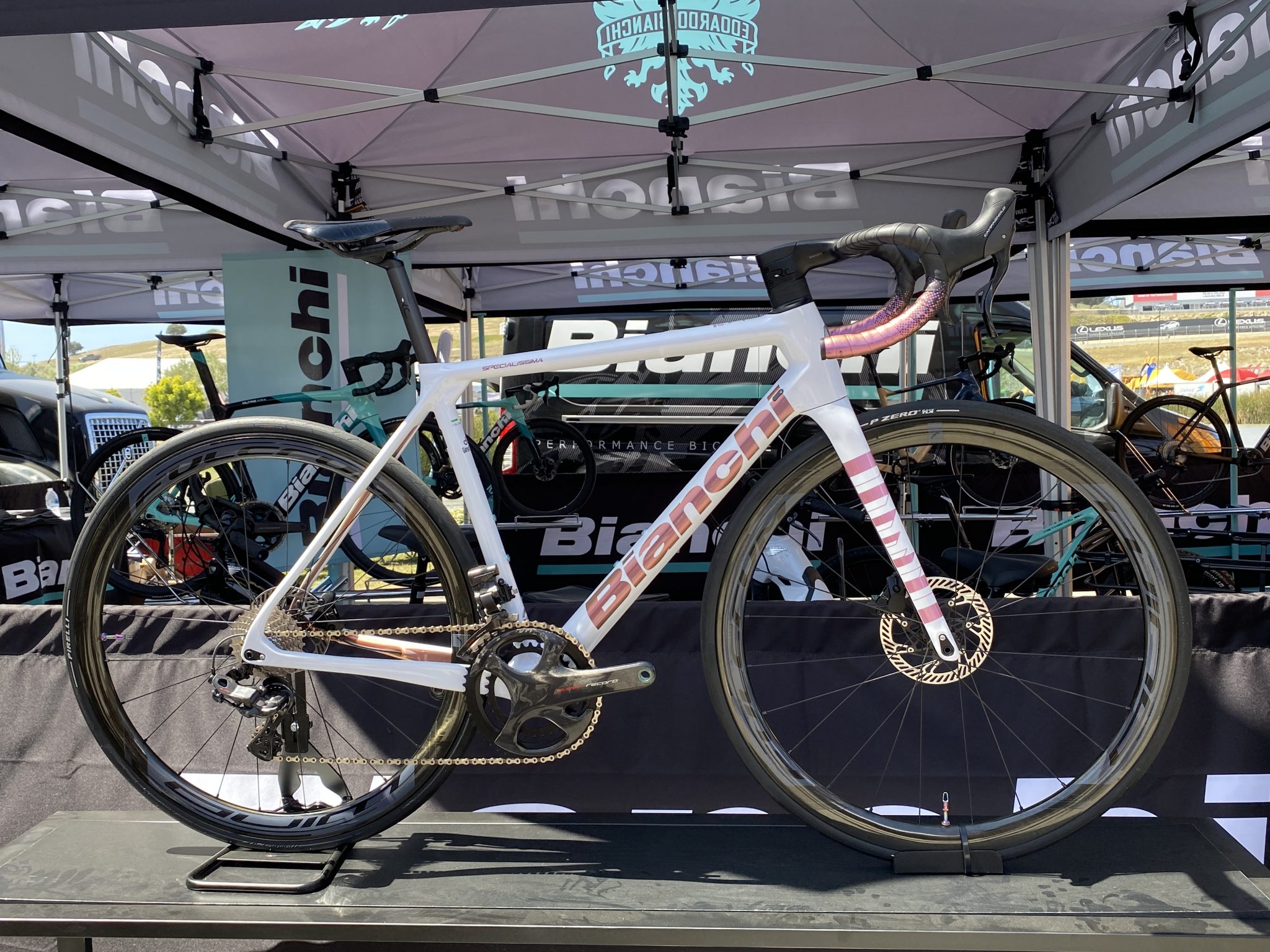 Easily the most distinct and striking bike on display was Bianchi’s special-edition Giro 105 Specialissima. It’s one of 105 frames in existence and the only one in the country. Made in honor of the 105th running of the Giro d’Italia, Bianchi plans on the bike being up for grabs after the festival. We were told this is a unique build and believed to be the only frame sporting a Campagnolo Super Record groupset with the classy Fulcrum Wind 40 wheels. The paint scheme was inspired by the hues of the sunset in the Dolomites during the spring as the colors change from pink to orange in the sunlight. 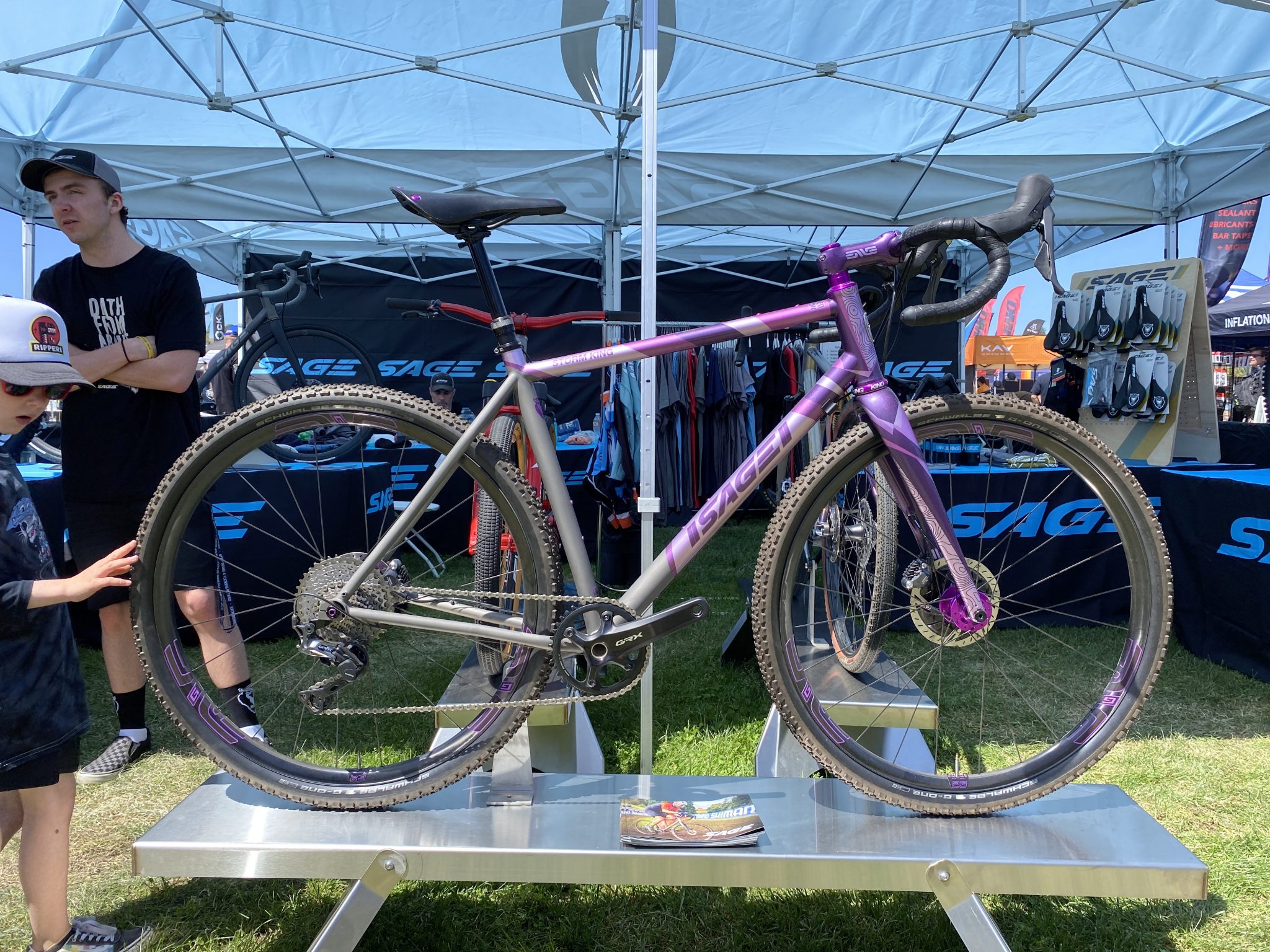 Oregon-based Sage Titanium was displaying their Storm King gravel bike. The Storm King has long been one of our favorite platforms for wide tires on a titanium frame. With room for up to 700x50mm rubber and all the characteristics that make titanium a preferred frame material the Storm King adds some class to the adventure riding scene. 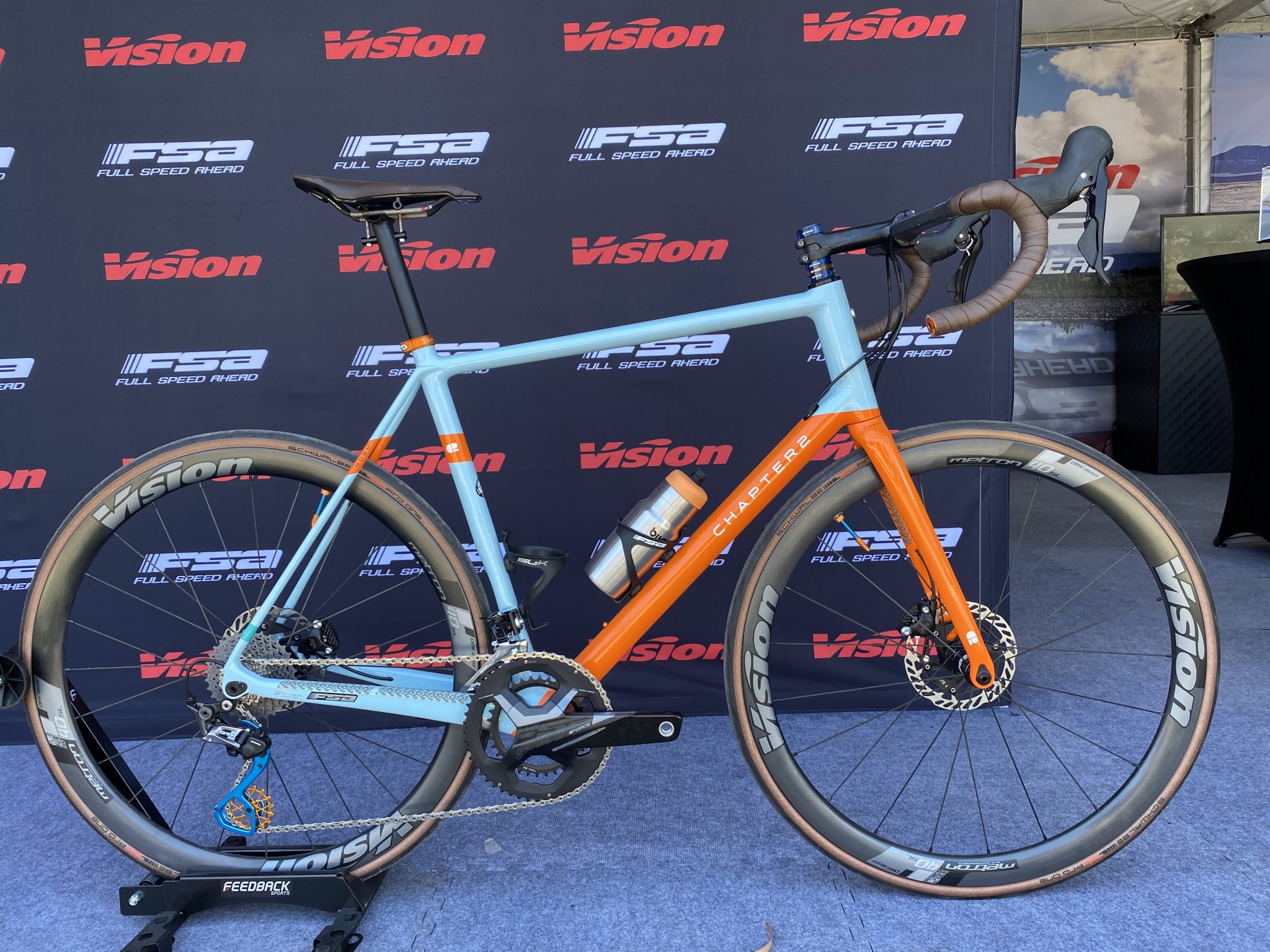 Chapter2’s Huru  frame was propped up with some FSA and Vision parts. Earlier this year we had a chance to chat with Michael Pryde and the New Zealand based Chapter2 crew and are currently working on a review of the similarly good looking KOKO aero-road bike. FSA’s K-Force crankset is matched to a GRX rear end with a flashy oversized derailleur cage. Vision’s Metron 40 SL wheel set keeps the build performance-focused. 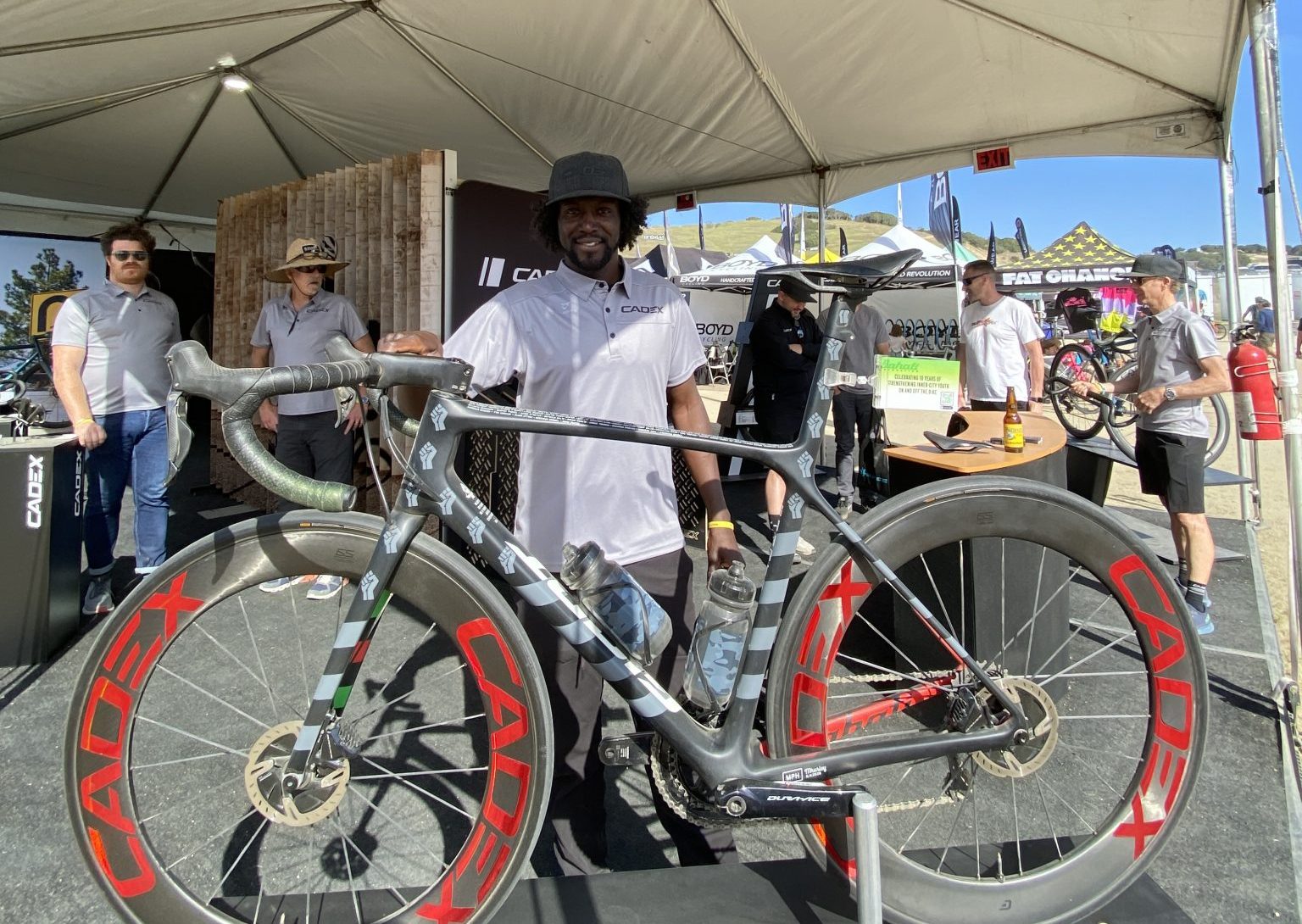 On hand at the Cadex booth, former professional racer Rahsaan Bahati was proudly displaying his Giant TCR with a fully-custom paint job by Michael Hurley of L.A.-based MPH Paint honoring victims of policy brutality. Bahati and Giant have partnered on a collection of bike over the past four years, but this is the most meaningful bike we’ve seen at the show. The flashy, gloss red Cadex stickers added a deserving bit of personalized flare. 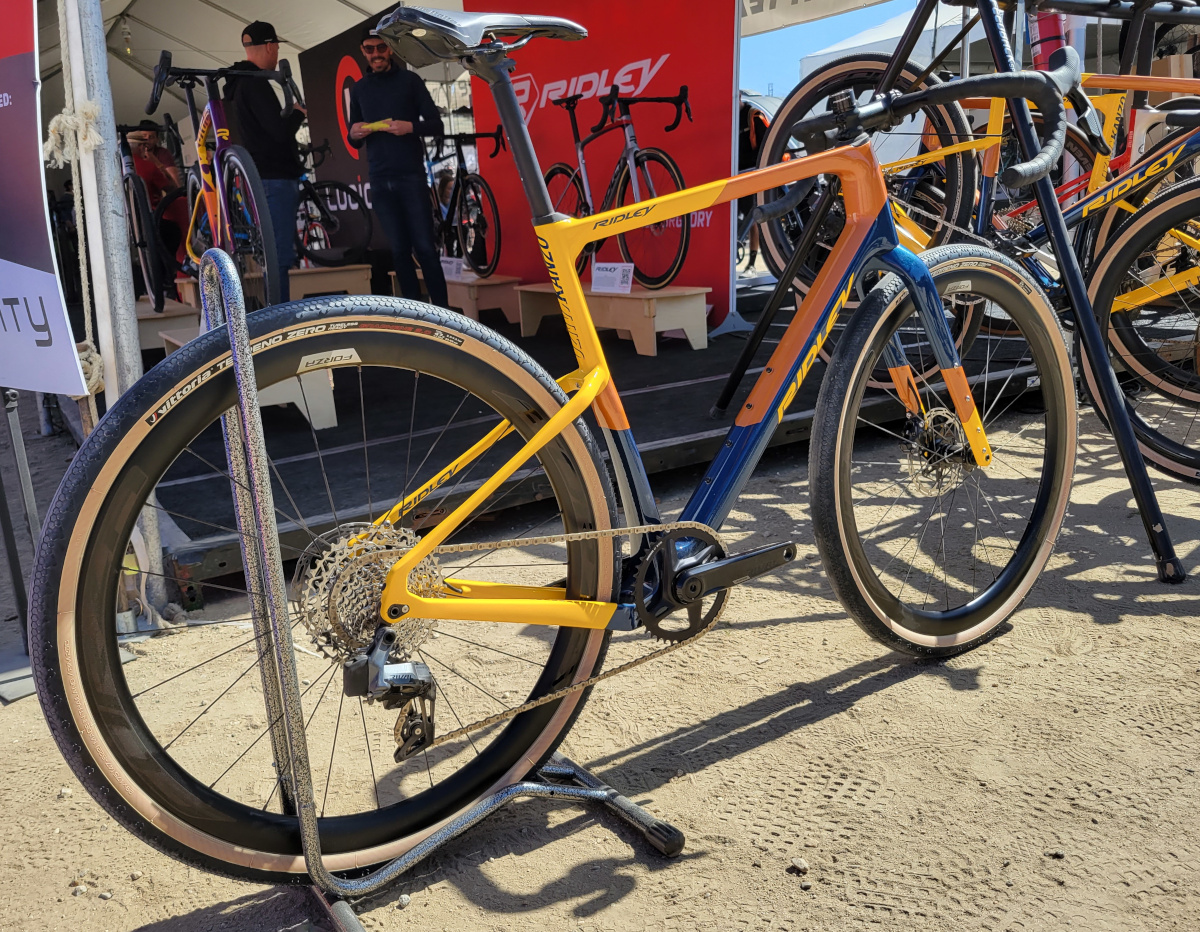 Ridley has definitely capitalized on the segmentation of the gravel market in a quasi-Goldilocks manner starting with a more traditional style ‘cross bike, the colorful Kanzo Fast for the racing types and finally this new Kanzo Adventure, which as the name implies is intended for cyclists more interested in the slow-long haul in life. 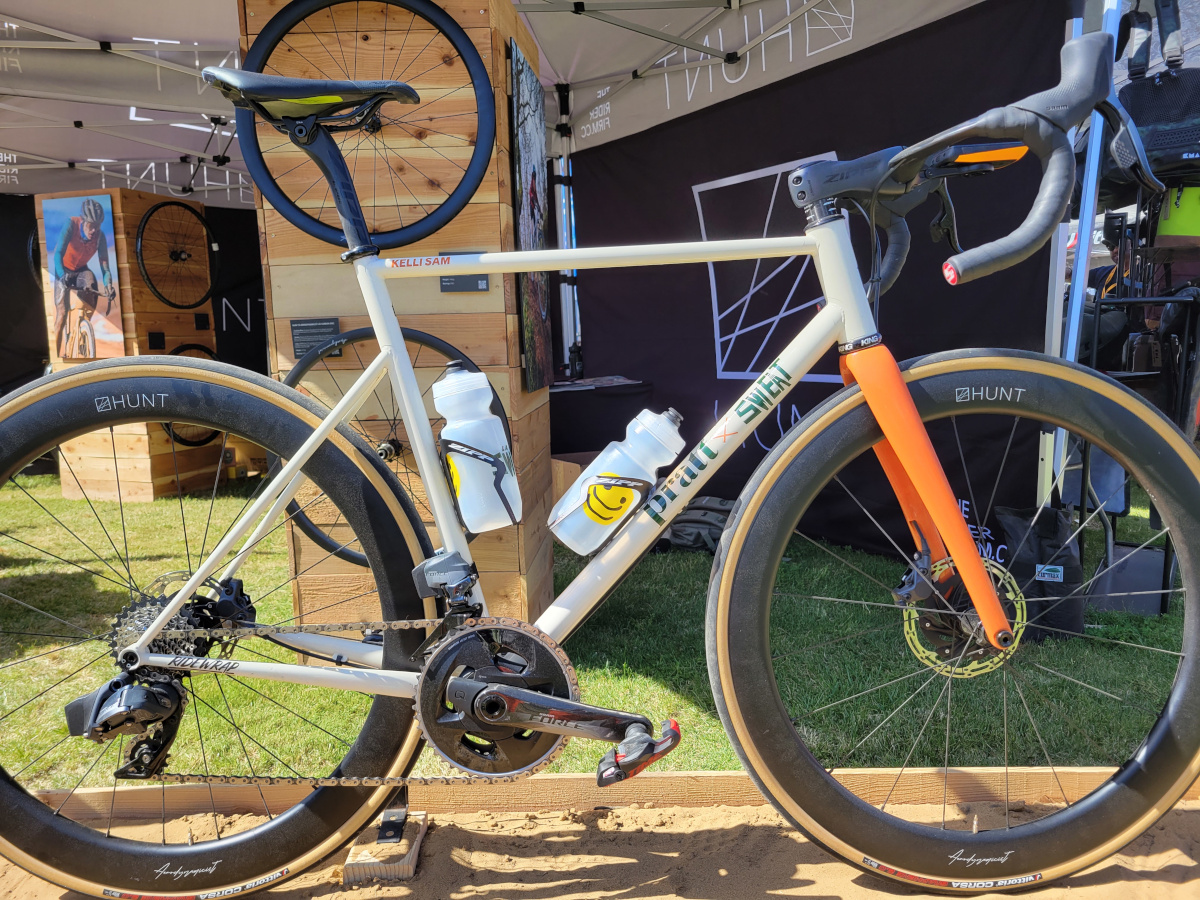 L.A. Sweat is a women’s crit racing team that has partnered with east coast based Pratt Frameworks to make their steel team bikes. The partners in the team include; Hunt Wheels, Time pedals, SRAM, Hammerhead, Ride Wrap and Santini. 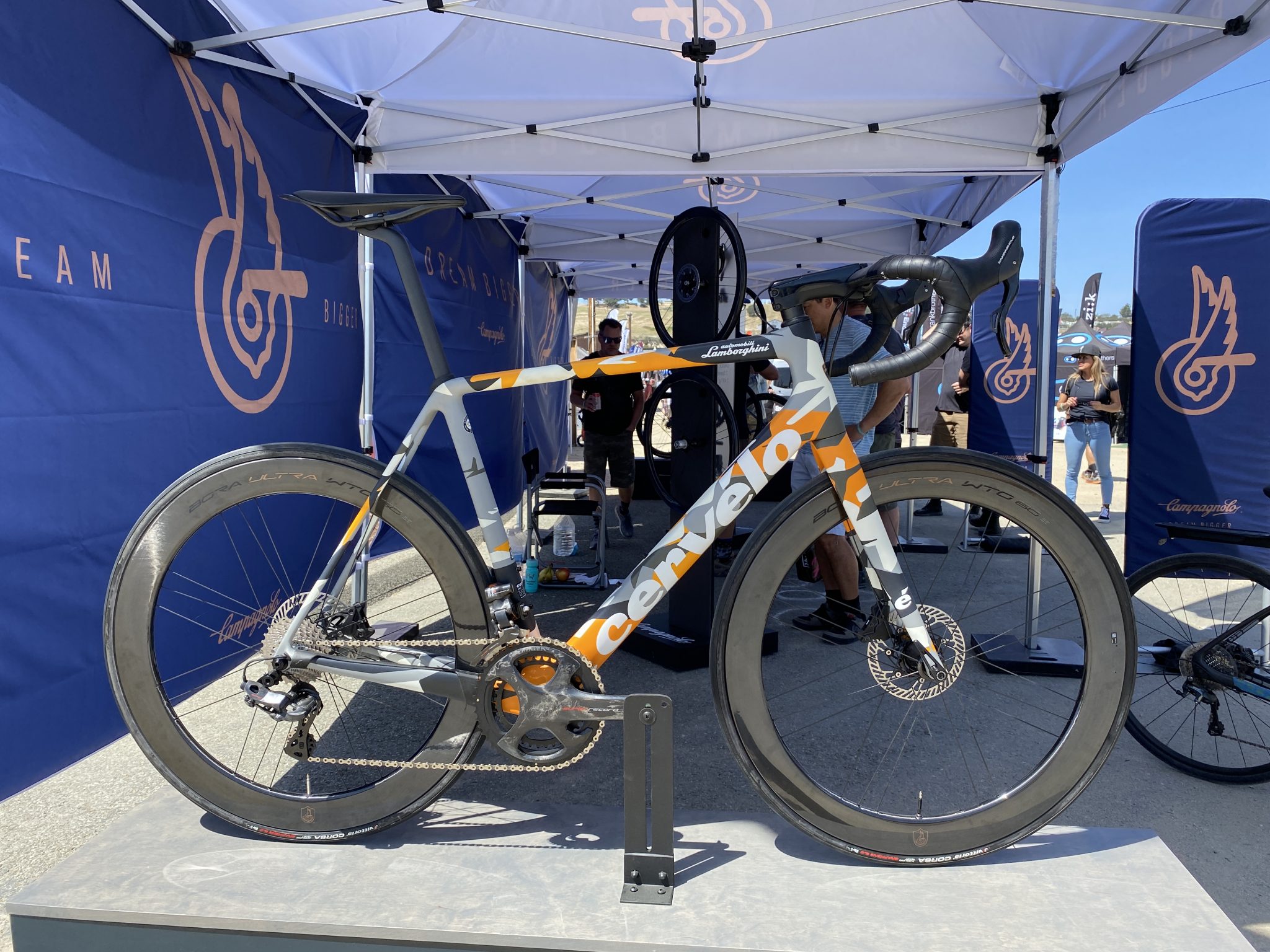 A sweet Italian collaboration at the Campagnolo booth had roadies and car fans in awe. The Campagnolo team brought this eyecatching Cervelo R5 to the show. The full Bora Ultra WTO and Deda cockpit spec was a nice touch to complete the Italian selection on the R5. 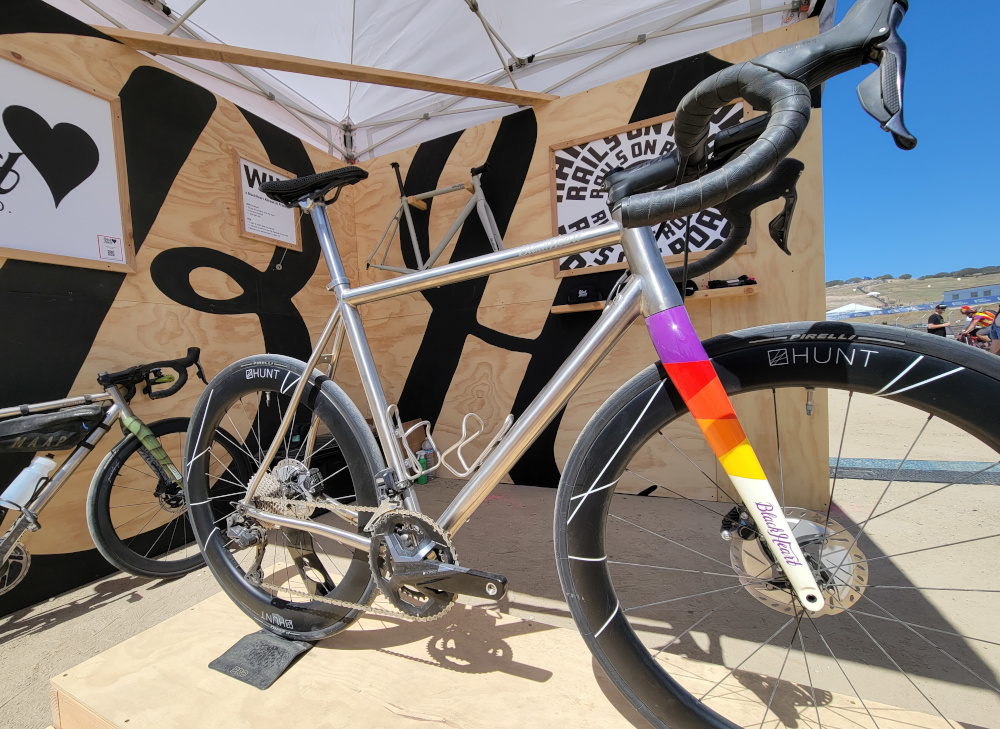 SoCal bike shop Luft & Blackheart Cycles were showing off this classy titanium bike with their color option fork that adds a nice splash of life to the bike. The frame is available in 8 sizes with a fork and seat post selling for $2750 and complete bikes starting at $5500. 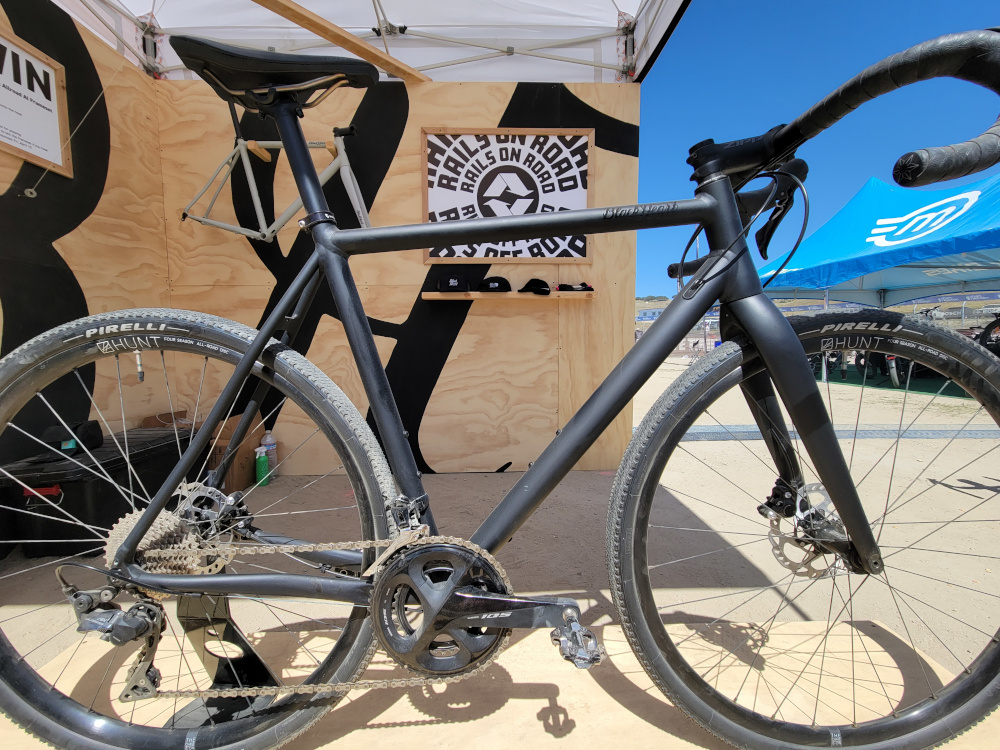 Also on display at the Sea Otter was Blackheart’s new 7005 double-butted aluminum bike available in your basic BoB (black on black) and nice cream color. The frame with carbon fork sells for $1375 with a complete bike with Shimano 105/Ultegra  selling for $2999. 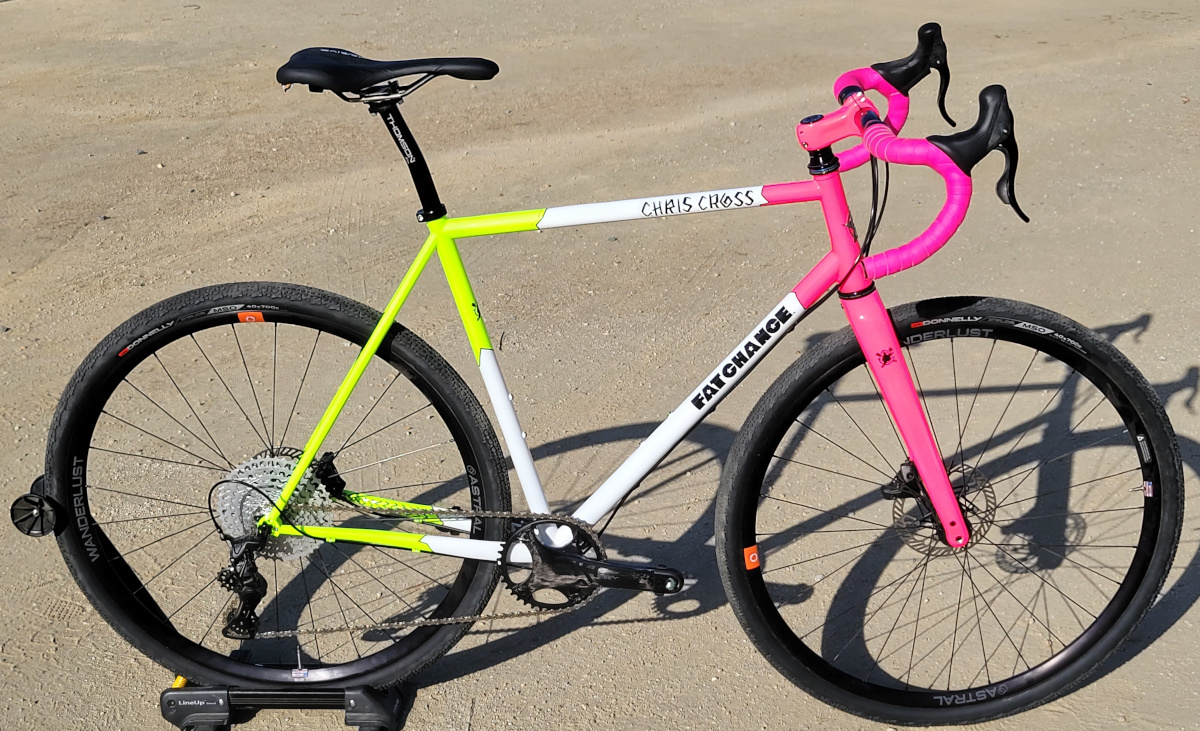 Given that we are firm believers in  the multi-use diversity of any bike with added wheel clearance, while designed for ‘cross racing, there’s no stopping from this Fat Chance from being a sweet, hard-to-miss steel road or gravel  bike as well.  Chris of course is a legacy American frame builder most famous for his mountain bikes, but who started on the road. No longer an east coast local, the Fat Chance factory is located in Ashland, Oregon 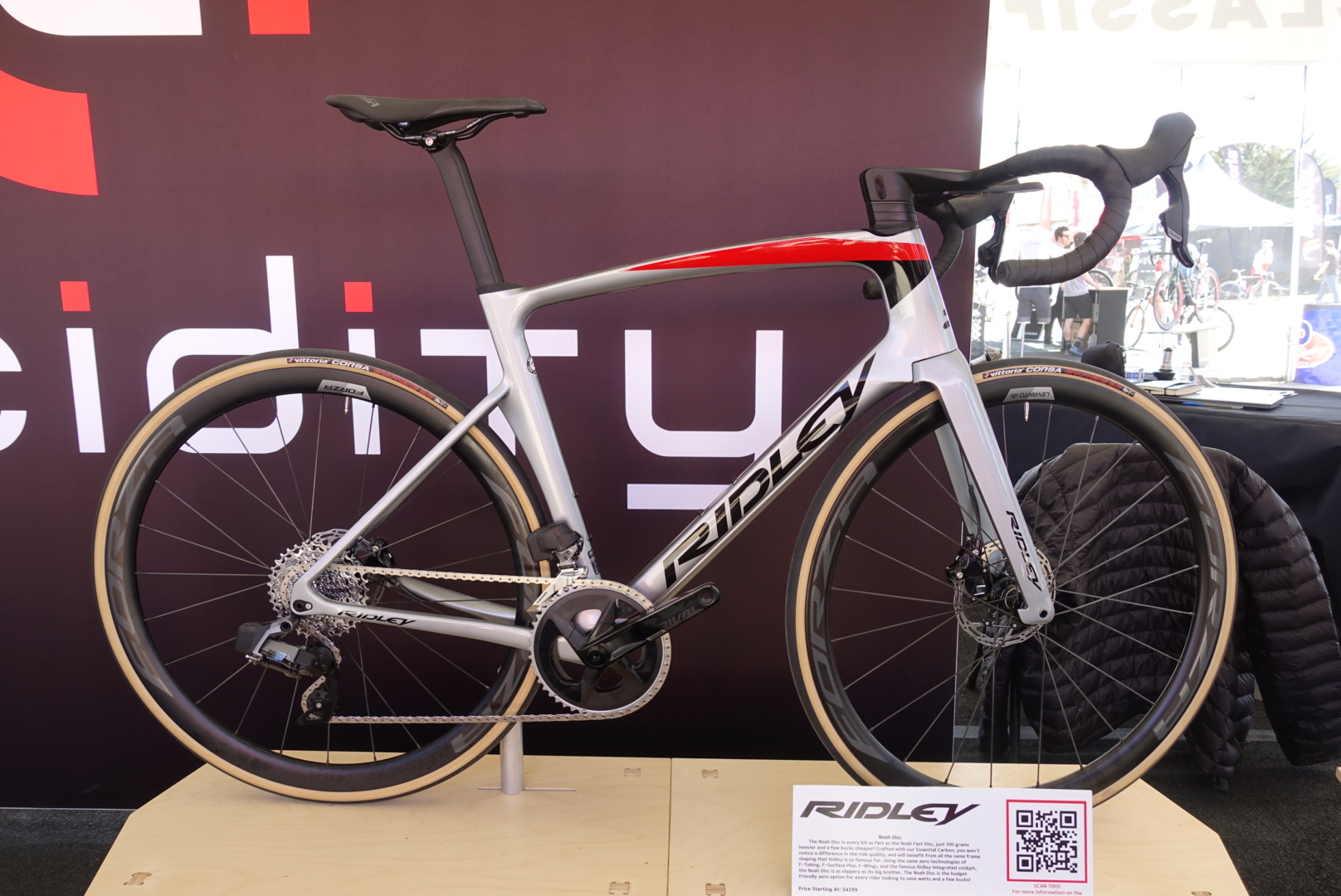 Probably the best looking bike on display we could possibly afford is Ridley’s updated Noah. Aspiring racers can now match the look of WorldTour pros thanks to Ridley’s price point-oriented updates to the Noah frame. A slightly heavier carbon lay up allows Ridley to bring the aesthetics and many of the same handling characteristics away from the premium level into a more accessible range, with this SRAM Rival AXS build running for $4299. 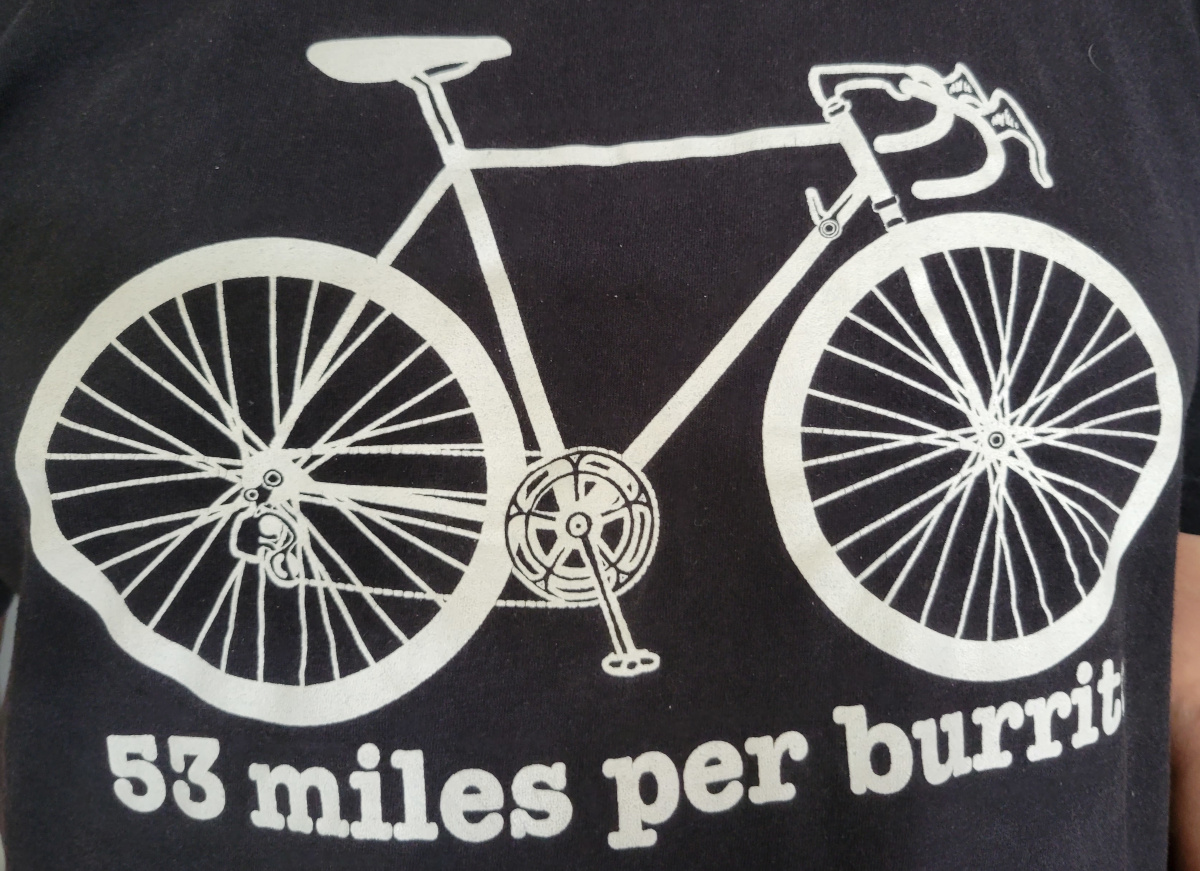 THE BIKES OF UNBOUND GRAVEL