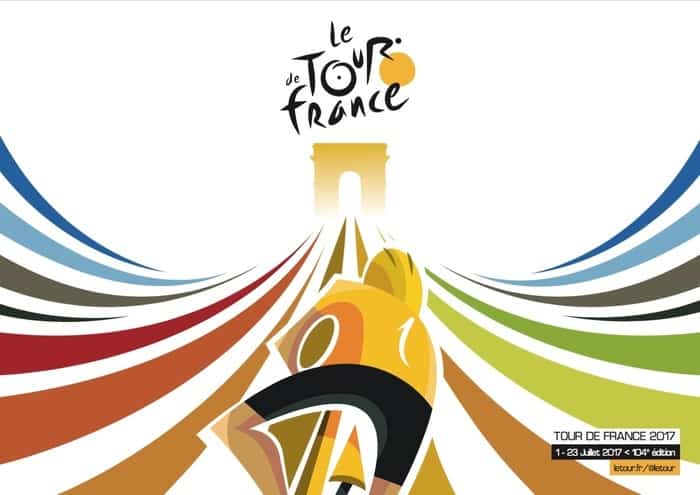 Tour de France organizers on Tuesday unveiled a 2017 course light on mountain climbs but reigning champion Chris Froome
insisted they would still be key to his bid for a fourth title. The visually spectacular 104th race over 3,516 kilometers (2,183 miles) starts in Dusseldorf, Germany on July 1 with the traditional time trial. There are five real mountain stages, fewer than in 2016.
“This Tour will be won in the mountains, the time trials are too small to have any real effect,” said Froome, winner in 2013, 2015 and 2016.  Tour director Christian Prudhomme said the route “has been designed to be won by a true champion”, without naming Froome or identifying any other favorites. Puncher Dan Martin said he felt the route brought him into the picture. “There’s plenty of scope for damage every single day. You have to survive,” the Irishman said. “This route is better suited to my style than previous years.”

The opening 13km time trial offers world champion time-trialist Tony Martin the chance to clinch the yellow jersey on stage one as the Tour starts from his native Germany for the first time in 30 years. The northern start means the route has to be ‘J’ shaped, and this year misses the north and west of France entirely, said Prudhomme.
With nine varied flat stages, five hilly ones designed to open up the challenge, the five real mountain stages are designed to have a visual backdrop which will amplify the exploits of the athletes who excel there. And if the crucial penultimate day’s time trial starting at the Marseille Velodrome football stadium is only 23km long, it will be run in searing heat and feature a 1km stretch at 18 per cent gradient.
Contrary to nearly all the preceding Tours there will never be more than two consecutive days of climbing either.
THE TOUR UP CLOSE
The Tour’s toughest stage on paper is the 214km Pyrenean run from Pau to Peyragudes which feature the mountain where the James Bond movie ‘Tomorrow Never Dies’ was partly filmed, and has a summit finish as the fifth climb of the day.

In total contrast, the following day’s stage 13 is a short but spectacular 100km mountain run from Saint Girons culminating in a 27km hair-raising descent to Foix, featuring extreme climbs and descents along the way. This is followed with a day for punchers and will evoke powerful memories for both the Olympic champion Greg Van Avermaert and world road champion Peter Sagan. The 181km 14th stage culminates in Rodez where the Belgian out-paced Sagan for a stage win in 2015.

But even in the first week there will be stages for rollers, sprinters, testing cross-wind infested plains, and on day five the Planches Des Belles Filles where Bradley Wiggins took the yellow jersey in 2012 on a day Froome won the stage. “I was delighted to see it on the race again,” said Froome. There’s not enough to make a great deal of time there, but it makes me happy to see it there.”

There was further good news for Froome when it was announced that around 10km of mountain terrain, at crucial tactical climb points, would be stripped of roadside fans. An accident caused by packed crowds on Mont Ventoux in 2016 saw him run part way to the summit having abandoned a broken bike.

The two Alpine stages on day 17 and 18 finish at the summit of the Izoard, whose lunar summit finish is at 2,360m where oxygen will be rarefied. “It looks pretty impressive,” said Froome. “I’ve never raced there, we’ll need to climb it in practice.”