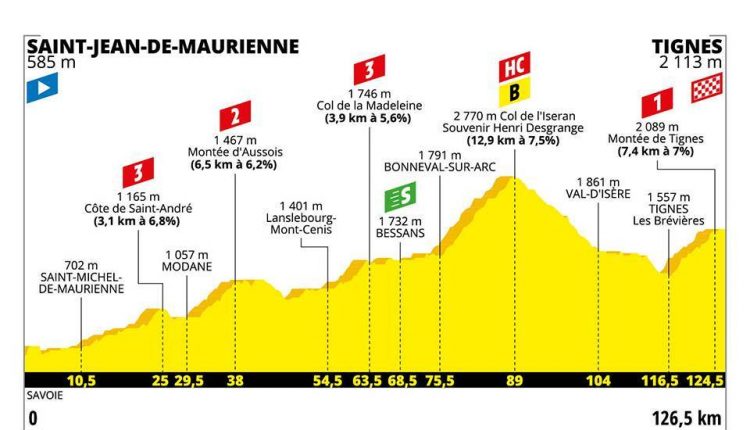 High temps melting  snow and ice caused unraceable conditions and forced Tour organizers to unexpectedly cancel  stage 19 mid-race. A decision was made to take the split times from the summit of the Col de L’Iseran where Egan Bernal lead the yellow jersey of Egan Bernal by over 2 minutes.

Racers looked despondent as they were flagged down by race officials and announcements were made over race radio marking the cancellation of stage 19.

Julian Alaphilippe lost the lead of the Tour de France in the Alps on Friday and immediately ruled out any chance of wearing the yellow jersey when the race ends in Paris on Sunday.

“I don’t think it is possible, I have been beaten by something that is stronger than me, that’s how it is,” he told France 2 after stage 19 was cut short because of a hailstorm which left the road to Tignes temporarily impassable.

Alaphilippe wore the yellow jersey for 14 days, carrying the hopes of the public who are so eager to see a French winner for the first time since Bernard Hinault in 1985 and defying the pundits who felt he would wilt in the Pyrenees. In the end it took a bold break from Egan Bernal of Team Ineos to take it off his back.

“I expected it,” said Alaphilippe who is now 45 seconds off the lead. “I gave the maximum. I have no regrets.”

“It was a dream to wear it, I carried this dream longer than I had hoped and I beat myself up every day to keep a hold of it. From the moment I took hold of the yellow jersey I dreamed but I never thought I could win the Tour.”

Bernal was leading the stage when it was stopped on the descent of L’Iseran.

Times for the stage were taken at the top of L’Iseran at which point the Colombian was over two minutes ahead of Alaphilippe on the stage. The 22-year-old now looks the favorite to come through Saturday’s stage 20 and claim his first Tour win. Alaphilippe, though, can still of making the podium on the Champs-Elysees on Sunday.

Complete results will be posted as they are released.

After a memorable 19th stage @Eganbernal has ridden into the yellow jersey at #TDF2019. No confirmed GC gaps as yet, with times to be taken from the top of the Col d’Iseran pic.twitter.com/wHe9UVa330