2019 Tour Down Under Recap and Results: Stage 6 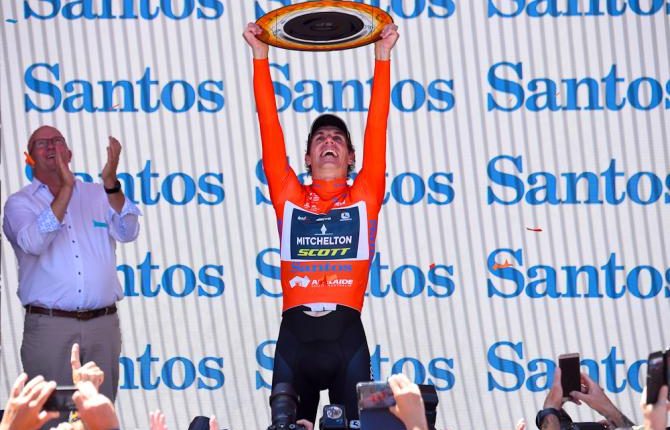 South Africa’s Daryl Impey hung on up the torturous final Willunga Hill to become the first cyclist to win back-to-back titles at Australia’s Tour Down Under outside Adelaide on Sunday.

Mitchelton-Scott’s Impey, who won last year’s UCI season-opening event on countback, dug in to take this year’s general classification behind sixth-stage winner Richie Porte of Australia up the physically-demanding three-kilometer (1.9-mile) climb to the finish line.

Impey, with a total time of 20 hours 30 minutes 42 seconds, beat Porte by 13 seconds for the race with Dutchman Wouter Poels of Sky Team a further four seconds away in third place overall.

No one has won consecutive titles in the 21 years of the Tour Down Under, while Porte, the 2017 Tour winner, has been runner-up four times.

“I never dreamed to come here and win twice in a row,” Impey said.

“Every year we come here with strong ambitions. I knew the competition is always tough. I just believed in myself, and it was just fantastic to pull it off.”

It was Porte’s sixth-consecutive victory up the notorious Willunga Hill stage but knowing he needed to win by 10 seconds to beat Impey, he sat up out of his saddle and gave everything to try to pinch the title at the summit.

But even though Porte reigned supreme yet again up the hill, Impey did enough to finish a few meters behind him and Poels, to secure the race’s overall classification.

“For me, to win six times up to Willunga is a great feeling,” Porte said.

Impey, winner of stage four and seven seconds off the lead before the final stage, benefited from overnight leader Patrick Bevin being unable to keep pace with the peloton as he battled the injuries he suffered on stage five.

CCC Team’s Bevin took part in the final stage after being cleared of serious injury from a heavy fall with nine kilometres left in Saturday’s stage.

The 27-year-old New Zealander had overnight scans in hospital and was cleared by team medical staff after a concussion test.

But Bevin dropped back through the peloton on the final climb to concede the race lead to Impey.

Bevin said he was feeling okay in the early part of the stage, but was quickly in trouble up the climb.

“I was very sore to start with and then I didn’t feel too bad once we got rolling,” Bevin said.

“Honestly, I was entertaining the thought of getting around. I had nothing to lose and I was going to go out and just hang on.

“But, we started fighting on the run up to the climb and I was in the red there, I was in trouble.”

Bevin gained some consolation by winning the sprint jersey in the race with 56 points from Dutchman Danny Van Poppel on 54 points and former triple world champion Peter Sagan on 50 points.

Australia’s Jason Lea finished King of the Mountain with 30 points on countback from Poels, also on 30, and Porte with 28.