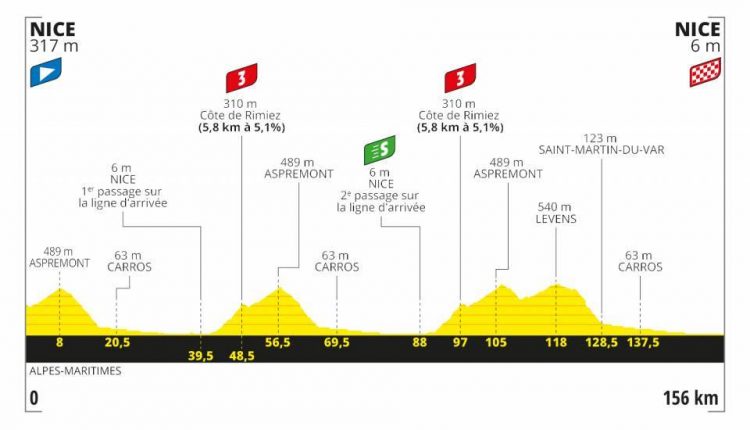 A rather unfamiliar format perfect for a great popular show: three loops in the hinterland of Nice including one to be covered twice giving the spectators an opportunity to see the pack go by all along the day before possibly witnessing the first act of the great battle between the sprinters. A bunched sprint is indeed expected at the end of the long final straight on the Promenade des Anglais. – Christian Prudhomme

Leaving the well-heeled Riviera resort the 22 teams will race 3,484km through some of the prettiest vistas in France in a globally popular event broadcast in 190 countries. The organisers of the Grande Boucle, as it is known, also hope to provide a new blueprint for sports in the time of Covid-19. Defending champion Egan Bernal of Colombia is again a good bet for the overall leader’s fabled yellow jersey, with Slovenian strongman Primoz Roglic and emotional French climber Thibaut Pinot chief among his rivals on a course that crosses all five of France’s mountain ranges.

Bernal’s Ineos team boss, Dave Brailsford, told a clutch of reporters by video conference Friday that he had stuck with his 21-day masterplan for an eighth victory in nine years because he felt the Tour would indeed make it all the way to the cobbles of the Champs-Elysees.

“It’s important for sport and important for society, but we don’t know, nobody knows (if the Tour will make it to Paris), but the organisers particularly deserve a lot of credit and they really have done everything
possible to make it work.”

The French authorities feel the cultural impact of the race is important enough to risk even in the uncertain times of the coronavirus pandemic.

“The Tour de France should provide a sign that we can continue to live, that our society is resilient,” said French health minister Olivier Veran a day after the prime minister put 19 regions into a coronavirus red zone. When the race sets off Saturday from the Promenade des Anglais in chic seaside Nice, only a few dozen people will be present.

In the low Alps outside Nice on Sunday the 176 riders will likely see fewer fans on the roadside after vehicles were banned, meaning the packed ranks of camper vans are off the menu this year. The action could explode Sunday with Julian Alaphilippe, a Frenchman who led the race for 14 heady days in 2019, promising to again try and make an
early grab for the yellow jersey. The real action is likely to be the war of attrition between the two
strongest teams Ineos and Jumbo. Both squads will be concerned that limited warm-up time could make the race less predictable and wary of outliers capable of summoning a massive climb performance.

“I’ll have to be patient,” says Pinot, who rides for French team Groupama-FDJ and is still trying to become the first Frenchman to win the Tour since Bernard Hinault in 1985.

“I’m tougher and stronger than last year,” promised Pinot, who pulled out with injury deep into the 2019 Tour.

There are also several diminutive Colombian climbers ready to pounce.

“You can never look back,” Brailsford said on Friday.

“I’m very excited about this young team with an experienced support cast. Egan deserves the leadership. He’s a brilliant rider, a huge talent.”

Whoever emerges from the sunflowers and the chateaux wearing the yellow jersey atop the popular culminating climb of La Planche des Belles Filles, will have won one of the most hotly anticipated Tours in its 107-year history.

The FIVE Key Stages of The 2020 Tour de France