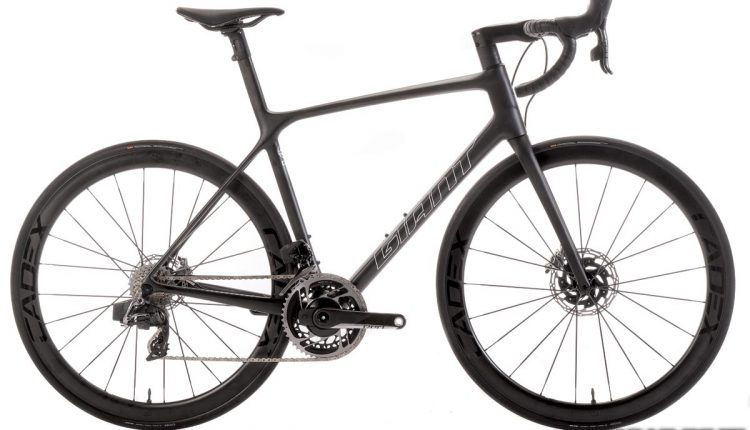 It was over 20 years ago that the Giant TCR (Total Compact Road) shook up the racing world with its sloping top tube and then-revolutionary geometry. Although mimicking the popular sloping top tube design used on mountain bikes, the compact geometry (penned by British aero specialist Mike Burrows) was so extreme that it was banned from racing at first before ultimately being deemed legal (it didn’t hurt that one of the world’s top teams—once—was sponsored by Giant).

These days there are many road bikes on the market that rely on a compact geometry design (and the small, medium and large sizing that came with it), but what hasn’t changed is Giant’s drive to push for a better and more refined race bike. 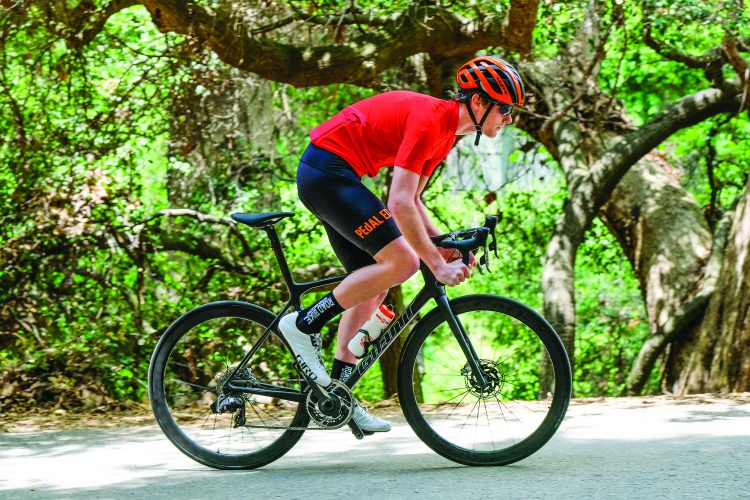 Giant offers three levels of carbon composite construction for this ninth version of the TCR, and our Advanced SL test bike sits at the top of the heap. They also offer the Advanced Pro and Advanced models, both of which minimize carbon layup complexity and levels of composite grade for less money.

Giant remains the world’s largest bicycle manufacturer, and this has given them the resources to experiment with new processes that streamline the production. The new SL line is comprised of laser-cut carbon swatches rather than the machine-stamped version of the past. The swatches are also now robotically positioned for the highest level of precision. These two processes alone have resulted in Giant’s ability to minimize frame weight significantly and to refine areas for added stiffness.

Like many other brands, Giant has looked to optimize aerodynamics, so in addition to the new construction technique comes refined tube shaping. There is a new downtube shape that is wider and is now rounded on the front-facing side. The fork has also been changed slightly, but overall, the entire bike has just been tweaked and further perfected. From a distance, most don’t see the alterations, but up close the changes are significantly more noticeable.

“There are no widgets or funky proprietary gimmicks, just refined engineering and production that offer noticeable weight and performance gains.”

Giant still used the Press-Fit BB86 bottom bracket that they have relied on for years. The frame and fork also retain their bike-specific steerer with an enlarged 1.25 to 1.5-inch taper.

Another returning signature frame feature is the ISP (integrated seatpost) that requires you to cut the seat tube to the proper length. While this is still a hassle, the seatpost is designed to deliver an optimized ride quality. Our size medium has a 99.1cm wheelbase with a 16.5mm head tube. The chainstays are 40.5cm and still leave room for 32mm tires.

This top model relies on the 12-speed SRAM Red AXS eTap drivetrain and a 48/35 combo up front with the 10-28 cassette in the rear. Giant fitted their carbon stem and bar with a new short saddle on top of the integrated seatpost. The frame comes with two seat masts, short and long, but remember this is a permanent setting, so once you cut it to size, there is no going back (remember, measure twice, cut once!).

Cadex is Giant’s house brand of accessories, and our bike came with a set of their new 42mm-deep Cadex wheels mounted with 25mm tubeless Cadex tires. The wheels have a hookless rim profile with 19.5mm internal and 23.4mm external dimensions. This lets the tires measure a bit wider at 26mm, but still relatively narrow for today’s standards. The wheels are laced using a proprietary carbon spoke that is aero-optimized and directional.

Our TCR Advanced SL 0 Disc test bike hit the RBA scale at an impressive 14.54 pounds. Sure, ours is the top-tier bike at $11,000, but it is more than impressive considering the 42mm-deep tubeless wheels, disc brakes and
power meter.

Cornering is spot-on, and the bike feels like it’s on rails. Since many bikes are now spec’d with 28mm-or-larger tires, we did swap to something more familiar for a few rides. This offered even more cornering confidence when things were fast. For us, the slight weight gain in larger tires is worth it, and the bike is still under 15 pounds. Giant has used an oversized 1.25-inch steerer for a while, and the added diameter can plausibly be responsible for the added front-end stiffness. The only downside is that stem options are not as extensive as the more traditional 1.25-inch steerer.

Climbing is rewarded when on such a light bike, and the bottom bracket is very beefy. The Press-Fit 86 bottom bracket that Giant has run for years is known for requiring less maintenance than the 30mm options most of the competition uses while keeping the weight down. Even after riding in the rain and washing the bike a few times, there wasn’t a hint of creakiness.

Overall, the new TCR seems to be an improvement. There are no widgets or funky proprietary gimmicks, just refined engineering and production that offer noticeable weight and performance gains. While we appreciate the ISP seatpost and its added performance, the $5400 Pro model with an adjustable seatpost is probably a better choice for most cyclists, especially when it comes to selling the bike. The Pro level saves you some significant cash, too, but at the loss of the new laser-cut, robotically placed layup, meaning a slight gain
in weight. 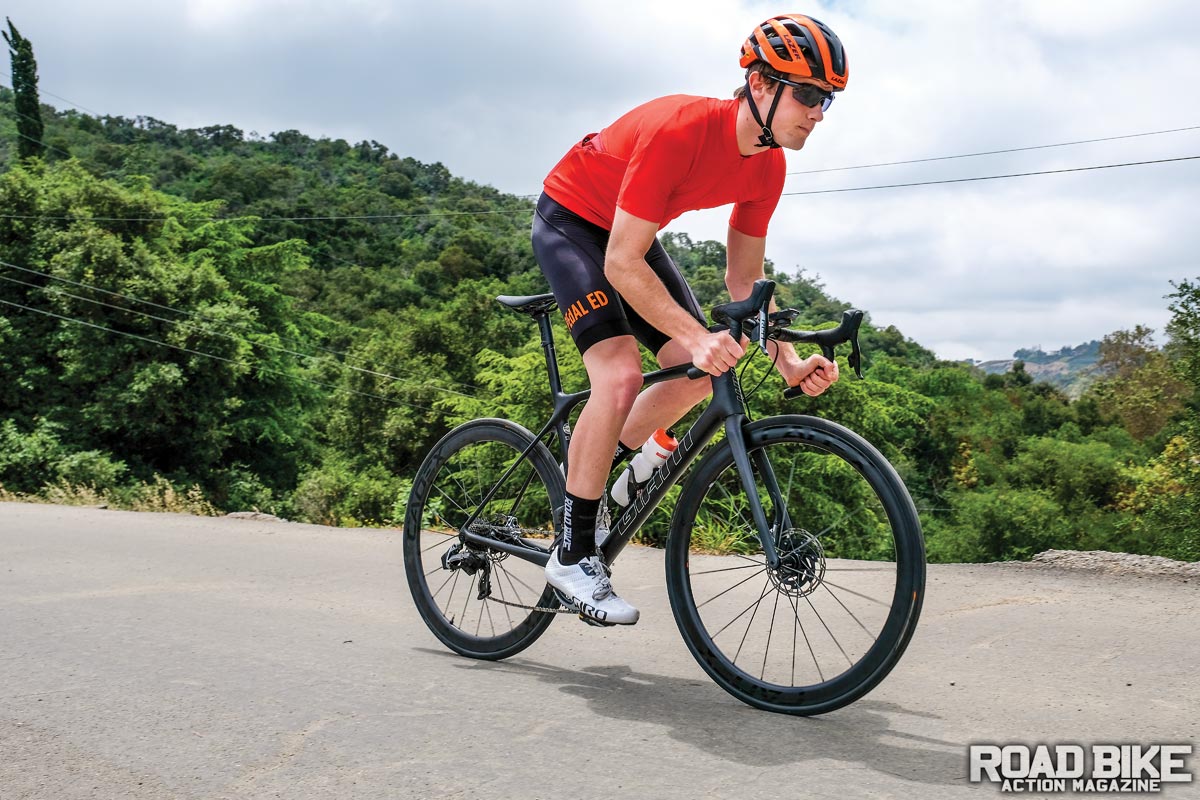 For us, the TCR Advanced SL Disc is still a bargain when you consider the other superbikes that, in addition to exceeding it in cost, also don’t include a power meter, and none include wheels that perform like the Cadex do. At the end of the day, the new ninth-generation TCR continues its evolution with stunning lab numbers, but also, more important, an improved ride performance.

It looks like Giant will have complete bikes starting at $2,000, and if you can believe it, there are even a few with rim brakes. The SL and Pro levels will also have frameset options with disc brakes and an SL with rim brakes.

ISP isn’t for everyone

The wheels are a bonus but need bigger tires

Socks: Save Our Soles RBA