Giant's all-new Revolt gets racier while adding a flip-chip and dropper compatibility. 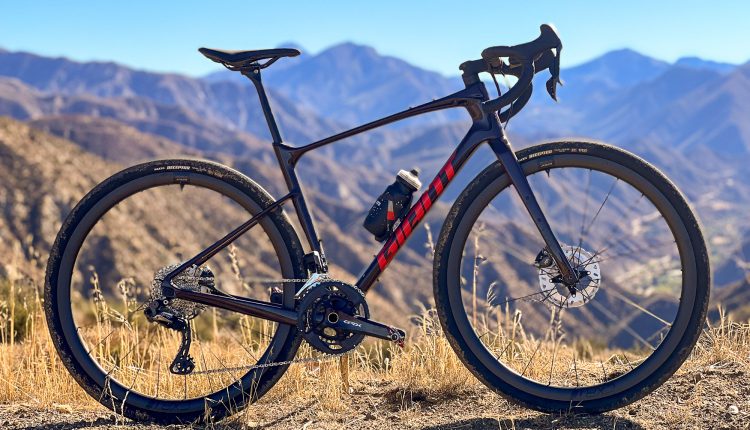 Giant has just launched an all-new version of their gravel bike, the Revolt. The Revolt has been in the Giant catalog since 2013 and was one of the original gravel-specific bikes on the market. A lot has changed since its inception, and while Giant has stayed on-trend, this new Revolt is by far the most significant change yet.

THE BIKE AND BUILD

We got Giants pinnacle model, the Revolt Advanced pro 0, but Giant is also offering an advanced level with the same frame but lower grade composite fork. Our test bike hit the scale at 17.81 pounds, and that includes their new CRX1 carbon wheels. The wheels have a hookless bead and 25mm internal width and are 35mm deep. Giant has a claimed weight of just under 1400 grams for the new wheels. They are paired with the Maxxis Receptor 40mm.

Our bike, like most of the stock builds, is 2x, offering the most gear range. We have the Shimano GRX 815 (Di2) build with a 48/31t matched to an 11-34t cassette. Giant also has a new Contact SLR XR D-Fuse handlebar that they say has the same flex design as their D-Fuse seatpost, but more on that later. Overall the build is solid, and a perfect pairing for a bike meant to be at the front of an event.

Giant has made some significant changes; the Revolt has taken a turn towards the racer type with a 1 degree steeper headtube going from 70.5 to the new 71.5 degrees. There is also now a rear flip-chip offering a shorter and longer wheelbase than previous. On our size medium, the short wheelbase is 102.6cm, and long is 103.6, with the previous version being 103.1cm. The shorter wheelbase and reduced fork trail offer a more responsive ride, while the longer setting helps with high-speed stability. The bottom bracket has also been lowered 10mm to 80mm, helping keep the center of gravity low.

Another update in geometry is the longer reach; on our size medium, it’s 6mm longer at 38.7cm, but the bike is now paired with a 70mm stem rather than the 90mm on the previous version.Giant has also retained their D-Fuse seatpost but now with a twist. The new Revolt frame has a round 30.9mm seat tube but uses a wedge system to accommodate their proprietary post. This means you can now run a dropper post on the new Revolt. Giant still uses the oversized steerer, so if you want a different stem, remember it needs to be 1 ¼, not 1 ⅛.

To be honest, we have spent most of our time in the short wheelbase setting, and the bike is responsive. We never spent much time on the older Revolt version, but this is definitely for a new audience. The bike has a claimed tire fitment of 42mm in short and 53mm in long, but bigger will fit on both. The rear flip-chip feature is easy to change, but it’s not a roadside adjustment, so pick your setting before heading out.

We felt like the bike was incredibly stiff and transferred power efficiently. In the saddle, the D-shaped seatpost did wonders for in saddle compliance. Giant claims 20% more compliance in the post alone, and we’ll trust them. This is all in the rear and with room to run larger tires than the 40mm Maxxis, which means more rubber could make it even better.

The front end of the bike, in our opinion, is a different story and is a bit harsh. Racers and those coming from the road will feel right at home, but on our long, very bumpy fire roads, we were left with sore palms. Giant claims the Pro version fork has more compliance than the lower level Advanced, and if that’s the case, then new bars or much more rubber might be needed for many riders. The D-Fuse carbon bars seemed to have little to no compliance, in our opinion.

On smoother and faster sections, the Revolt did truly feel and perform well. Even on the tarmac and in group rides, we had no trouble keeping pace. This could be partly because the 2x GRX drivetrain offers smaller gear gaps and a great gear range when the road pace is fast, or the gravel pace is slow.

The long geometry feels very similar to the previous version but with a lower center of gravity and slightly more responsive handling, but only slightly. The steeper headtube has made both the short and long position trail numbers smaller, which is reflected in the handling, but mainly in the short setting. 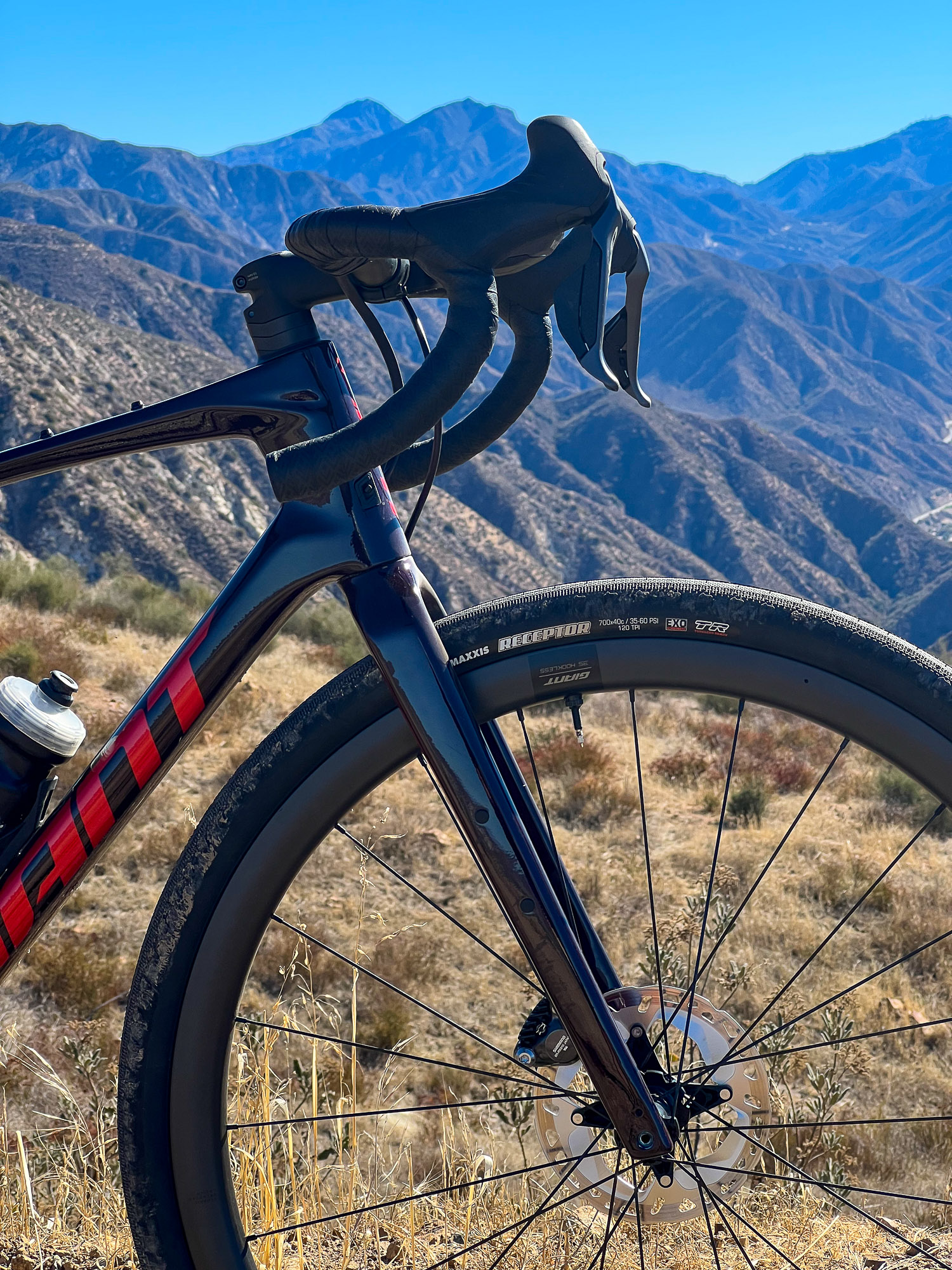 To wrap it up, the new Revolt Advanced Pro offers more responsive handling for all but is catering to the race with the new flip-chip rear end and shorter position. For those that like the long and more stable position, you can now run a dropper post too, but you will definitely want more rubber to aid in compliance. Most of the stock builds look to be 2x, which we prefer for a “race bike,” but a 1x build is preferred by many for its simplicity.

As the world’s largest bicycle manufacturer, we have always been impressed with the value Giant offers. We were impressed that our pinnacle model with Shimano GRX Di2 and the new carbon wheels was only $6200. There are two Advanced Pro versions and four Advanced versions starting at $2300. Giant also mentioned that there would be an alloy version, the Revolt 2, for $1400.

For more info on the new Revolt line, head to www.giant-bicycles.com 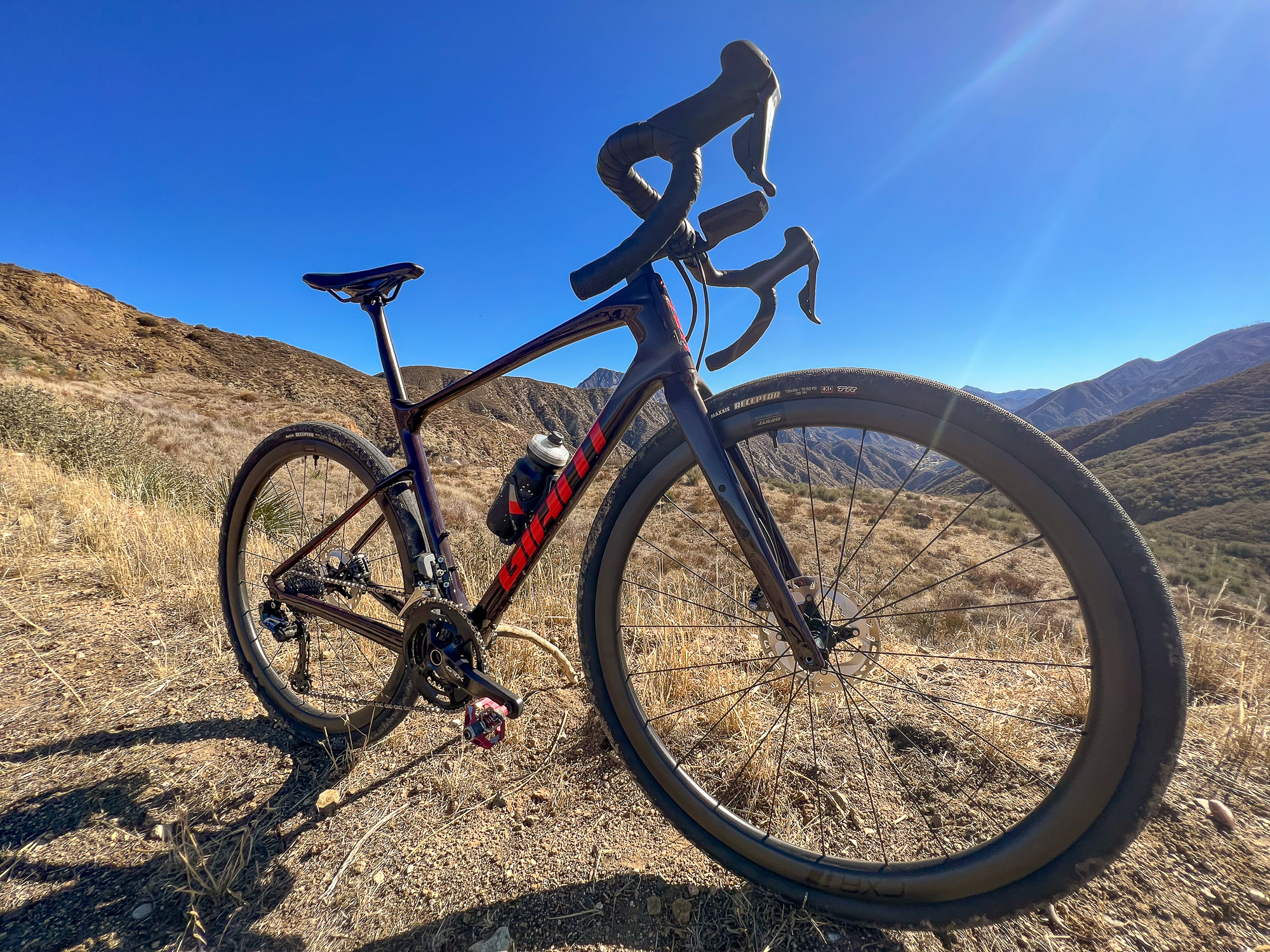