Defending champion Tadej Pogacar of the UAE Emirates team launched a blistering attack on a late climb to win stage six of the Tour de France and reclaim the overall leader’s yellow jersey on Thursday. He then warned his rivals he couldn’t wait for the mountains, with a first summit skirmish expected on stage seven Friday.
Pogacar attacked on a steep climb 200 meters from the finish here and was a class above his key rivals Jonas Vingegaard of Jumbo and Adam Yates of Ineos, who are now 31 seconds and 39 seconds behind him in the standings.

“It feels like the first time I had it,” Pogacar said while pulling at the yellow jersey he last wore on the 2021 final podium beneath the Arc de Triomphe in Paris.

“It was a real battle to get it again,” he said.

A battle he seemed to win with relative ease however as the Slovenian took the overall lead ahead of EF’s American rider Nelson Powless thanks to the 10 bonus seconds on offer for the stage winner.

“I believe in myself, the cobbles went well yesterday, today too, but tomorrow will be the biggest test of the Tour so far,” Pogacar warned of Friday’s climb to the storied Planche des belles Filles mountain summit. The 23-year-old celebrated this win by repeatedly punching the air and is in prime position in his bid to win a third consecutive Tour de France. He beat Australian Michael Matthews into second on the day while David Gaudu of FDJ was third and Briton Tom Pidcock fourth. On his rookie Tour de France Ineos rider Pidcock, 22, will wear the best under-26’s white jersey Friday, although Pogacar leads him in those rankings. 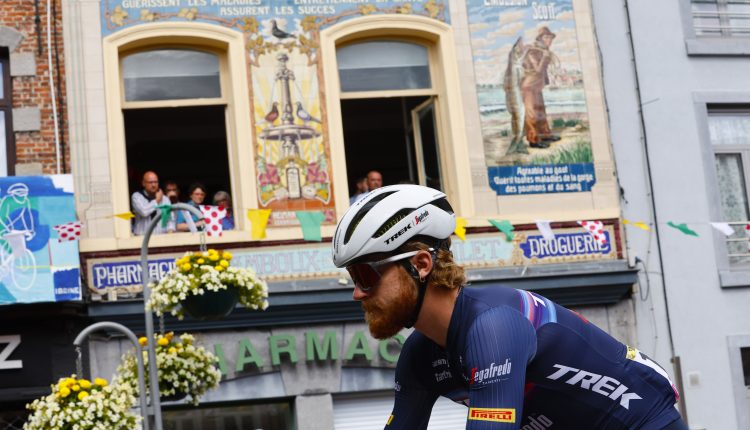 Quinn Simmons signing on for an eventful day for the Tour's youngest rider. 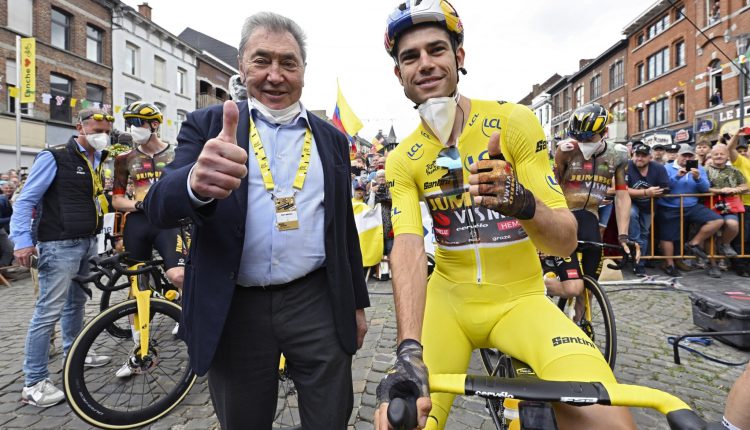 Eddy Merckx greeting Wout Van Aert ahead of the stage 6 start in Belgium. 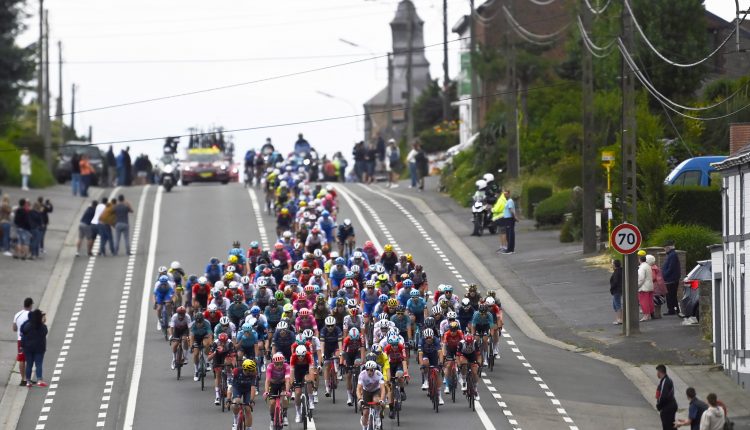 The 136 mile stage started off as one of the fastest in Tour history. 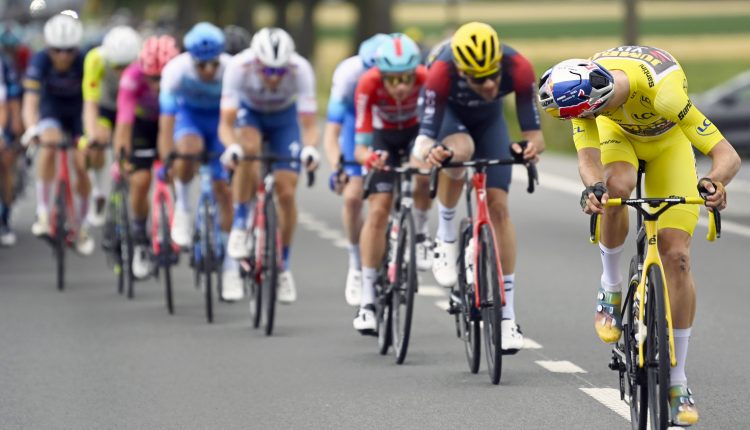 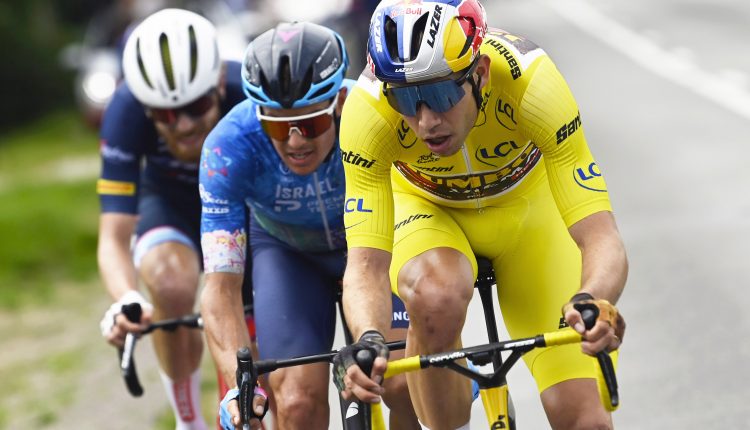 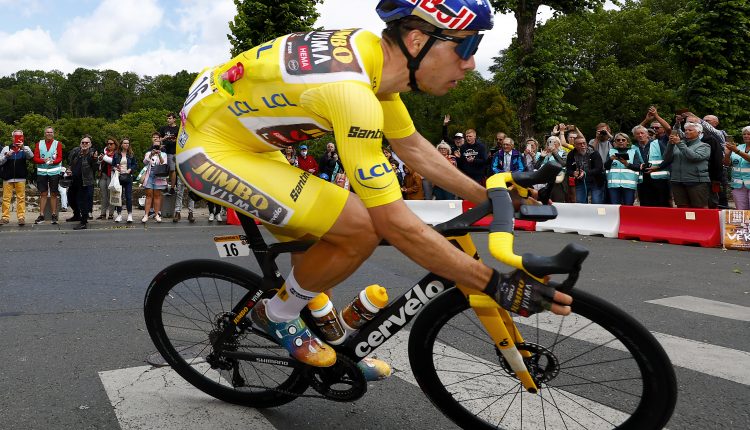 Eventually, Van Aert went solo but was caught by a hard chasing peloton. 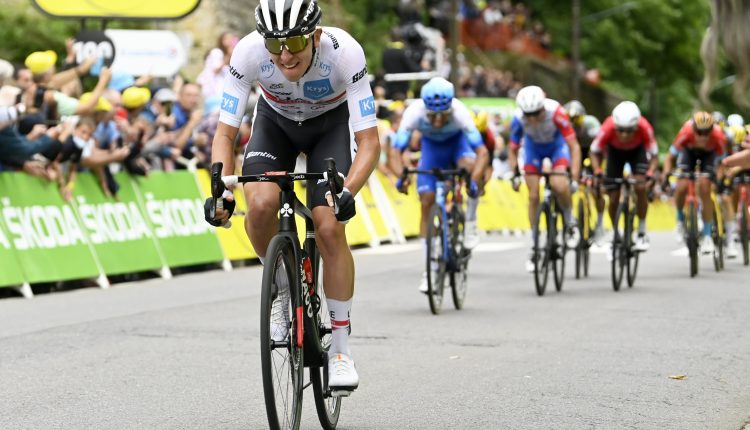 Tadej Pogacar rocketed past his opponents in the final 200 meters. 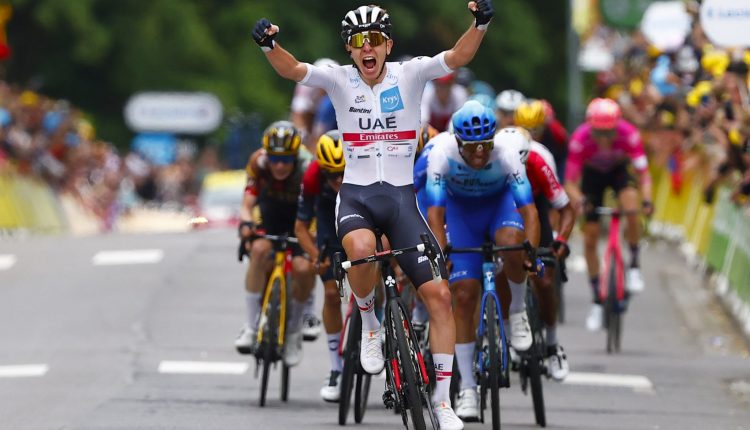 The stage win time bonus boosted Pogacar to the top of the overall standings. 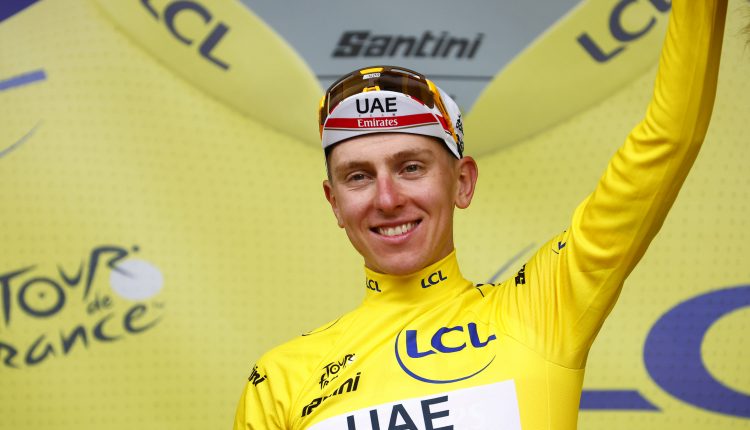 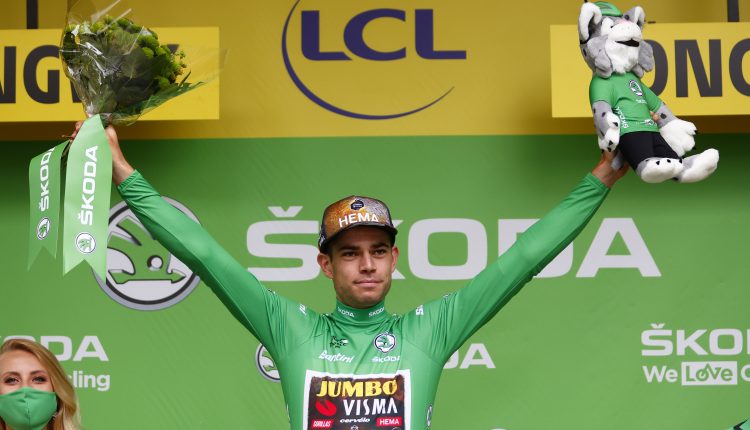 Van Aert swapped yellow for green.
Prev 1 of 10 Next

Overnight leader Wout van Aert paraded the yellow jersey through Belgium before launching an eventually doomed but rampaging attack through 70 miles of rolling forest terrain before being caught under 10 miles out. Van Aert will race Friday’s stage in the green sprint points jersey instead and will have won many fans for his swashbuckling attitude. The 27-year-old Belgian also won the day’s red jersey as the most aggressive rider after his 75 mile breakaway, and leads those rankings in the overall.

“I wanted to remember my last day in yellow,” said Van Aert, who has a stage win and three second places to his name on the 2022 Tour. “I also wanted to give the fans something to remember me for.

“It was an intense day but I’m happy to change jersey,” he said after picking up the green one.

Magnus Cort Nielsen of Denmark retained the polka dot jersey he claimed on stage two and which saw him cheered wildly along the Danish roads.

“I’ll try and keep it one more day, but I’ve already given so much,” said the EF rider.

On Friday the Tour takes on the terrible 24 percent gradient on the gravel climb to La Super Planche des Belles Filles in the Vosges mountains but the race leader seems undaunted.

“My family will be there and my girlfriend will be waiting for me, so I can’t wait,” said Pogacar.

“Tomorrow we enter the climbing part and we are in a good position to defend the yellow.”