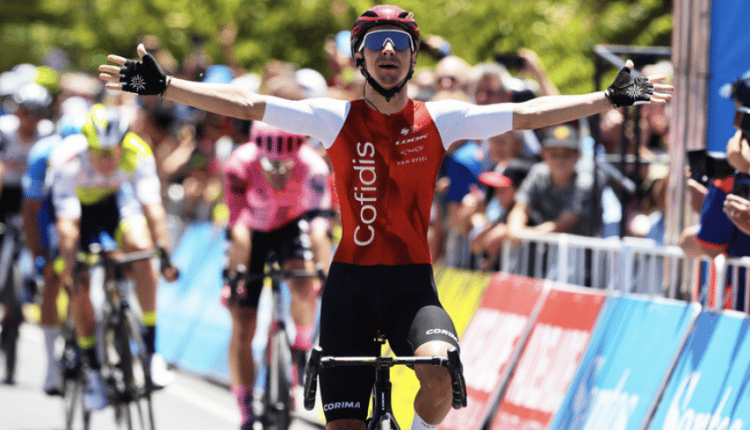 Frenchman Bryan Coquard jubilantly broke through for his first World Tour win in 10 years as Jay Vine maintained his overall lead after the fourth stage of the Tour Down Under on Saturday. The lightweight Coquard (Cofidis) dashed to the front in Willunga’s main street to sprint away with the penultimate stage after 83 miles ahead of Italy’s Alberto Bettiol (EF Education EasyPost) and France’s Hugo Page (Intermarche Circus Wanty). Australia’s Vine (UAE Team Emirates) held on to his 15-second advantage in the general classification heading into Sunday’s fifth and final Unley to Mount Lofty stage over 70 miles.

Vine, well protected by his UAE team from the buffeting crosswinds during the fourth stage, leads from Britain’s 2018 Vuelta a Espana winner Simon Yates (Team Jayco-AlUla) and Spain’s Pello Bilbao (Bahrain Victorious). Coquard, who had 48 wins before Saturday’s stage, excitedly greeted his breakthrough World Tour victory in the TDU.

“It’s been a long time, I wait 10 years for this win, my first one in the World Tour,” Coquard said.

“I am very proud and very happy. I have won a lot of races, but never in the World Tour.

Rivals tried in vain to catch out Vine and the Tour Down Under ochre leader’s jersey but he was well protected by four UAE Team Emirates teammates.

“It was very stressful today. There was one point that I thought we were going to have an easy day and 45 km in it was just on and it was on until the end,” Vine said.

“It’s good, we have an amazing team, we had six guys in the front group helping me and there were clear instructions from the team car.

“I haven’t been counting any chickens before they’re hatched and we’ve now got through this day, but arguably tomorrow is the day when we’ve got the stronger team for the Mount Lofty finish.”

The peloton will climb the short but steep Mount Lofty summit five times on a circuit course above the city of Adelaide.

Vine is enjoying an outstanding Tour Down Under debut, three years after he could not make the national team for the race. He has gone from strength to strength since earning a World Tour contract, winning two stages last year at the Vuelta a Espana and then claiming this month’s national time trial championship for the first time. American Magnus Sheffield (Ineos Grenadiers) finished safely in the front bunch to retain fourth place overall 45 seconds behind Vine and one second ahead of Swiss Mauro Schmid (Soudal Quick-Step).

TOUR DOWN UNDER STAGE 4 RESULTS