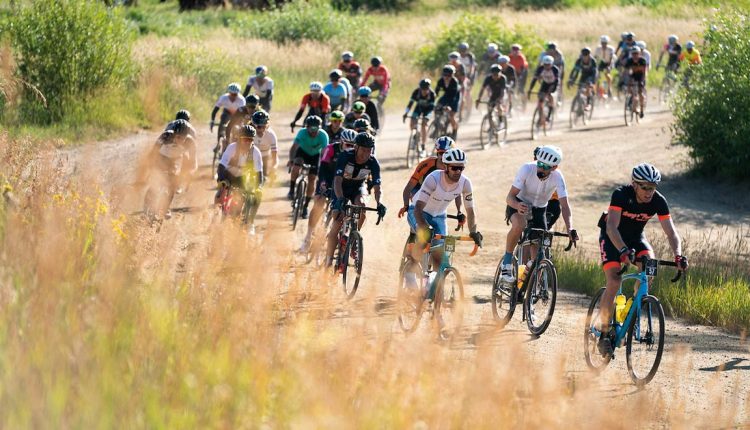 Last weekend I competed in the best gravel race I’ve ever entered, the SBT GRVLrace in Steamboat Springs, CO. From the level of organization to the remote, scenic areas we raced through, and the feed stations to the after-party, it was a tremendous event and one I highly recommend for anyone.

The event had three courses, modeled after the difficulty scale of ski resorts and mountain bike trails: Black (141 miles), Blue (99 miles) and Green (37 miles). The Black course, which I rode, was more technical than many flat to rolling gravel races and features extended descents with loose gravel. Those will get your attention! The majority of the roads – mostly gravel with a few paved road connections – were hard packed and fast, to the point I rode 35c tires on my Pinarello Grevil and never felt I was at a disadvantage due to tire volume.

The organizers – Mark Satkiewicz, Amy Charity, and Ken Benesh – designed a fantastic and thoughtful course that took us back into remote areas you normally wouldn’t get to see on a mountain biking or hiking trip to Steamboat. It was great to see another side of that incredible countryside. They also used lollypop loops that brought riders through the same feed stations more than once. This small detail can – and did – have a positive impact on rider experience because it means the event can focus on making fewer feed stations more comprehensive, rather than spreading their resources out across a larger number of locations.

Speaking of feed stations, the number and frequency of stations (every 20-25 miles) at SBT Gravel meant I could drink a full bottle at the aid station and take two full bottles with me, eliminating the need to race with a hydration pack. This is definitely different than some other gravel events that limit the number of feed stations in order to increase athletes’ self-reliance. Both styles have merit, they just require different planning.

And of course, riders returned to Steamboat Springs for a finish line festival, cold beer, and a great meal. The buzz was great, and even with high-profile riders in town to compete for equal prize money in the men’s and women’s fields, the atmosphere was friendly, supportive, and positive. I asked CTS Coach Nina Laughlin, who finished fifth in the women’s pro race, about SBT’s effort to encourage greater female participation and a higher level of competition:

“Of all the gravel events I’ve done, I really appreciated the huge push that SBT GRVL made to include so many women in the event. The difference was noticeable, and I hope that SBT GRVL’s push for parity inspires other events to do the same. As a woman, looking around and seeing so many other women was a welcome change and made me feel valued, and it definitely lowers the intimidation or “fish-out-of-water” factor that can be present at so many male-dominated cycling events. I personally benefited from the equal prize money and a stacked women’s field that made for more dynamic racing than some other gravel events that I’ve been to. The level of competition at SBT GRVL has inspired me to up my game and train even harder for next year!”

Whether you come to race SBT Gravel in 2020 or prepare for another gravel event, here are some tips from my experience in Steamboat, Dirty Kanza 200, and others:

Take the time to figure out what kind of pre-race breakfast works for you. There’s no perfect formula, but I think one of the keys is to avoid overeating. Even though the day is going to be long and you’ll burn a ton of calories, stuffing yourself with a huge breakfast isn’t going to give you the energy to make it through the day. That comes from the glycogen in your muscles, the fat you’re carrying around, and the food you eat during the race.

Keep breakfast to a moderate size. Personally, rice and eggs works well for me, with some toast and coffee. I prefer to start events on the borderline of feeling hungry. That way I can start eating right away on the bike without overloading my system. If you have food in your pockets and feed stations, you can easily consume more calories if you underestimate your needs. But if you overestimate and end up bouncing down the road with a full stomach, there’s not much you can do but feel nauseated and wait until it digests.

It’s tempting to roll slowly off the start line of a 140-mile gravel event that’s going to take 8+ hours, but it pays to go out hard – at least for a little while. With the pros leading the way, the start at SBT was fast, and I worked to stay in the front groups through the first feed station. You want to use the speed of those groups to put some good miles behind you and stay with people you can work with later. If you start too conservatively, you’re likely to be the strongest rider in the groups you’re with, meaning the other riders aren’t much help. 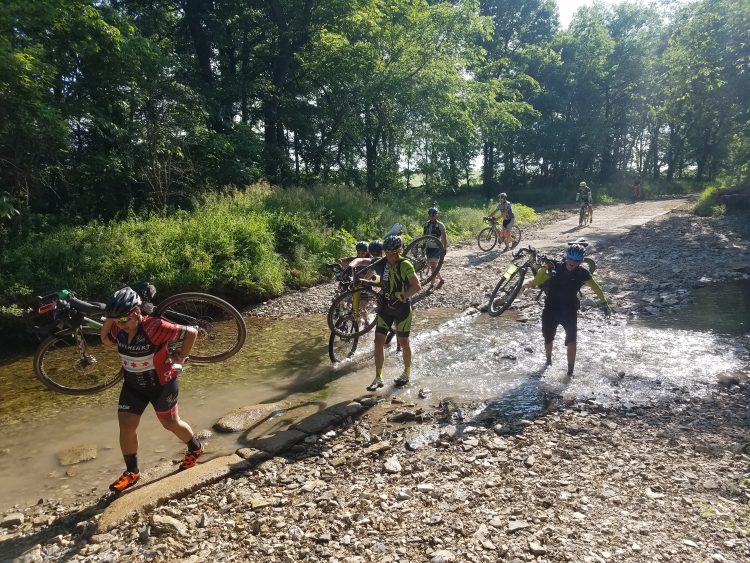 But keep your ego in check

As the front groups start to split up, it’s important to avoid burning too many matches trying to ride above your level. It’s going to be a long day, and digging too deep too early will come back to haunt you several hours later. As an old bike racer, my instinct is still to do whatever is necessary to stay on the wheel, but a number of times I had to consciously decide to let the wheel go. It’s a balancing act; going out hard enough to get into good groups, but then knowing when to back off to conserve strength for later.

Top up at feed stations

If your finishing time is important to you, don’t spend a lot of time in feed stations, because you’re just giving back time you earned on the way there. To keep my stops short, I fill and drink a bottle of plain water, and then fill one bottle with Fluid Performance sports drink and one with water, grab Muir Energy Gels and ProBar Bolts, and leave. I eat on the bike while rolling rather than standing around eating at the feed station, but I drink a full bottle because it’s kind of a way to leave the feed station with three bottles (one in my gut and two on the bike).

The speeds in gravel racing are sometimes relatively slow because of the loose surface. The climbs can get very hot. By separating hydration (water and electrolyte drinks) from energy (gels, chews, other foods) you can adjust your fluid intake based on intensity and temperature without overloading your gut with calories. This dramatically reduces the chances for gastric distress during long endurance races.

The variable road surface in gravel racing demands your constant attention, and there will be some sliding and drifting going on. The more tense you are, the more the gravel will beat you up, and the more likely you are to overcorrect for a slight drift or bobble and make it worse. Let the bike find the line, stay nimble in the saddle, and keep your upper body loose and relaxed.

The handling skills for gravel take practice, even if you’ve been riding the road or mountain bike for decades. The more experienced you are on road or trail, the faster you’ll pick up the skills for gravel, but you still need practice. This is particularly true for SBT Gravel, because of the longer descents. You pick up more speed than you do in the shorter, rolling hills of Kansas or other gravel events.

Long gravel races are not something you want to just sign up and show up for. Each race has different logistics to consider, and there’s less standardization in the gravel racing community compared to road, track, and cross-country mountain bike racing. Races have slightly different rules, different philosophies on feed stations and mechanical assistance, and of course, different terrain.

For SBT Gravel, I organized a recon camp in Steamboat the week of the event. We rode parts of the courses, learned as much as we could about the race, practiced skills on the terrain we were going to race on, and talked strategy. We’ll be hosting a similar camp in 2020 – which includes an entry to the race (sold out in 6 days this year) – and extending it to be a full week leading into the race. Here’s more information and registration for that camp!