What beginners can expect with bikes under $2500 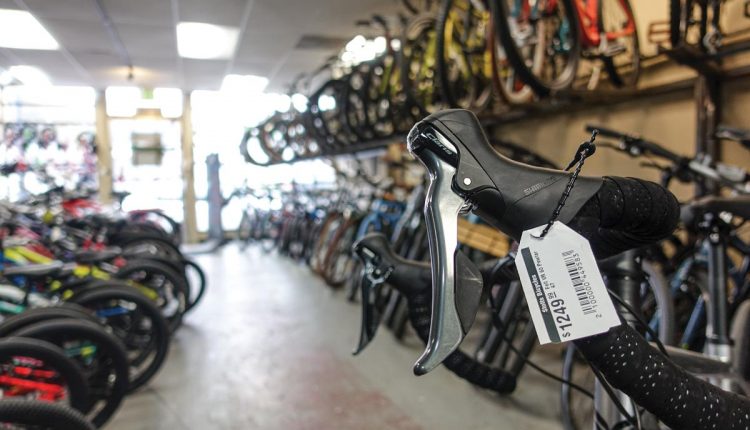 Whether it’s the beginning of a deep dive into the sport or an upgrade for someone looking for something faster to ride, a budget road bike is central for many beginners cycling experiences. There have been a handful of updates across the cycling industry recently; more than any other feature, the latest road bikes on the market have undergone a series of compliance-oriented design cues, led by the quick adoption of disc brakes.

Wider tire clearance and hydraulic disc brakes are now becoming more common on most bikes starting at $1500. We’ve talked about the performance upgrade hydraulic brakes provide, and they have long been a premium-only option. Now the majority of modern bikes between $1000–$2500 feature disc brakes. Although we’d only recommend a bike with disc brakes, in part due to its ability to be upgraded in the future, budget bikes with rim brakes still exist and can be found at prices that start below $1000.

Most road bikes in this price range typically have frames made of three materials—carbon, aluminum or steel. Many budget steel bikes tend to use rim brakes with disc brakes reserved for higher-end frames. Aluminum frames are the most common at this price point due to the material’s attractive cost/benefit ratio and its stiffness-to-weight ratio. Aluminum frames also have tunable ride characteristics at a lighter weight than their steel counterparts. Generally, carbon frames trend closer to a $3000 price point.

Expect any carbon bike at this price point to feature entry-level components to balance the higher cost of the frame, while comparably priced aluminum frames are to be paired with higher-value components. Of the eight bikes shown here, seven feature aluminum frames, and all use components from Shimano.

Shimano offers the most advanced disc brake/drivetrain package at this price point. Shimano’s latest updates to their mid-level Tiagra drivetrain have seen the adoption of a hydraulic brakes alongside an 11-speed mechanical drivetrain. Shimano’s updated Tiagra gruppo surpassed SRAM’s previously comparable Apex drivetrain, which has remained largely unchanged for nearly a decade with a 10-speed rim brake group.

Shimano 105 ranks just above the Tiagra group and has gained notoriety as Shimano’s workhorse drivetrain. Hydraulic disc brakes have been standard in the group for five years, and it is now Shimano’s highest-tier mechanical shifting drivetrain since Ultegra and Dura-Ace made the jump to wireless shifting.

Shimano’s entry-level Sora groupset is disc brake-specific but is still 9-speed with a mechanical disc caliper. Most other major manufacturers’ disc-brake drivetrains, like SRAM’s AXS wireless series and Campagnolo’s Chorus, Record and Super Record, are priced far outside of budget-level builds.

At this price point components like handlebars, stems and seatposts will likely be made of aluminum. Often, entry-level bikes are using trickle-down frames with features that have lost commercial appeal (like rim brakes). Another distinguishing feature of price points would be internally routed cables, which have become the aesthetic of high-end frames but are not as universally found at lower price points.

If you’re a first-time rider, remember that road bikes are often sold without pedals, too, so you need to decide whether you’ll be going with flat pedals or jumping to a clipless system, which involves special shoes.

Wheels at this price are exclusively aluminum, and many have yet to receive many modern features, like wider rim shapes and tubeless compatibility. This is likely the first and most impactful upgrade one can make to most budget builds to improve a bike’s performance. Saddles remain relatively basic as well, though some manufacturers are equipping shorted-nosed saddles on entry-level models.

The most unfortunate point to consider in purchasing an entry-level bike these days is that there are so few in stock. Sure, you can still browse for used bikes online and find a few deals, but even the secondhand market remains competitively priced.

However, local bike shops may have bikes in stock that cannot be found online or have the ability to special order them for customers.

After spending countless hours scrolling online and badgering your bike riding friends for useful tips and advice, there is one useful exercise to conduct before you make a purchase—look in the mirror.

This is the moment when you need to actually think about not only what bike you want, but also what bike you need. What are your goals as a cyclist? We’ve encountered many cyclists who’ve purchased more bike than they need due to nudging from friends and shop employees. Remember that road bikes in this price range are just as capable of delivering mile after mile of enjoyable riding as their more expensive brethren.

And last, don’t roll out on your new bike without the basic necessities—a helmet, spare tube, tire iron, a water bottle and a taillight. 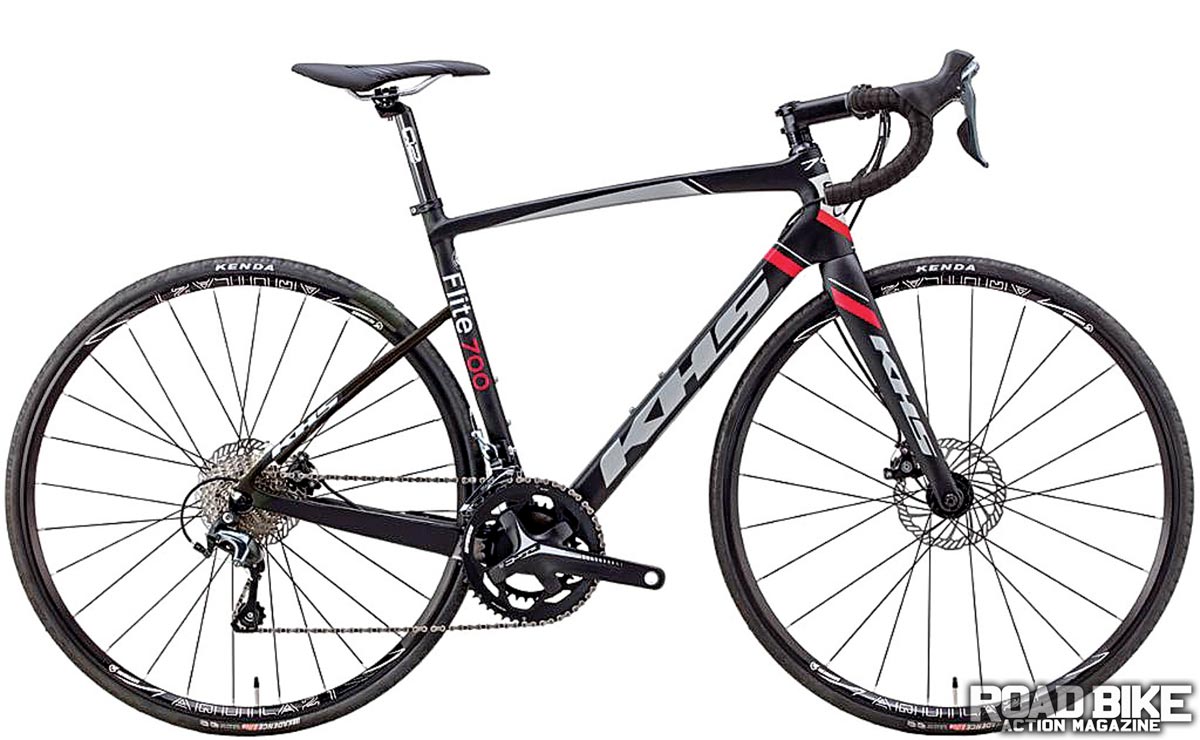 KHS has a long legacy of producing value-based bike builds. The latest Flite 700 is no different, as it brings a carbon frame to the sub-$2500 price point. Its monocoque frame design and performance-oriented geometry provide quick feedback and responsive handling. An FSA Omega 50/34 crankset is paired with a Shimano Tiagra drivetrain with cable-pull brakes that oozes value. 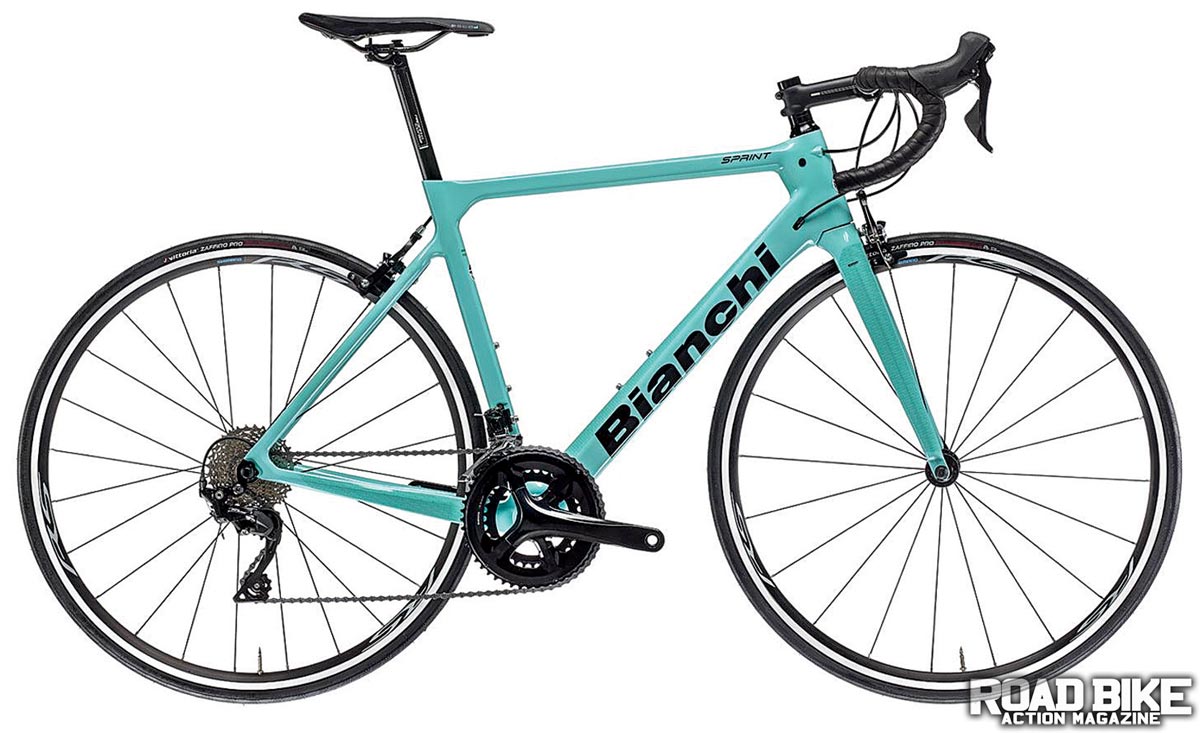 As the oldest bicycle brand in the world, Bianchi is revered by many and easy to spot with their popular Celeste paint jobs. We were pleased to find the iconic hue on the alloy Sprint frame. It’s the most affordable performance road bike in Bianchi’s catalog, thanks to the Shimano 105 drivetrain. The Sprint is spec’d with 25mm tires and has clearance for up to 28s. Handling remains quick but predictable with its tight wheelbase and average head tube angle. 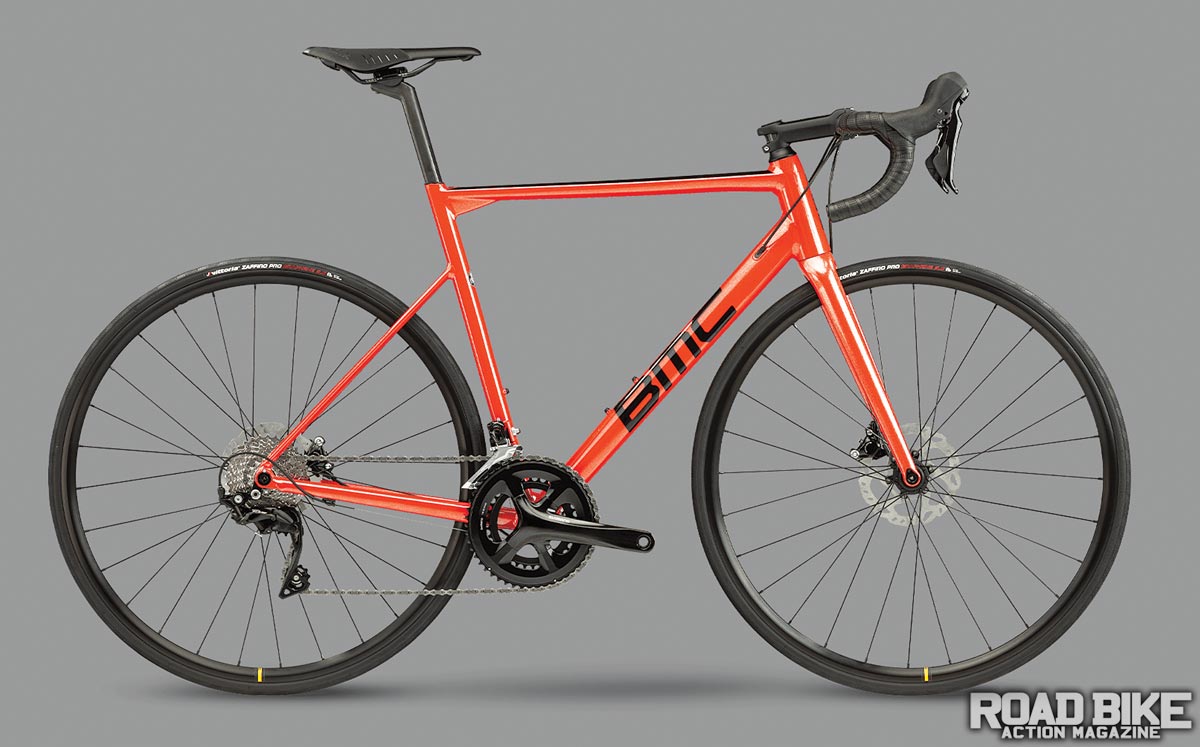 Sharing many of the same characteristics as its carbon cousin, the aluminum Teammachine ALR is designed for performance. BMC included a Shimano 105 drivetrain, which complements the snappy handling of the aggressively short wheelbase. The 28mm max tire clearance is a bit narrow, but the carbon seatpost helps with compliance in the saddle. 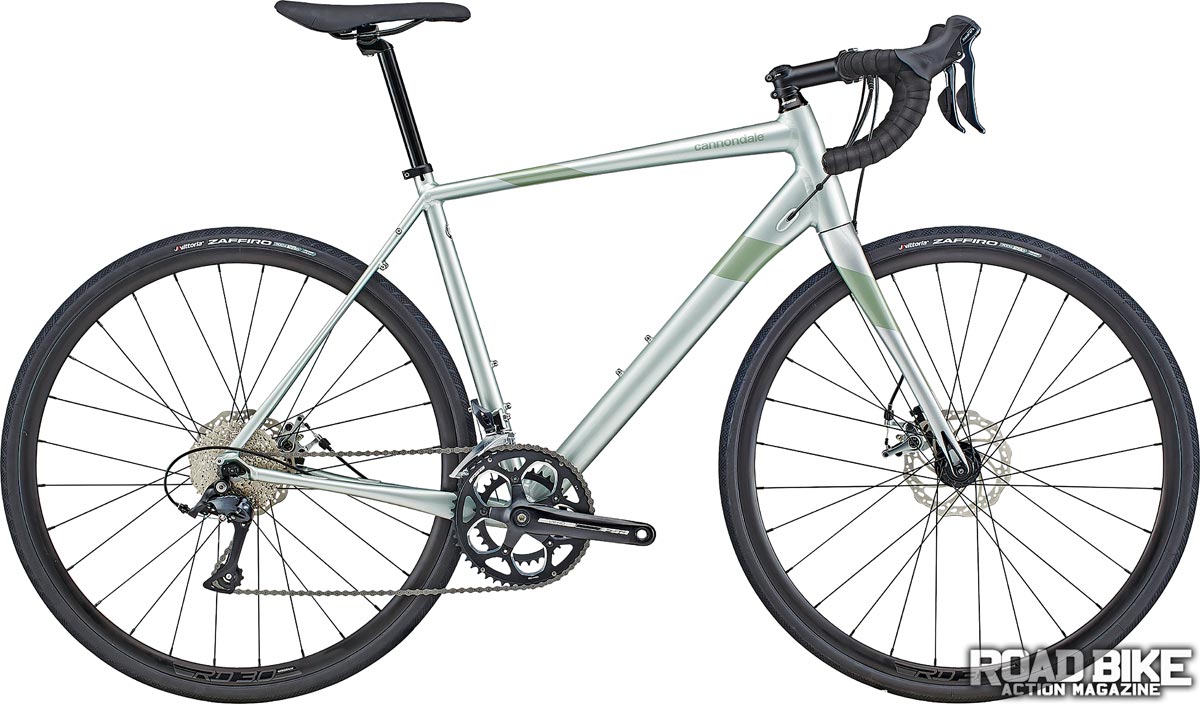 Cannondale’s Synapse touts an endurance geometry with its aluminum frame and carbon fork. This makes it an ideal purchase as a beginner’s gran fondo bike or anyone looking for a more upright riding position. The 9-speed Shimano Sora shifting will get the job done with just a few big jumps in between the wide 11-34 cassette. Notably, cable-pull disc brakes are still common at this price point. 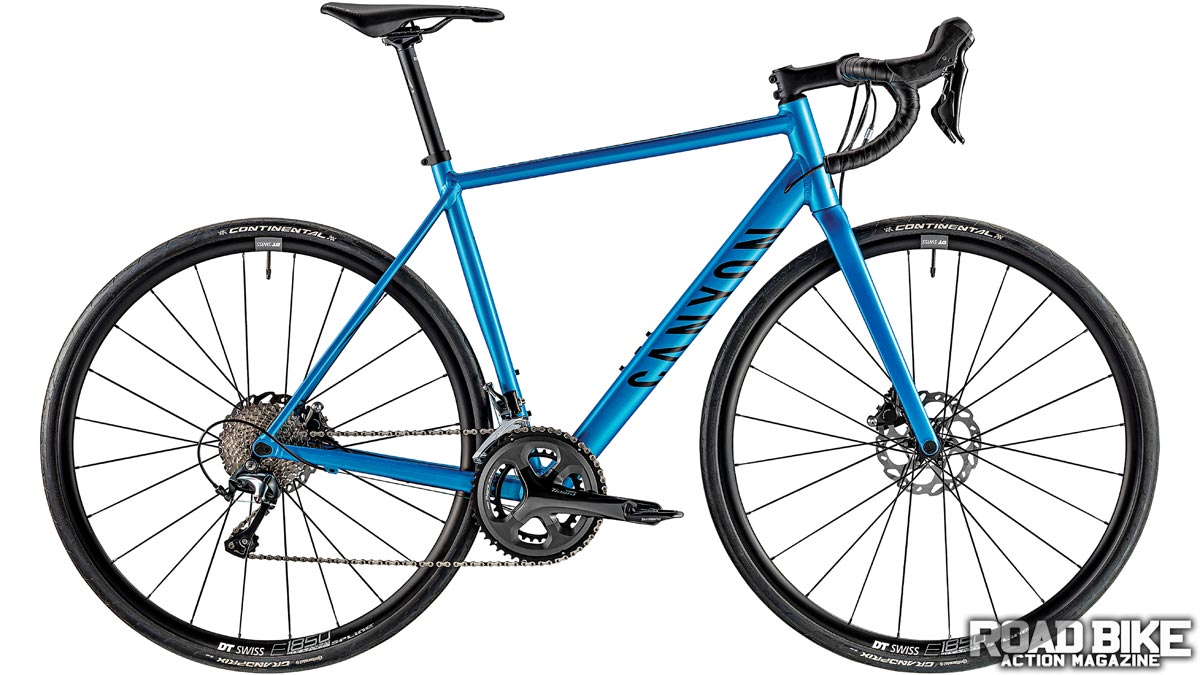 The direct-to-consumer model has its benefits and Canyon has gained popularity for their low-cost road bikes. Canyon’s aluminum Endurace AL 6.0 is their entry-level model. The 10-speed Shimano Tiagra drivetrain offers much of the same performance as 105 with similar ergonomics as well. DT Swiss E1850 wheels sweeten the deal with the brand’s popular performance characteristics. Canyon’s carbon Endurace builds start at $2600. 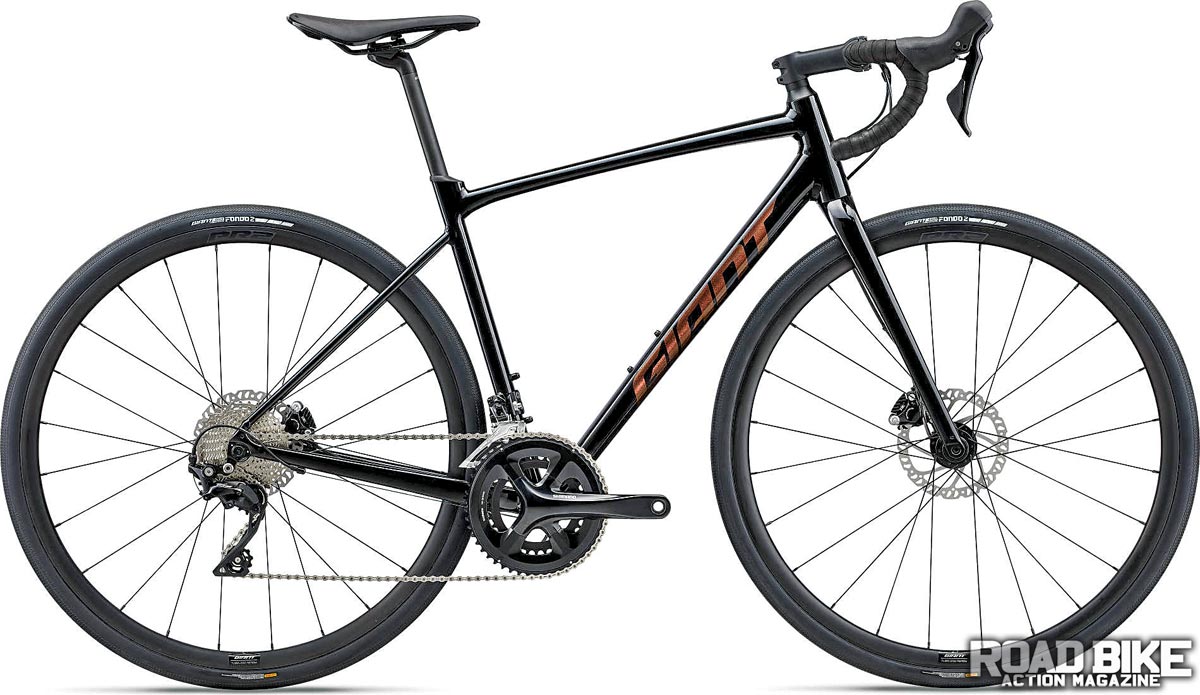 Giant’s entry-level alloy road bike, the Contend AR, takes the “all-road” approach with a long wheelbase and all-rounder 32mm Giant Gavia tires with clearance for up to 38s. As the largest bike manufacturer in the world, Giant’s Contend provides serious value with a Shimano 105 spec. Most of the small parts come from Giant, notably the carbon composite seatpost and forward-thinking tubeless-compatible wheels. 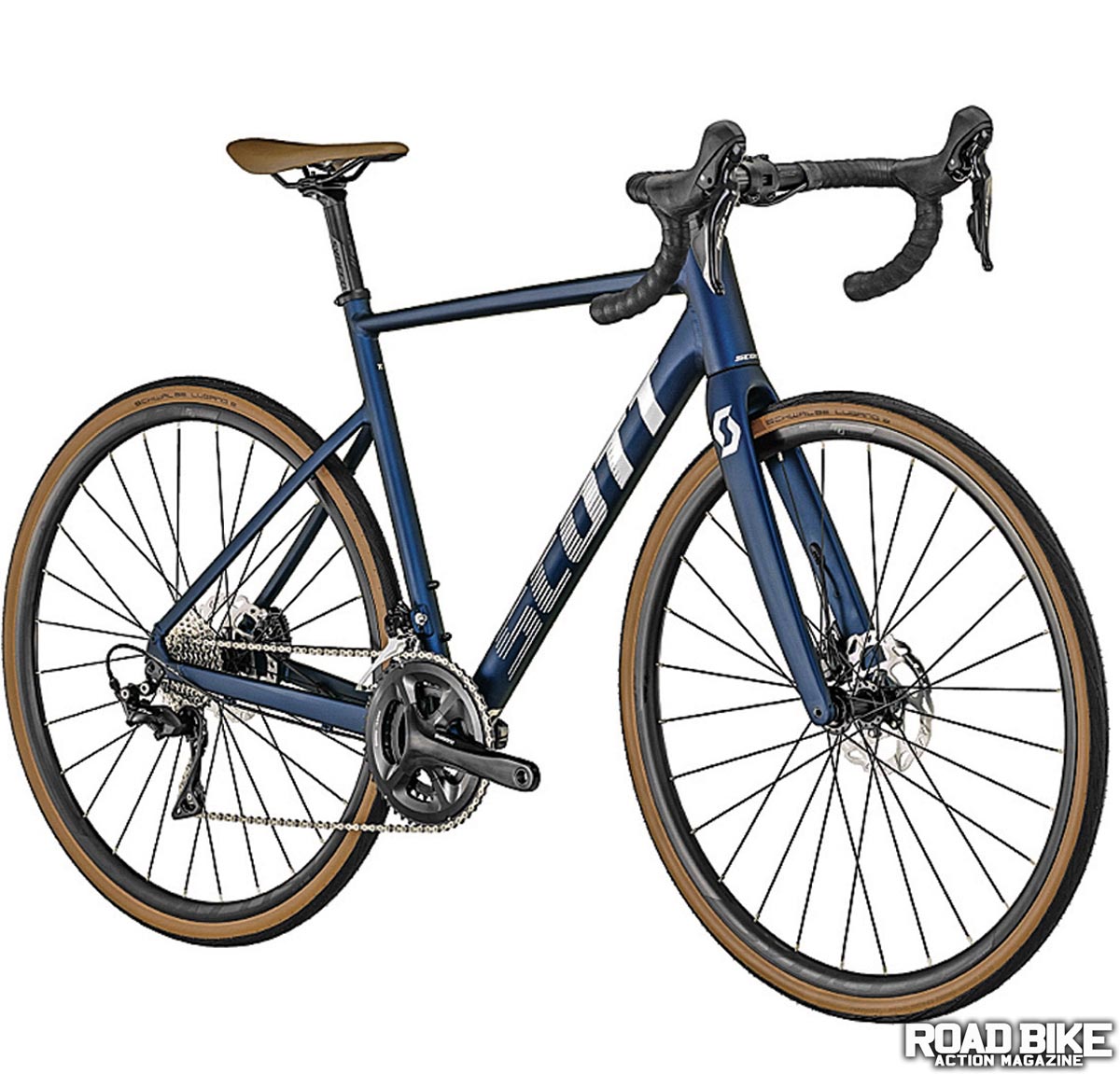 Scott Speedster line has undergone a premium facelift with fully internal routing front to back. The design gives the alloy Speedster a clean aesthetic generally reserved for high-end carbon frames. The Shimano 105 drivetrain provides reliable shifts, and the in-house Syncros parts help balance out the price. 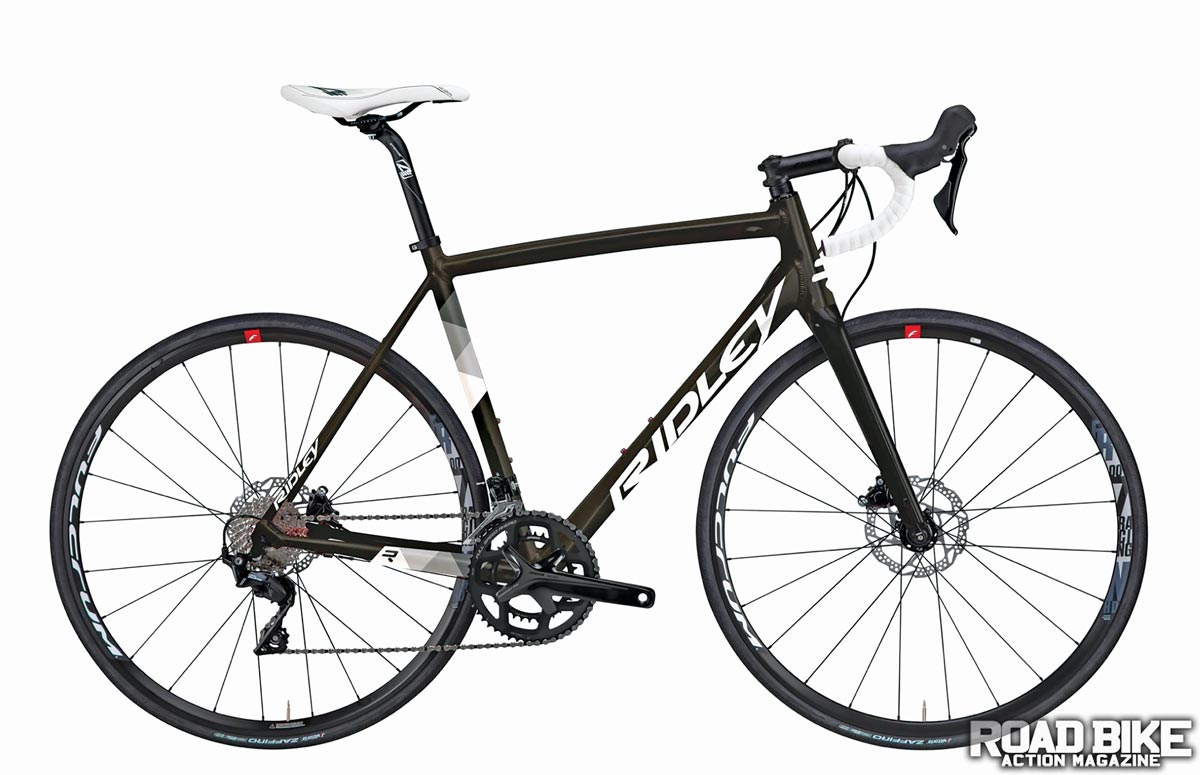 The Ridley brand comes from the cycling Mecca of Belgium, and the Fenix SLA was designed alongside their race bikes as an endurance-oriented frame that doesn’t skimp on performance. Shimano’s 105 drivetrain brings quality components to the alloy frame, but the max 28mm tire clearance is a bit modest. Ridley’s carbon Fenix lineup starts at $3000