Being There: Inside Mavic’s Rim Factory 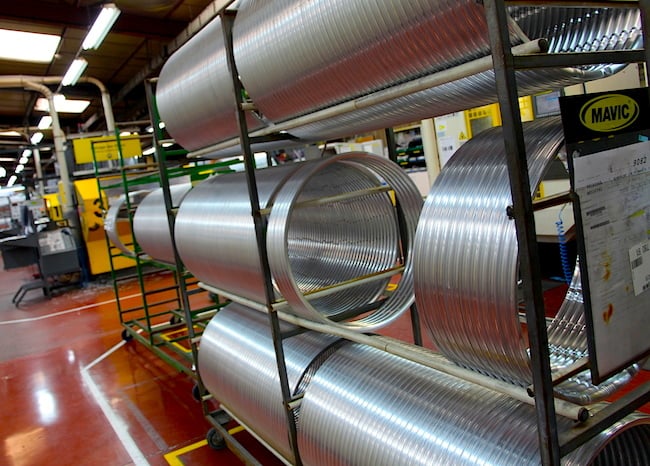 This year marks French cycling components maker Mavic’s 125th anniversary, and the company is celebrating in a variety of ways. First off, Mavic invited Road Bike Action to a gala in Lyon, France, featuring guest appearances from some of the brand’s currently- and previously-sponsored pro racers as well as a showcase of historical items and old prototypes parts from the French brand’s archive (see RBA‘s coverage here. In addition, Mavic has unveiled several special edition products to showcase legacy of crafting new technologies for cycling, including new wheels and clothing. Scroll down for information on the new Ksyrium 125 wheel and our first ride review. But first, come with us as we take a tour of Mavic’s rim-manufacturing plant in St. Trevier, France. 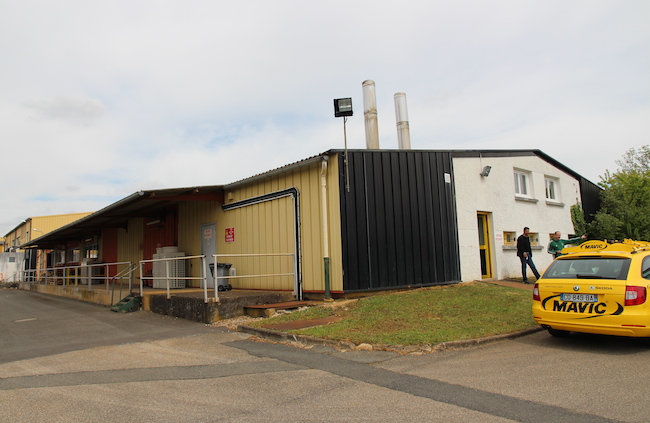 A PEEK BEHIND THE CURTAIN: INSIDE MAVIC’S ALUMINUM RIM FACTORY
A rather sleepy town outside of France second-largest city, Lyon, St. Trevier-sur-Moignans is home to several inconspicuous warehouses and factories, including Mavic;s aluminum rim-making facility. Of Mavic’s approximately 400 worldwide employees, the St. Trevier facility is home to about 70 and exclusively manufactures most of Mavic’s aluminum rims. ‘Approximately 90% of Mavic aluminum rims are produced here, with the other 10% being made in Asia,’ said Mavic’s Michel Lethenet. ‘And this 10% is made up mostly of Mavic’s more entry-level wheels not suited for high-performance road cycling and mountain biking; those are made here in St. Trevier.’ Mavic’s carbon rims are designed and prototyped at the company’s headquarters in Annecy, France, while mass-production of the carbon rims is carried out in a factory in Romania. 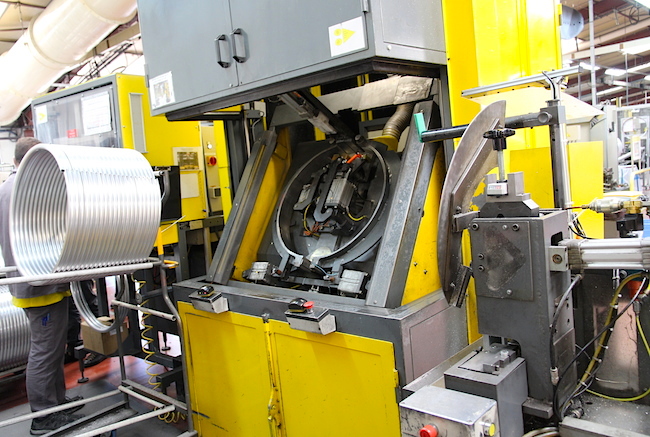 During RBA‘s visit to the Mavic aluminum rim-making facility, we weren’t allowed to take many photos, so take our word for it that there’s plenty more going on behind the scenes than what you’re about to see. Above is a bending and cutting machine, the first step in an extensive production line that sees extruded lengths of high-grade aluminum bent into a circular shape before any overlapping aluminum sections are cut away. From here, those soon-to-be-rims make their way to the welding station. 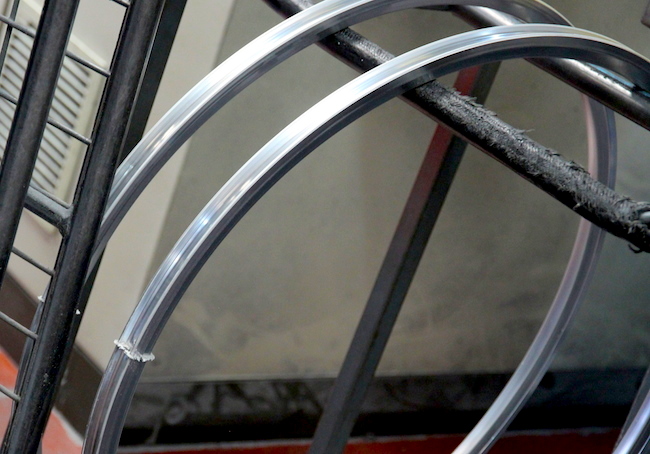 An immense electronic welding machine bonds the two ends of the aluminum circle, resulting in a buildup of excessive aluminum material. This buildup is then removed at the next station after the rim is quite literally rolled down a ramp to a worker. Field-testing begins early, it seems. 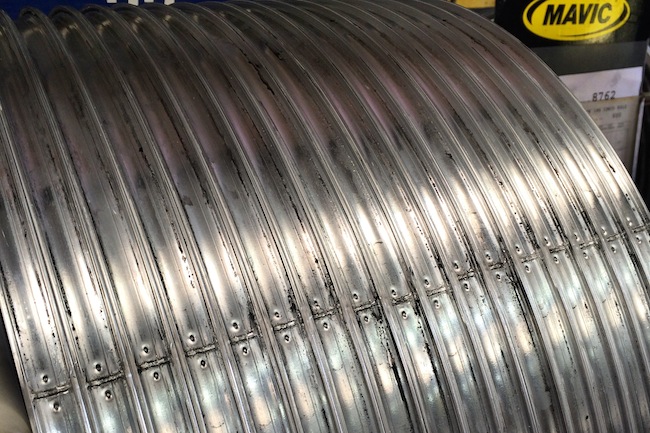 A freshly ‘deburred’ lineup of aluminum rims awaits their turn at the next few machines, which Mavic d top-secret. We can say that it’s here that the rims receive their spoke holes, along with a bit of machining. 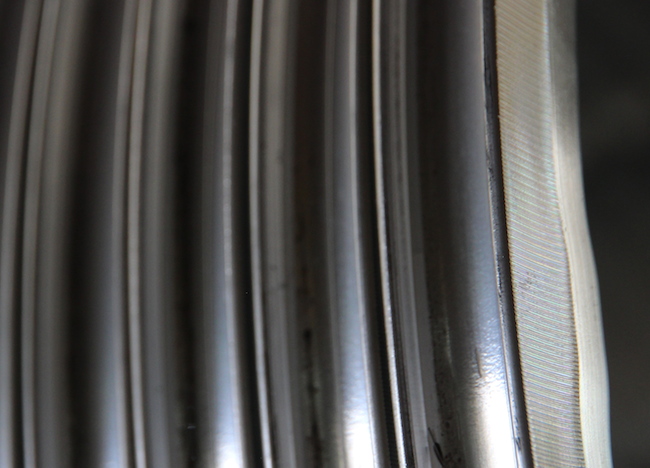 Next up, the aluminum rims have their brake tracks machined. This batch above received the ribbed, scalloped-lines found on some of the latest crop of Mavic wheels, including the new, limited edition Ksyrium 125. The goal for this Exalith braking surface is to increase stopping power over a traditionally smooth brake track. 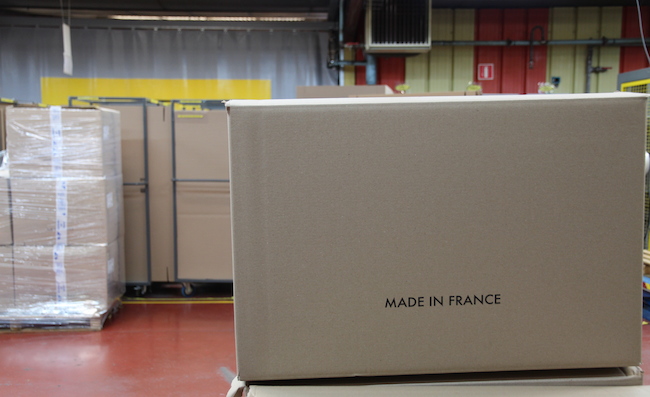 Finally, the aluminum rims receive their graphics and logos-and no, we were asked not to take photographs of that process either. It was interesting, though, that Mavic’s Michel Lethenet told us, ‘All of our graphic placement workers are female. We didn’t plan it that way, but we found that all of our best candidates happened to be female, and we think that’s simply because they have a much greater eye for detail than men.’ When RBA visited the Trek carbon bicycle assembly facility in Waterloo, Wisconsin, some years back, we found the same situation, with our tour guide then also informing us that their graphics- and logo-placement staff was comprised entirely of women. After completion, the rims are boxed up and shipped to Mavic’s assembly facilities in Romania and China. 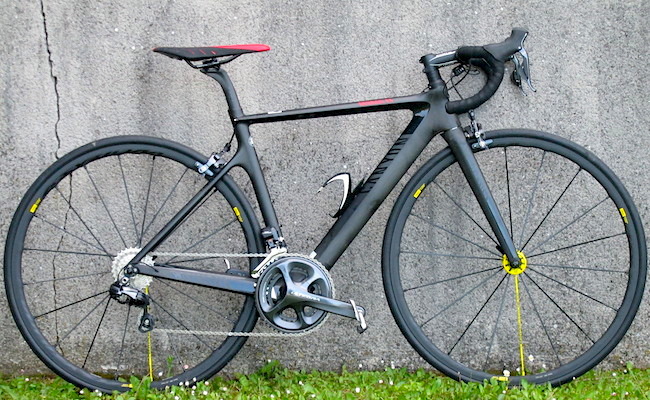 MAVIC UNVEILS KSYRIUM 125 LIMITED EDITION WHEELS
Amidst all of the fanfare and events that were part of Mavic’s 125th anniversary celebration, the most exciting was a road ride through the French countryside outside of Lyon. And that’s because, aside from the incredible roads and stunning views, the 50-mile point-to-point excursion over the rolling hills of Eastern France gave us the chance to try out the limited edition Ksyrium 125 wheels. Our demo bike for the ride was a not-yet-available-in-America Canyon Aeroad, with a Shimano Ultegra Di2 drivetrain, a Ritchey handlebar and stem combination and a Fizik Arione saddle. 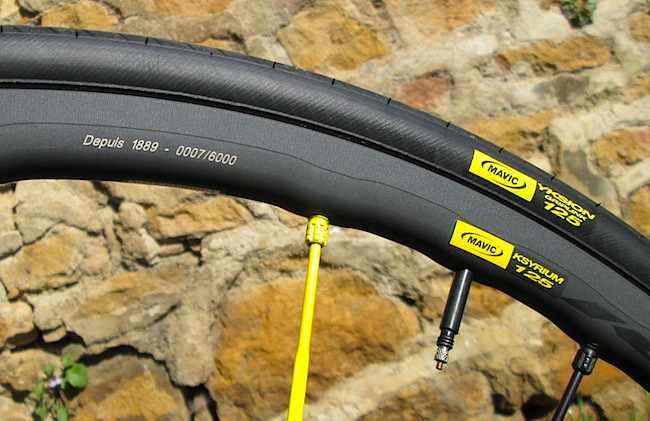 The Ksyrium 125 wheels are limited-edition items, and Mavic is only producing 6000 sets worldwide. RBA‘s Canyon Aeroad was outfitted with serial number 7 out of 6000. The ‘Despuis 1889’ is a fine detail that reflects Mavic’s founding in 1889, making the company 125 years old. The clincher-type Ksyrium 125 rim is crafted from Mavic’s exclusive aluminum alloy called Maxtal, which Mavic says offers a higher strength-to-weight ratio than other aluminum alloys. Weighing in at a claimed 1370 grams for the pair, the front wheel measures 24mm deep while the rear measures 26mm deep. 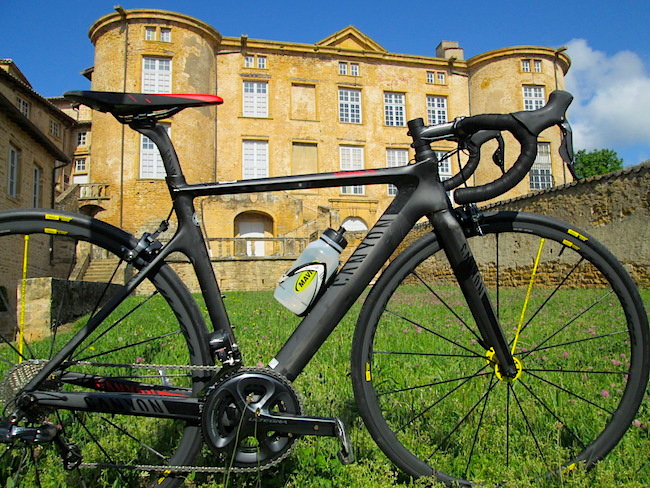 The black rims feature Mavic’s Exalith 2 brake surface treatment, and the rim profile is rounder than most other low-profile Mavic rims we’ve recently tested; this shaping is brought about by Mavic’s latest advancement in milling technology, dubbed ISM 4 (i.e. “inter spoke milling”). Both front and rear receive aluminum hub bodies with adjustable sealed cartridge bearings. Spokes on the front wheel and on the rear’s non-drive side are made from Zircal, another of Mavic’s aluminum alloys, while the rear’s drive side spokes are made from Tracomp carbon fiber. 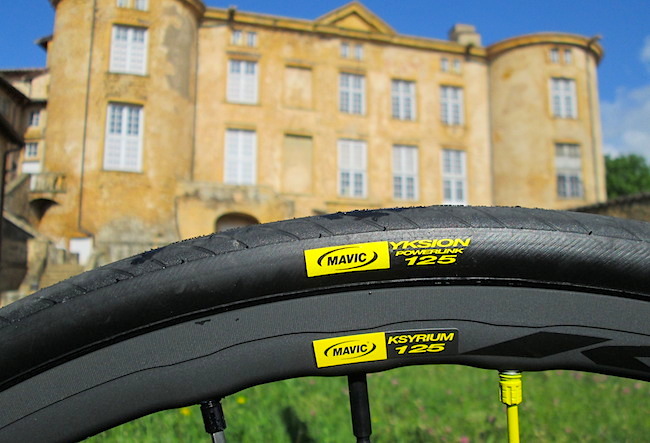 Also new are Mavic’s Yksion Pro 125 tires, which are included with your purchase of a set of Ksyrium 125 wheels from retailers. These tires receive special ‘125’ graphics, while the front includes Mavic’s Griplink tread and the rear includes the Powerlink tread pattern. They’ll be available in 23mm and 25mm widths. But you’re not limited to these tires, of course; Mavic says that the Ksyrium 125 wheels can accept up to size 32c rubber. 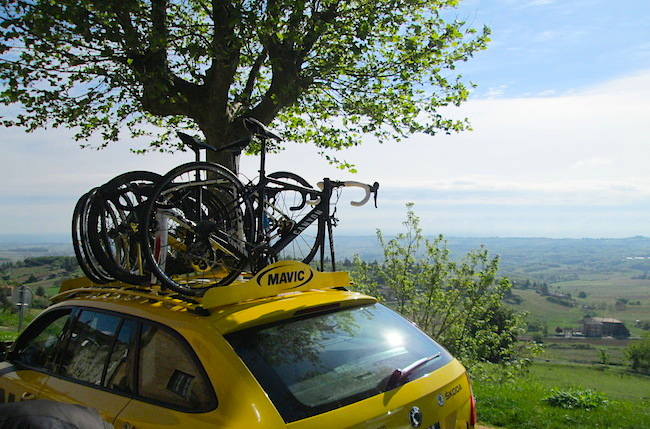 FIRST RIDE: MAVIC KSYRIUM 125 ALUMINUM CLINCHERS
During our 50-mile ride in Eastern France, we found the new Ksyrium 125 wheels to roll quite well with a ride quality that erred on the rougher side, best suited for cyclists who prefer some road feedback from their hoops. They felt plenty stiff when accelerating uphill out of the saddle, an experience made all the better by the Ksyrium 125’s relatively low weight. The Yksion Pro 25 tires performed better than most other Mavic tires we’ve recently tested, highlighted by plenty of grip in the corners over a few hours of riding in dry conditions. 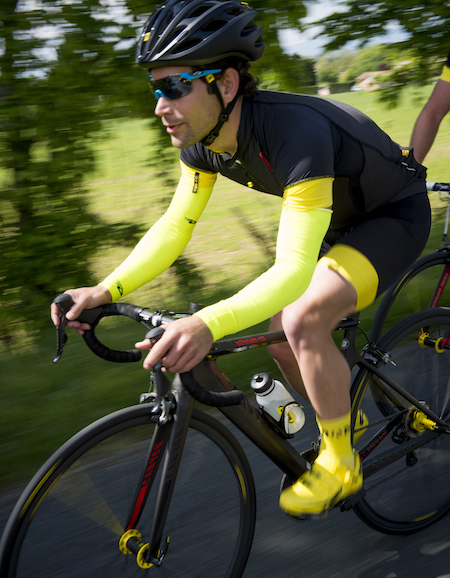 Putting the Mavic Ksyrium 125 wheels to the test on French roads. (Photo: Mavic)
The Exalith braking surface, as we’ve encountered previously on other models, does indeed offer plenty of stopping power. But unless the brake pads are positioned precisely to Mavic’s recommendations (which includes a fair bit of toe-in), then the resulting squeals will quickly become bothersome. Likewise, without that precise pad placement, the Exalith surface treatment causes the braking feel to be a bit grabby, lacking ideal modulation. Overall, the Ksyrium 125 is another unique entry into Mavic’s expansive line of wheels, and we look forward to giving them a full test on our home roads soon. 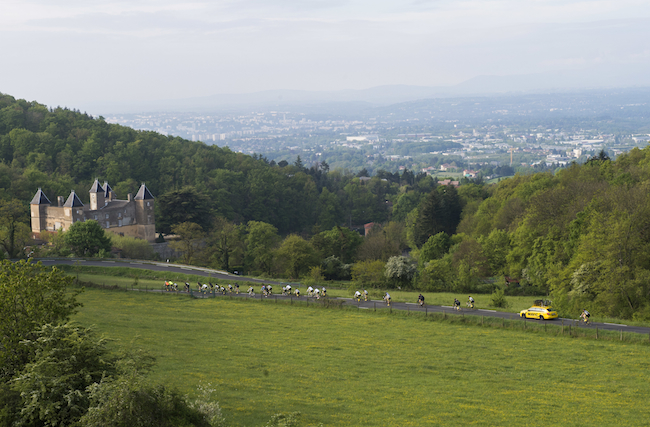 For more information on Mavic, go to www.Mavic.com! And for more exclusive photos from the event, be sure to follow Road Bike Action on FACEBOOK and INSTAGRAM!