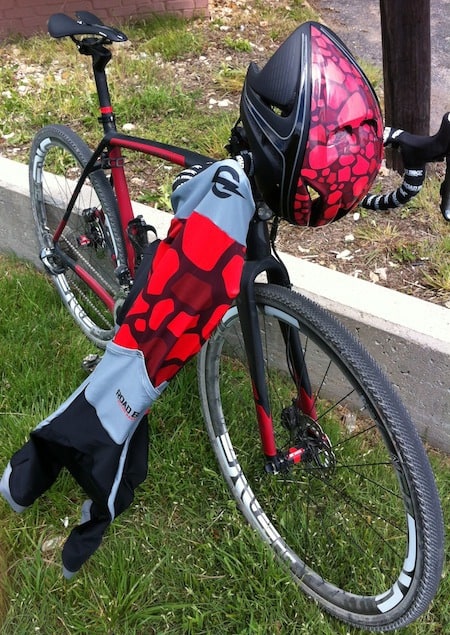 Share
What has quickly become THE gravel race of the year, Dirty Kanza 200 has been a target for us for some months now. This 200-mile gravel race held in Emporia, Kansas helped spread the gravel grinder craze internationally, and we figured it would be the perfect event for a project that incorporated training, nutrition, and equipment choices. Take a look at our race preview coverage here. Not only were we sporting a new skinsuit from Endo Customs and a Specialized Evade helmet with a custom touch from NLA, every piece of the Crux Evo we were riding had been hand-selected in order to help us not just finish the race, but hopefully contend for the win. 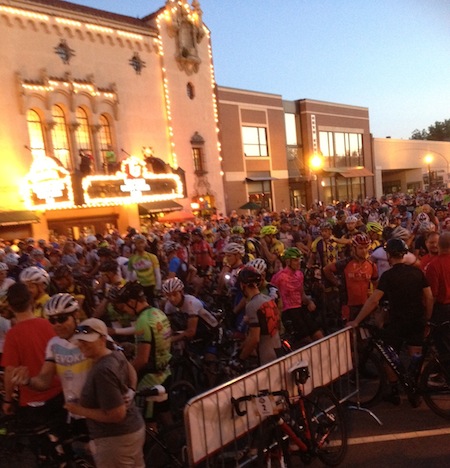 The day finally came, and a 6AM start on the main street in Emporia corralled the 1,250 riders that managed to register before the 9th edition of the event filled up. A three-mile neutral rollout through town was the only paved road we’d be seeing until the first checkpoint at mile 50. In all, the 203-mile race had less than 15 miles total of pavement.
(Photo: Dorothy Sullivan) 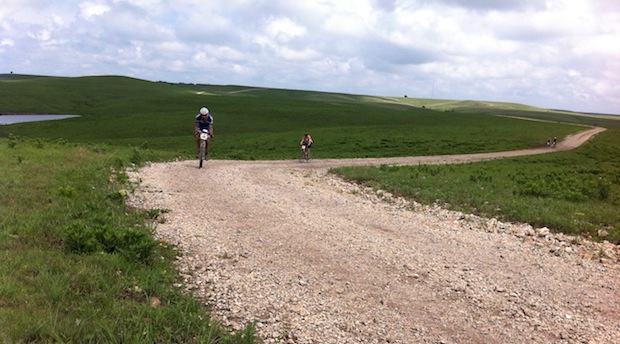 Once out of town, there was nothing other than dirt, rocks, grass, and a whole lot of miles before we would be seeing Emporia again. The Flint Hills that surround Emporia give the 200-mile race over 10,000 feet of elevation gain coming from incessant rolling climbs. There are two types of dirt roads in Kansas, “maintained” like this one, and “non-maintained”, which resemble a mountain bike double track with large pieces of flint rock on the outer edges looking for any opportunity to steal the precious air from your tire. 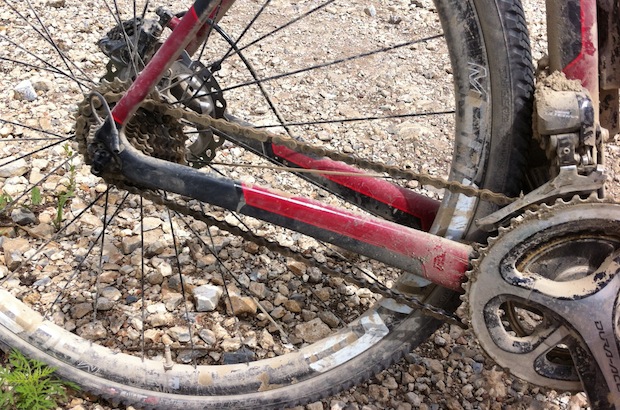 As prepared as I was, no amount of planning could have prevented a rider from veering into my rear derailleur only 25 miles into the race. After an hour of chain work and lots of frustration, I managed to create a rideable single speed setup that would get me through the next 175 miles to the finish. In a span of a few seconds I went from trying to win the Dirty Kanza, to simply trying to finish. 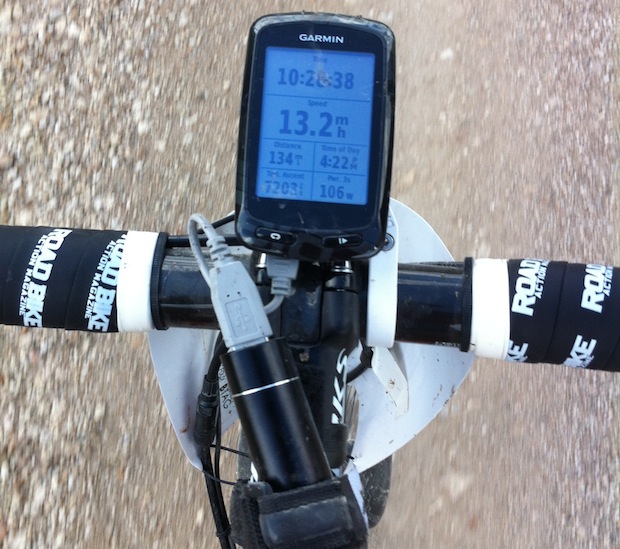 Although I would have preferred a bigger gear, the only combination I could get to work was a 34×19, which meant that I was limited to under 14mph on the flats before spinning out. Making things even slower was the fact that every time I would go above 200 watts on a climb, the chain would climb up one cog, bind, and pull the wheel out of the dropouts. That meant it was a slow and steady ride for the remainder of the race. It was a good thing that I decided to go with an extra battery for my Garmin 810 since I ended up being on course three and a half hours longer than anticipated. 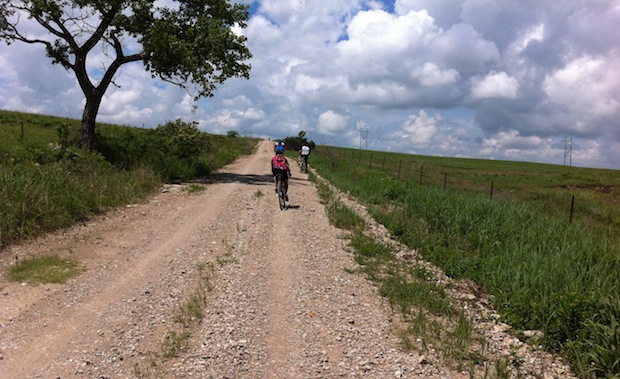 Admittedly, being from Southern California it’s not too often that I get to see any green vegetation that isn’t being kept that way by a sprinkler system, but the tallgrass prairie we rode through almost seemed too green to be real. Riding a little slower than normal due to my derailleur mishap allowed me to look around and enjoy the scenery rather than just trying to get through it as fast as possible, and of course take photos along the way. 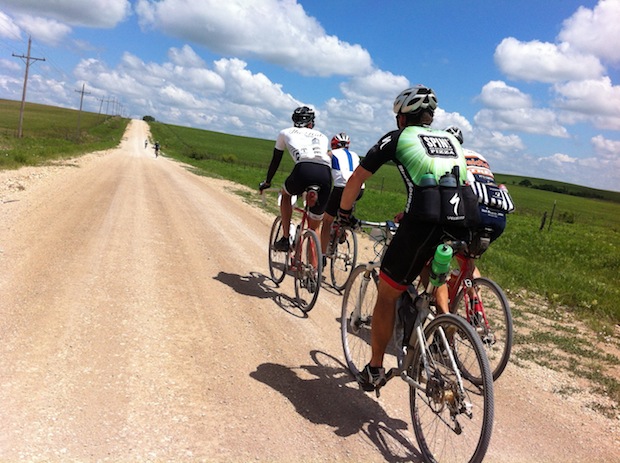 I was feeling confident about finishing when we hit the smoothest dirt section of the entire race at the mid-way point. It was one of the few places where you could ride close to others and enjoy a draft. By the time I made it 100 miles in it seemed like I was nearly to the finish, a finish I would finally get to eight hours later… 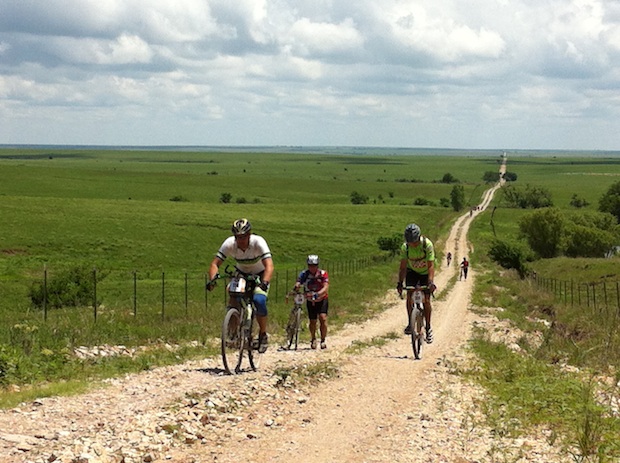 Gravel roads as far as the eye can see, and rider after rider trudging down them. If you think all of Kansas is flat, I challenge you to ride in the Flint Hills! While the riders around me cursed the hills and savored the flat terrain, I was the opposite. Due to my low gearing I could ride the climbs at a comfortable cadence, then coast on the descents, whereas the flat terrain had me pedaling at an uncomfortably high cadence. 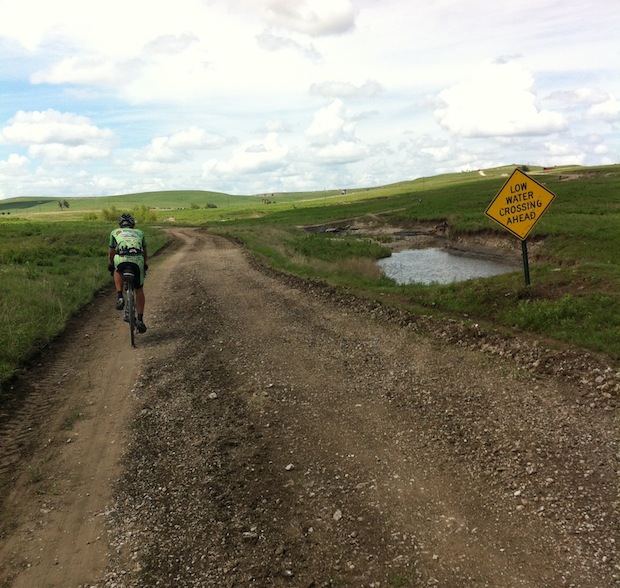 A little mud and a big water crossing were just a couple of the obstacles that faced the riders early on. Once past those things it was just about grinding out the miles while trying to avoid flat tires. 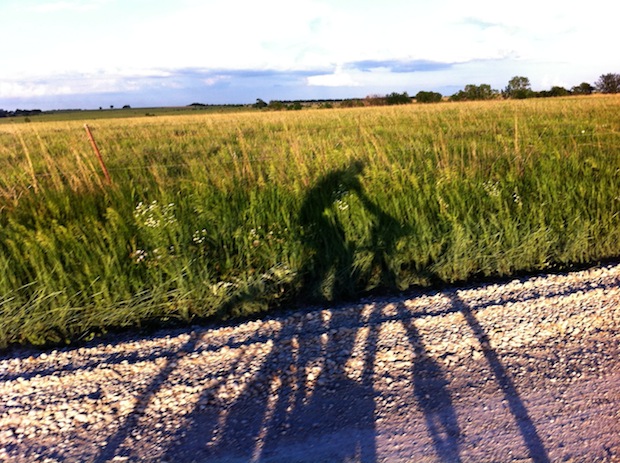 As the lonely miles wore on the setting sun gave me a riding companion, for a while at least. Even when passing by another rider there was little interaction, as everyone was fighting their own battle to keep their tiring mind and body headed toward the finish line. 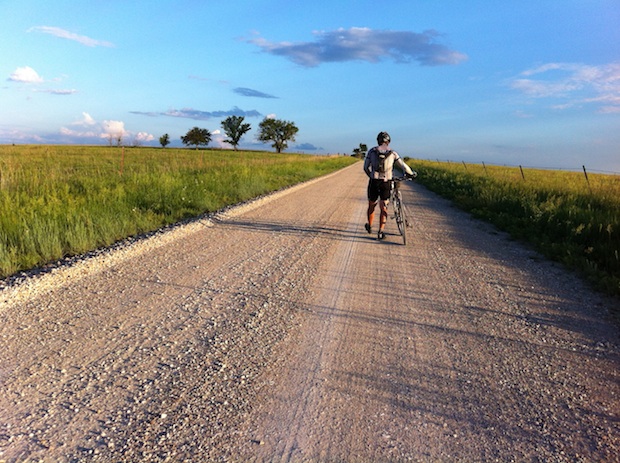 And it can always be worse…With 30 miles to go, the finish line seemed so near, but yet still so far for some. 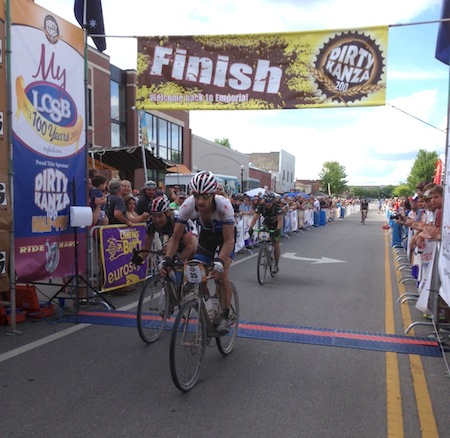 Back in Emporia, 203 miles later, a record number of riders finished before sunset, making the 2014 DK200 the fastest edition in its history. Even with ideal course conditions and temperature, just over half of the starters actually made it to the finish. In order for riders to continue past each of the three checkpoints, they had to maintain a 10 mph or faster average speed. The last three official finishers crossed the line with a time of 20 hours and 55 minutes. Hats off to them! (Photo: Dorothy Sullivan) 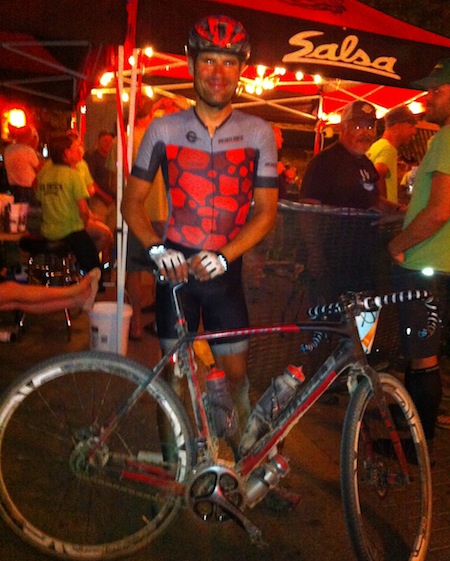 Even if the race didn’t pan out like I had hoped for, I had a truly amazing time and couldn’t have been happier when I finally finished with a time just over 15 hours. Overcoming my broken rear derailleur and getting to have my name on the list of finishers was a victory in itself. As for next year, I’m already looking forward to my trip back to Emporia. If Dirty Kanza 200 (there is a 100 mile version too) is on your radar you’ll need to plan ahead since registration is likely to fill up within hours of it opening. Dirty Kanza is also a CTS Bucket List event, where they’ll take care of logistics and provide race support during the event itself. This year, CTS had 30 riders as part of the Bucket List, with all but two of them finishing. The right support can make all the difference. 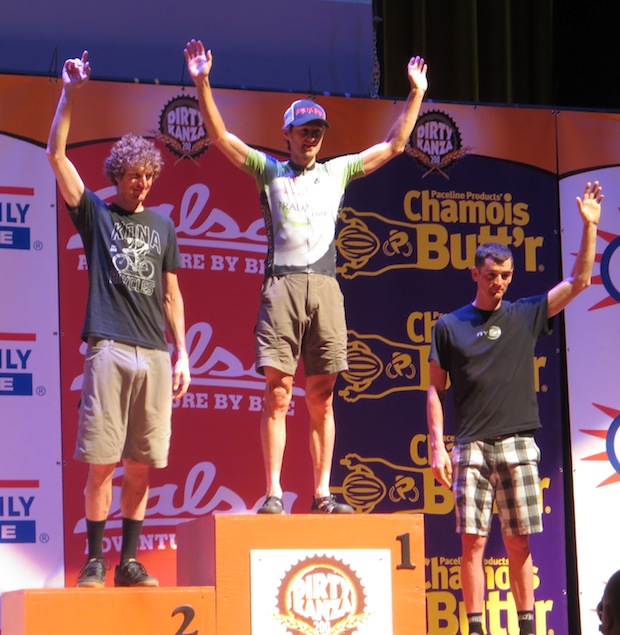 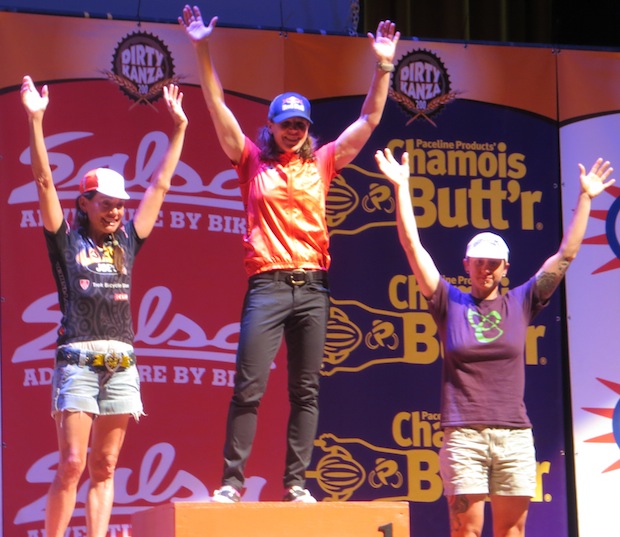 For the third straight year Rebecca Rusch claimed the DK200 women’s title. She has come to love gravel racing so much that she created her very own event last year called Rebecca’s Private Idaho, which uses 100 miles of gravel roads through the mountains of Ketchum, Idaho. Second place went to KT DeSantis with Angie Rake in third.
For more information on Dirty Kanza go to: www.dirtykanza200.com