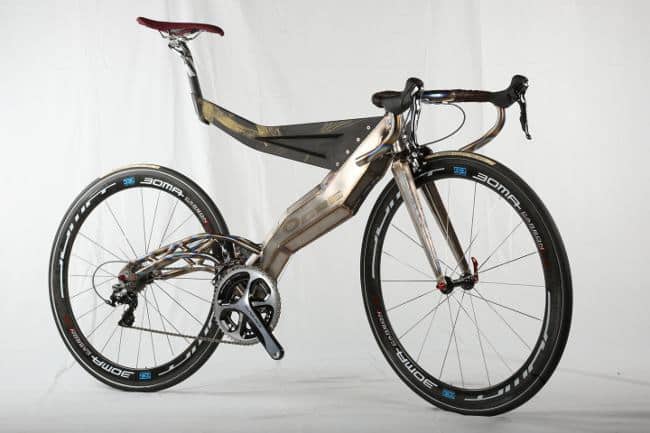 Far from the less radical production titanium road bike they build, the Weld-One Ogre road bike caused quite a sensation at the NAHBS. The carbon fiber seat pod had a lot of old-timers thinking about the Softride beam bikes of the 90’s. 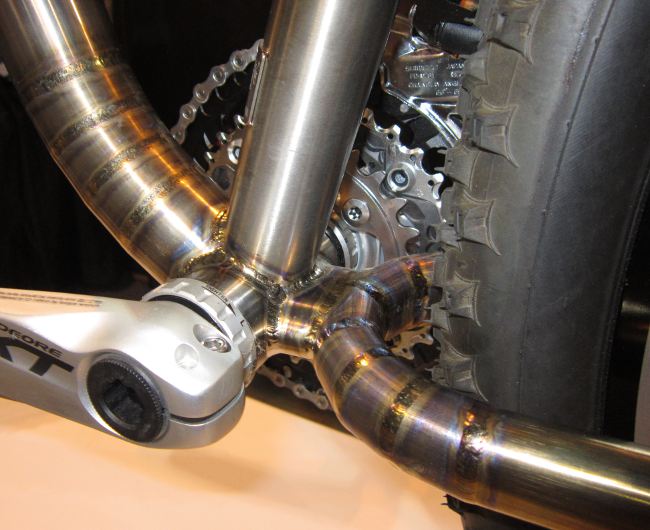 Also spotted in the Ogre booth was a less radical mountain bike that still sported some special handwork in the sectioned titanium frame parts that were meticulously welded together. 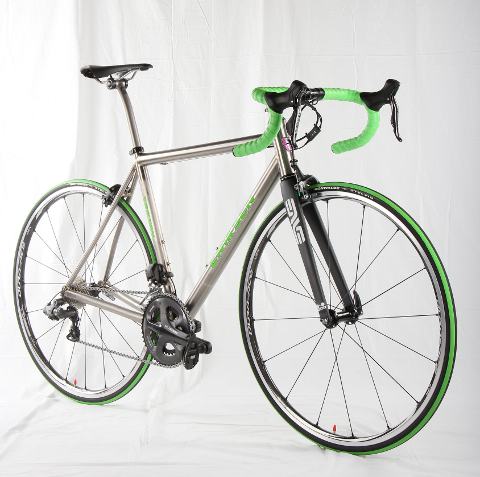 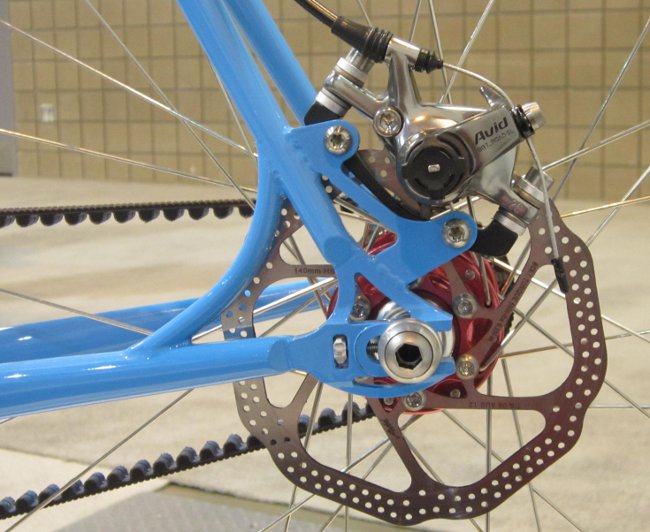 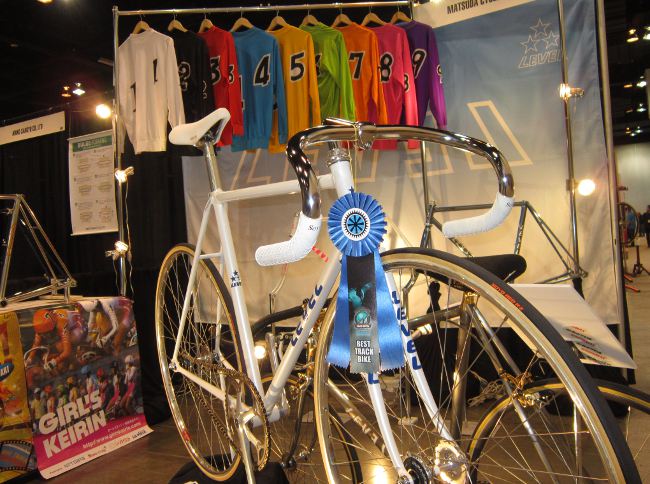 The Level track bike not only took the award for best track bike, but later in the show it won a second round of applause when it was called out as the recipient of the coveted Presidents’ Award. 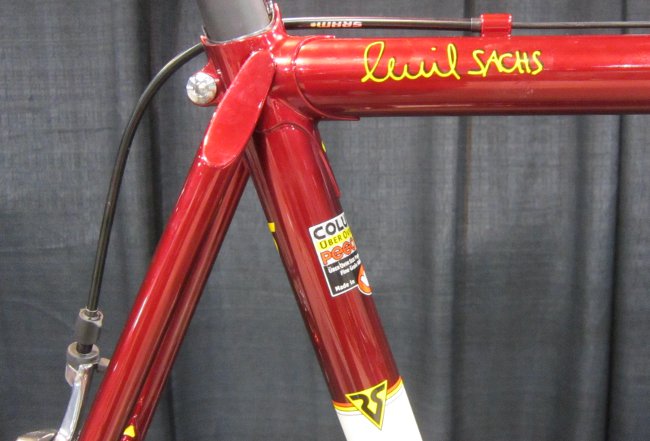 Being a frame builder is not easy. It takes years of hard work, tireless self-promotion and of course, a good product that people want to make their own. East Coast builder Richard Sachs has been in the business for decades and the waiting list for one of his ‘cross frames is almost as long. A lot of people want a Richard Sachs frame. 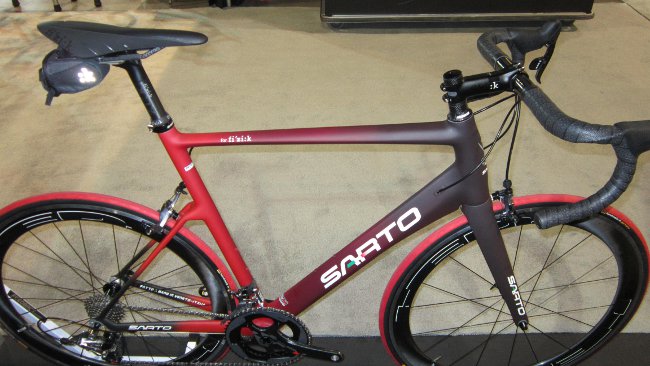 Catching glances at the Fizik booth was this one-off Sarto aero road bike that utilized tubes from three different models – all that are still handmade at the Sarto Cycles factory outside of Venice, Italy. 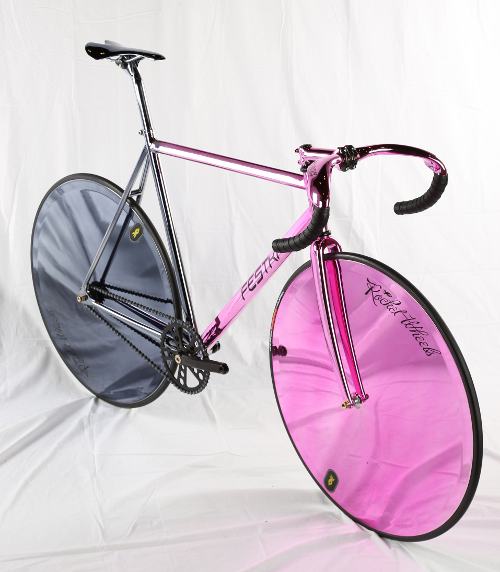 Festka is a Czech bike brand that first showed-up last year with some cool looking bikes, but in their sophomore year really turned heads with a collection of eye catching bikes and wheels that they make in Vinohrady, Czech Republic. The chromed track bike, mounted with their Rocket Wheels, made everyone stop in their tracks. The Festka boys made sure that no one would miss their carbon Zero frame. The neon pink frame is available in three versions, one (the Divan) which uses frame tubes internally coated with elastomer to dampen road vibrations. could easily be spotted anywhere in the crowd. 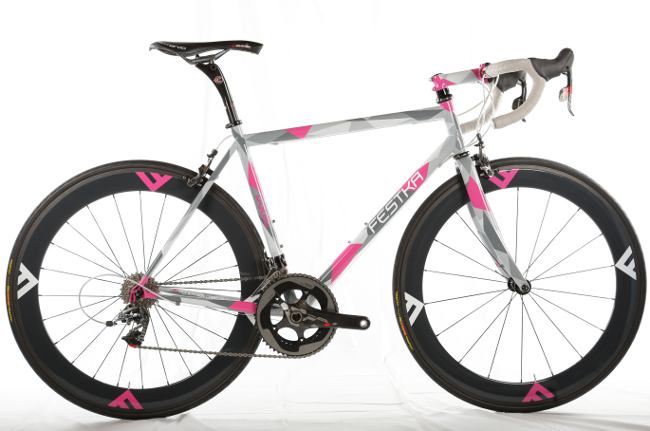 The steel Festka Pablo was another Czecho made bike that enjoyed one of the best paint jobs at the show. The limited edition paint scheme is inspired by Pablo Picasso and Festka plans to make 25 available – so much better than black, eh? 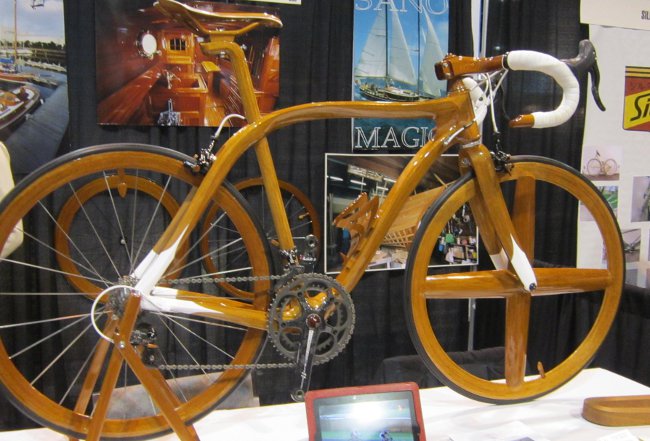 One of the best stories I heard at the show, as well as one of the most out-of-this-world amazing bikes I saw was this wood bike made by Sueshiro Sano. Made entirely from hollowed out mahogany tubes with varying wall thicknesses throughout. Sueshiro said the bike weighed around 17lbs. and he had videos of the bike being raced in Japan. That was the bike part – the best story? Sueshiro is a 9th generation boat builder..as in he traces the family job going back over 230 years! He said building bikes is easier and you too can own a Sano Magic for a cool $20,000 but you’ll have to wait a few years due to his being back-ordered. 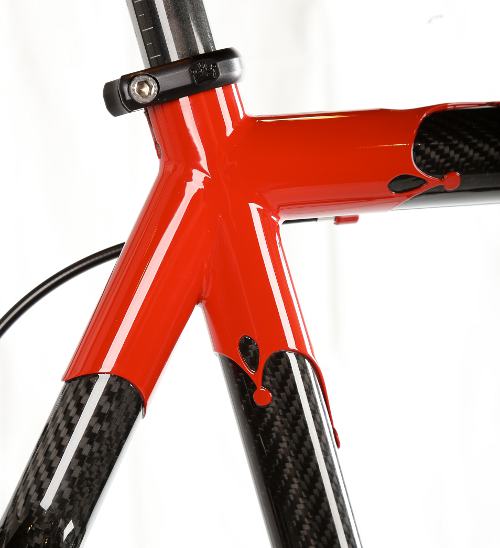 On the morning of day one at the show there was a big island booth that sat empty. Odd. By day two the booth was filled to the brim with some of the most beautifully painted and handbuilt bikes to come out of North America – the guys from Independent Fabrications had arrived! Not to let a little thing like an entire highway in Kansas shutdown with snow, IF was in the house and showing off a range of road and dirt bikes made from steel, titanium and carbon. The titanium crown lugs on the $5995 XS epitomize the level of craftsmanship found from the east coast builder. 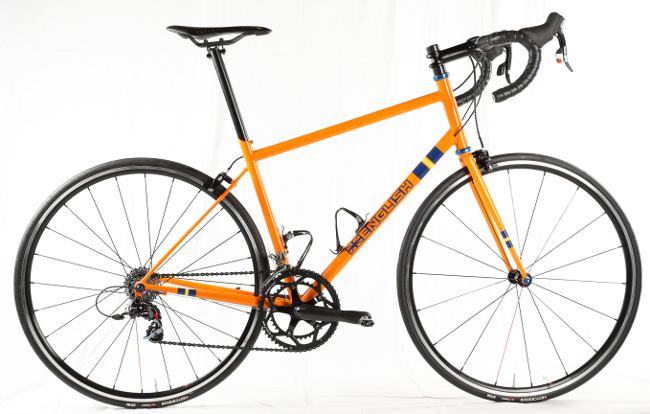 How about this minimalist English Endurance road bike. Weighing in at less than 15lbs, the bike sells for $7325 and continues the brands forward push with steel. 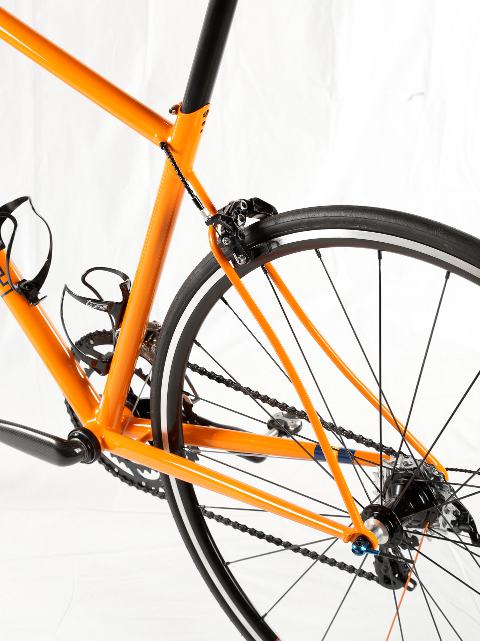 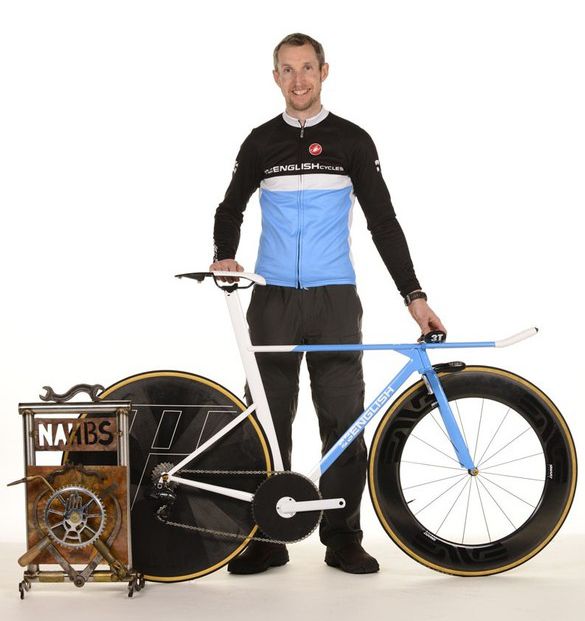 And the winner for Best In Show was….none other than Rob English and his stunning (sub-17lb.) TT MK2 bike. Since Rob first burst on the scene at the 2012 show in Sacramento he was working part-time as a designer at Bike Friday. Lucky for all of us, the success he garnered from the wild bikes seen then has allowed him to commit to building his own frames on a full-time basis. Rob showed up with six sensational steel bikes…”It’s nice to see if I can get steel to keep up with carbon. My idea for the TT bike is in the spirit of Graham Obree and the basic theme is just to reduce the frontal area as much as possible and keep it as clean in the air as possible.” Rob made the crank, brakes, handlebars, and one-off Shimano Di2 shifters and his best guess as to the price was $12,575 complete or $5500 for the frame. By the way, thanks to Shimano for once again making the Handmade Bike Show a possibility.

Shimano Pulls Back (Part of) The Curtain

CHAPTER 2 BIKES – THE WONDER FROM DOWN UNDER

THE PARADISE OF CYCLING THAT IS HAWAII