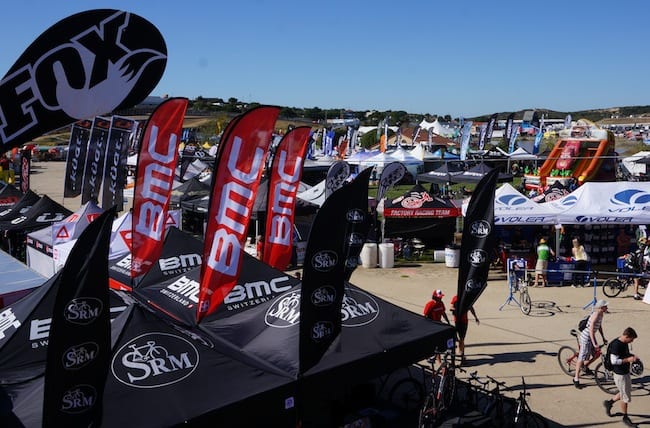 The Sea Otter Classic  bike festival is taking place this weekend in Monterey, California, and includes four days of road, mountain bike and cyclocross racing, as well as the largest annual bike expo in the United States that’s open to the general public. Over the past few years, Sea Otter has become a must-do event for many companies in the bike industry looking to show off their latest products and offer sneak peeks at what’s to come in the next year. There’s also a smorgasbord of new wares on display, so here’s a look at some of the things that caught our eyes. And don’t worry, there’s plenty more, so look for more Sea Otter coverage soon.

SKS Germany‘s US-based office is now the official distributor for Cratoni helmets in North America, and it’s bringing over several new lids. These include the Bullet (left) and the C-Breeze, which retail for $160 and $180, respectively, and feature plush padding, plenty of large ventilation ports and a single-hand operated retention device that’s also vertically adjustable. Availability for Cratoni helmets is said to be around July 2013.

The Cratoni C-Bolt will retail for $120 and features the same technologies as the pricier options above. All of the helmets will come in several sizes and colors.

At Sea Otter, Cratoni reps were keen to show off the C-Blaze, and it’s something they described as more of an ‘entry-level’ helmet. But a red LED light integrated into the retention dial is anything but ‘entry-level.’ The light even includes three different modes of operation. Pricing is still forthcoming on the C-Blaze, but should be around $100.

Vittoria produces a wide array od road bike tires, but the company’s most eye-catching product at Sea Otter was a bright pink version of its best-selling Rubino Pro clincher. The pink color is a limited edition model that will be available in mid-May to coincide with the Giro d’Italia and its famous maglia rosa (pink leader’s jersey). The pink Rubino Pro will be available in 23c and 25c sizes, but will only be sold in packs of two.

Osprey is in the business of building rugged bags and luggage for camping, hiking and backpacking, but it’s best known in the bike world for its line of hydration packs. And while Osprey has offered up some products for roadies and commuters in the past, it’s gearing up for a big push in the coming year with several different series of packs for a broader range of riders. The Radial (left) will come in 26- or 34-liter capacities at $159 and $169, respectively, and in two sizes to fit both large and small customers. Key features include black or green colors, a padded laptop compartment and Osprey’s signature AirScape shoulder suspension system that allows for increased airflow across the wearer’s back. The Spin (right) comes in just one size, but in two different capacities: 32-liter ($149) and 22-liter ($139).

Osprey’s Portal series is a more fashion-oriented line of packs for commuters. The Pixel (left) will retail for $139 and features a padded laptop compartment, a removable PowerHouse cord organizer, and zippered extensions to increase the overall volume. The Pixel Port (right) is a smaller, sleeker variant of the Pixel that will sell for $119, and it features a large plastic window that provide protection for a tablet/iPad while still giving the user access to it while in transit. Look for all of Osprey’s new products around August.

Serfas makes every bicycle accessory under the sun, including a variety of floor pumps. The brand’s newest offerings in the inflation department are the FMP-969 (left, $120) and the FMP-900 ($90).  They both feature a sleek, stainless steel body and a large, easy-to-read gauge. The differences are that the pricier 969 sports a braided steel hose and metal handle, while the 900 has a rubber hose and a wooden handle.

We’ve been testing the Koala Bottle for several weeks, so we were excited to run into the company’s founder, Anthony Goldman (left), at Sea Otter. The Koala Bottle system includes an easy-access cage with plenty of mounting adjustability to suit most any frame size that’s imbedded with a magnet. The included water bottle comes with a removable metal ring (that can be easily installed on most any other bottle) that secures it in place when riding. The system sells for $28 and can be adapted for most of your own bottles. All of the components of the Koala system are made in the USA.

There’s never any shortage of wild displays at Sea Otter! Specialized was showing off what they claimed to be the world’s largest cowbell. Look for more Sea Otter coverage soon, right here on RoadBikeAction.com!