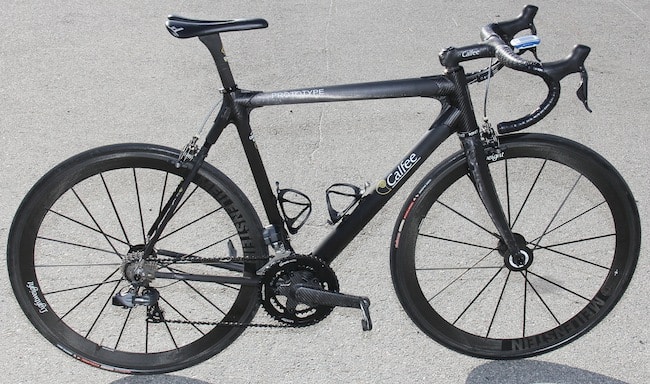 Although the Sea Otter Classic is more known as a mountain bike event, the road side of things didn’t disappoint, large in part to Calfee Design deciding that the four-day festival would be the ideal launching ground for their prototype Manta (as in manta ray).

What Calfee has in the pipeline isn’t just an updated Dragonfly; no, this was an all new platform and fresh territory for the Northern California-based builder. Oversized carbon tubes, a tapered steerer, and a massive 65mm bottom bracket shell housing a Look Zed 2 crank are all highlights of the new frame, but that’s only half the story. A pivotless rear suspension tucked into the mono-seatstay that allows 1cm of elastomer dampened travel is really what the new design is all about. 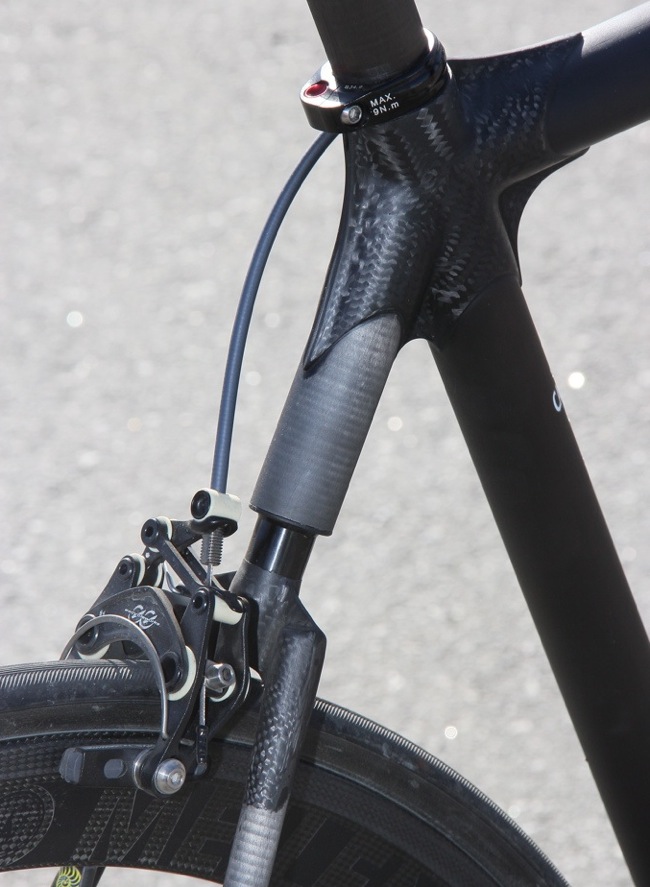 The Manta’s rear shock is clean, elegant, and simple. 10mm of elastomer dampened travel creates a unique ride that changes the feel of a road bike as you know it.
The frame has been in the works for the past five years and is by no means designed as a ‘comfort bike’-it’s all about performance. ‘A smoother ride would give athletes a competitive edge in allowing them to be fresher by the end of the race, as well as descending faster and safer’, says Craig Calfee. 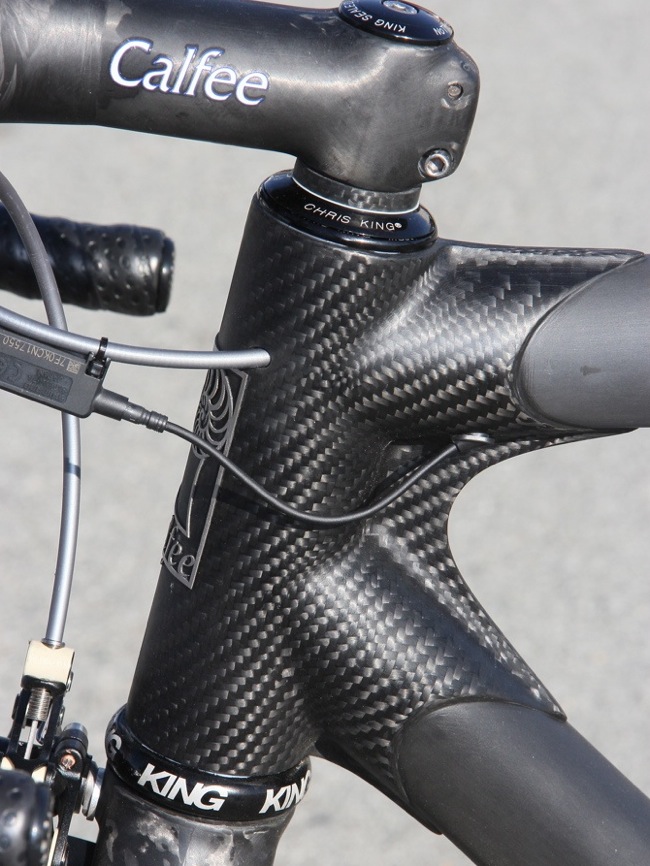 Calfee creates the molded headtube, bottom bracket, and seat tube lugs in-house, while the tubes come from Utah-based ENVE Composites. In a first for Calfee, the Manta uses a tapered 1-1/8 to 1-1/2 steerer.

Calfee’s new patented suspension is designed to be minimal in terms of weight, maintenance, and travel. In a matter of five-minutes you can detach the seatstays from the titanium dropouts via one bolt on each side and change the elastomer (multiple durometers will be available for different rider weights) or clean the shock. Bikes like Trek’s Domane have opened the door for the prototype design; according to Craig Calfee, ‘It speeds up the acceptance by the market place when the pro team is racing on them more than just at Paris-Roubaix. People have seen that you can still stay at a low weight while getting more functionality. We’ve wanted to offer this frame for a while, but didn’t feel the market was ready’. Based off pre-orders and feedback, Calfee says that the suspension component is the bike’s premier selling feature, but for those that aren’t ready for such a thing, a fully rigid version will also be an option. 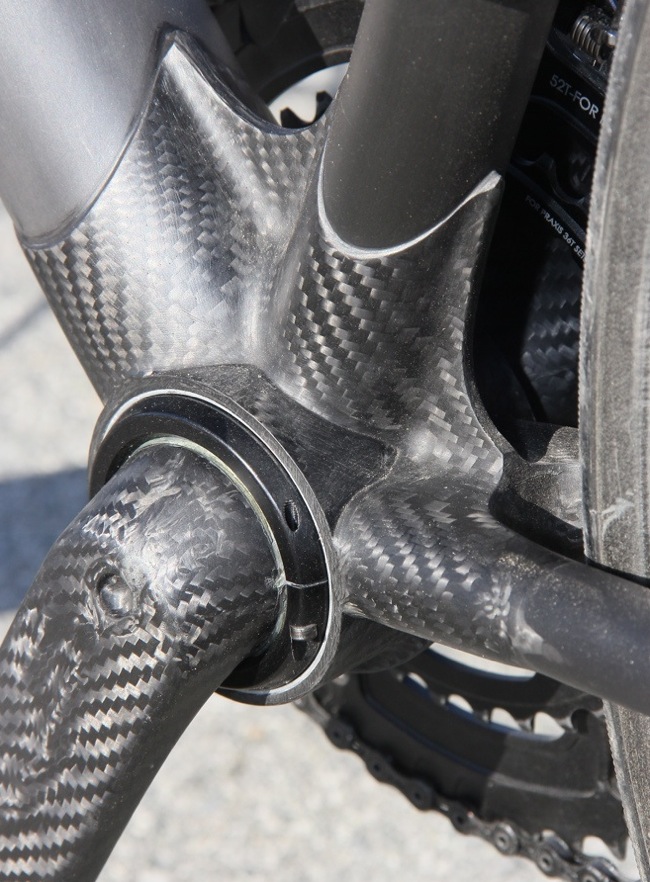 French frame-builder Look granted Calfee the use of their Zed 2 one-piece crank which uses a massive 65mm bottom bracket shell. This allows enough room to insert a Campy EPS battery unit into the downtube for those wanting EPS, but not the unsightly external battery.

As for the rest of the Manta’s highlights, it starts at the front, and for the first time Calfee goes to a tapered 1-1/8 to 1-1/2 steerer to boost stiffness as well as opening the door to more fork options. While maintaining the trademark molded carbon lugs that are made in-house, their overall size nearly doubles to accommodate the custom ENVE-made top tube and down tube that closer resemble the diameter of Calfee’s bamboo tubes than anything found on their current carbon frames. In joint cooperation with Look, Calfee uses their Zed 2 one-piece carbon cranks with its proprietary 65mm diameter bottom bracket. The large diameter bottom bracket shell and downtube provide a hidden advantage, the ability to fit a Campy EPS battery internally. As of now, the Manta will only be compatible with Di2 and EPS electronic wiring. 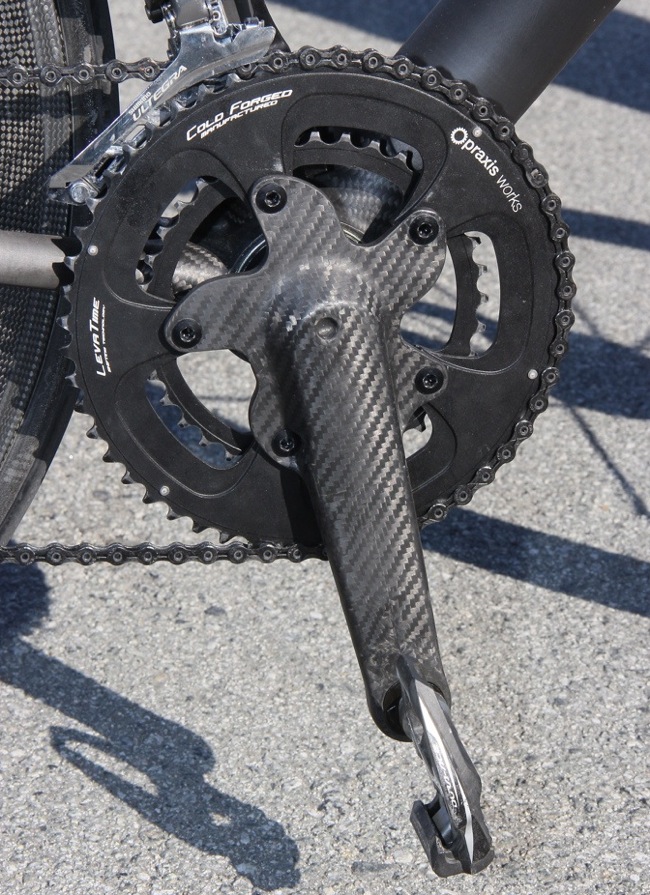 A Zed 2 crank typically has mounting locations for both compact and standard cranks, but Calfee cleaned up the look by removing the option for compact.

Like the Dragonfly and Tetra, the Manta will have an option for disc brakes, in addition to their Adventure, and CX geomtery, and as we proved last year, the Adventure makes for an incredible gravel format. Pricing is $4,895 for the frame only, or you can get a module package with selections ranging from fork, headset, Zed 2 crank, chainrings, eebrake, and Lightweight wheels. Initial Manta orders will be shipping as early as June. 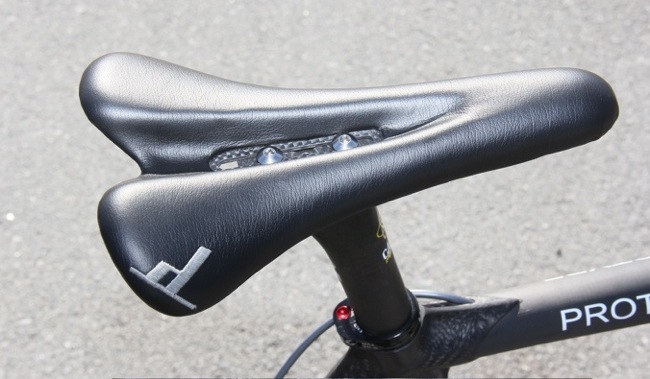 A fairly exotic build featuring Lightweight Meilenstein clinchers, Dash Saddle Post Combo, eebrakes, and Calfee’s BarStem with integrated Garmin mount, along with Ultegra Di2 put the Manta in the mid-14-pound range-not crazy light, but still well below what any pros are allowed to race. 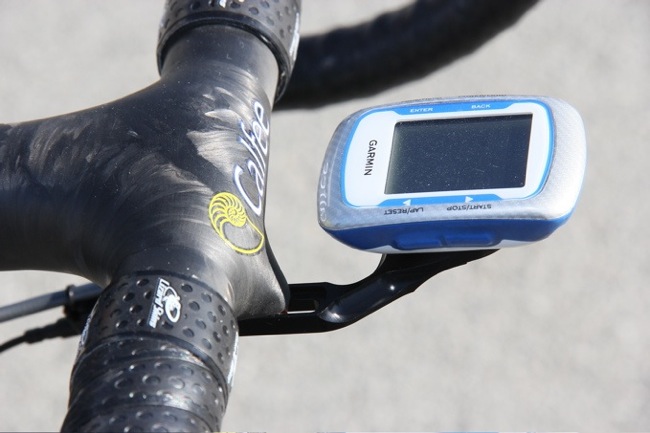 Calfee’s BarStem uses the CNC-machined arm from K-Edge to create a functional and cool
Garmin mount.


EXCLUSIVE RIDE
Over the course of three rides we were able to get a good feel for the new design, and what the future of road bikes might feel like. One centimeter of travel seemed negligible, until we actually tried it. With worn, chip-sealed pavement commonplace on many of the roads around the Laguna Seca area, we had ample testing grounds. The steady vibrations that come with the road conditions weren’t just subdued, they were basically gone in the rear, while larger bumps were dramatically softened. This wasn’t exactly a surprise since going from a rigid frame to the 1cm of travel had to have a noticeable impact. What we were most interested in was how the suspension would handle high-speed descents and pedaling feedback. 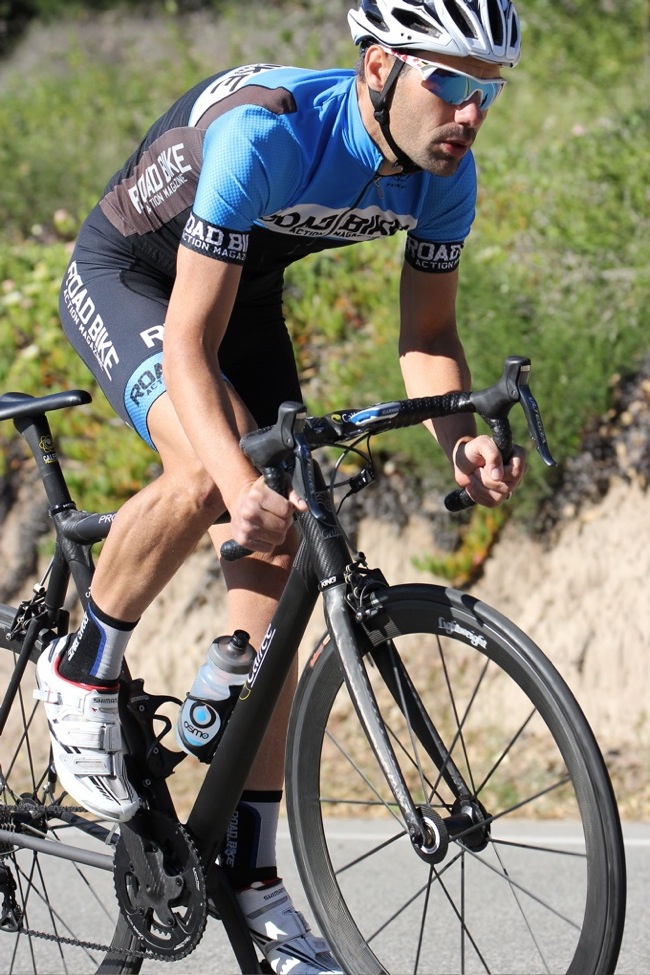 Descending was indeed the bike’s strong point. We all know how hitting small stutter bumps mid-turn can be slightly unnerving; well, the suspension helped tremendously in absorbing some of the impact that can cause a tire to break traction, and keeping the tire following the contours of the road. Since Calfee’s purpose for the bike is for performance at the highest level, its overall pedaling efficiency is going to be a big factor. Without a doubt, over the course of a long ride the overall wear on your body is going to be reduced, but what it will ultimately be judged on is pedaling efficiency.

The smoother your pedal stroke is, the more fluid the rear-end feels as it eats up the road’s impurities, but as you jump out of the saddle it doesn’t have the same snappy feel as a rigid rear-end. This isn’t to say it’s less efficient in terms of power transfer, it’s just a different feel. Ultimately, it’s going to come down to getting more time on it on our home roads with a power meter (and Strava) to truly quantify what we’re feeling.

Even though the Manta is still in the prototype phase and could see a couple small changes in terms of tubing thickness, what we rode is for the most part, what’s going to be hitting the market in a very short time. The Specialized Roubaix, Cannondale Synapse Hi-Mod, and Trek Domane all have made a name for themselves and continue to push the boundaries of what’s considered compliance and what’s suspension. Calfee’s Manta ups the ante in terms of offering a true suspension design on a traditional racing geometry-and only time will tell if the performance benefits are enough to win over the ‘hardtail’ crowd.

Tour Of The Gila Preview