FRS Joins Up with US Military Cycling 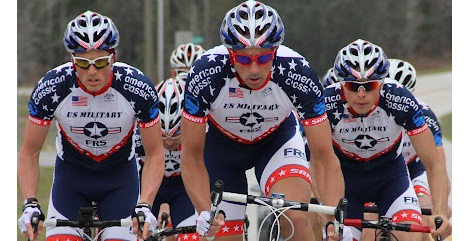 U.S. Military Cycling fueled by FRS is fielding a strong lineup for 2012, and each team member is an active duty serviceman or woman. (Photo: U.S. Military Cycling Team)
And now for the official word from the team…
2012 US Military Cycling announces fueled by FRS partnership
The US Military Cycling Team is pleased to announce that FRS? Healthy Performance? is expanding their support of the Team to the role of Title Sponsor. The Team will ride ‘Fueled By FRS’ for the 2012 season and will continue to promote cycling and healthy lifestyle choices to military members and the general public.
FRS is a strong supporter of the men and women of the United States Military in their on and off duty activities. The company recognizes that the demands across the spectrum of military duties are rigorous, while maintaining a healthy lifestyle off duty is essential.
FRS is extremely excited to add the US Military Team and our soldier-athletes to their growing list of high-profile athletes including seven-time Tour de France winner Lance Armstrong, NFL Quarterback and 2007 Heisman Trophy winner Tim Tebow, world-record breaking mountain climber Jordan Romero and USA National Women’s Soccer Team Captain Christie Rampone.  Equally exciting for FRS is to be able to show support for elite amateur athletes ? athletes the fans can rally behind because they too can relate to the pressures of everyday life while trying to maintain a healthy active lifestyle. See the full line of FRS? Healthy Performance? products at www.frs.com.
The US Military Cycling Team is an elite and development racing program for military athletes funded solely as a non-profit charity through the sponsorships and donations of our amazing supporters. The soldier-athletes selected to race for the US Military Cycling Team set the example within their units and to race fans across the country, demonstrating that it is possible to maintain a healthy lifestyle, even compete competitively at the highest levels of sport, while balancing other responsibilities. FRS supports these and all athletes in their pursuit of greater performance through healthy lifestyle choices. www.usmilitarycycling.com
The 2012 US Military Elite Team Roster is:
Air Force Captain Dan Cassidy, San Antonio, TX
Air Force Captain Jason Peterson, Vacaville, CA
Air Force Lieutenant Trevor Johnson, Little Rock, AR
Air Force Lieutenant Jay ShalekBriski, Enid OK
Navy Ensign Peggy LeGrand, Goose Creek, SC
Air Force Master Sergeant Andy Chocha, Shreveport, LA
Navy Petty Officer Shawn Olin, San Diego, CA
The Elite Team is backed up by a roster of twenty-two development riders, six development women, and seventeen masters racers. All riders in the elite and development programs are active military, with only the masters team including retired or separated soldier-athletes.
In addition to local and regional racing across the country, expect to see US Military Team athletes at our 2012 Elite focus events of: Sea Otter Classic, Wilmington GP, Tour of Somerville, International Cycling Classic/Superweek, and Green Mountain Stage Race.
The Foster City California based FRS Company produces a full line of performance products powered by their patented blend of Quercetin, a powerful all natural antioxidant, with green tea catechins, and essential vitamins that serve as a natural energy and endurance booster. www.frs.com 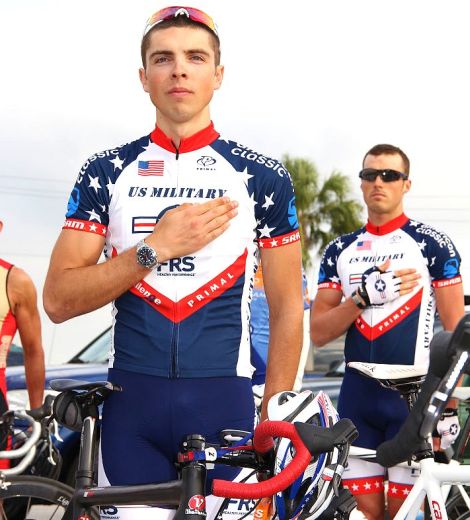