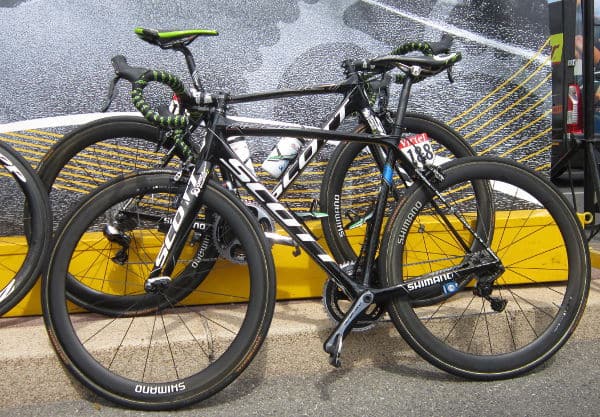 Share
Scott Bikes has officially unveiled two new road bikes: the endurance-oriented Solace and the re-designed Addict which was rolled out at the Tour de France.

As the dog days of summer continue to roll along, so too do the official rollouts of all-new and updated bikes and products from a variety of cycling manufacturers. Scott Bikes invited RBA to Deer Valley, Utah for ScottWeek, the brand’s official North American release of its 2014 range of bikes, components and accessories. Chief among these new releases was the unveiling of an all-new endurance road platform called the Solace, as well as a complete re-design of the brand’s popular Addict race bike. 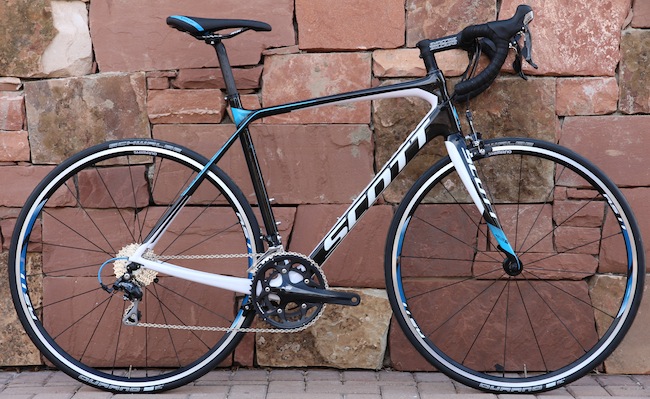 SOLACE: ‘THE SOURCE OF COMFORT’
The Solace represents a new venture for the Swiss brand. The Scott catalog has consistently showcased performance-oriented road bikes in the form of the Addict, CR1 and Speedster, as well as the aero road Foil model. But there’s been one category whose absence has been conspicuous over the past few years, if only because many of Scott’s major competitors have released new models to fill this niche. We’re talking about the dedicated ‘endurance road’ category, comprised of decidedly comfort-oriented road bikes that put an emphasis on frame deflection over maximum stiffness, and more upright positioning and relaxed geometry over aggressive fit and racy handling. 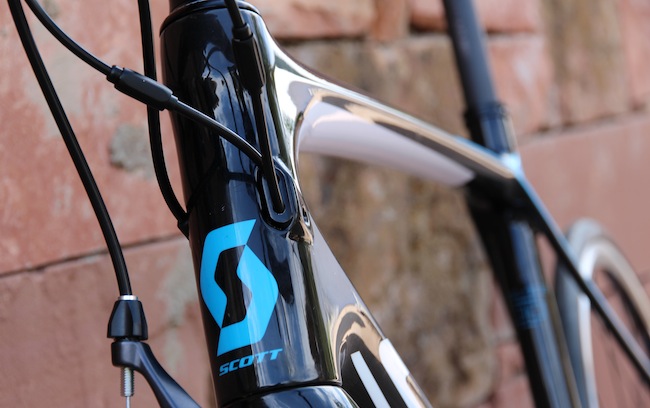 The Scott Solace features internal cable routing that can accept either mechanical or electronic drivetrains via a system of grommets, like one on the headtube.

While the venerable CR1 model has functioned for some time in Scott’s lineup as a more comfortable option than the aluminum Speedster and the old carbon Addict, it was never intended to serve as a dedicated endurance road bike in the vein of many contemporary offerings from other brands like the Specialized Roubaix, Trek Domane or Cannondale Syanpse. That’s where the Solace comes in, and it’s an entirely new platform built from the ground up and was two years in development. ‘Knowing what we do about carbon fiber technology, we were confident that we could create a new bike with a truly ideal balance of stiffness and comfort,’ says Scott engineer, Dan Roberts. ‘And although this is our comfort-oriented bike and weight wasn’t exactly our priority, we can say that the Solace is around 200 grams lighter than many of our competitors equivalent models.’ 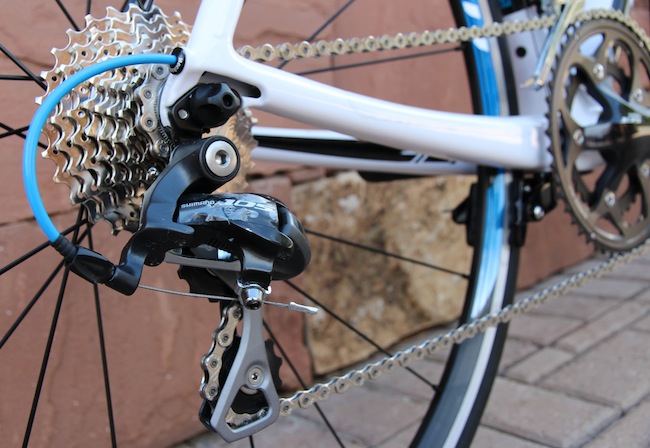 The Solace’s rear dropouts are designed to accommodate internal cable routing for mechanical and electronic drivetrains.

To achieve an ‘ideal balance of stiffness and comfort,’ Scott engineers design the Solace in two halves: the Power Zone and the Comfort Zone. The Power Zone area of the frame consists of the tapered headtube, oversized downtube, PressFit BB86 bottom bracket and the chainstays. These sections of the frame were engineered to be highly stiff structures capable of transmitting power efficiently to the rear wheel. The Comfort Zone consists of a flattened top tube, tapered seat tube and thin seat stays positioned relatively low on the seat tube. These areas of the frame are responsible for deflecting road vibrations away from the rider, and Scott has gone so far as to claim that the Solace is ‘42% more comfortable’ than the CR1. But, of course, ‘comfortable’ is a very subjective term. So what Scott is really saying is that the Solace exhibits 42% more vertical deflection than the CR1 model, measured at the junction of the seatstays, top tube and seat tube. 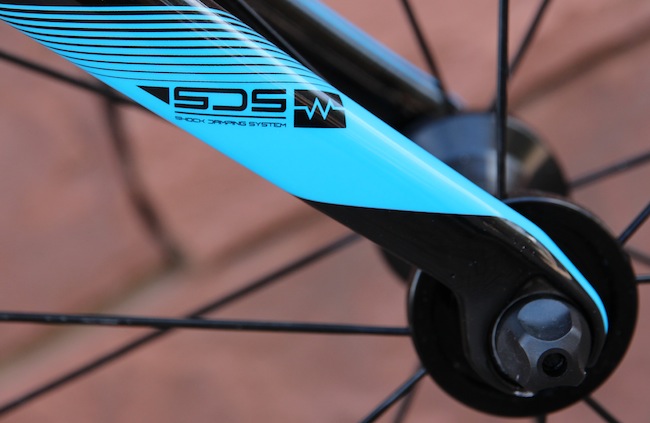 Following in the footsteps of Cannondale and Trek, the fork on the new Scott Solace sports rearward-facing, carbon dropouts to aid in
front-end deflection.

Another noteworthy aspect of the new Solace is integration. Integrated features on the new Solace include internal cable routing for both mechanical and electronic drivetrains (brought about via swappable grommets that ship with each bike), as well as a ‘comfort-specific component spec.’ This spec list includes a Syncros saddle with more padding than models found on other Scott bikes, a Syncros seatpost with a ‘comfort-specific’ carbon layup that aids in deflection, and a Syncros handlebar with a more swept back profile that helps create a more upright riding position. 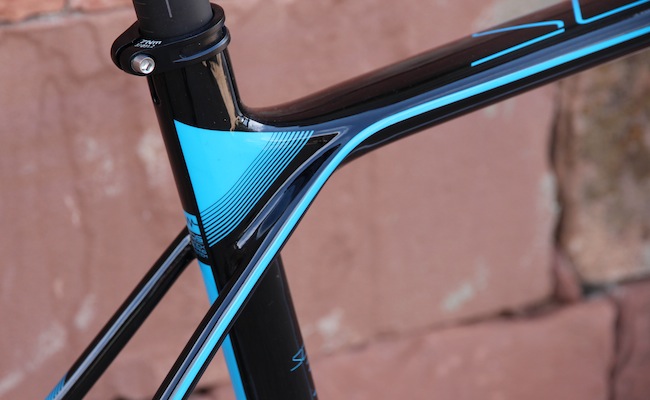 The Solace’s rear brake is positioned underneath the chainstays, a decision that Scott engineer, Dan Roberts, says allowed the brand to ‘optimize the comfort characteristics of the seat stays.’

But perhaps the Solace’s most significant and eye-catching component feature is its rear brake. Rather than mounting the rear brake on a bridge between the seatstays like more traditional road frame designs, Scott opted to place the rear brake underneath the chainstays ala the Trek Madone and others. But while Trek’s primary reason for the chainstay-mounted brake was to improve aerodynamics (and, indeed, Scott engineers concede that the Solace rears some aero benefit from the rear brake positioning), Scott engineers claim that their primary reason for utilizing a chainstay-mounted rear brake is improved comfort. No, the position of the brake doesn’t directly result in improved comfort, but the lack of a brake-supporting bridge between the seat stays freed up Scott’s engineers to optimize the seat tube junction on the Solace to enhance deflection. 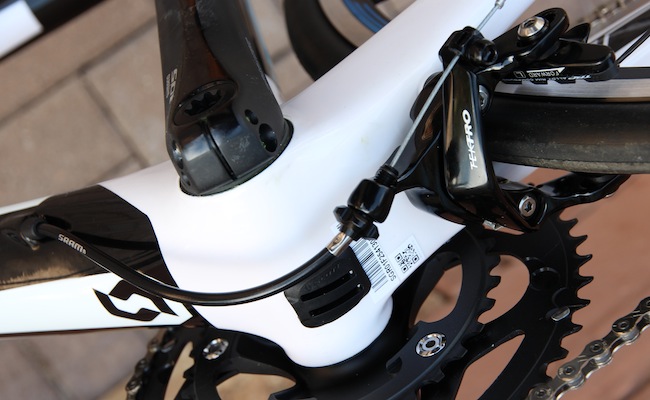 The two-bolt rear brake is mounted underneath the chainstays, a decision made to enhance comfort, but one that also results in an added aerodynamic benefit.

The Solace will be available in 7 men’s sizes and 5 women’s sizes, each with size-specific tube shapes and geometries so that every frame receives a nearly identical ride quality. Prices range from $2549.99 for the Shimano 105-equipped Solace 30 to $9499.99 for the Dura-Ace Di2 9070-equipped Solace premium. 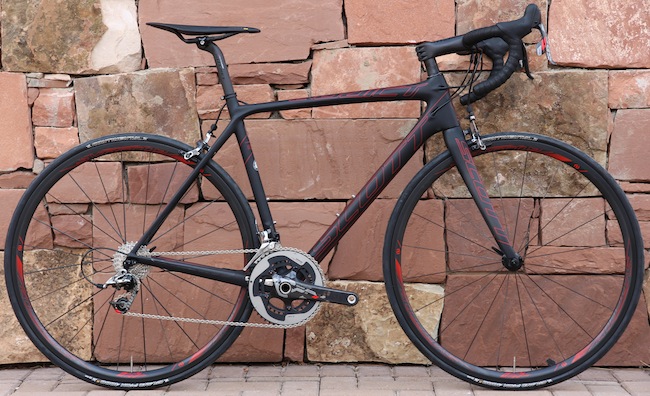 The Scott Addict SL is the brand’s lightest production bike ever, with a frame and fork combination weighing in at a claimed sub-1000 grams. Spec’d with a SRAM Red drivetrain, the top-of-the-line Addict retails for $12,649.99.

The original Scott Addict was released in 2007 and was a top-seller for the brand all they way through 2011. Healthy sales were aided by 149 professional race wins on the Addict between over the course of the 2009 and 2010 race seasons. But, in the hopes of competing with other brands launching bikes into the aero road category, Scott discontinued the Addict. The aero road Foil model was released and immediately became the brand’s flagship race bike. Meanwhile, Scott engineers began re-designing the Addict as a lightweight, top-shelf wonderbike ideally suited for Grand Tour mountain stages (in fact, the bike was rolled out with the Orica GreenEdge team at the this year’s Tour de France) and the panache that goes along with such bikes on the dealer showroom floor. 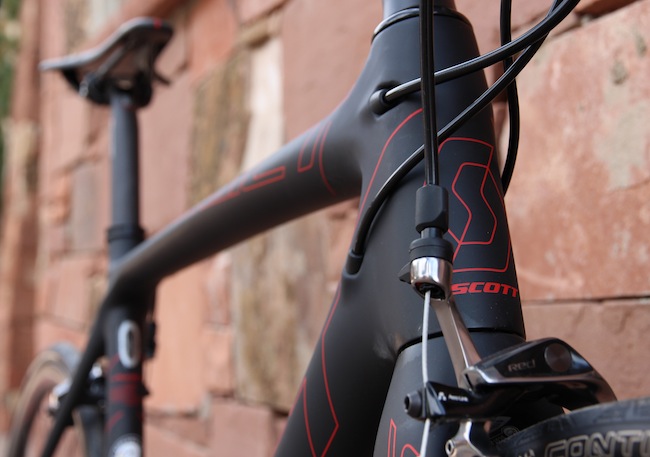 The new Addict sports a tapered, 1 1/8- to 1 ¬-inch headtube and internal cable routing.

At first glance, the new Addict appears rather simple. For example, its tube shapes are a slightly more triangular version of the old Addict’s round tubes. But this is an attribute which Scott engineers say yields a frame produces 13.2% less drag than a round tube set. Likewise, the Addict ticks off all of the boxes we’ve come to expect from the current crop of top-end, lightweight carbon race bikes: a 1 1/8- to 1 ¬-inch tapered headtube, thin seatstays, large bottom bracket shell (a PressFit BB86, in the Addict’s case) and relatively robust chainstays. 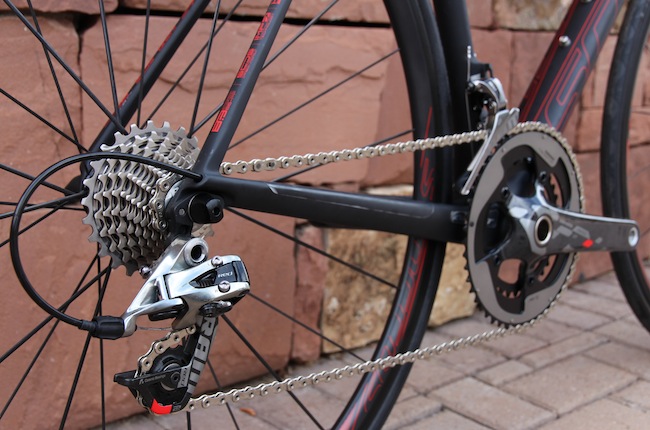 To create a bike that would go toe-to-toe with such competitors as the Cervelo RCA and the Cannondale Evo Nano, Scott utilized a new version of its signature HMX carbon fiber. Called HMX-SL, this carbon fiber, which is utilized primarily in the aerospace industry (Scott is the first to use it in bicycles), features nano resin technology to yield an incredibly low weight while remaining stiff. Utilized only on the highest-end new Addict, the SL, HMX-SL yield a frameset weighing in just under 1000 grams. 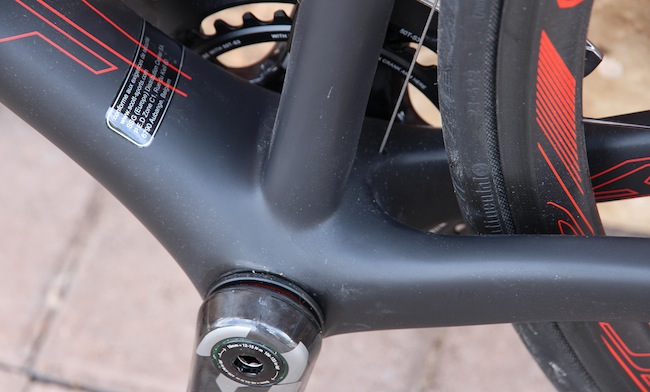