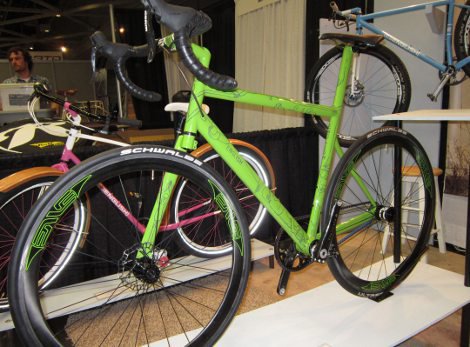 Thanks to the bright green bike that sat center stage, the English Cycles booth is one that caught my eye almost immediately upon entering the convention center. This was the first show ever for Rob English and his wife Misha and to say that he was a center of attention all weekend long would be an understatement. From the Right Side bike to Misha’s sweet pink cruiser, to the aero TT bike and the Project Light Bike, Rob had a stable of bikes on display, each that warranted its own amount of scrutiny and appreciation.

The radical Project Right bike was built for a customer in conjunction with Fairwheel Bikes in Tucson, Arizona. Fairwheel is of course home to some of the most exotic road parts in the world. The bike weighs in at 16 lbs.

It was interesting to find out that besides being a prolific designer/builder, Rob is also a big-time racer. However, despite him being a three-time Oregon state TT champ, in talking to Rob, it’s clear that he sees bicycles as far more than just an solution for our fitness pursuits. Like Craig Calfee, Rob truly believes that bicycles are a solution for a wider world of urban/human challenges. For more info: English Cycles. 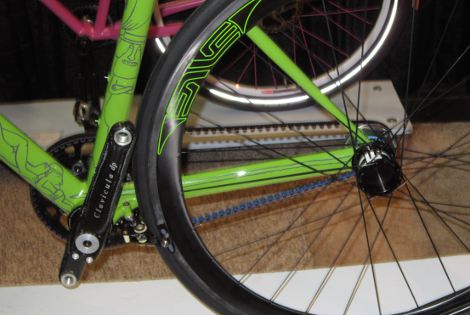 The Right Side Bike uses a mix of Columbus and Deda tubes. The bike was originally intended to be a fixie until the prospective customer found out that true fixies don’t have any brakes. From there the project escalated to the wild creation you see here 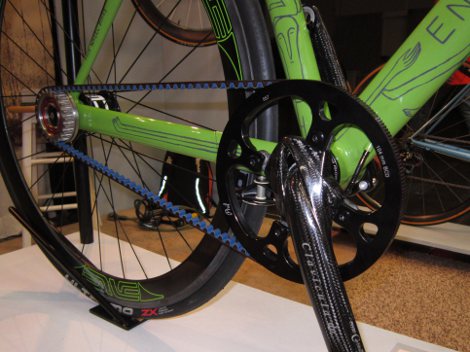 It comes as no surprise that Rob’s bike is outfitted with a variety of German carbon parts…like the Clavicula cranks. 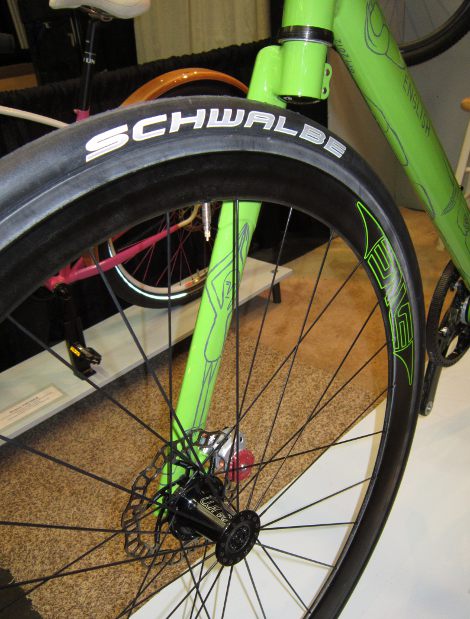 The Enve wheels offset the Right Side bike perfectly. The German made Tune hub needed quite a bit of customization to work. 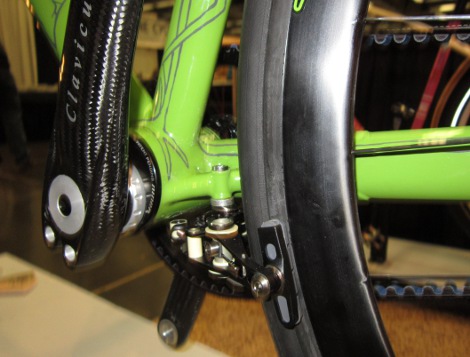 One quick switch of the rear EE brake and it releases for easy wheel removal. The bike also uses a Niner eccentric bottom bracket. 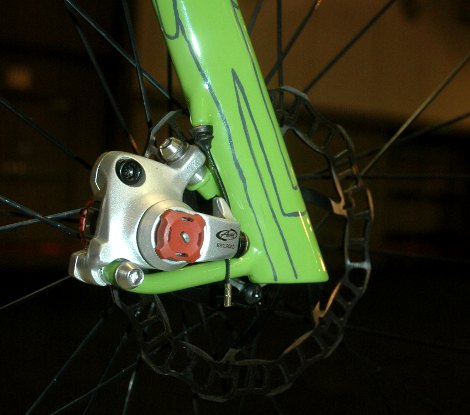 Like the bike itself, the somewhat backwards, upside-down, flipped and reversed Avid disc is proof of the thinking mind behind the bike’s design. Internal cable routing of course and an Ashima rotor is used. 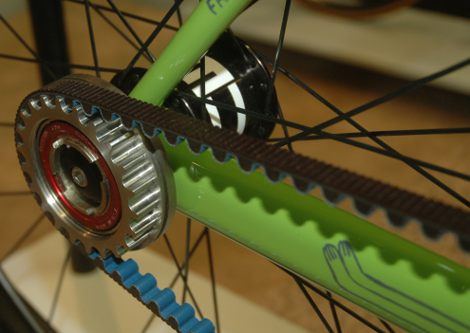 To make the the outboard mount of Phil Wood pulley work, Rob pressed the bearing into the frame. This was just one of many bikes at the show that was using the Gates belt drive. 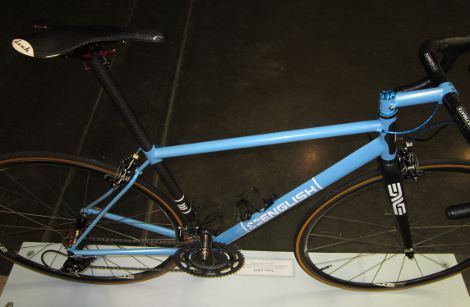 For anyone who believes that there is no future to steel, how about a 10.8 lb.race bike? This bike is based on a full steel model that Rob has raced for years. The addition of the carbon head and set tube pushes the the cost of the frame up from $1950 to $3000. The complete bike would sell for $11,000. 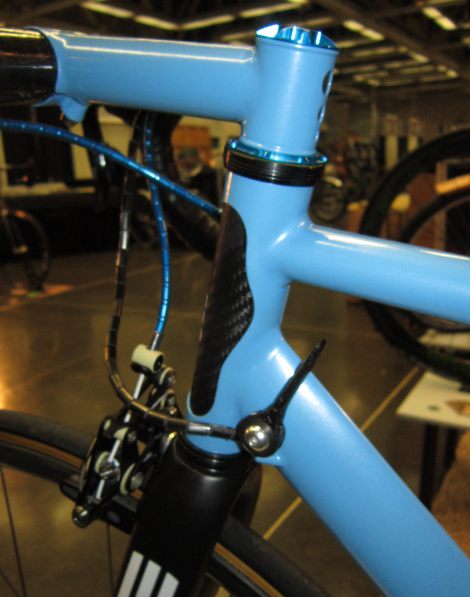 Note the novel placement of the front derailleur shifter. 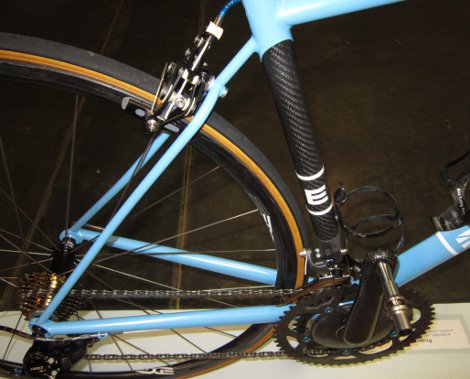 The Light bike is made with True Temper tubing and Rob’s own version of the now highly popular “skinny stays” are indeed on the bulimic side of steel fabrication. Like so many other builders at the show, Rob relied on Enve Composites for his carbon tubes. 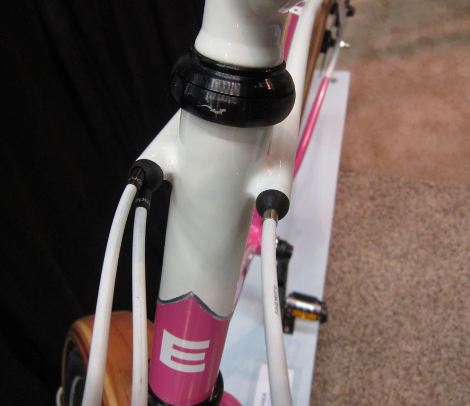 Internal cable routing done about as cool as possible. 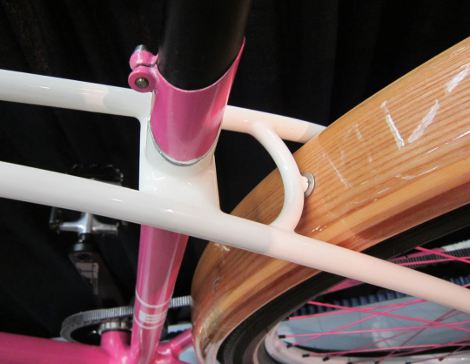 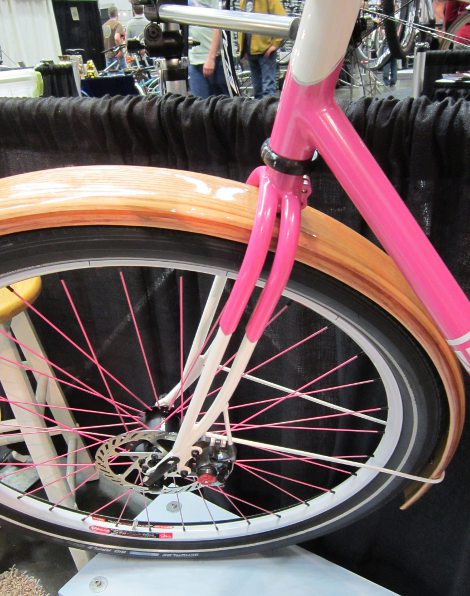