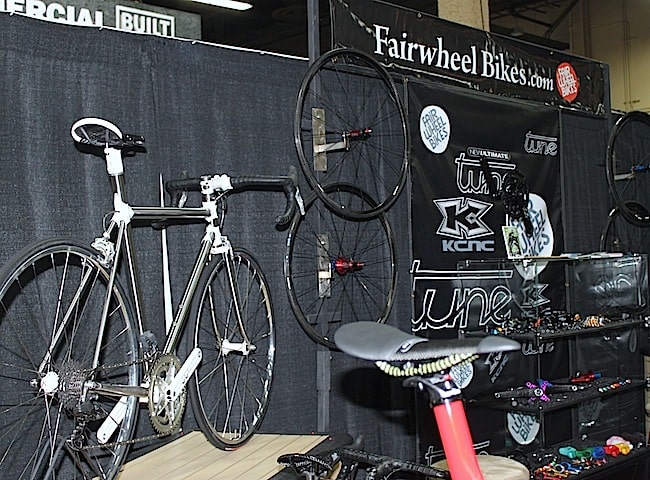 Share
Fairwheel Bikes out of Tucson, Arizona has made quite the name for themselves as a boutique parts importer and a leader in lightweight builds. Traditionally, Interbike is the place where they unveil a show stopper, like the sub-8-pound Litespeed Ghisallo build a few years back, which they then smashed in 2010 with a 6.55-pound build using a custom Spin frame and US-made Dash hubs. This year, Fairwheel didn’t come to Interbike with anything record-breaking, but did bring some excitement with a few unique, and meticulously crafted custom frames built with the exotic parts that they import. 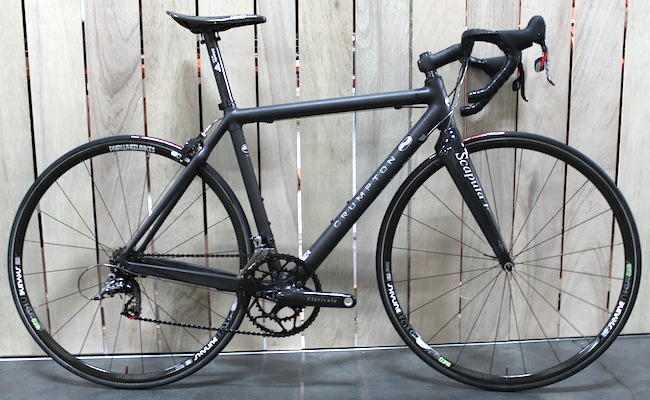 Not everyone wants a sub-9-pound bike, but we haven’t met anyone yet that doesn’t like to look at one. Beginning with a US-made sub-700-gram Crumpton frame, Fairwheel Bikes went with a build the utilized only production parts to make it completely rideable. The handlebar/stem combo is a work of Calfee’s, using a Schmolke handlebar with Enve stem that are then carbon wrapped to create the BarStem. Wheels are Tune Skyline and have Vittoria’s Crono Evo tires glued to them. The complete build puts it at 8.9 pounds and at a price in the $20,000 range.
Calfee Design can turn just about any carbon handlebar and stem into a one-piece setup. The design reduces weight from a standard setup, and increases strength since there is no longer any clamping force on the handlebar. Pricing starts at $300 for the customization. 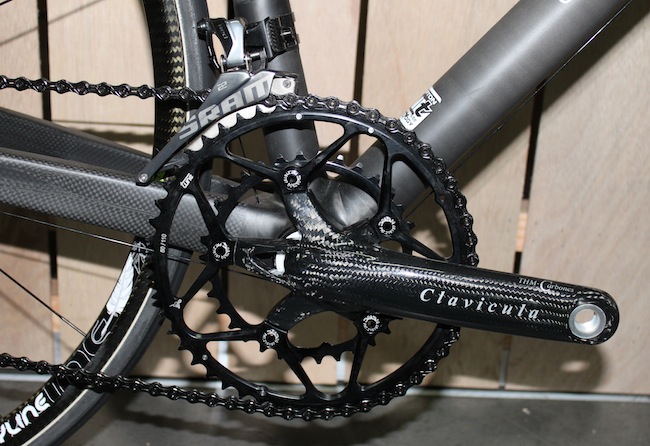 THM are makers of some of the most innovative, and lightest carbon parts available. The Crumpton features a THM Scapula F fork with integrated front brakes, as well as these Clavicula cranks that use a full carbon spindle. 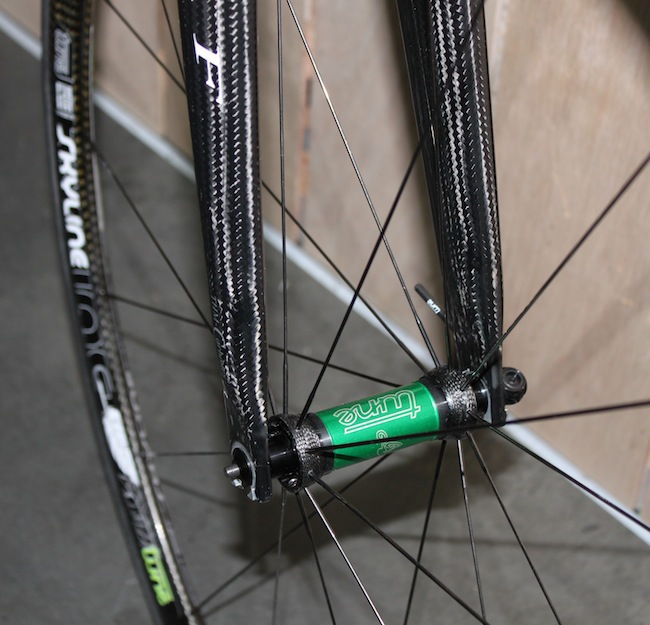 Tune’s 860-gram Skyline wheels might seem crazy light, but they were the choice of Chris Froome on a couple occasions during his Tour de France victory. Tune also has a 25mm deep Skyline clincher with a rumored weight of 965 grams. 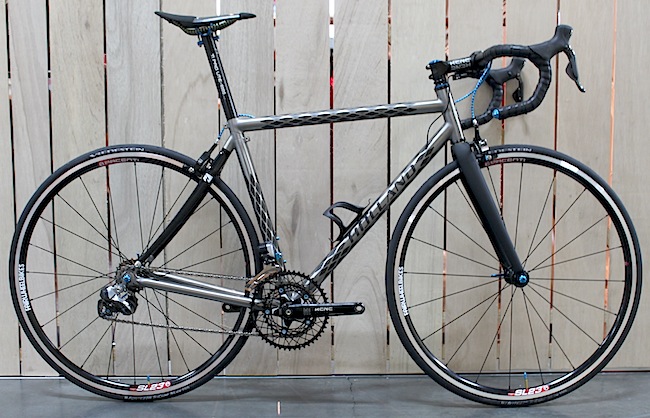 Even though this Holland ExoGrid is quite possibly the lightest breakaway folding bike ever built, its use of durable aluminum components is a testament to its true purpose as a travel bike. San Diego-based Holland Cycles uses ExoGrid tube technology that has the ride of titanium, while gaining torsional stiffness from the inlaid carbon. Its 13.8-pound weight could easily be trumped by going with more carbon componentry, but impact resistance and durability was the focus of the build. 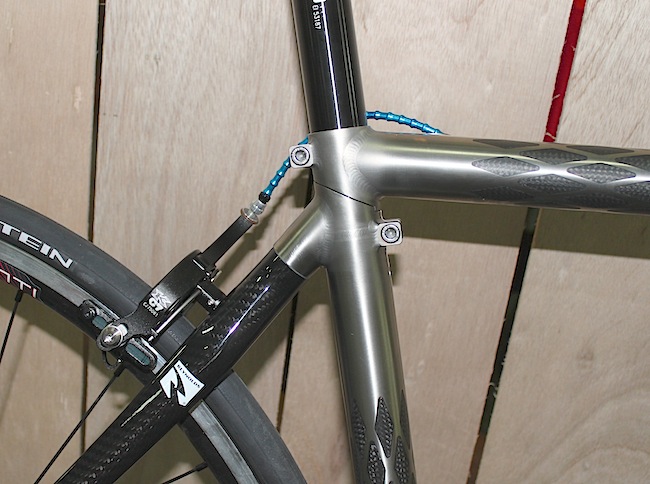 That’s right, the Holland Exogrid is a folding bike, and it does it with the utmost style. Beautiful welds have always been one of Holland’s trademarks and are complimentary of the ExoGrid’s unique aesthetics. 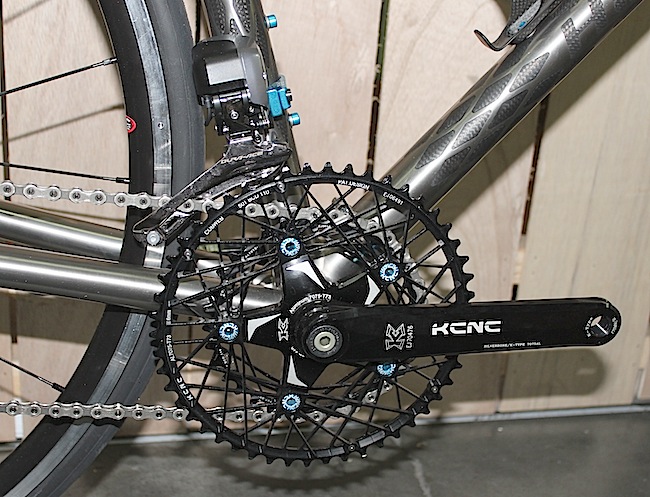 KCNC aluminum cranks with the wild K3 Cobweb chainrings give the Holland an extraordinary look. Way back in 2011 we had the opportunity to review a Holland ExoGrid, read about it here. 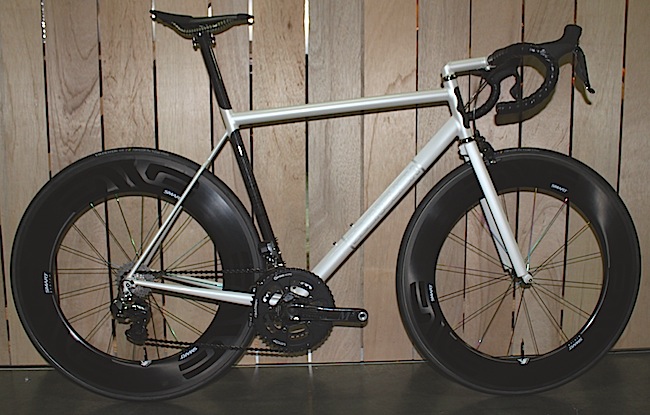 Jason Woznick of Fairwheel Bikes told us that when they have a project idea that no frame company wants to take on, they call up English: ‘He’ll do anything’, said Woznick. In this case, the aluminum aero frame uses a carbon seat tube and has a reverse steerer tube system, which is affixed to the stem rather than the fork. 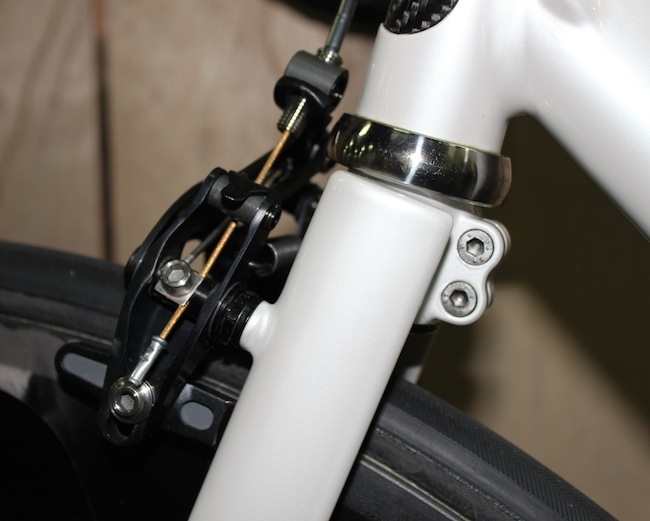 The fork clamps to the steerer at the crown and creates about the most unique front-end design we’ve seen. Prototype EE direct mount brakes made their debut on the English on the front and rear. 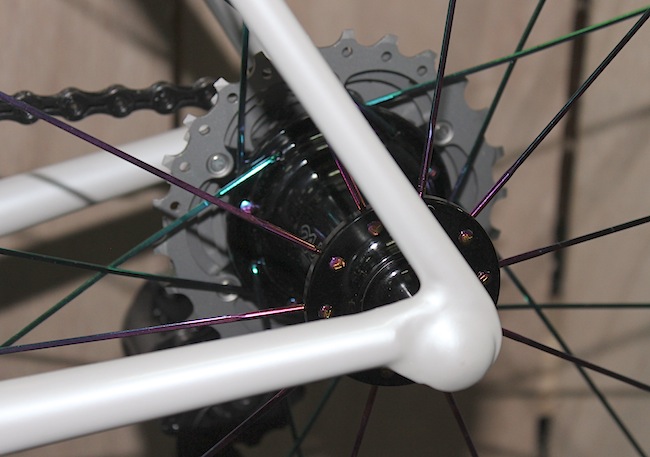 Another one of the many noteworthy features on the English are the left side dropouts, which takes away the need of a quick release nut since a threaded nut is built into the frame. Small details and art-like frame creations like this are helping the North America Handmade Bike Show to grow at record levels each year.