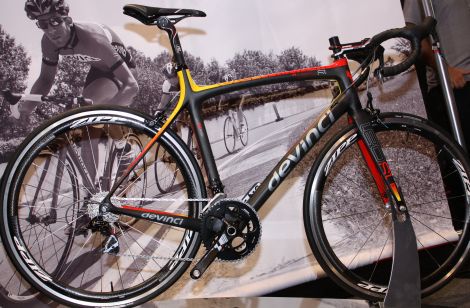 Share
Even more prevalent than at last year’s Interbike trade show is the presence of a variety of new and updated road bikes for 2012 at this year’s event. Devinci is based in Quebec, Canada and they’re bringing their road bike line stateside to the U.S. in 2012. The Leo SL is their top-of-the-line model and it can be had in a variety of build options. The full carbon frameset can include such parts as Mavic, Easton or Zipp wheelsets, as well as SRAM Red, Shimano Dura-Ace mechanical or Ultegra Di2 drivetrains. Retail price for a complete bike will begin somewhere around $4500. 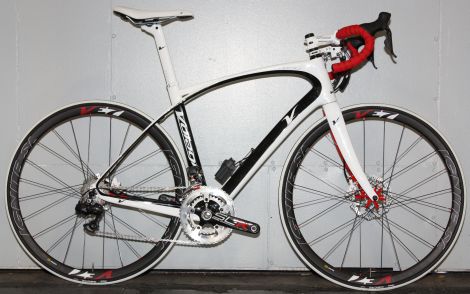 We recently tested a Volagi Liscio with a mechanical Dura-Ace drivetrain and mechanical disc brakes – look for that in a future issue of RBA. And during our testing, we postulated if and when Volagi would incorporate some sort of hydraulic brake options in their lineup. We didn’t have to wait long for an answer as the company has revealed two new build options that will include hydraulic disc brakes, courtesy of TRP in the form of their stem-mounted Parabox first seen at this year’s Sea Otter bike festival in April. 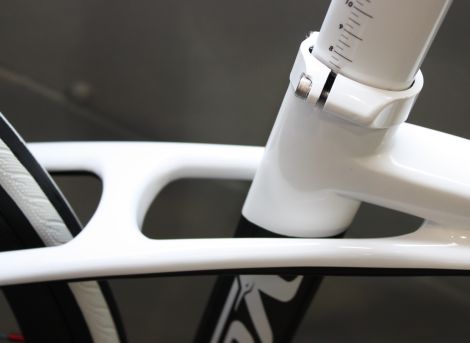 Like all of Volagi’s Liscio models, the 2012 versions feature their signature Long Bow Flex seat stays, which we’ve found in our testing to aid in producing a vertically-compliant ride by deflecting road chatter away from the seat tube. 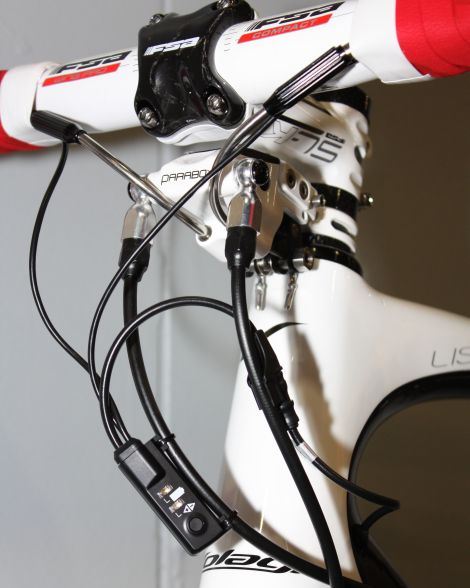 This glossy white Liscio will come standard with a Shimano Ultegra Di2 electronic drivetrain, Volagi’s proprietary carbon clincher wheels (featuring a new and improved carbon layup for 2012), and will retail for $5945. Volagi’s committed to this predominantly white colorway, completing the build with a white FSA handlebar and a white TRP Parabox cable-to-hydraulic conversion box (mounted under the stem). 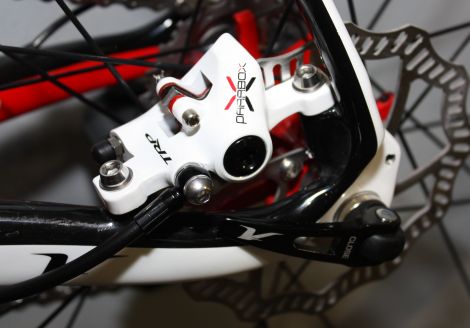 There’s still more shiny, white paint on the TRP brake calipers, which are nestled cleanly between the chainstays and seat stays. Although Volagi’s big news involved their offering hydraulic brake-equipped models for 2012, the San Francisco-based company will still offer select build options of the Liscio with Avid mechanical calipers for those with smaller budgets. 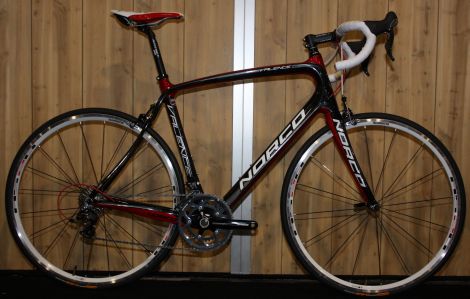 Norco unveiled an entirely new road bike for 2012. The Valence is the Canadian company’s entry into the “endurance road” category, which features a longer wheelbase than their CRR road race line, as well as a taller headtube and a BB30 bottom bracket. 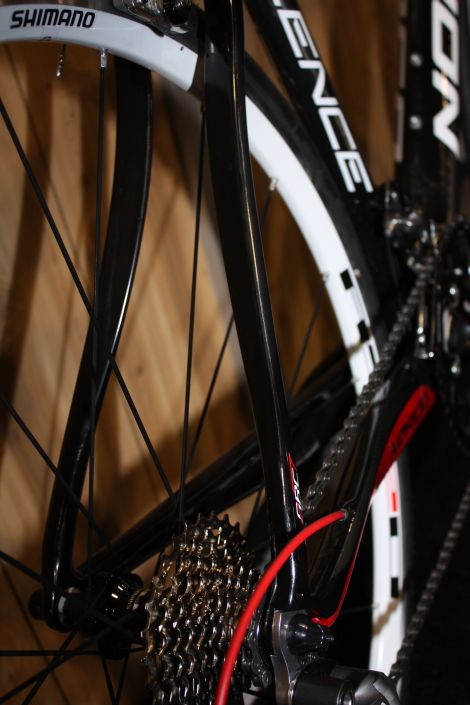 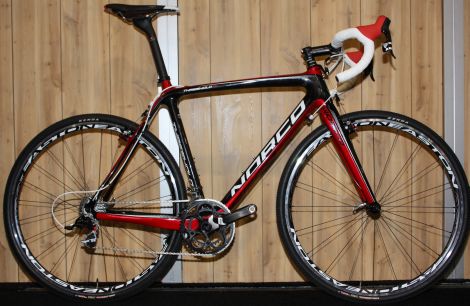 The Threshold is an all-new carbon fiber cyclocross model that is on tap for 2012, with three build options and prices starting at $2449. 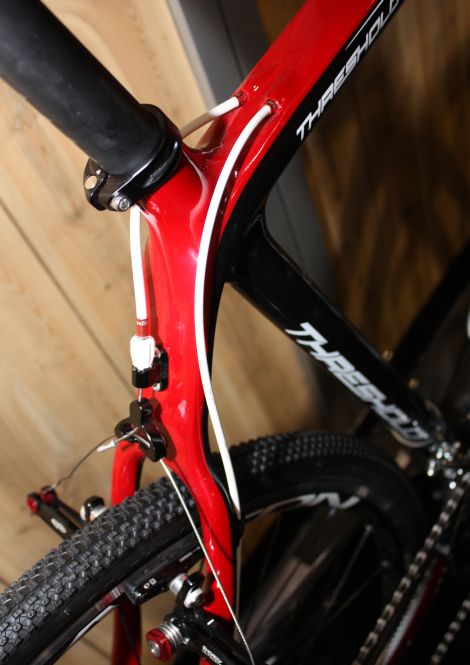 Internal cable routing through the top tube comes standard on the Threshold, ideal for shouldering the ‘cross bike during off-the-bike climbs and barrier hops. 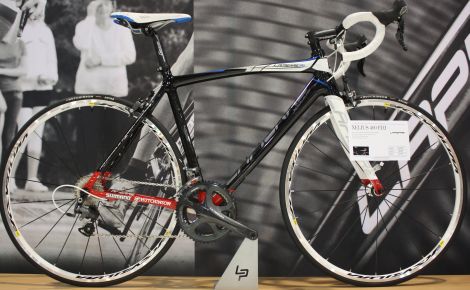 Lapierre‘s 2012 Xelius 400 carbon race bike comes with an Easton EC90SL fork with a carbon tapered steerer, Mavic Ksyrium Equipe wheels and a Shimano mechanical Ultegra drivetrain. Retail price is set at $3990, and the Xelius 400 can be had in the latest Francais Des Jeux pro team livery. 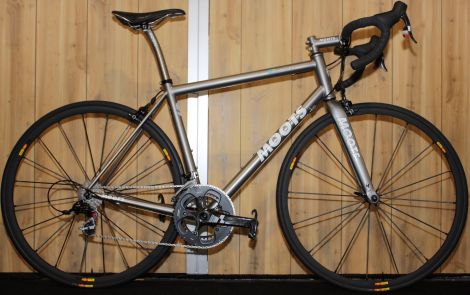 RBA‘s own Neil Shirley went out and crushed the Strava record for the Tour of Lake Mead climb Tuesday morning, despite battling a lightning storm and torrential rain. And he did so on Moots‘ latest titanium Vamoots RSL road bike. Largely unchanged for 2012, the newest Vamoots features a monocoque carbon fiber fork for improved front-end ride quality, as well an optional 44mm head tube designed to increase front end stiffness. 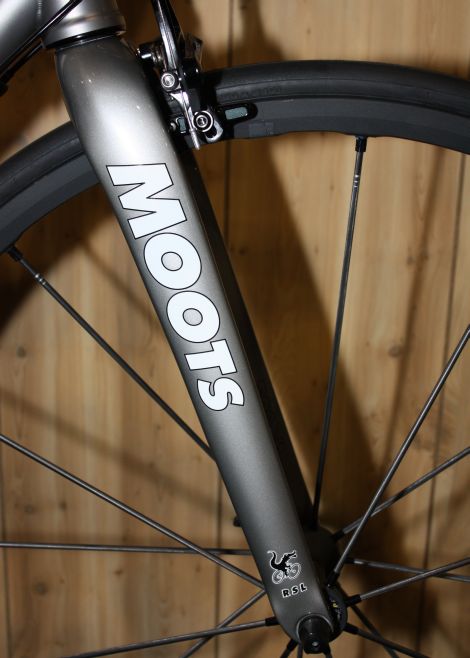 The Vamoots RSL carbon fork is straight and stout, yet still helps provide the bike with that famous ride sensation that Moots fans rave about. 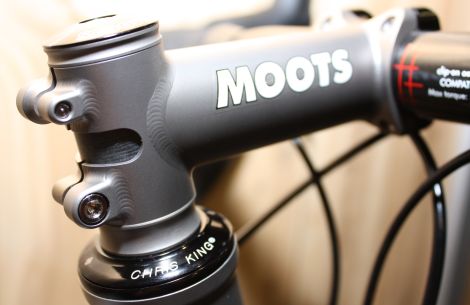 Some of the latest cosmetic details from the artisans at Moots include new RSL spacers that feature an aesthetically-pleasing curved design. 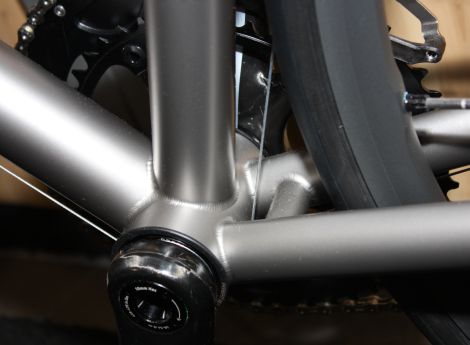 The titanium tubing used in Moots bikes is made in the United States, and the bikes themselves are welded by hand in Colorado. Check out the oh-so-clean welding found on the Vamoots bottom bracket shell. That’s craftsmanship. 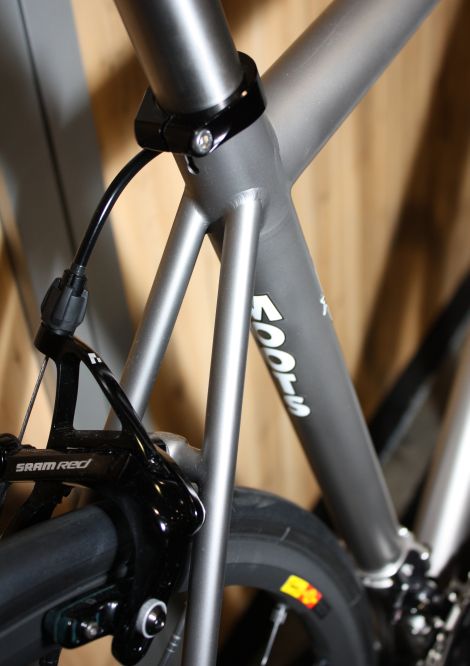 Moots artistry continues at the Vamoots RSL seat tube junction with a subtle seat post clamp design and thin seat stays. This display bike was built with a SRAM Red drivetrain and Mavic Exalith wheels, but Moots is especially well-known for their custom frame and build options. 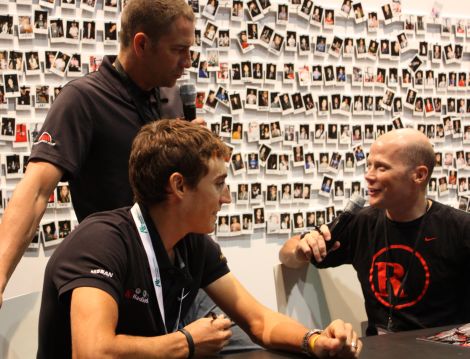 No matter what it seems, you’ll always see Chris Horner smiling. The Radioshack rider and 2011 Tour of California winner was on-hand at Interbike Thursday signing autographs at the massive SRAM booth. Alongside him was teammate and current U.S. National Road Race Champion, Matthew Busche and SRAM’s main marketing man Michael Zellman.
Be sure to check back for more of RBA‘s continuing coverage of Interbike 2011!