Depending on your level of knowledge of either cycling history or youthful fashion trends, Carrera should be a well-known name brand to you. For cycling fans, Carrera was the title sponsor of a powerhouse team through most of the ’90s, with a range of top riders like Stephen Roche and Marco Pantani flying the Carrera logo on their respective leaders’ jerseys. Then as now, Carrera also remains a popular name in the world of overpriced denim jeans. Denim to bikes? Just how does that work, you might be asking yourself. The short story is that back in 1989, the team’s legendary owner, Davide Boifava, sought to extend the branding of the team sponsorship to include bikes as well. Fast-forward two decades later and today his Podium Cycles bike shop in Brescia, Italy, also acts as the domestic race shop/bike factory. Though the team is no more, the bikes live on with a variety of interesting models. 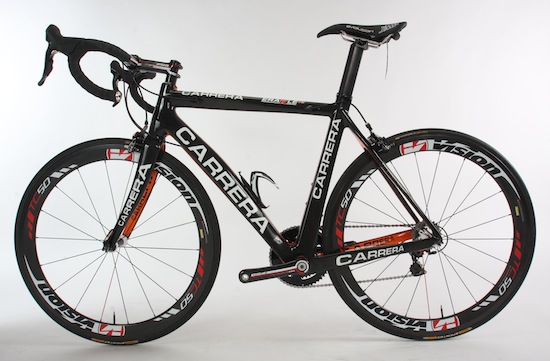 THE FRAME
Carrera actually makes two different models of the Erakle. Our TS test bike is the less expensive of the two and sets itself apart from the higher-end Erakle by virtue of its Asian production, two fewer frame sizes, a standard seatpost and less expensive carbon. The TS is built with a high-mod carbon using the more common monocoque system, whereas the Erakle is constructed using the more labor intensive, tube-to-tube process that also allows for custom geometry. There’s not a standard round tube to be found on the Erakle TS, and the entire frame is finished off with a 1K cosmetic weave. Frame construction is first-rate, with the cable routing and shallowed-out backside of the seat tube being the two most noticeable and appreciated detailed touches. Both the Erakle and Erakle TS, in addition to most of Carrera’s 2013 frameset offerings, are electronic drivetrain compatible.

Other than the fact that our bike was built as a team replica of the bikes used by the Belgium-based Accent Pro team, we weren’t sure why anyone would slather a frame so completely with graphics. We were pleasantly surprised to find that even on the Asian-made Erakle TS, Carrera still offers additional custom touches beyond the four stock color choices. Not only with custom paint, but the graphics, too, in case, oh say, you wanted the frame to say Carrera something less than the 15 times it does on our test bike. 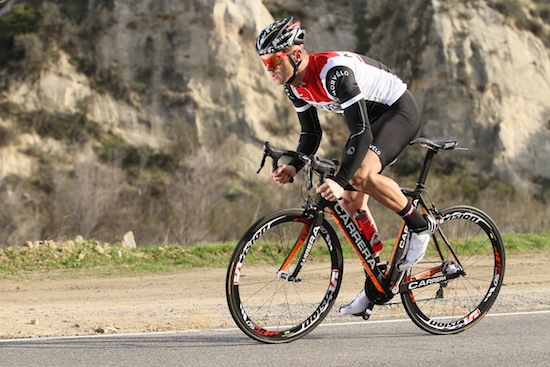 THE PARTS
As required of a team issue bike, our Erakle test bike was spec’d with all the parts found on the Pro Continental Accent team’s, albeit from the 2012 season. The heart of the parts kit is the Shimano Dura- Ace drivetrain that is coupled with a full assemblage of FSA bits, including a K-Force Light carbon crank, K-Force brakes, K-Force carbon stem and handlebar, headset, and bottom bracket. The aero carbon seatpost is a homespun item from Carrera, with a trick rear mount and dual bolt binder.

Radical to the eye as it is, the Selle SMP saddle received flying colors, not only for the handy length of the rails, but also for the one attribute most crucial to a saddle-comfort.

THE RIDE
Unlike the Colnago (see page 64), no rider came back clamoring to ride the Erakle for a long stint of up to five hours. Remember, this is a race bike, and, as you might’ve guessed, it was designed to be stiff. As in, the stiffer the better. Of course, it doesn’t take the keen eye of a detective to realize as such. One quick glance at the tube shapes and massive bottom bracket junction tells all. And how about the chainstays that taper from 45mm tall at the bottom bracket yoke to 33mm tall at the dropout?!

Not since we rode our first pair of Mavic Exalith wheels last year that screeched louder than an impaled wicked witch under braking have we ridden a bike with almost as loud a brake squeal. Although the braking power of the SwissStop pads and Vision TC50 (tubular) wheels never diminished, it was loud. As with the Mavic wheels, it’s important to nail the correct brake-pad toe-in to avoid the screeching. 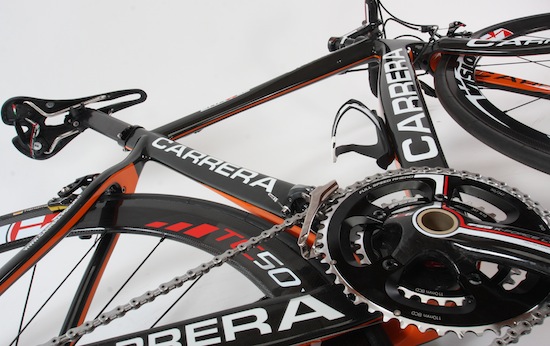 THE VERDICT
Although the fabled Carrera team no longer survives, it is rewarding to know that the original principals of the team are still together and still obsessing over not only racing, but designing and building bikes to be better at it. Without a doubt, the Carrera came away as the best bike for the steely-jawed racer types among us. Beyond the stiff ride, though, everyone came away impressed with the detailed execution found throughout. Cable routing may not be the one feature that makes you buy a bike, but the internal routing on the Erakle gives you the added confidence that someone was minding the details. Very sharp. On top of that, we were happy to hear that Carrera will replace and/or repair any frameset that fails due to manufacturer’s defects in materials or workmanship for a full three years from date of purchase by the original owner.