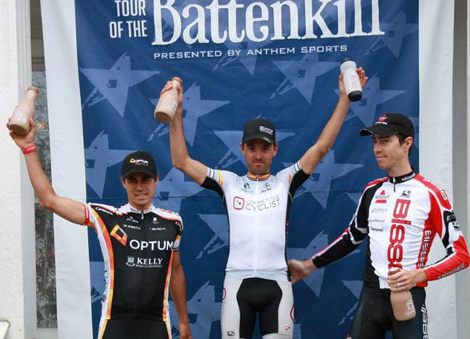 Optum Pro Cycling p/b Kelly Benefit Strategies’ Jesse Anthony finished in second place yesterday for the second consecutive year at New York’s UCI 1.2 ranked Tour of the Battenkill. Teammate Mike Friedman finished fifth after a strong day in the saddle at the year’s first UCI ranked race on U.S. soil. Upstate New York’s Tour of the Battenkill is widely considered the most physically taxing one-day race in the country – The 200 kilometer course is combined with the Eastern seaboard’s unpredictable spring weather and 16 sections of dirt and gravel for an event truly not for the faint of heart.

“At a race where the majority of the peloton doesn’t finish, it is definitely a full team effort to deliver Jesse to the Battenkill podium. Everyone rode incredibly strong today, and it was clear from the gun that everyone was willing to work as hard as possible to get someone a chance to win the race.” said Performance Director Jonas Carney.

Anthony rode to the line as part of a three-man move that included Jeremy Vennell (Bissell Pro Cycling) and Francisco Mancebo (Competitive Cyclist). This move, which comprised the final podium, came after Mancebo attacked a 10-man breakaway at the base of the race’s final uphill dirt section on Stage Road. With only 10 kilometers left to go in the race, and riders reaching their physical and mental breaking points, Anthony and Vennell where the only men with the legs to respond to the attack.

“Our team always races to win, and after Vennell, Mancebo and I separated ourselves from the rest of the group, I knew I was in a good position to win the race, but I couldn’t quite pull it off,” said Anthony. “After Mancebo jumped around the final turn, I was looking for Vennell to hold the wheel, and he was looking at me to close the gap, so I think we may have played the game a bit too much before the sprint. It’s tough to swallow, but it’s also always an honor to be on the podium, and the team rode incredibly strong today to set this up. It’s tough to win races, especially on a course like this.”

Mike Friedman, known to embrace the challenges of the attrition style racing found at the Tour of the Battenkill, finished just 25 seconds behind the lead group. Friedman, teammate Marsh Cooper, and the rest of the team were aggressive early in the race, taking the front 60 kilometers into the course. The orange and black did the bulk of the pace-making through roughly 20 kilometers of dirt and gravel sections, work that would help shatter the race completely.

“In the US it’s not often that we have a chance to compete in a road race like Battenkill,” said Performance Director Jonas Carney. “It’s an incredibly difficult course, and the dirt sections make for a brutal day. Our guys love racing in adverse conditions and they always rise to the occasion. That’s why we decided to take the front early in the race, and ride as hard as possible through the gritty parts.”

The peloton, numbering 153 riders at the start line, was whittled down to only 59 finishers. Well over eleven minutes separated Anthony’s podium-bound trio and Friedman trailing five-man group from the rest of the finishing riders.

The majority of the Tour of Battenkill squad heads across the world on Wednesday, after stretching the limits of the word “rest”, to compete in the 8-day, UCI 2.2 ranked Tour de Korea. Carney is eager to arrive on foreign soil with a strong team that includes Battenkill warriors Friedman and Anthony, who finished first and second (as competitors, Friedman with the Jelly Belly team) at the Tour of Korea in 2010.

“We leave soon for the Tour de Korea and it looks like we will have a very strong roster for the race,” said Carney. “Mike Friedman and Jesse Anthony were the majority of the podium in Korea in 2010, and coming off their performances at Battenkill, I know they will be eager for more hard stage racing.”

Kelly Benefit Strategies is a group insurance brokers and consultants that specialize in healthcare, and is a division of Kelly & Associates Insurance Group, Inc, headquartered in Hunt Valley, Maryland. KBS serves thousands of employers ranging in size from small businesses to Fortune 500 companies and is committed to bringing its customers affordable group benefits through innovative benefit design, management, and administration. Visit www.kellybenefitstrategies.com for more information.