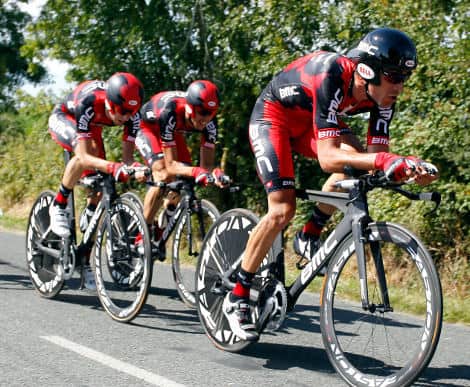 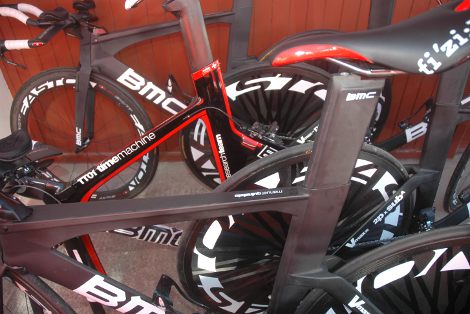 As they prepared for the 2011 Tour de France, BMC Racing has the enviable position of being a team in flux when it comes to bike choice for the time trials. While some teams are aboard bikes that are clearly dated in terms of embracing the most current aero trends in the sport, BMC has two versions of the ultra-modern timemachine TT01 to rely on. 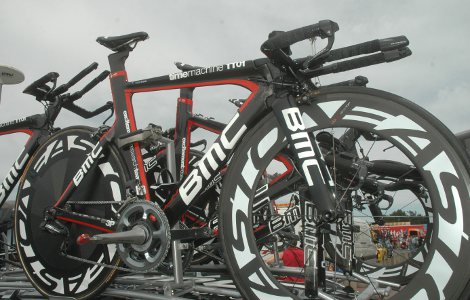 As testament to BMC’s look-ahead R&D, even though the “old” TT01 was first introduced in 2004, the Swiss made bike still has the look and feel of the most modern TT aero bikes. 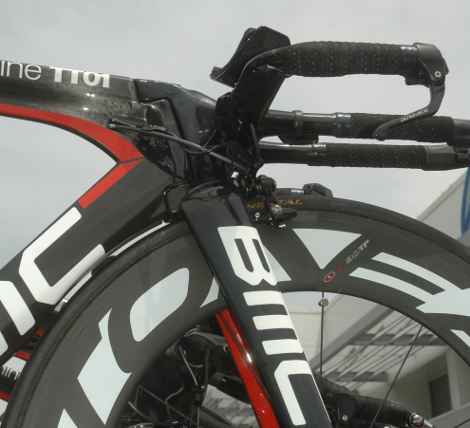 Cadel Evans has always been all about having the lowest positioning as possible and there is no better evidence of that than when you compare the stem and handlebar on his bike with that on the bike below.

The level of adjustability in rider positioning is impressive. Note the front brake?

BUT, WHAT ABOUT THE NEW BIKE? 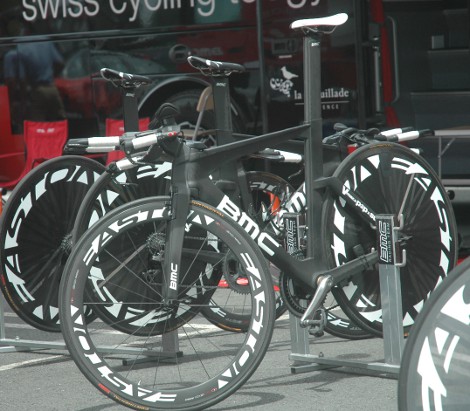 Here’s the newest TT bike in the BMC stable; the totally re-designed TT01.

“BMC has a history of rescinding the Laws of Physics. The timemachine TT01 set new standards in time trial bike technology when it was introduced to the market in 2004. Over the last years BMC engineers together with the BMC Pro Athletes kept testing and pushing things to the limit. The result is a significant data and feedback collection and research alongside the expansion into the triathlon market. It is BMC’s latest innovation which has set the ultimate goal for itself: Maximum speed – Vmax.

Limits have been quickly reached in the past in terms of adjustability of the time trial bike position. This limitation may work for a time trial cyclist who focuses on aerodynamics and power output. Triathletes, however, have very different needs for their bike leg experience. They need to be comfortable enough on the bike to hit the run as relaxed and lose as possible. They look for the best blend between comfort and aerodynamics, for adjustability of their bike position that they tend to tweak regularly.
BMC has made an engineering effort to meet those adjustability needs. Through the BMC tri angle concept and 21_21 offset seat post BMC has enabled the TM01 to achieve over 40 different positions.

Minimum surface: subA ? maximized Aerodynamics through tripwire, truncated profile technologies and system integration.
The art and science of aerodynamics is all about minimizing the surface that gets in the way of airstreams. Aerodynamics is a complex art with many different variables playing their role in minimizing wind resistance. It is the rider’s body, the wheels, the components but also the bike frame that have a significant effect on the overall efficiency of the rider-bike-unit.

Vmax in action
The official product launch of the TM01 Project is held at the opening stage of the 2011 Tour de France on July 3rd. The BMC Racing Team will line up on its TM01 bikes to support Australian team captain Cadel Evans. A week later in Germany, BMC’s triathlon standout Andreas Raelert will give his TM01 debut at the Challenge Roth where he is aiming at setting a new world’s best time at the ironman distance.”

Yeah, that’s all pretty fluffy and vague, but that’s all that was released about the prototype bike – no price or availability dates yet! 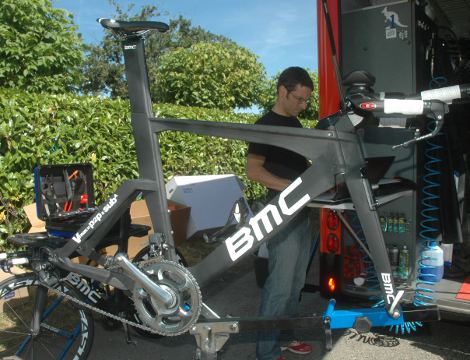 Evidence of their newness, when we cruised through the BMC pit two days before the stage two TTT many of the new bikes were still being built up. 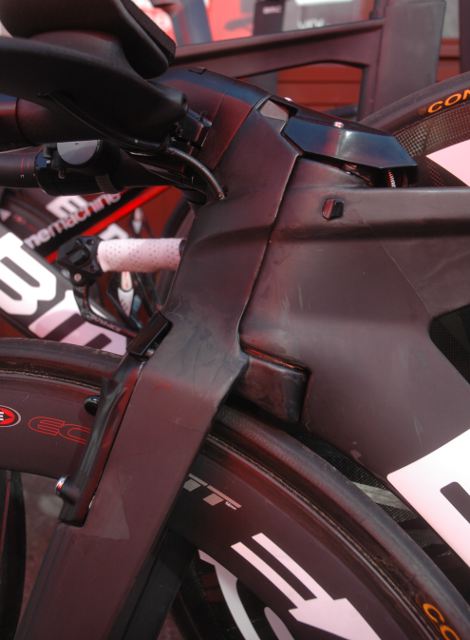 The detail and engineering work that obviously went into building the new BMC TT bikes is nothing short of a revelation. 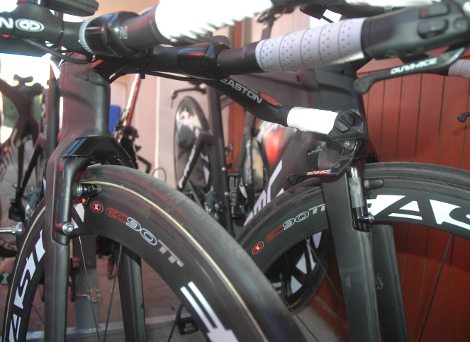 From up front you can see the new integrated design of the front brakes. Although still mounted on the front side of the fork (as opposed to the rear mount position which seems to be growing in popularity), the custom made brake runs perfectly within the fork’s profile. 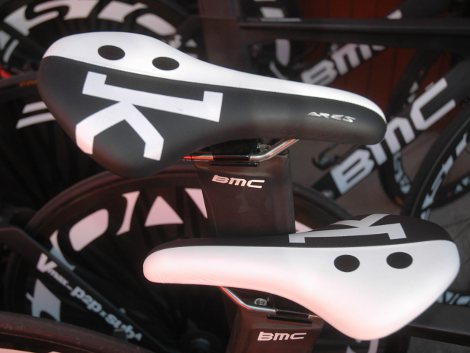 While a variety of Fizik saddles are used throughout, most of the TT bikes use the short Ares saddle. 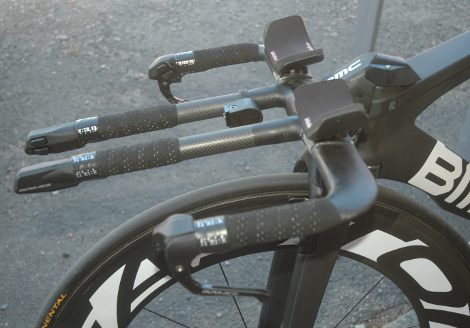 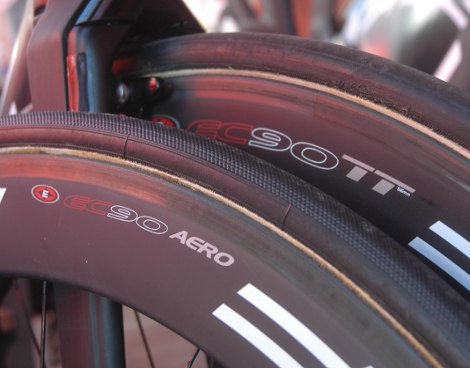 Like Trek who has no Bontrager rear disc to call their own, the BMC squad goes elsewhere for rear wheel duties. However, for front wheels they have two different Easton wheels to choose from; the EC90 Aero and the EC90TT.  What’s the big difference between the two wheels? While the rim sections are the same…. 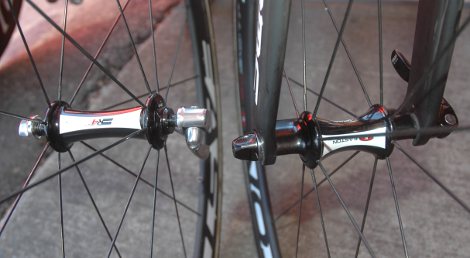 the front hubs are completely different. The EC90 TT has a narrower hub with aero spacers which Easton claims reduces the frontal area by 50%. The EC90 Aero runs a more standard width hub that provides more stability. The front wheels sell for a cool grand and can be joined by a  rear wheel with a combined weight of 1425 grams. 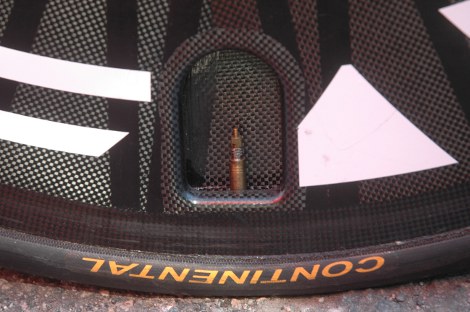 Again, like Trek, BMC racing buys the wheels they need and then logo them up as a promo exercise only. The carbon cave built around the valve stem shows an impressive level of detail design and craftsmanship.
Continental tires make the whole ship go round and round. 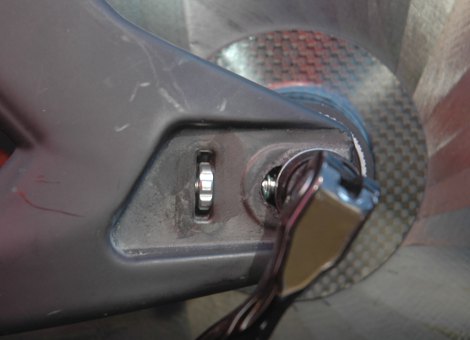 Like many other bikes we spotted in the pits, the new BMC also runs with adjustable rear wheel positioning via a small dial in front of the skewer. 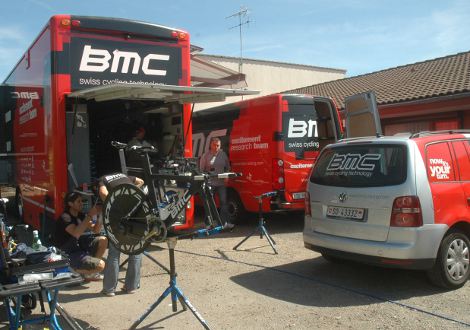 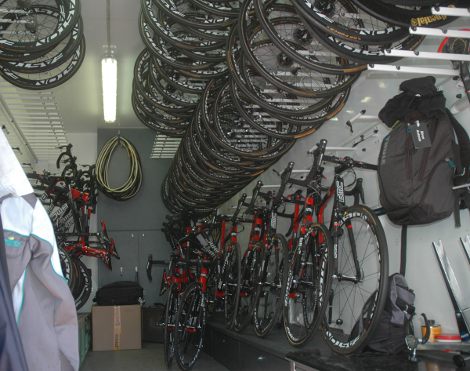 Here’s what the inside of one of the bike trucks looks like. 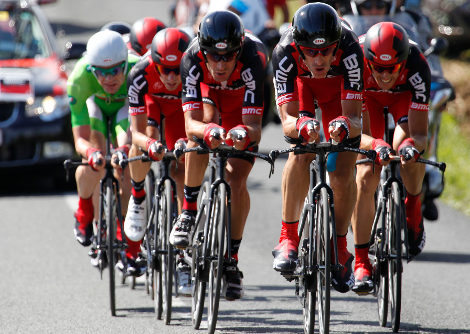 Look for the BMC TT bikes to be back in action on the stage 20 individual TT on July 23.
Zap