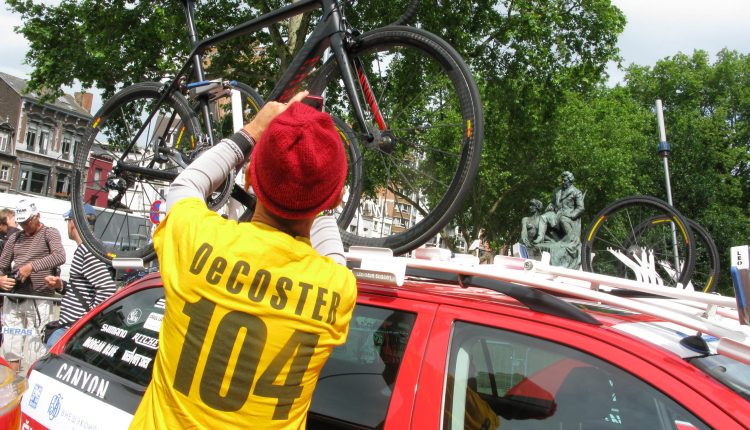 Originally posted from the Tour in 2012.

Welcome to the another series of ramblings from another Tour de France. Coming to you live from Liege, Belgium. Nothing against Belgium, but it seems that just as you start to get into the groove about being in Northern Europe, someone has to come around and compare the 2012 start with the 2009 start that took place in Monte Carlo. Wow, what a weekend that was! While Monaco provided the most scintillating backdrop for the Tour, I still cringe at the nightmarish memories of what it took to get there – remember when – but that was then and this now…the 2012 Tour de France! 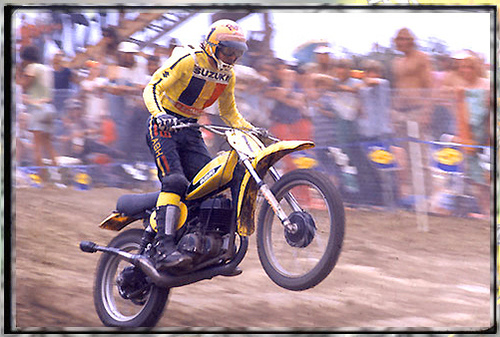 I know, I know, it’s all about bicycles, we’re only “allowed” to talk about bicycles…still we’re in Belgium so if you could just excuse me this one time to pay homage to one of Belgium’s favorite sons – five-time World MX Champion Roger DeCoster. Like Bobke said, there are few things that Belgium ALWAYS brings to mind: Eddy Merckx, beer & frites, and for me, Roger DeCoster. To that list I’d also add Belgian Waffles. 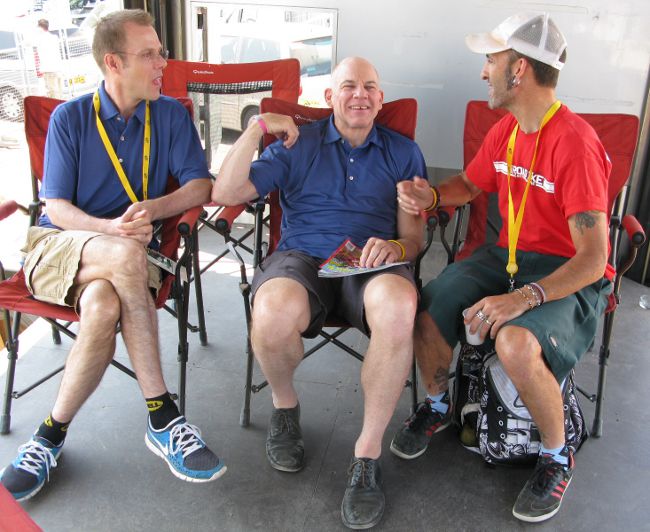 Hanging with Bobke (c) and Todd Gogulski (l) at Stage 3 at the 2011 Tour. Unfortunately, “GoGo” didn’t get the call-up this year and he was replaced by another long ago American racer, Scott Moninger.

SCOTT WHO YOU ASK? 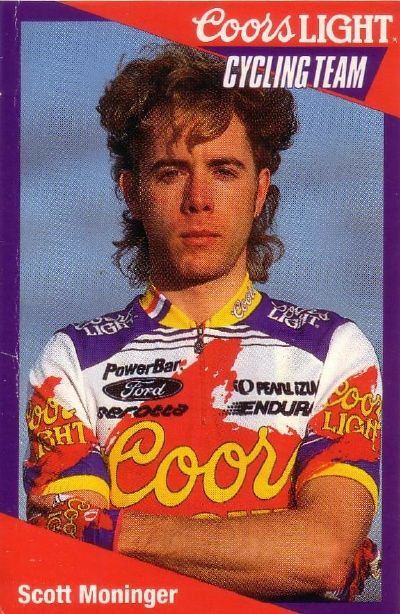 In fact, here’s a shot of Scott from back in his early days as part of the powerhouse Coors Light team that was also home to 7-Eleven alumni Davis Phinney and Ron Kiefel. 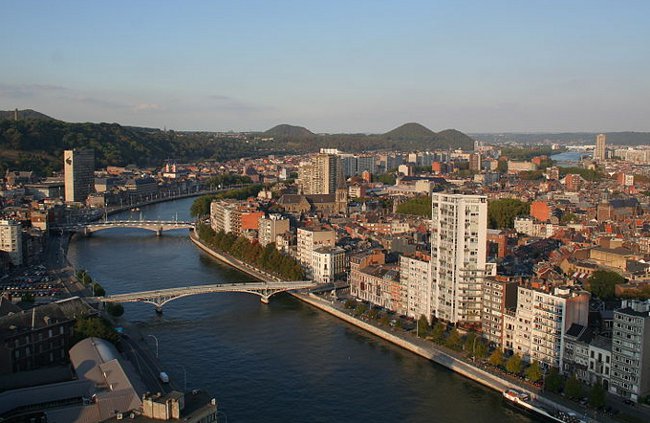 The big city of Liege is playing host to the 2012 Tour de France and I gotta say…it’s not like home in Pasadena!

NIC GOT LEFT BEHIND THIS YEAR 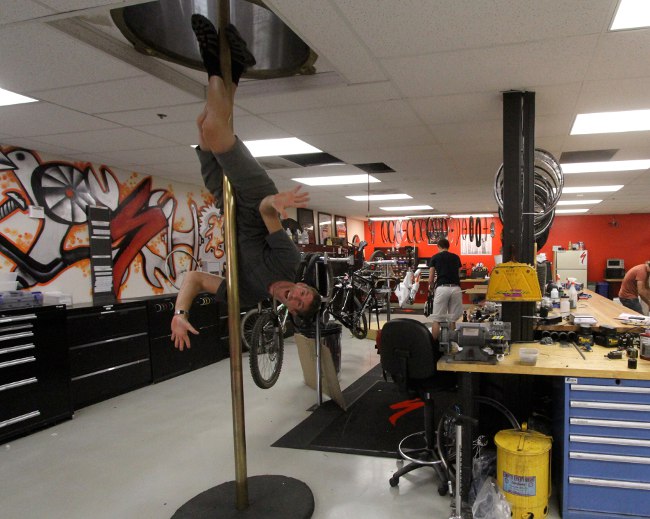 As hard as a worker as Nic Sims was, he was known for having a fun side as well – we’ll miss you this year Nic.

For the last few years one of my “travel companions” at the Tour de France was Nic Sims. Nic worked for Specialized, most recently as the Director of Global Communications. Nic’s stints at the Tour would always involve delivering new product to the teams, managing press launches and answering hundreds of questions as the front man for the most aggressive brand at the race. Well, after 22 years with the “Big S” Nic has moved on to work for Alpinestars where he now attends everything from the Sea Otter to Formula One and MotoGP races.

A few days ago as I was packing for the trip to Belgium, it dawned on me, “wow, no Nic this year.” So I decided to call him up to get some insight that I never thought to ask him before since I always assumed that, like me, he had nowhere else to go in life but the bike industry.

RBA: I know the Tour is pretty much a year-round deal for Specialized, but when does the work for the Tour actually begin in Morgan Hill?
Nic: I’d say right after the Spring Classics is when it really starts ramping up. If we were going to be releasing a new bike at the race than I had to be sure to get my production order for team bikes well beforehand to make sure everyone got what they needed. Last year when we introduced the new Tarmac, each team got two bikes for their best riders, but then HTC came back and said they wanted an additional bike which we didn’t have. Well, we did have one spare, but it was (Specialized Director of Advanced R&D) Chris D’Aluisio’s personal test bike. Next thing you know he was stripping down his bike to make it happen and he handed it over.

Tour de France Factoid: Specialized will supply each of their teams with 3000 water bottles just for the three week race.

RBA: What’s the most challenging part about the Tour gig?
Nic: Probably just getting everything sorted on the ground during the first week. In some towns the teams can be spread apart at different hotels that are miles apart.

RBA: What’s the most challenging part about the Tour gig?
Nic: Probably just getting everything sorted on the ground during the first week. In some towns the teams can be spread apart at different hotels that are miles apart. Honestly, once it gets going you really don’t think about. Last year I was in Switzerland the week before the Tour for the Tarmac SL4 launch, came home for three days then left for the Tour…there’s just so much to do, you just have to keep up. I have to say, it will be strange to be at home watching the race this year and it’s not just the not being there part that’s strange, it’s getting to actually watch the race. That’s the one thing you hardly ever get to do when you’re working the Tour. 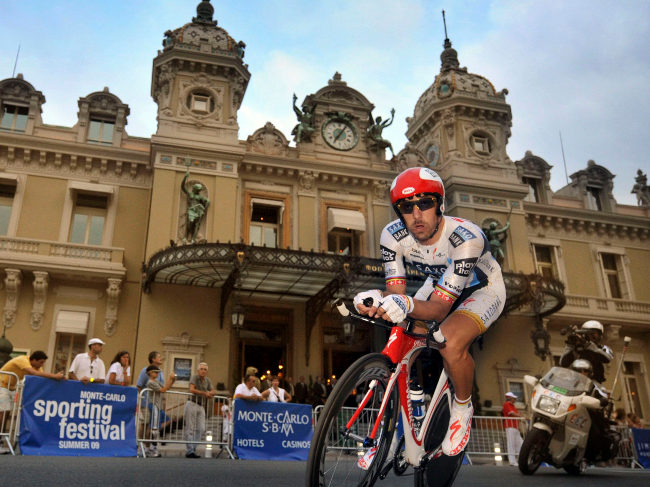 Fabian Cancellara took the (then) new Shiv out for it’s first big win at the 2009 Tour prologue. Photo: Bettini

RBA: After the seven years and countless hours at the Tour, was there one race, one stage, or one moment that you think back on most kindly?
Nic: That’s hard, but I’d have to say the ’09 prologue in Monte Carlo was really amazing for a lot of reasons. Probably the biggest is that we had just rolled out the new Shiv and Cancellara won the race that day. Earlier in the morning  we had spoken to Bjarne Ris and he said Fabian was going to win and when we asked how he knew he said that as they did a course recon Fabian had passed the team car on the fast descent. Also, just knowing that we were walking, driving and riding on some of the same roads used in the Formula One race just made everything that more special… 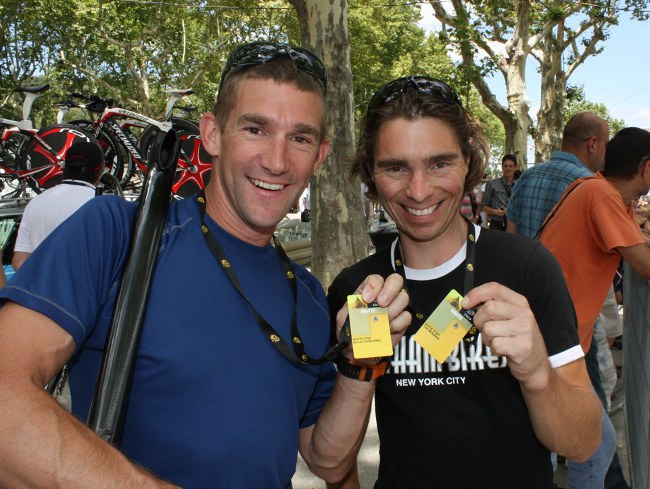 Oh yeah, there was also the time that Chris D’Aluisio (R) and I tried to drive to the course and as we passed the cops we were using Tom Boonen and Sylvain Chavanel’s I.D. cards to get past the security check points. It worked for a few cops who didn’t know any better, but we finally came up to one who knew about the riders and he knew I wasn’t Tom Boonen! 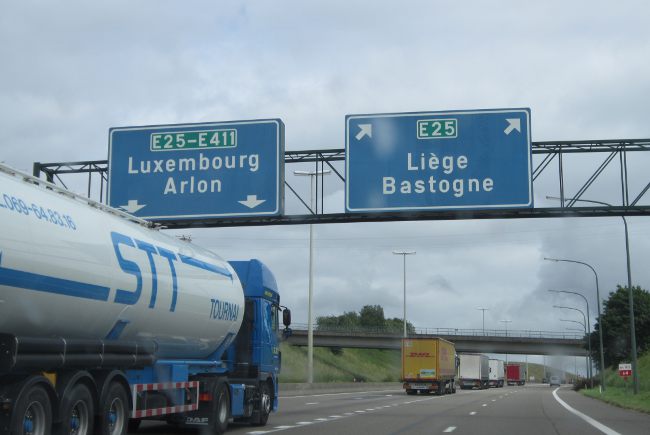 First things first, once again my Tour mate this year is RBA’s Euro correspondent Tim Maloney. I’ve known Tim since back in the day when we met in a hotel elevator in Milano when he was shucking product for Wheelsmith. Few people know the sport as well as Tim, so once again RBA’s own version of Laurel & Hardy will be bringing you as much as we can in Tour tech, trivia and race coverage. We landed in Paris and started our drive north past some famous places.

As with every Tour de France, the first days of each race is spent scurrying about between all the various team hotels trying to catch riders and new bikes as they get prepped for the challenge to come.  And too, as with every Tour we’ll definitely be trying to track down Bobke for a hard to find Mexican (“Amerique latine en bouche”) dinner – maybe this place – and then on Friday we’ll be attending a big launch for Look who are rumored to be rolling out their latest version of the 695 race bike.

So sit tight and in the next few days we’ll be bringing you as much as we can possibly stuff  into our Internet tubes. 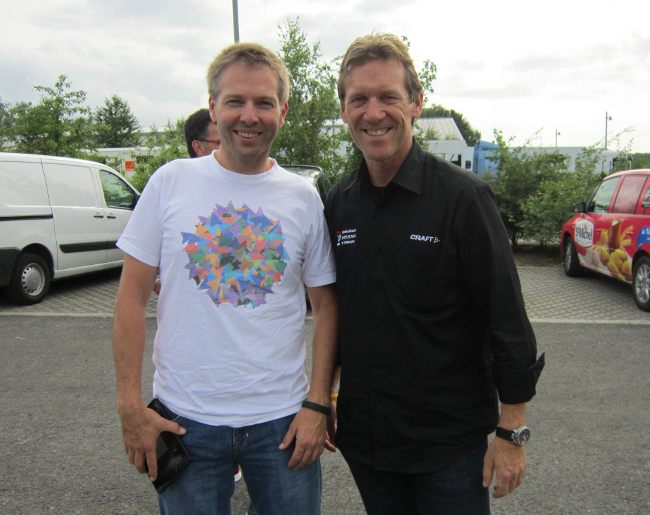 Just after we got to the press center to get our media credentials and we ran into Oakley’s Steve Blick and RadioShack Nissan team director Dirk Demol. Blick said he still had 100 riders to get glasses to by Saturday’s prologue. With Johan Bruyneel staying home this year, Dirk has his hands full this time around. 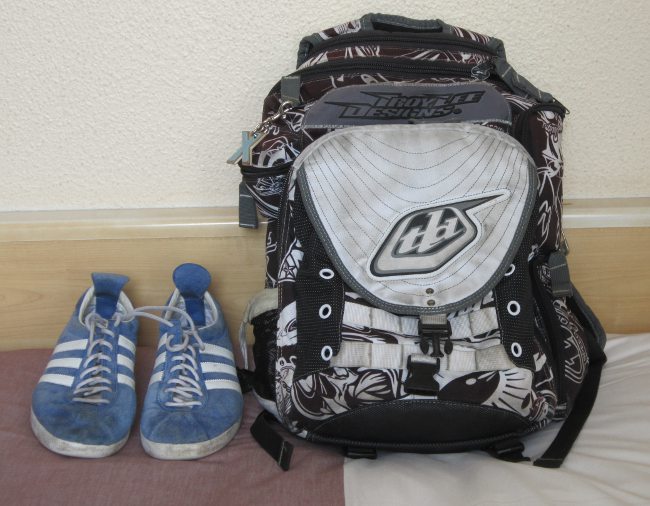 I need to take a moment to say thanks to two product sponsors who have helped make the last three years of Tour coverage possible: Adidas and Troy Lee Designs. I’ve walked miles upon miles in the sweet suede Gazelles with the sturdy TLD pack on my back. 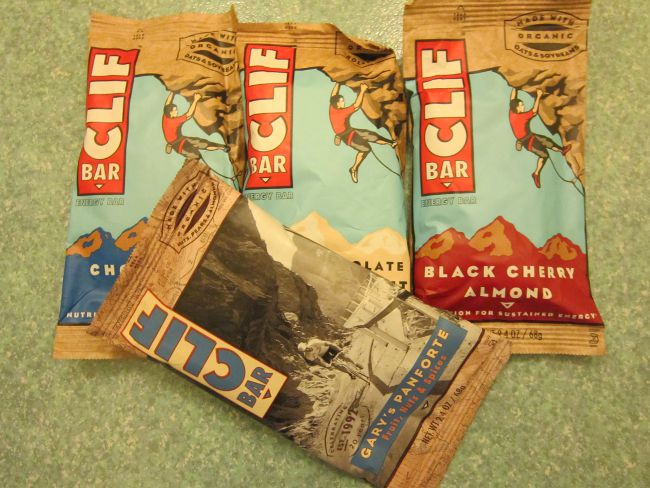 No trip to Europe is complete without a stash of Clif Bars…including the newest flavor coming out of the oven, “Gary’s Panforte” which is named after company founder and hardcore cyclist Gary Erickson and celebrates the company’s 20th anniversary.