A WEATHERED EVOLUTION IN ICELAND – RIDING THE LAUF SEIGLA

Conquering the elements on a new bike from Lauf Cycling 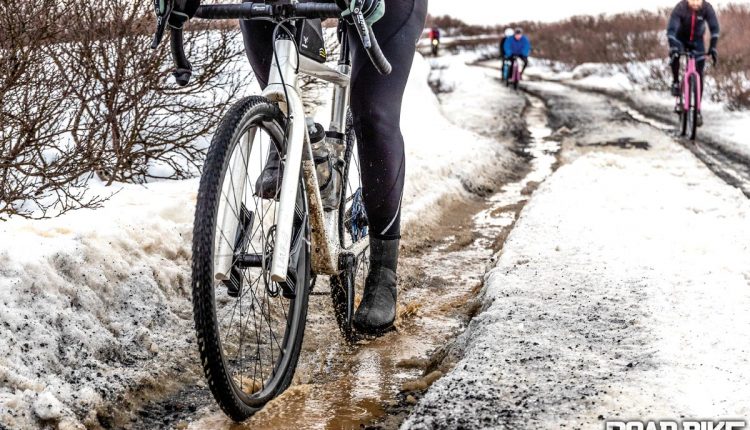 When it comes to incredible places to ride your gravel bike, Iceland has remained at the top of my list since I first discovered it back in 2015. I’ve been lucky enough to make many trips to pedal a bike on the island, and it is without a doubt the perfect environment for a gravel bike. It also happens to be the home of one of the more innovative gravel bike brands. Ever since the introduction of their radical Grit suspension fork in 2016, Lauf bikes have been on my personal must-have list for years.

When I was invited by Lauf to travel to Iceland last March to see something new, they were pretty tight-lipped about what it might be. I was hoping it would be a finalized version of one of three bikes with a tunable rear suspension that they had teased back in late 2019. As it turned out, we were there for something else.

Being that it was late March and most of the country was still deep in snow, I had wondered why they would bring us so early in the year to ride bikes. I prayed it wasn’t for a fat bike! On the day I arrived, it was indeed snowing, and even the normally green coastline was covered in a blanket of white. Always up for an adventure, between the snow and 20–50-mph winds in the forecast across most of the region, I knew this could be an eventful trip. 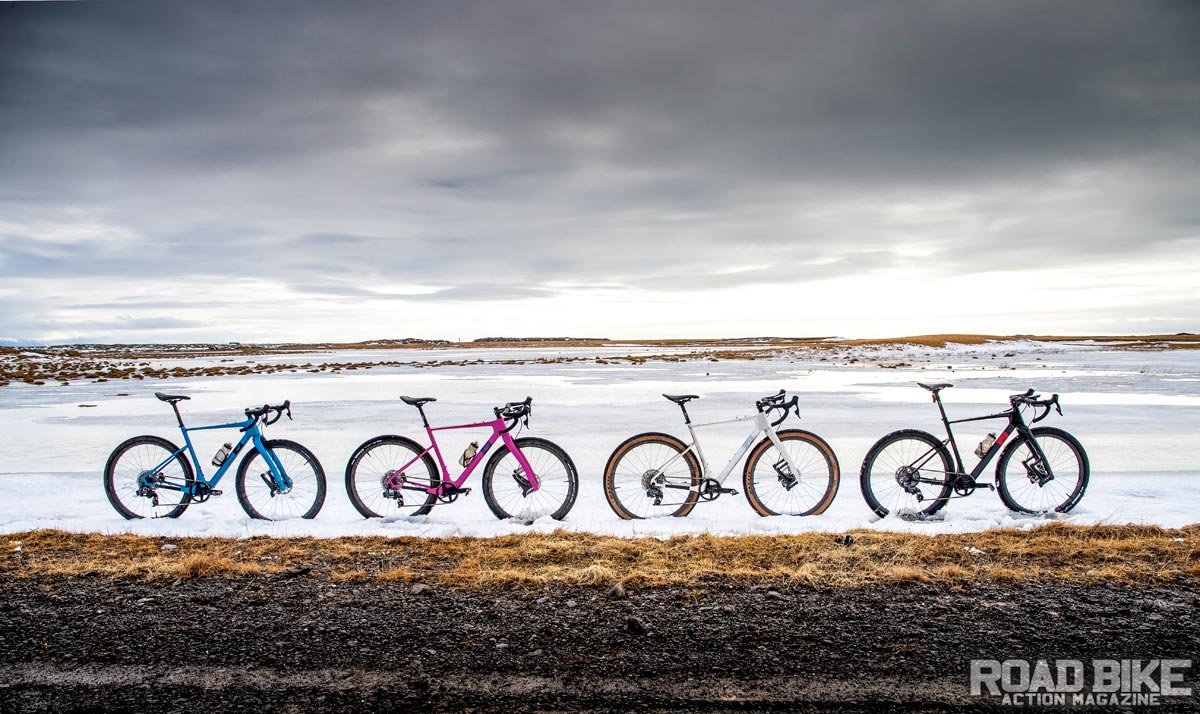 For those not familiar, Lauf was originally a mountain bike suspension company that evolved into the world of gravel with the launch of the Grit suspension fork. In 2017 Lauf became an actual bike brand with the release of the True Grit gravel bike. Their gravel lineup grew the following year with the rigid Anywhere. In 2019 they launched the first Rift event, which challenged riders to race into the highlands of Iceland, which is uninhabitable for most of the year due to its extreme weather and limited resources. Two years ago Lauf made the decision to go consumer-direct, which put a lot of stress on the small team. The original office in downtown Reykjavik was no longer ideal for handling the staffing needs that came with the new business model, so they moved to the new headquarters that would allow for a retail space to sell and display products.

Once brought in from the cold, the real reason for the trip was exposed in the form of a new and improved gravel bike called the Seigla. In Icelandic, “Seigla” means “true grit,” and the new bike is the next evolution of the original gravel bike that really put Lauf on the map. While it wasn’t the full-suspension bike that I had hoped to see, we were told that it was the result of a combination of findings while working on the rear suspension.

It turned out that in the effort to produce room for the rear suspension, Lauf realized that they could improve the existing hardtail with added wheel clearance and compliance, as well as some refinement of the 1x drivetrain. Using the proven geometry from the True Grit with the new refinements and alterations, Lauf was able to quickly pivot their focus and produce a gravel bike that surpasses the original version without compromising their core motto—to “stay ahead comfortably.”

It is pretty simple, Lauf has made small alterations and improvements that result in significant upgrades. Probably the most dramatic is that the Seigla is able to fit a 700x57mm (29×2.25-inch) tire. Somehow this was accomplished without lengthening the rear end and maintaining a 42.5cm chainstay length. But how? To get the needed room, the 1x-specific Seigla now has a solid carbon drivetrain-side chainstay that is slim but tall. The bottom bracket is also a BSA 73, which is normally a mountain bike standard. So between the 5mm-wider BB shell and slim chainstay design, larger tires are able to squeeze between the frame and chainring.

Along with the help of SRAM, Lauf was able to help develop a 1x crankset that maintained the narrower Q-factor that road cranksets provide. Now in its third generation, the Grit fork has finally moved away from the 15mm axle and uses the industry standard of 12mm. The fork crown has broader shoulders, but has also been refined and the legs slightly lengthened to accommodate the larger tire. Even though it aesthetically looks bulkier, the 30mm-travel fork retains the same 850 gram weight. 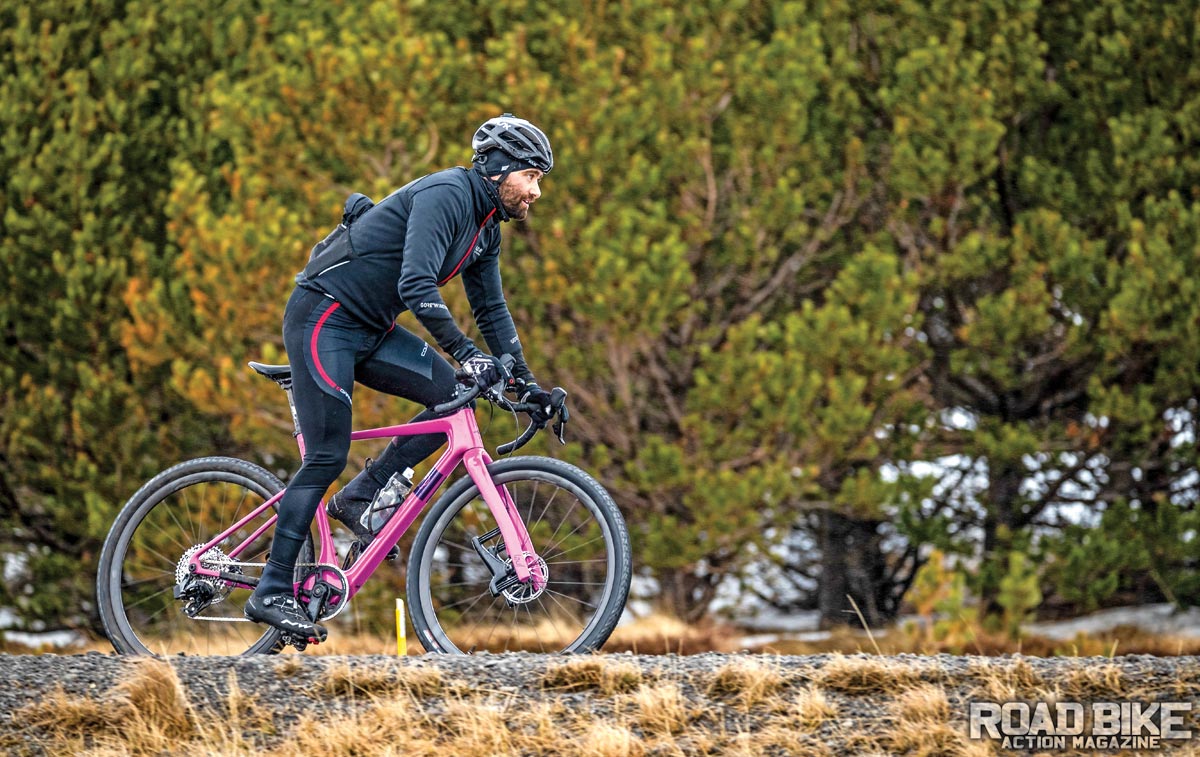 The next and probably most striking change is the use of dropped seatstays. Lauf felt that the True Grit’s rear end didn’t match what the Grit fork offered for compliance, so starting with the dropped seatstays, the Seigla now offers an almost perfect balance front to rear. But, that’s not all there is to it.

To start, the slim rear portion of the top tube transforms the junction to the seat tube into a virtual pivot. To maximize the effect, the use of a standard seat clamp for the 27.2mm seatpost means that the virtual pivot is not overbuilt and negated with an internal-wedge retention system. Next, the horizontally wide but vertically thin seatstays allow flex up and down while resisting lateral flex. The dropped seatstays channel the forces so that it slightly flexes the seat tube, resulting in movement of the saddle rearward and down, as well as a small amount of rear-axle travel. The last compliance feature is also the most common—an exposed seatpost. Compared to the True Grit and Anywhere, there’s between 14–20mm of exposed post depending on the
frame size.

While it looked good on paper, the real test always comes from behind the handlebars. Since the weather was worse than expected and we had a few flight delays, Lauf ended up shuttling us out to a pretty elaborate fishing compound that was off the beaten path and the perfect location to host our gravel rides. The truth is, almost anywhere outside of the main city of Reykjavik is a stellar place to set off for a gravel adventure.

Just as the weather report promised, for the duration of our trip we encountered days of horizontal rain and winds strong enough to keep the pace in the single digits. There were moments when the wind was a helping hand on our backs, but with such waterlogged roads, neither the assistance nor the benefits were ever maximized. The roads were so wet and physically demanding all the time that it made it hard to truly focus on the bike and its new improvements.

To be honest, everything felt different. Was it the new supple rear-end compliance or the sponge-like road that was enhancing the compliance? The one true feature that was made clear from the wet and muddy conditions was the massive amount of added tire clearance that proved golden. It didn’t matter if we had 40mm tires or the absolutely massive 2.25-inch tires, there was still room for the mud and debris to pass. For those who went with big rubber, the increased surface area of the larger tire also offered an advantage in the soft conditions. When we were riding through fresh snow, everyone wished they had chosen 45mm tires or more.

Looking back on the conditions, they were not what most of us have to ride on a daily basis. Sure, we might have one or two rides that entail muddy conditions, but overall, the Iceland experience was not an accurate representation of our daily riding. And that’s exactly what makes the Seigla so good. The bike is designed to tackle far more extreme conditions than most of us will ever need.

Do I ever need to run mountain bike-sized tires on our dried-out SoCal fire roads? No, but the fact that we can without compromise is in my view a win for sheer versatility. Can you still run a 32mm all-road tire? Sure, but you can also run a 45mm tire and have plenty of room for when the weather turns moments before a big event, and you know it’s going to be a muddy mess.

Is the Seigla the perfect gravel bike? No, but it is ahead of the curve. Most other brands are only able to accommodate this sort of clearance and compliance on a 650b wheel system. Our biggest disappointment is that Lauf overlooked the demand for a dropper seatpost. They are so focused on speed with compliance that they almost completely dismissed the crowd that loves to get low. Sure, you can use the wireless AXS seatpost that will set you back nearly $700, but for a bike that is so capable, in our mind, this is a big miss.

So while we can’t give you an honest assessment of the Seigla yet, you know that as soon as we get it home and on familiar terrain, we will. The first impressions of the bike are solid, and the versatility will reach from podium racer to casual adventure seeker. If we have learned anything from our trips to Iceland, it’s that the Lauf folks are a different breed of humans. To live and ride in these beautiful but challenging conditions daily gives you a very unique outlook on what a bike and human body can endure. This is perfectly represented by Lauf and the new Seigla.