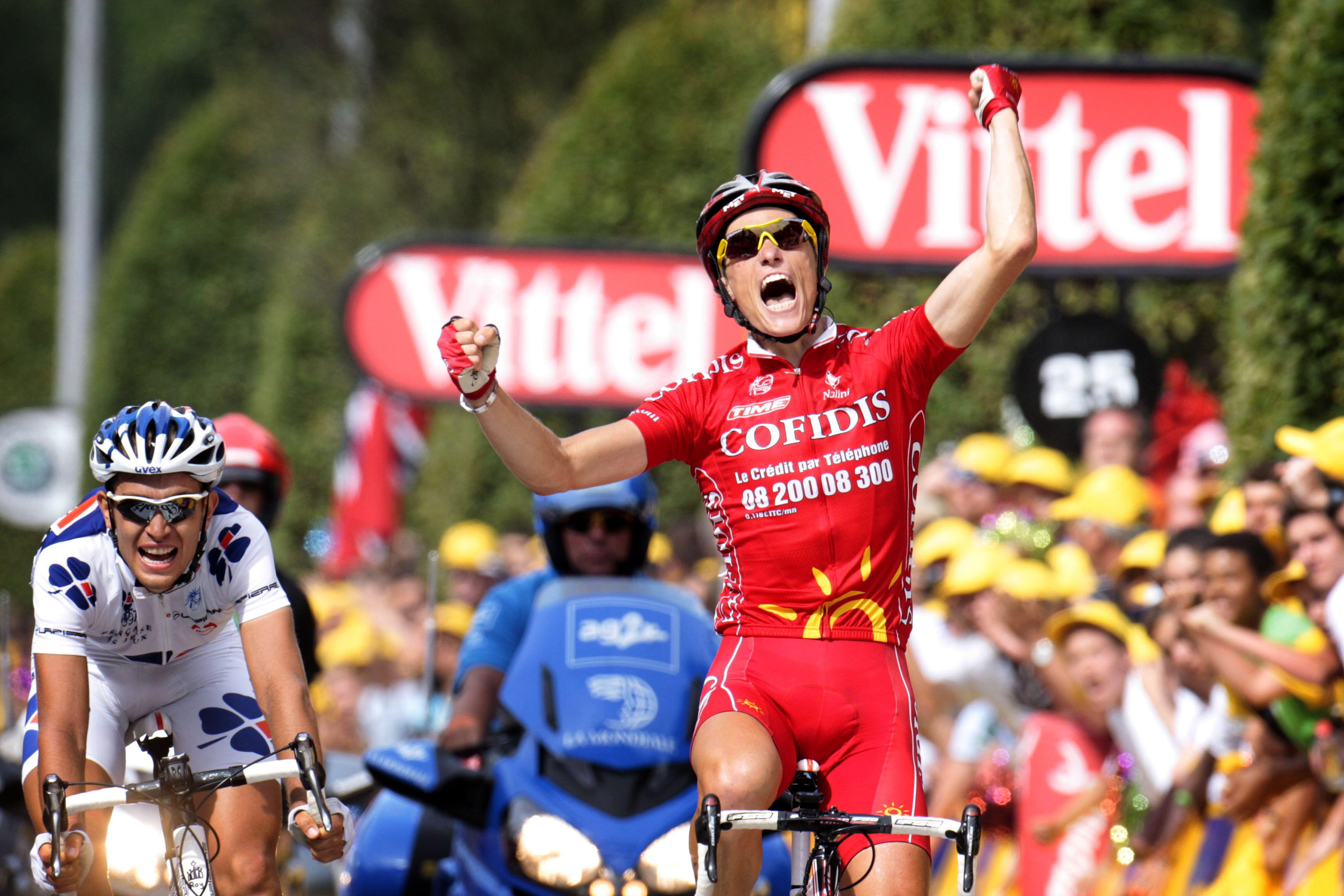 After a Tour De France spent on the attack more than any other rider, Cofidis rider Sylvain Chavanel finally won his Tour stage in Montluon. The 29 year old French TT champ explained post-stage ‘This victory confirms that my early season, which was very good, is still happening. This is my seventh win this year, but still, I couldn’t have believed that I could win this morning. Last night, I had major back pain and had to see the team osteopath to for treatment. So today, I’m the happiest man at the Tour.’ 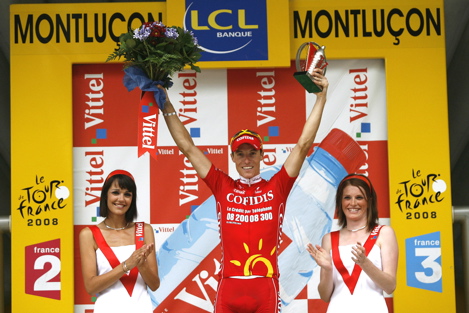 photo Roberto Bettini
Chavanel elaborated on how he built his win, saying ‘During the first hour of racing, the pace was really fast. I was always up front, in the first 20, but I didn’t make the first break. But I was really frustrated, so I kept going and then counter-attacked, which worked. At the end, I had a little doubt, and didn’t panic and I rode the sprint exactly the way I wanted to. I didn’t want sprint like yesterday between Barredo and Burghardt. I wanted to lead the sprint out and it worked.’ 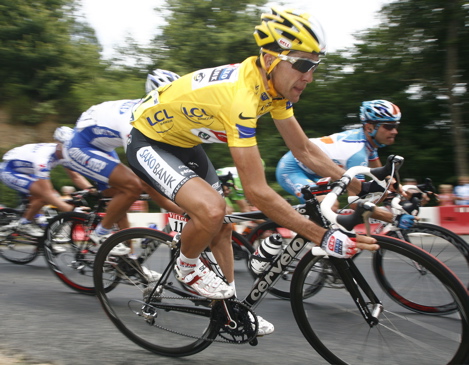 
Maillot Jaune Carlos Sastre explained ‘In the time trial the most important thing is to know the course so, tomorrow morning I’ll go and see it. It will also be very important for me to have the time checks of Fabian [Cancellara] who is the best time trialist in the world which should be an advantage. And I can ride behind Menchov and Evans time checks, so I will count on my strength and my confidence.’A positive Sastre said ‘I feel relaxed. The team has helped me immensely. I have waited for this day for my entire life. So the only difference with other time trials is that I now have the Maillot Jaune; otherwise, my legs will hurt and I’ll suffer from start to finish.’ Speaking of his chief rival Cadel Evans, Sastre said ‘Yesterday Cadel patted me on the shoulder and congratulated me, but I usually don’t talk with him, especially when the race is all out racing as it has been these past two days.’How It HappenedAt 1:29pm, the 165.5km Stage 19th stage from Roanne to Montlucon kicked off at 1.29pm with 149 starters on a warm, humid and overcast say. Damiano Cunego (LAM) did not start due to injuries sustained on Stage 18. There were two climbs on the day, Cat. 3 La Croix-du-Sud after 17.5km and the Cat. 3 cote de la Croix-Rouge after 42km. There were two intermediate sprints, in Chantelle after 102.5km and Commentry after 143km. There were multiple attacks from the start but nothing stuck on the uphill start until the 16km mark, when Schumacher (GST), Martinez (EUS), Ballan (LAM) and Fedrigo (BTL) gained a maximum gap of 35′, but Quickstep, Liquigas and Caisse d’Epargne began the chase. By the second climb of the Cat. 3 cote de la Croix-Rouge, after 42km the advantage was 1’05’, with a blistering average speed for hour one of 45.8km/hr and eventually the break came back at the feed zone after 69km mark. 10km later, Chavanel (COF) made his move and then Roy (FDJ) bridged across to make it two riders out front. The two Frenchmen were allowed to gain a big advantage on the peloton and after 94km the lead was 4’00’. The breaks maximum lead was 5’05’ after 125km, when all four riders from Barloworld moved ahead of the CSC team that had been leading the peloton and increased the tempo. 10km later in Lapeyrouse, Milram, Quickstep and Liquigas also joined in the chase and then after 158km, Chavanel overtook Lilian Jegou as the rider to have spent more kilometers on the attack than any other rider in the 2008 Tour. 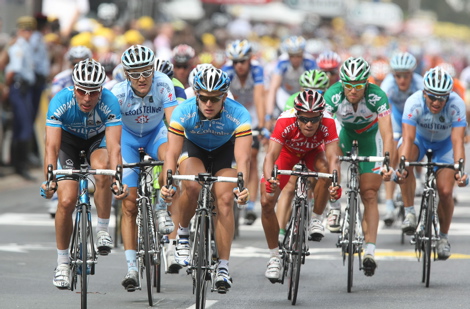 The chase in the peloton by the sprinters teams increased in the last 35km but had left the chase too late. With 15km to go, the gap was 2’55’ and it was now inevitable Chavanel and Roy would stay away. Chavanel took the sprint from Roy, with Ciolek winning the bunch sprint for 3rd, while Maillot Jaune Carlos Sastre finished in the middle of the peloton at 1’13’. Agritubel’s Former Maillot Maillot Jaune Romain Feillu, Juan Antonio Flecha (Rabobank), Fabian Wegmann (Gerolsteiner) all finished outside the time limit and were eliminated. For Complete Tour De France Results, Click HereSaturday 26 JulyStage 20: Crilly?Saint-Amand-Montrond, Individual Time Trial-53kmThe penultimate stage of the 95th edition of the Tour de France is a rolling 53km individual time trial over the country of the Allier and Cher regions. Cadel Evans will be looking to take back his time on Maillot Jaune Carlos Sastre and seize the Tour lead on this long time-test, while the final podium places will be decided in Saint-Amand-Montrond.
Tim Maloney-European Editor