July is here. It’s the one month when the hearts and minds of cycling fans the world over all turn to France to enjoy another three-week-long trek filled with more drama and excitement than any superhero movie from Marvel Comics. This year’s 109th edition of the Tour de France has 2068 miles on tap to challenge the sport’s best teams, riders and bikes.

What to expect? Already this year we’ve seen two-time champion Tadej Pogacar do everything he can to announce his intentions to dominate for a third time.

This year’s race will once again kick off in another out-of-France start on July 1st in Copenhagen, and race organizer Thierry Gouvenou has planned a “race with a bit of everything” to challenge the young Slovenian. Best of all is the news that it appears fans will be fully permitted to line the roads to cheer on the peloton for the first time
since 2019.

Our best advice? Sit tight and stay as close to as big a screen as you can find to enjoy the elbow-to-elbow camaraderie and conflict that undoubtedly will arise between the 189 riders. It’s the Tour de France after all—the greatest sporting event that the world has ever known!

WHAT ABOUT THE ROUTE?

The 2022 Tour de France embarks from Denmark, pushes into Switzerland and Belgium, visits Dunkirk and Lourdes, and features five mountain slogs. Cycling fans can look forward to a pulsating penultimate day with a time trial over a 25-mile course. Other highlights will be a stage on the cobbled roads of Roubaix on the border of France and Belgium and massed ranks of spectators on the classic climb of the Alpe d’Huez on Bastille Day.

The 2022 route looks favorable to the all-rounders who can master the time trial, such as reigning two-time champion Tadej Pogacar and his compatriot, Olympic time-trial champion Primoz Roglic. While there are two time-trial stages, totaling over 30 miles in length, the riders will also be put to the test over five massive mountain stages. Pogacar, however, denied he would be the favorite for a third yellow jersey. 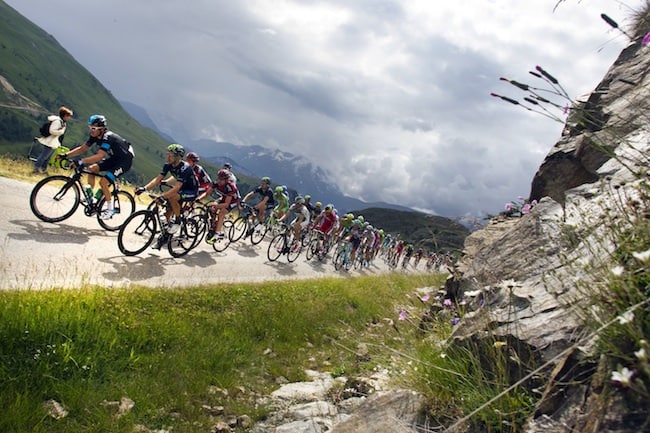 “I’ve won two so I’m more confident, but every year is different so it’s back to zero,” the young UAE Emirates rider said. “There are lots of tricky stages with either wind or cobbles or little climbs where you can make a mistake, and the Alps look tough. I’d say the Alpe d’Huez would be the big one.”

The race also takes in the pilgrimage town of Lourdes and the picturesque medieval city of Carcassonne in southwest France. The race begins with a short eight-mile time trial around Copenhagen, passing by churches, palaces and landmarks, like the water-bound bronze statue of the Little Mermaid.

But, the key challenges in Denmark will be the runs along the fjords and the crossing of an 11-mile bridge between two islands. The 2021 runner-up Jonas Vingegaard is Danish, and there will be several others, like former world champion Mads Pedersen and Kasper Asgreen at the start in Copenhagen.

From the looks of the parcours, only the most complete rider stands a chance at winning. While the route avoids the entirety of France’s western coast, it is at least balanced on a sporting level. “The word that best captures how to describe the 2022 route is that it’s complete,” said course designer Thierry Gouvenou. “You’ll need to be at ease with wind, too, because of this bridge over the sea in Denmark and also on the stage to Dunkirk,” he said of the final day in Denmark and the first French one on Stage 4.

“The cobblestones might also have their say on how things go in the race for the yellow jersey. There are 11 miles of them. That’s complicated for a lot of people,” he added. “But, anyone who wins will need to be a complete rider because there are five finishes at
high altitude, and one of them is at 7800 feet. You have the entire palate of what is possible to provide on a Tour de France.”

After completing eight laps in the French capital on the final day, a deserving champion will pull on the coveted yellow jersey on the Champs-Elysees, at which point the countdown for the 110th running will begin immediately!

THE TEAM TO LEAD: JUMBO-VISMA IS STACKED

With consecutive second-place finishes at the Tour in the last two years, Jumbo-Visma has already announced a powerful core of potential riders for this year’s race. Six members of the eight-man squad have been announced. Primoz Roglic, who finished less than a minute behind Tadej Pogacar in 2020 after being overtaken by his fellow Slovenian in a time trial on the penultimate day, and Dane Jonas Vingegaard, a distant second to Pogacar last year, are joint leaders. They are backed by a powerful quartet: Belgian Wout van Aert, former cyclocross world champion and winner of four 1-day classics last season; Dutchman Steven Kruijswijk; U.S. climber Sepp Kuss; and newly signed Australian Rohan Dennis, a former world time-trial champion. Jumbo said they will announce the other two riders ahead of the race.

“First, we have to get through the hectic opening week without any injuries,” said sport director Merijn Zeeman, still thinking of last year when Roglic suffered a crash on Stage 3 that later forced him out of the race.

“In 2021, we had the best Tour in our history with four stage wins and second place overall.

“We will do everything to be at our best in July, but we know the competition is strong. Tadej Pogacar is again the favorite, and we are one of the challengers. The Tour is the biggest race in the world and the hardest to win, but we find it a fabulous challenge.”

The route for the return of the women’s Tour de France is set for eight stages, embarking from the Eiffel Tower on July 24th. The comeback women’s edition of cycling’s most iconic race starts on the day the 109th edition of the men’s Tour ends. After a route that winds through northern France, the race culminates on the Planche des Belles Filles climb in the Vosges mountains.

Danish cyclist Cecilie Uttrup Ludwig said she was over the moon to be taking part. “I want it to be July now so we can get started,” she said jumping up and down. “The Tour de France is a reference, and when you say you are a cyclist, people ask about that. Now, I can say I race the Tour de France,” she said.

Race director Marion Rousse, a former French cycling champion and now a TV commentator, told AFP it would be a varied course that would maintain suspense over the eight days.

“It is coherent in a sporting sense, and we wanted to start from Paris,” she said of the 639-mile run. “With only eight stages, we couldn’t go down to the Alps or the Pyrenees; the transfers would be too long. The stages are obviously shorter for the women than for the men’s races. The men can go 140 miles. For the women, the longest race on our roster is 109 miles, and we even needed special dispensation for that,” she said. “But, it’s a course I love.”

Christian Prudhomme, the president of the Tour de France organizers, was equally enthusiastic: “The fact it sets off from Paris the day the men’s race ends gives the new race a boost, because it sets the media up to follow it more easily. It also means that with the Tour de France starting on July 1st and the women’s race ending on the 31st, there will be cycling on television every day of July.”

BUT OF COURSE – THE COURSE

Check out all 21 stage previews here. 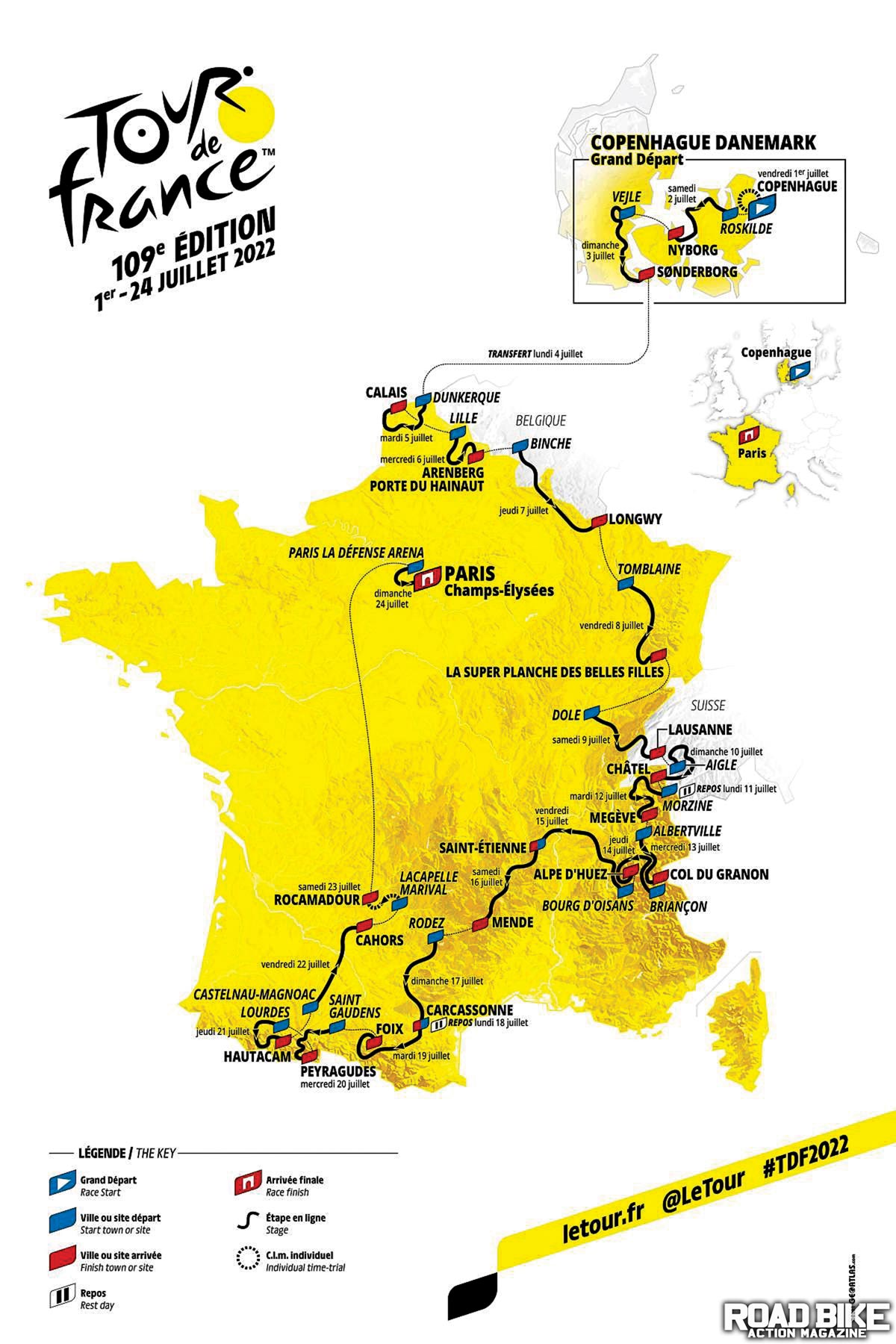