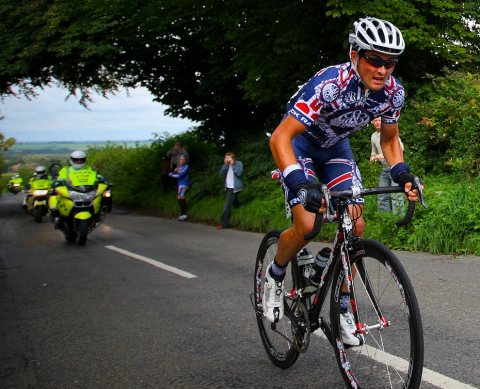 Rock Racing Moves Two Into Top 12 At Tour Of Britain

Rock Racing moved two riders into the top 12 at the Tour of Britain Monday despite suffering two flat tires and having nearly the entire team get caught up in a crash.

Spaniard Oscar Sevilla is 10th, seven seconds off the lead, and American Fred Rodriguez is 12th, eight seconds behind. In all, 84 riders ? including five of six from Rock Racing ? are within 10 seconds of overall leader Alessandro Petacchi (LPR Brakes).

The flurry of action on Stage 2 happened within the last six miles of the 90-mile (145 km) race from Milton Keynes to Newbury. Sevilla was the unfortunate victim of the majority of unluckiness. The Spaniard first suffered a flat tire on the final categorized climb of the day, but quickly received help from teammate Victor Hugo Pe¤a, who gave up his bicycle.

But after chasing back and shepherding teammate Rahsaan Bahati into position for the final sprint, Sevilla punctured again as a massive pile-up occurred inside the final two miles, splitting the field.

‘Everything was fine the entire race until we got to the last couple miles,’ Sevilla said. ‘Then it all fell apart.’
Because Sevilla’s mishap occurred in the last 1.8 miles (3 km), officials credited him ? and the majority of the peloton who were stopped as a result of a rider hitting a median ? with the same time as the group they were riding in when the crash occurred.

Up ahead, Matthew Goss (CSC-Saxon Bank) won the stage over a pair of Team Garmin-Chipotle presented by H30 riders: New Zealand national champion Julian Dean and Australian Chris Sutton. Rodriguez was the only Rock Racing rider to make the 20-strong lead group that finished about 15 seconds ahead of the pack (that was later given the same finishing time).

Earlier in the race, Sevilla showed his strength as part of a five-man break that escaped on the first King of the Mountain climb. He won the sprint to take maximum mountain points before his group was caught.
Pe¤a’s unselfish act to help Sevilla ended up costing him valuable spots in the overall classification. After getting a new bicycle, the Colombian was inadvertently led off course and eventually came in more than 13 minutes after the leaders. But by finishing within the time cut, he will start Tuesday’s third stage of the eight-day race.

The BISSELL Pro Cycling (BPC) came to the Tour of Missouri to make an impact and to leave their final mark on a successful 2008 season. That impact was felt early and often today with Tom Zirbel ending the day in 5th overall on GC.

Ted King, currently ranked number two on the NRC, was the first to attack ? but the break was swiftly brought back. Sixteen miles in, Tom ‘Thor’ Zirbel put in a vicious time trial effort and quickly turned a fifteen second gap into a minute with his only break-away companion, BMC’s Martin Kohler. Numerous attempts were made to reel the two in, including a one-two punch from Team Columbia’s ultra-fast man Mark Cavendish and his teammate, recent Tour of Ireland winner Marco Pinotti.

Not able to bring them back, Zirbel and Kohler worked together to increase their lead to a minute and twenty. Kelly Benefits’ Johnny Sundt was the only rider to make the gamble pay off, eventually bridging across to the now waiting Zirbel pair. The three worked together for the next 40 miles, driving the break through intermittent downpours.

The move forced the big players to burn energy early in the tour. With the entire Team Columbia squad on the front, Zirbel was slowly brought back ? he and his break-a-way mates absorbed with 20 miles to go.
The final three finishing circuits were being controlled by Team Columbia with Garmin-Chipotle on last wheel and BPC swapping turns to keep Zirbel protected on GC. Across the line first for Team BISSELL was Richard England just outside of top ten in the eleven spot, a stupendous effort considering his current battle with a virus that has his lymphatic and immune systems working overtime.