The sprinters battle with a proven winner 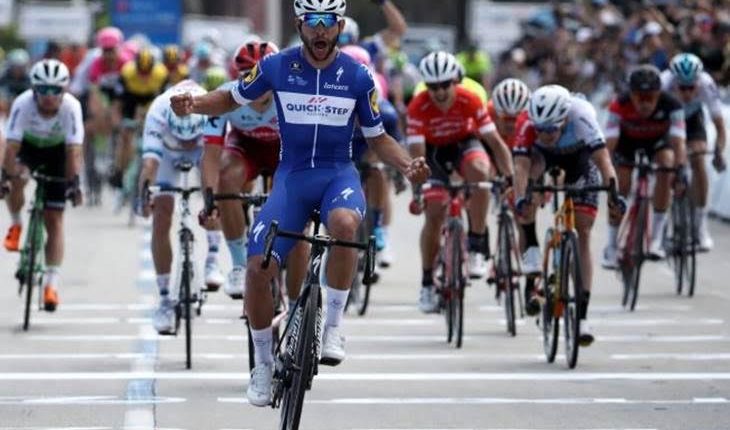 Fernando Gaviria claimed the opening stage of the 2018 Tour of California on Sunday, winning the 30th stage of his career and picking up the 30th stage win of the season for his
Quick-Step team.

The 24-year old became the first Colombian in four years to win a stage at the biggest race in North America which began in Long Beach and ends on Saturday in Sacramento. Gaviria won a sprint to the finish, edging Australia’s Caleb Ewan (Mitchelton-Scott) and reigning world champion Peter Sagan (Bora-Hansgrohe) in the 134.5km (83 mile) opener.

“The feeling during the race was really good. Really good legs,” said Gaviria. “We’re happy to win the stage.”

He picked up a 10 second bonus for winning the stage and leads the overall classification by four seconds ahead of Ewan, who secured a six-second bonus.

“Yeah, it was a pretty straightforward race today, just on circuits,” said Ewan. “It was a pretty hectic finish because it’s the first stage, so there’s a lot up for grabs.”

In the overall standings, Tanner Putt (UnitedHealthcare), was in third, four seconds back. Sagan was bumped down to fourth overall at six seconds back. Sagan holds the record for Tour of California stage wins with 16. Two-time Belarus national champion Andrei Krasilnikau is fifth overall.

Krasilnikau led late, but the peloton was able to reel him in and the field was reset for the final push to the finish. The Quick-Step team then went to work, setting the stage for Gaviria’s
final fireworks despite a strong challenge from Ewan.  Defending champion George Bennett decided to skip the California event, opting instead for the Giro d’Italia which runs at the same time.
Monday’s 157km second stage goes from Ventura to Gibraltar Road, taking the riders through the race’s most demanding climb.