The Argon 18 Sum Pro melds the benefits of two worlds 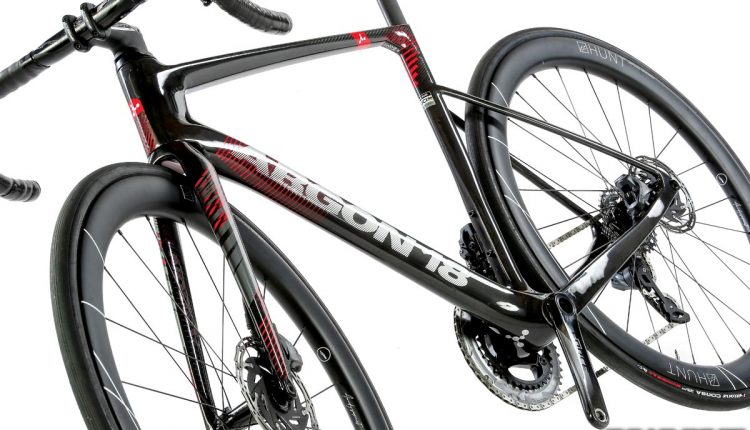 Argon 18’s history is steeped in performance-driven design cues and aerodynamic innovations since 1989.  The Montreal-based brand has achieved WorldTour-level success on the road and more recently on the track under the muscular Midwestern muscle of Ashton Lambie during his world-record-setting 4K individual pursuit attempt. This year Argon 18 announced it would be consolidating its road bike catalog following the likes of Specialized and Scott by ceasing production of its aero-focused Nitrogen and lightweight-optimized Gallium frames. In place of the two models, Argon revealed the Sum series that combines the best characteristics of each. 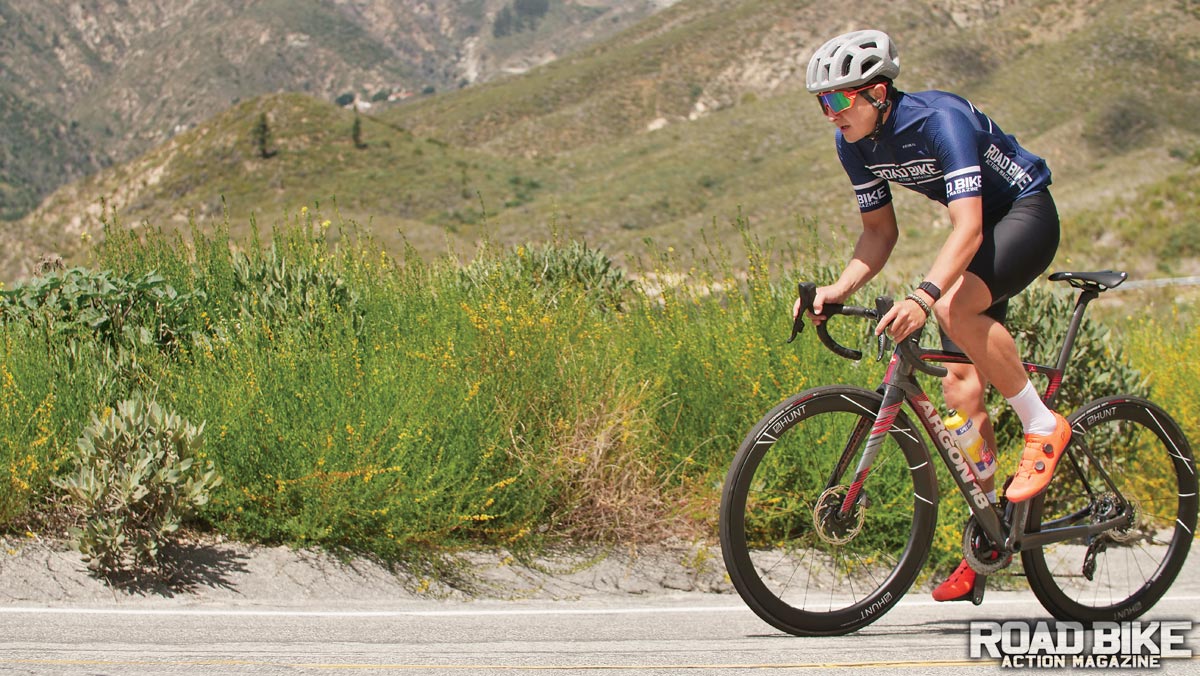 Much like how Specialized blended the Venge and Tarmac to create their Tarmac SL7, the Sum Pro is the sum total of Argon 18’s latest aero and weight-focused designs. Aero shaping can be seen with the hourglass-shaped head tube, airfoil inspirations on the downtube, seat tube and seatpost, as well as the Kamm tail-shaped fork that is intended to divert air away from the downtube. We like the engineered clearance for up to 32mm of rubber.

Argon 18 claims a medium Sum Pro frame weighs 850 grams with the standard Sum frame weighing 40 grams more. For comparison, a similar-sized Specialized S-Works Tarmac SL7 is 800 grams, with the standard SL7 at 920 grams. The Sum and Sum Pro share the same geometry but the Sum Pro uses a refined carbon layup to save weight. It’s worth noting our SRAM Force AXS Sum Pro runs for $8900, while the Sum build is a more reasonable $6200.

Geometry-wise, our size-medium Sum Pro mixes a steep 72.7-degree head tube angle with a mid-length 99cm wheelbase. A 54cm stack and 39.7cm reach create a balanced approach to the frame.

Argon 18 offers two build options of the Sum Pro, in addition to a frameset, which starts at $4200. Ours was the highest-end build offered and featured a SRAM Force AXS drivetrain. Anyone looking to save $2300 can consider the Rival AXS model. The 48/35 chainrings are paired with a 10-30 cassette for a fairly aggressive gear range. Most stock SRAM builds from major manufacturers use smaller 46/33 chainrings that are equivalent to compact Shimano chainrings, we like the added speed that can be achieved from the taller gears Argon 18 chose to spec.

FSA’s ARC stem cleanly hides the hydraulic line and allows for easy fit adjustments and, when the time comes, upgrades over the alloy FSA Energy compact handlebar. Argon 18 does intend to spec carbon bars on the Sum Pro build in the future, so be sure to double-check what your build is spec’d with.

“With a focus on blending aero and lightweight performance details to create a modern road bike, the Sum Pro boasts the type of refined ride characteristics that any performance-oriented rider would need.”

UK-based Hunt Bike Wheels’ Limitless Aero Disc keeps the Sum Pro rolling. Hunt claims they’re the fastest mid-depth wheels they offer. Rim dimensions include a 48mm depth, a 22.5mm internal width and a 33.5mm external width. They are pre-taped and tubeless-ready, plus they include a set of valves. The wide rim improves airflow around the wider tire options that the industry has embraced. A pair of 25mm Vittoria Corsa 2.0s were installed with a tube but just require sealant to complete a tubeless setup. Once mounted the Vittoria tires measure closer to 28mm. Weighing in at 1711 grams, it’s worth noting the Hunts are on the heavy side, making them one piece of equipment that could be upgraded to save upwards of a pound for the more weight-conscious riders.

With a focus on blending aero and lightweight performance details to create a modern road bike, the Sum Pro boasts the type of refined ride characteristics that any performance-oriented rider would need. On the road, the Sum Pro was quick to input, thanks to its steep head tube angle. Steering is sharp, and at speed, the 99cm wheelbase adds stability and the Hunt wheels improve tire grip with their size-enhancing rim design.

One thing we did notice was how much the wheel and tire combo produced improved compliance on rough roads. We noted being able to pedal over stretches of road we’d typically be bracing for bumps on. Cornering was the highlight of the Sum Pro. The build is ideal for the performance-oriented criterium racer that doesn’t mind risking a high-priced bike in the bunch.

On downhills we found ourselves spinning out around 38 mph rather than 36 mph, though this remained a relatively rare feat. Maintenance-wise, we charged the AXS derailleur batteries once a week with the system performing without compromise. 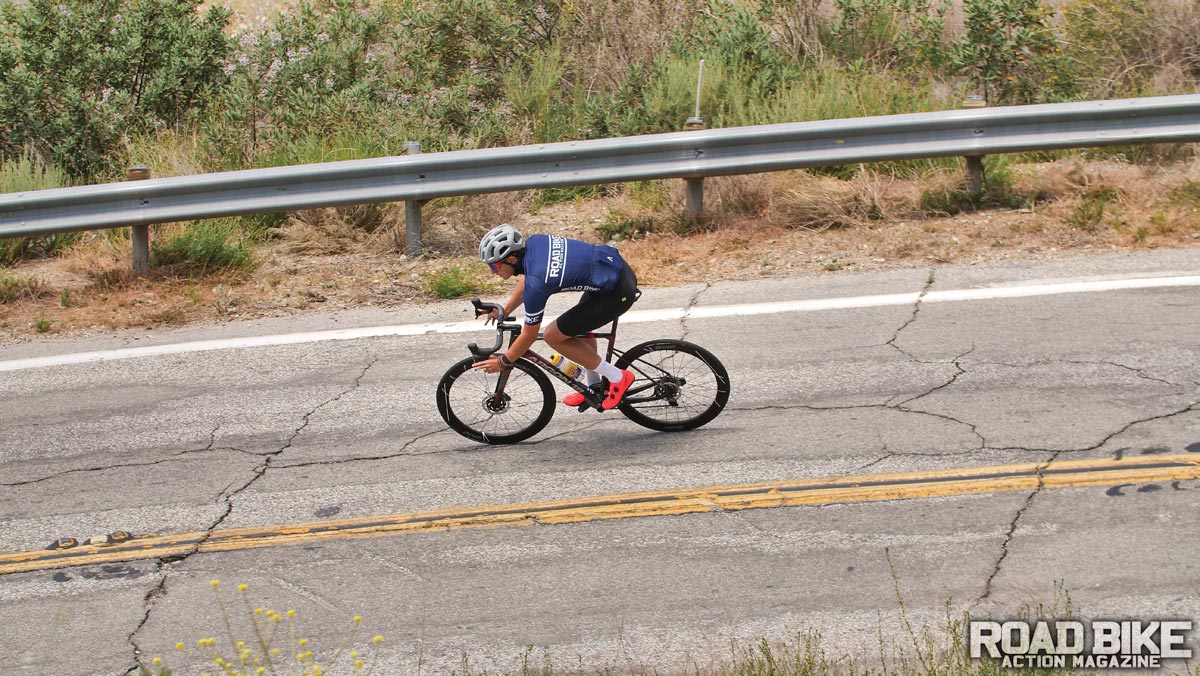 Argon 18 brings a competitive modern road bike to its catalog with the addition of the Sum Pro. Internal routing and wireless shifting give the disruptive colorway of the Sum Pro a smart look. It’s a bike that’s on par with other recent offerings from the big-name brands. The performance-driven design cues have been proven by world-class athletes like Ashton Lambie giving Argon 18 an elevated level of appeal.

The Sum Pro is available in six sizes from 42cm to 62cm. We’d like to see a premium build offered with SRAM Red AXS and a lighter wheelset to highlight the lowest achievable weight the Sum Pro platform could attain. We’d likely recommend the more affordably priced Sum-level builds for the added value without much compromise on ride quality.