You recently won the U23 Road Race National Championships. What went into that effort?

First of all, I went into the race with really good form, as I just finished a big training block for the Tours of Utah and Colorado. Going into the race I knew there would be a split in the field. When and where it was going to happen, I wasn’t sure, but I knew I had to be there to have a chance. Our whole team was active from the start, making sure that no one was up the road in a move without one of us in it.

Halfway through the race is about when the split happened, and because I was at the front most of the day, I was able to jump across and make it into the break. We drove it pretty hard for about 30 kilometers, taking a minute out of the field. With about 30 kilometers to go, a lightning storm caused an hour break in the race and was pretty crazy, because I wasn’t sure how my body was going to react from that long of a pause. I found myself in a great position, because I knew most of the guys were starting to fade and I felt comfortable.

Six kilometers from the finish I made an attack and brought three guys with me, and a kilometer after that I hit it hard once more and dropped all three. From there I went solo to the line and never looked back. A lot of discipline and focus went into that effort, because I had to make sure that I didn’t get ahead of myself and jump too early and get countered, as there was only one optimal time to make my move. There was a lot of tactics and explosive power that came into play that I was able to use to finish off the race.

What forms your athletic background?

From a young age I grew up playing sports, most specifically hockey, which taught me self-discipline, hard work and never slacking off. About the age of 15 or 16 I started riding with my dad and kind of caught the bug. I gave up hockey at age 18 and picked up the bike full-time. I think my deep hockey background has made me tougher and prepared me for how hard racing professionally can be.

What has helped you the most in your cycling career?

Knowing how to find a balance in this sport. I am naturally very hard on myself, which is a real issue and can lead to burning out. The person who has helped me the most in this area is my dad, because he knows me so well and can tell me when to shut it down in training and when to keep going to finish my workout. He understands the sport and the psychology of the sport. Having someone like him to talk to is extremely beneficial, especially when I am not wanting to ride or having a bad day.

What is your favorite workout?

I don’t know if there is a favorite, because they are all hard, and I don’t like most of them. But, if I had to pick one, it would probably be 10–15 minutes at threshold and then sprinting for a minute and then coming back to threshold for another 10 minutes. I’m not sure I can say that it’s fun, but you feel good about yourself once you complete them.

What has the transition of moving to the pro level with Aevolo been like for you?

The transition from going to my first-year U-23 as a Cat. 2 to being a pro a couple of months later with Elevate-KHS was a massive step. It took me a full year to learn everything that is involved in being a pro bike racer, and I found myself out of position and on the ground a lot during my first year. As it is for most young pros, results that season were hard to come by.

The transition to Aevolo has been very smooth. The way Mike Creed runs this program is unlike any other I’ve seen before. He makes this team as pro as possible so that we can do our job, and all the staff makes sure that we are all taken care of on and off the bike. I have only been racing at a high level for three years now, so I don’t have much experience with many teams, but I am extremely confident in this team and have been taken care of above and beyond what my expectations were. 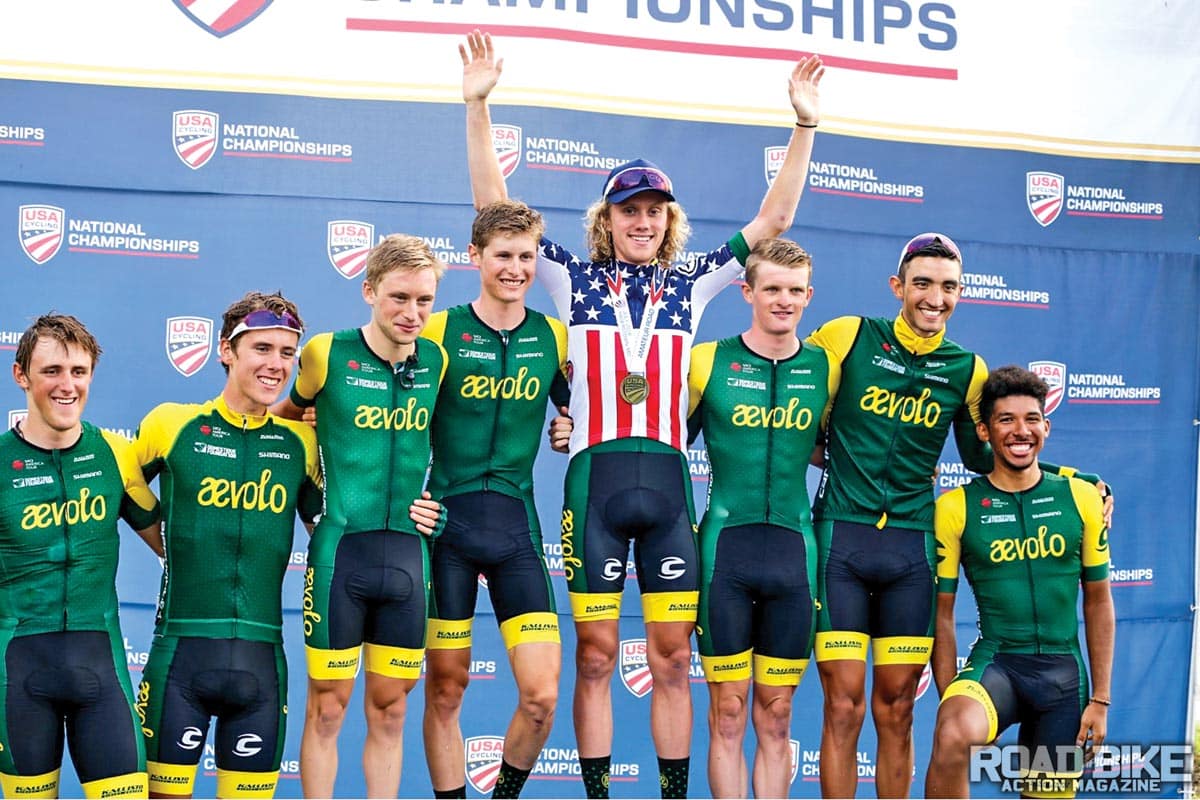 What do you enjoy doing when you’re off the bike?

I really like to cook food. That is one thing that I have loved about this sport is that it makes you learn how to cook for yourself, especially when you’re on the road for months at a time. Learning new recipes and trying out different ways to make the same dish are intriguing.

What tire pressure do you like to run and why?