From Belgian Waffle Ride to the WorldTour 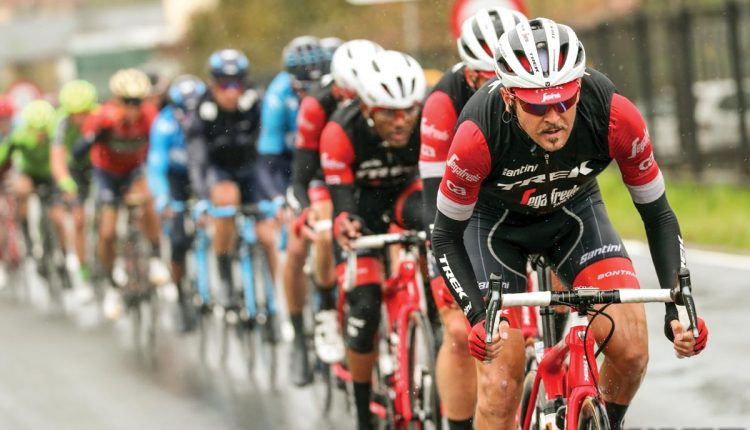 Congrats on taking the win at the Belgian Waffle Ride. The gravel, sand and rock gardens along the course set it apart from typical road racing. What equipment did you rely on?

Trek Factory Racing is taking these adventure races seriously with me, and they spoke with friends who had participated in past editions. I ended up on my Trek Madone Disc road racing bike with a normal handlebar for better grip and tubeless 28s with sealant and 80/85 psi. It was a gamble, as most went wider and lower pressure, but in the end, the course is two-thirds road, and I knew if I could make it through the dirt sections and not get gapped that I would have an advantage on the roads where my WorldTour experience lies. The gearing was the new SRAM Red eTap AXS 12-speed 50/37 front and 10-33 rear.

What steps did you take in order to recover before the Amgen Tour of California less than
a week after BWR?

Ain’t no rest for the weary! I took two days easy to travel home and spin. I headed out for five hours the next day before I met the team in Sacramento. The Belgian Waffle Ride actually served as great prep for one last hit-out before the Amgen Tour of California.

Our readers still have time to sign up for the upcoming Prospect Ride that you have organized since 2017. What should they expect to get themselves into?

The Prospect is an extension of myself and my passion. In light of that, and in conjunction with my career, we are going full gravel in a mountain range that no one has explored! I’m talking packs of wild mustangs and shotgun shells as your only company along the base of the majestic Eastern Sierras. It’s going to be a legendary expedition, and you can sign up for more info as we roll out the new format at www.sierraprospect.com.

Whether it’s from your time with Garmin, BMC or now with Trek, what is your favorite memory of riding in Europe?

Race-wise, it has got to be the 2011 Giro when I was part of Ryder Hesjedal’s win. We were the underdogs and to come out on top was unreal.

Some of our readers may remember the time your father (Dale) and uncle (Wayne) were setting the records in the back of the USA Cycling handbook. How have they supported you in your journey through the sport?

I was never pushed into the sport, but once I found it through the mountain bike, they had a wealth of experience and connections. My dad was always there to coach me in my junior days and was so supportive. My uncle works for Shimano, and it was helpful to get parts for cheap before I had sponsorships, and also to stay with him in SoCal while growing up in Colorado winters.

Your 2018 season was affected by the Epstein-Barr virus. How did it impact your career, and what steps did you take to recover and regain your fitness to continue to race at the WorldTour level?

I had a late diagnosis with EBV. I didn’t realize I had been racing with it until late summer, which was almost too late to salvage my season. For the rest of the year I focused on one-day races, as I could still be strong when fresh, and it was my recovery in stage races that really suffered. Luckily, Trek-Segafredo stayed with me. I took a good off-season and really let my body rest. So far the virus seems to be suppressed. I really learned how this life as a pro can be fleeting and change on a dime. I also don’t stress the small things as much. I just want to be strong and enjoy the racing, because you never know when it’s your last season.