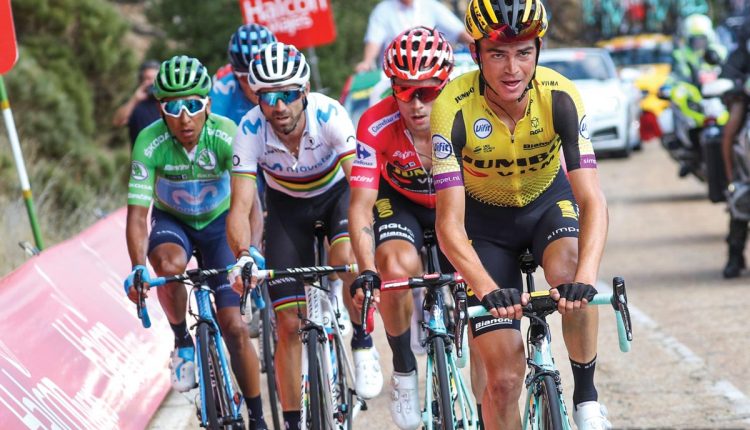 Can you give our readers a bit of background on your cycling career?

I started out in the Durango Devo MTB program. At the time I was just riding for fun, going on adventures and racing most weekends in the summer to stay in shape for ski season. When I started college at the University of Colorado Boulder, I was introduced to a bit of road racing through the collegiate cycling club. From there I started with an amateur team (Intermountain LiveWell) and learned the ropes in a few races in between my mountain bike racing schedule.

The next year I fully focused on the road scene and started the Redlands Classic with Gateway Harley Davidson U25 team. I ended up winning the Oak Glen summit finish, which was my first win on the road. That performance
was enough to get a spot with Rally Cycling for the rest of the season, and that’s when I got my first taste of
international racing.

What was a training tip or exercise that helped you reach the pro ranks?

The biggest factor in improving and eventually making the jump to the WorldTour was improving my consistency in training. Before, I would go for a few rides that would “empty the tank,” and then struggle to reach the same quality in the following training days. Now, I focus more on overall consistency—keeping enough in reserve each day, riding easy between intervals and eating well on the bike—so I can maintain and improve my fitness through a long season.

You rode in support of Primoz Roglic at the Vuelta a Espana and were often one of the last teammates riding for him each stage. What does Jumbo-Visma do to help you compete at such a high level day after day for three weeks?

The team puts a lot of effort into managing nutrition and recovery, especially during a Grand Tour. During races, the team is pretty precise with making sure our nutrition and fueling match (but doesn’t exceed) our energy expenditure after every stage. For a climber like me, I have to make sure I’m adequately fueled every day but not gaining weight during the race (surprisingly easy to do). During the race I also have to pick my moments and save energy when possible so I can be there at crucial moments.

The Vuelta was the third Grand Tour you competed in, and on Stage 15, you took the win. How did all that go down?

Stage 15 was an interesting situation, because I was initially in the breakaway to cover moves in the beginning of the stage and then help my teammate Primoz when the GC group came on the final climb. When the time gap turned out to be enough to try for the stage win, it took a little while to mentally switch from a helper role to having the instincts to go for the win. With that said, I think that role switching helped me in the end, because I wasn’t over-thinking things with the expectation of winning; I was just going with the flow and felt like I had nothing to lose. Once I hit the bottom of the final climb, I had the confidence to just go for it straight away. I felt really strong that day and it was nice to make the most of the opportunity!

Are there any pre-race meal rituals you stick to?

At most races we have a team chef, so pre-race meals are pretty consistent. Usually an omelet with toast and rice porridge. At home I typically make pancakes. During some races it’s nice to explore some different foods. In Italy, for example, it’s pasta for breakfast with a crostata pastry, while racing in Japan it’s ramen noodles. I like to branch out a bit and experience different foods. Especially in the third week of a Grand Tour, I’m putting peanut butter and hot sauce on my eggs and toast, just to keep things interesting.

What’s one race you are hoping to compete in this year?

I’d really like to race either the Tour de France or the Tokyo Olympics.

How can our readers best support professional cycling?

Take advantage of being able to interact with the riders! Ultimately pros are all just bike riders, too, and have plenty of interesting backgrounds and commonalities with the average weekend cyclist. I think when fans see the more personal side of pro cycling, they are more inclined to be genuine fans or support the sponsors who invest in cycling.

After a ride, are there any specific recovery steps you take?

I try to have a carb-heavy lunch after training to fill the glycogen stores. I think it’s even more important to eat sufficiently before and during the ride, then you don’t have to over-compensate as much during meals. Nutrition timing and carbohydrates are really important and should be proportionate to the training you’ve done that day, as well as the coming days.

Is there a correlation between how much sleep you get and ride performance?

A little bit. It’s certainly better to get more sleep, but sometimes you just have to accept that you won’t have ideal sleep quality. For example, in the first week of a Grand Tour or hard training block I will sleep well, but sleep quality goes down from there because of fatigue, stress, etc. If you focus on quality nutrition and other aspects of recovery that are more controllable, then you won’t be as fazed from getting five hours of sleep versus nine.