From pro peloton to just being pro 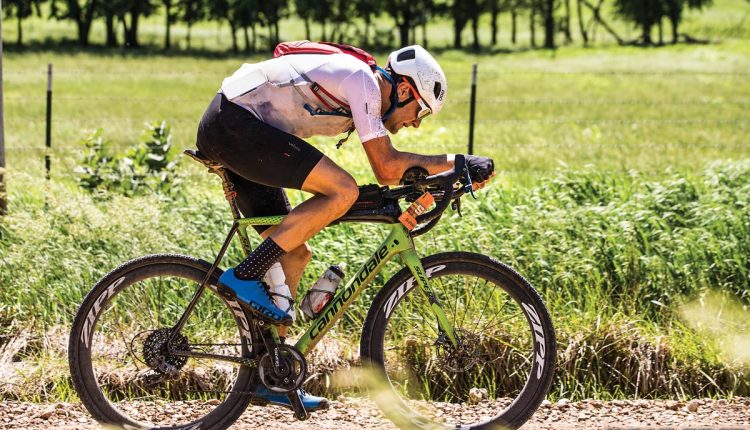 In 2016 you showed up to Dirty Kanza for your first time. Other than winning the event, what stood out in particular once it was all said and done?

The community! I’ve raced pretty much every level of road race there is and plenty of ’cross, mountain and gravel too. The community and atmosphere they’ve grown here in Emporia, Kansas, are one of a kind and something I definitely wanted to be part of again.

Having completed your third edition now with two victories under your belt, what changes have you noticed overall in the three years?

I know the speed of the competition is steadily creeping up. Obviously, with the controversy of aero bars and domestiques entering the conversation, it means that the competition is heating up. In my first year, there were a handful of other former pros amid the 2000-plus-person field. In year two, there were three or four times that number and plenty of elite amateurs. And now, in my third year, the number of not just former but current professionals across all disciplines speaks volumes about the front end of the race.

What do you suppose is the reason for this gravel segment to continue to grow and rise in
the U.S.?

When road races struggle to find sponsorships and the fields are half-empty, meanwhile gravel races and rides sell out in a hot second, I think there’s change brewing. There are a handful of reasons at play. I think first and foremost, gravel races are fun. Unlike road races where you’re in a constant pursuit for points, gravel is a pursuit of a good time. You can be as competitive or as casual as you want to be when riding off-road. I think parents and spouses are much more eager to send their families off-road and away from traffic. The burgeoning growth of high school mountain biking is a great testament to that. Road races suffer from having to foot the enormous bill of renting police, whereas gravel races send the competitors off to play in the woods. It’s a collective set of elements, but it doesn’t show any sign of slowing down, and that’s awesome!

What are some of your go-to workouts to train for a 10-plus-hour race?

I don’t train anymore per se. Given my history of training and racing when I was a pro on the WorldTour, I’m now at a point that I’m aware of what intensities I might need or when I should tone it down and rest, so it’s much more a global perspective on my riding than any sort of training. I love riding, so for my training, I call it “riding with purpose.” I’ve embraced the Grasshopper Adventure Series up here in Northern California, and I raced the Belgian Waffle Ride and other local events to maintain a solid dose of race intensity. I also do weekly group rides and just try to have fun on the bike as opposed to any type of formal training. I do coach a half-dozen athletes, so it’s funny to provide training to them. I think, “Man, I should really be doing that,” but then just prefer riding with friends instead.

Do you see gravel events turning into something that professional teams will get behind one day?

I think European cycling is too rooted in history to see a whole gravel league taking off, but gravel certainly could be part of the future domestically. There are plenty of pros on this side of the pond who show up solo or with one or two teammates, and if they win one of those, it’s far greater press than winning any other formal road race they’ll do all year. It’s really wild to think that this fringe sport is actually taking over the sport.

I think domestic racing is constantly in a state of change. I raced for three years here in America before leaping over to Europe, so I’m not blind to it, nor speaking out of school. My time racing domestically (2006–2008) was the tail end of a booming era for American racing. Teams like Toyota United, HealthNet, Mercury, Prime Alliance and Saturn were huge, and you’d have enormous fields duking it out for real prize money. Now, races are falling off left, right and center, so I think it’s only a matter of time before teams are looking to fill a calendar and they show up at gravel events.

What about your stand on aero bars? Even though you used them, is there a place for them in gravel events?

Ha! This is a bit of a doozy. I’m not going to lead the charge, but I’d be perfectly happy to have them ostracized so strongly that they’re excommunicated. That would level the playing field and keep events safer. Gravel has a cool factor, so it’s funny to add a bit of dorkiness to the mix with aero bars. That said, it’s also completely against the welcoming community of gravel to outright ban things. To say, “No, you can’t do that!” flies in the face of what gravel is and where it came from. Sure, gravel is embraced by the entire industry right now, but it was only a half-dozen years ago that people were cobbling franken-bikes together to make the best tool for the job. As the speed has picked up, the fastest tool is aero. Is banning them really necessary? I think gravel is fluid, too, and we wait and see where things go.

Inside Velo Wrap: Put Away The Paint Gun