Lighting up races for Trek 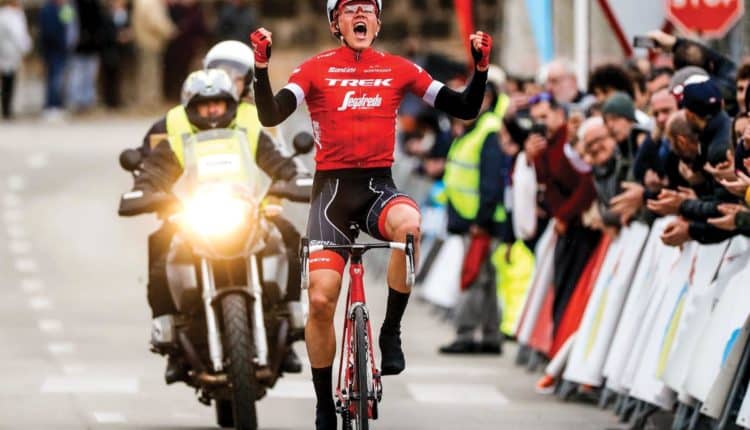 You originally came to America from Latvia in 2014 to race for continental team Hincapie. What motivated you to relocate?

It was for sure tough and not an easy call. At the same time, though, I didn’t have any other offers from European teams. Also, I knew how many riders had gone through Axel Merckx’s program and gone onto the WorldTour, and that team is primarily based in the States. Obviously, the Tour of California is a big race that most of the top European teams come over to do, so I knew that even though I wasn’t going to be racing in Europe, I would have chances to prove myself at these races. I was obviously a little worried coming to America. It’s not quite the heart of cycling, but still moving across the ocean to another part of the world was a big decision to make.

How tough is it to make it to the WorldTour as a rider coming from the continental ranks and not the more traditional route of a U23 rider?

I would say it’s a bit harder, but for me, I think I needed at least a couple more years of development before jumping up into the WorldTour level. I didn’t start racing when I was super young like some other riders, so I think it was good for me to get more experience at the continental level. I think some of the younger guys who go to the WorldTour straight away, it may be a bit much for them, and they don’t quite find themselves because they’re just working for the team. I think some of those riders don’t necessarily learn how to take advantage of opportunities that you may get when you’re racing for a smaller team against bigger teams, and that can hurt them.

You’ve raced for Hincapie, Cannondale and now currently at Trek-Segafredo, which are all American teams. Do they feel different if they’re based in the U.S. or over in Europe?

Well, there’s definitely a big difference from Hincapie to Trek and Cannondale than there is from Cannondale to Trek. I think the biggest difference from Hincapie to the other teams is that we didn’t have that large of a team, so you constantly race with most of the same guys week in and week out. That makes a big difference, because you’re always around those guys and you have fun together and bond more. But on these larger teams, for example, I may race and room with a teammate this week and not see him again until the end of the year. It’s definitely different in that sense, but one thing that Cannondale and Trek are similar in is that they are very international, and that helps a lot where there aren’t big groups of possibly Italians or Spanish riders where they all just hang out together.

Can you give us one of your typical days in between a block of racing that you do, a day of a WorldTour rider?

Obviously, the first couple days after a race you take it easy, you don’t ride much as you may be traveling. But once you get back into it, I will typically wake up and, depending on the motivational level, I’ll do a bit of core work in the morning. After that I’ll have my breakfast, which will typically be my biggest meal so that I can get enough fuel for my ride. After breakfast I’ll listen to some music, catch up on some social media and then head out for a spin. It will be anywhere from three to six hours. I rarely ride less than three hours, and even on my recovery days sometimes, I’ll just take it off rather than an hour’s spin or maybe ride down to the coffee shop. Once I get back, I’ll spend quite a bit of time on the foam roller. After I shower I’ll have a recovery drink, and then depending on the day, I’ll try to hit the local farmers’ market and grab some produce. I typically like to do that, though, on my easy ride days so I can get the fresh produce in the morning. Lately, I’ve been getting into reading in the evenings and following the Olympics. I’ll make dinner in the evenings, and that pretty much wraps it up.

How did the decision come about to move from Cannondale to Trek?

I ended up signing last year during the Vuelta, and the team is a bit more serious about time trialing, which I like. Trek has a bit more staff, and they really look after us well. One of the reasons that helped me not hesitate was that I talked with the directors, and they have been following me, with one of them trying to get me
on the team for a bit. I like that they just want me to keep doing what I’m doing while having fun, and it’s a
relaxed atmosphere.

Being Pro — Jordan Cheyne — Tips From the Pros