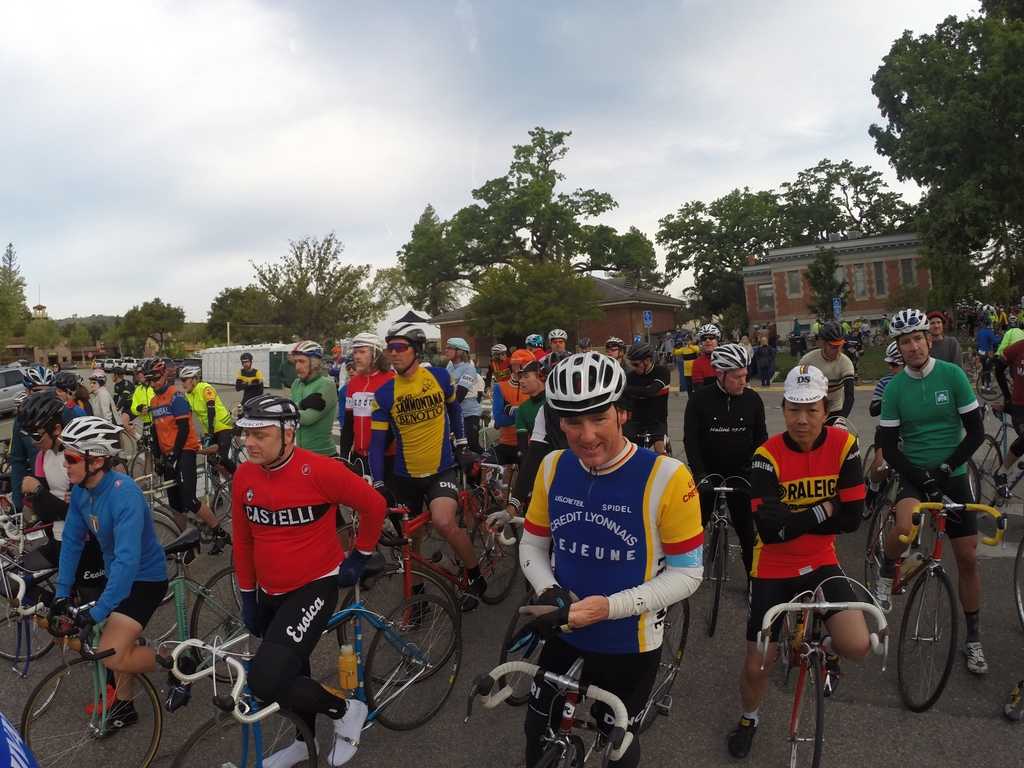 Share
Set in the central California town of Paso Robles, a destination known for its wine, farm-to-table restaurants, and vineyards tucked among beautiful rolling hills, L’Eroica California filled the Downtown City Park. The Eroica events, named for the Italian word for “heroic”, began in 1997 in Gaiole in Chianti, Italy as a way to preserve and celebrate the culture, passion, and heritage of cycling. A movement was born and there are now ten Eroica events, worldwide.

It would be Godfather-like disrespectful to refer to Eroica California as a gran fondo; it’s so much more than the ride on Sunday. The weekend is full of activities that help participants and their families soak up the atmosphere of vintage cycling. Invited on behalf of Road Bike Action, my experience began on Friday night where VIPs, dignitaries, and sponsors gathered at Allegretto Vineyards Resort for food, wine and the official ceremony uniting Paso Robles and Cenicero, Spain as sister cities. The mayors of each town were present as well as the mayor of Gaiole in Chianti, Italy, Paso Robles’ original sister city. Reception attendees, including Andy Hampsten, were fortunate to hear from three different Eroica organizers and hear about the passion that drives the events and unites people from around the world.

Saturday began at Paso Robles’ Downtown City Park where the Concours d’Elegance was the center of attention. After taking a walk around the incredible array of vintage bicycles that would be judged on authenticity (stunners from Bianchi, Colnago, Brian Baylis, and Masi; even a 1947 Maury tandem with a motor assist), I headed to the Park Cinema for a screening of the film Marinoni: The Fire in the Frame. Settling in with some popcorn, the movie rolled and I found myself drawn deeply into the story of renowned frame builder, Giuseppe Marinoni, and his quest to break the hour record for 75-79 year old men.  The beauty of this man’s life journey and the people we get to know through it’s telling brought tears to my eyes. When the lights came up on the nearly packed theater (there were people seated on the stairs), the audience was given the chance to chat with film director Tony Girardin. I was glued to my chair from start to finish and realized it was a movie that anyone, cyclist or not, would appreciate. 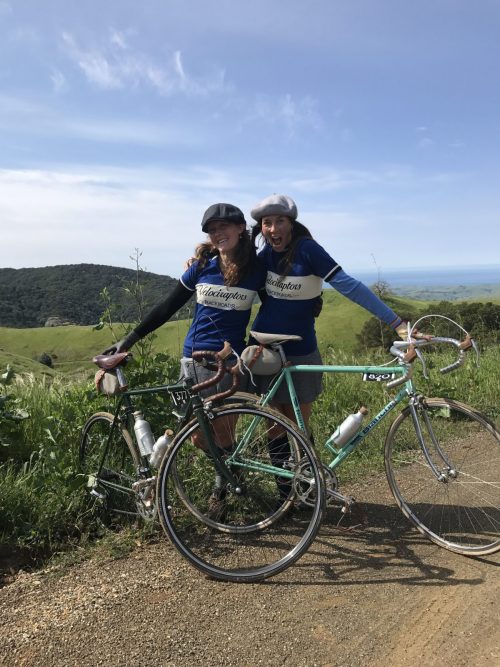 “Cypress Mountain offered the steepest grade of the day, pitching up above 16% and averaging above 11% for the final kilometer, but with fellow “heroic” riders waiting to congratulate you at the top, any pain from the 42/25 easy gear was quickly forgotten.”

Festivities continued throughout the day: mingling among the very young and old, the novice cycling fan to vintage aficionado; nosing through the offerings at the swap meet as a band played in the park’s gazebo; and perusing the cycling art exhibition featuring guest artist Miguel Soro Garcia. As the evening approached, I met some of the women who would be riding Eroica for a Women’s happy hour. As we sipped on wine and shared stories, I found myself wishing more of us knew about Eroica because of its convivial and encouraging atmosphere. Dinner, held in the center of the park, was the final engagement of the day. Bulbs were strung from the tent ceiling casting light on our Tuscan meal that was prepared under the guidance of Michelin star chef Vincenzo Guarino. To close the evening, cycling memorabilia including a Bianchi Eroica frameset, was auctioned off to benefit Hospice of SLO County. With bellies full, our happy crew retired to our house to double check our own steeds for the early morning departure. 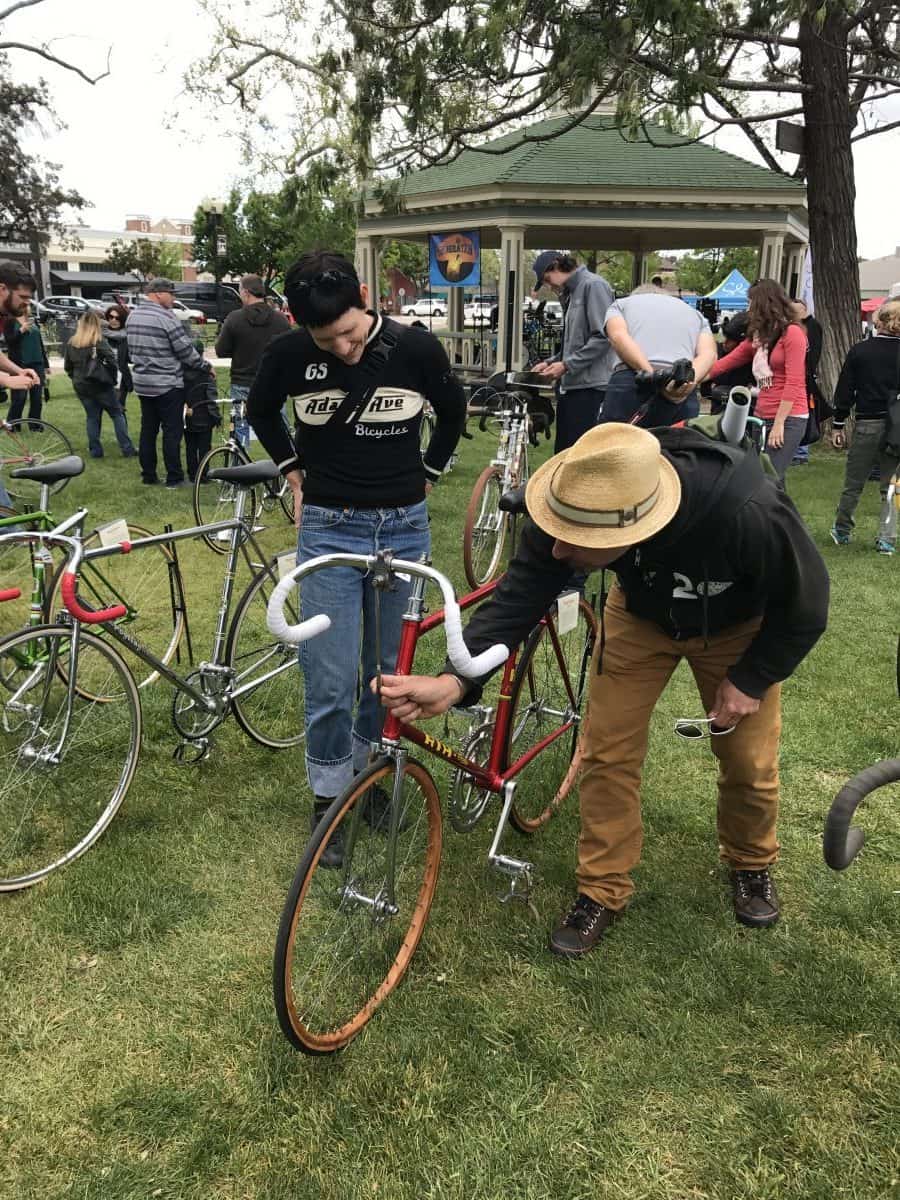 Sunday arrived with clear, cool, blue skies and I was immediately thankful for the replica wool jersey I had borrowed from a friend. After getting our passbooks stamped at the start we rolled from town in a friendly peloton of riders all aboard bikes made before 1987. My bike was on loan from the event director, Wes Hatakeyama, and having never used down-tube shifters, toe clip pedals with straps, or gearing and braking options of the era, I was a bit nervous about the day ahead. It didn’t take long for my worries to dissolve amid the rolling vineyard hills and meandering country roads. Not only was the look of the peloton different due to all the vintage equipment and attire, but the feel of the event is not like any other I’ve attended. Rest stops were staged at stunning locations: the white barn of Halter Ranch with it’s gorgeous covered bridge, a family farm at Linn’s Fruit Binn on the scenic Santa Rosa Creek Road outside Cambria, the Cayucos Pier in a quintessential California beach town, and refuges atop the dirt climbs of Cypress Mountain and Santa Rita Road where riders were overjoyed to see smiling volunteers and the panoramic views of the lush hills and Pacific Ocean.
Of course, there was more to the stops than the quaint settings. Many were relieved to find mechanical support, while the food and camaraderie had our group lingering at our picnic tables far longer than we would otherwise. It began with warm, hearty gnocchi vegetable stew; moved on to gourmet mac ‘n’ cheese with steak, black bean & corn wraps; and was topped off with chocolate covered strawberries and charcuterie plates that had me wondering if I had been transported to a bar in Italy.
While the aid stations may have fueled the day, the incredible route and the people we encountered throughout the day fueled our souls. The 86-mile “Coastal Route” offered endless breathtaking views, picturesque tree covered roads, a mixture of smooth pavement and gravel, and climbs that were equally challenging and rewarding. Cypress Mountain offered the steepest grade of the day, pitching up above 16% and averaging above 11% for the final kilometer, but with fellow “heroic” riders waiting to congratulate you at the top, any pain from the 42/25 easy gear was quickly forgotten.
Returning to the heart of Paso Robles for the finish was a mixture of emotion as I didn’t want the experience to end. Sure, there was a bit of relief that my bike and body had arrived in one piece, but the day had been so fulfilling that I was hesitant to let the seeming chaos of modern age reclaim its place in my life. From the first few minutes of the ride right up to receiving the final stamp, Eroica had allowed us to journey to another time where the intricacies of the equipment and shared accomplishment of every mile allowed an escape to a slower pace of existence where you could stay present in the moment and soak it all in.