Being There: Bike PressCamp 2014, Day One 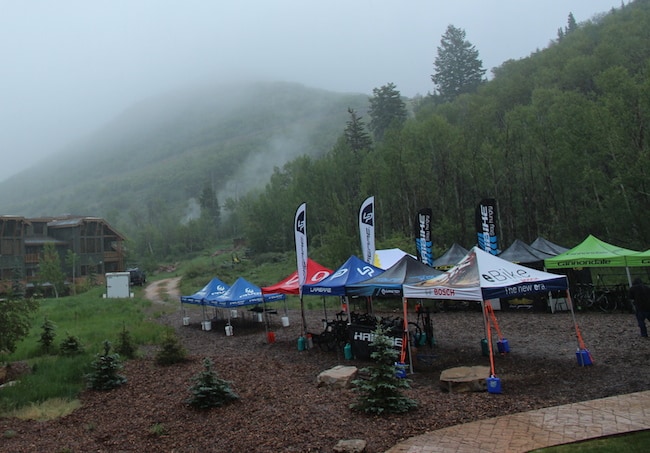 Share
One of the highlights of Bike PressCamp is the ability for attendees to test-ride a variety of bikes from various brands’ demo fleets. This is the calm before the storm, quite literally, from Day One at Bike PressCamp 2014.

Now in its 6th year running, Lifeboat Events’ Bike PressCamp is bigger than ever with nearly 30 cycling brands converging in Park City, Utah, to show off their latest products coming to bike shops soon. An exclusive gathering that’s only open to select members of the media, Bike PressCamp is one of RBA‘s favorite events of the year, as it gives us a chance to get sneak peaks at new bikes, components and accessories long before the ‘official’ trade show season kicks off with the Interbike and Eurobike shows in the Fall. To top it off, the city of Park City is a tremendous host to Bike PressCamp, largely due to its extensive network of mountain bike and gravel trails (around 400 miles total), and its incredible network of scenic and challenging roads to suit all road cyclists’ needs.

And in all the years we’ve been coming to PressCamp, we’ve never been greeted with anything but sunny, warm weather and clear skies. Well, there’s a first time for everything, and this year’s first day of PressCamp saw the skies open up and a sudden snowstorm swept the area. Still, the event trudged on, so here’s a look at some of the highlights seen at Day One of Bike PressCamp 2014. 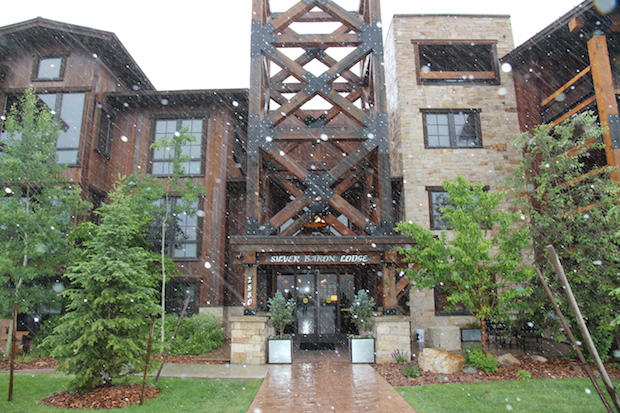 Since 2012, the Silver Baron Lodge at Deer Valley Resort has played host to Bike PressCamp.


This is the third year that Bike PressCamp has called the Silver Baron Lodge at Deer Valley Resort home. In the wintertime, Deer Valley is home to some of the best skiing and snowboarding conditions in the nation. And when summer rolls around and the snow melts, the area’s expansive network of mountain bike trails awakes, and it’s truly a incredible place to ride bikes.

This year was Bike PressCamp’s first ever to not feature a full week of warm, sunny weather.


Just outside of the Silver Baron Lodge is a large expanse of turf ideally suited for housing several fleets of demo bikes. From road to mountain to cyclocross and gravel, there are always plenty of brand-new bikes to choose from? that is, until the snow begins to fall. With most of the trail network closed for safety reasons, and the surrounding roads slick with icy patches, only a very small handful of courageous (or crazy) attendees braved the elements for a ride. And those that did returned shortly thereafter.

ENVE has released an all-new set of 650c wheels called the SES 5.6.


ENVE CONTINUES TO DELIVER
ENVE Composites, whose headquarters is located in Ogden, Utah (just down the mountain from Park City), has been one of Bike PressCamp’s biggest supporters, bringing out new and exciting products each year. For the 2014 event, ENVE was showing off the latest edition to its SES line of aerodynamically-optimized carbon road wheels. The all-new SES 5.6 wheelset is ENVE’s entry into the 650c wheel market, which are ideally suited for the smaller bike frames of shorter riders and many triathletes, whose arena has seen a resurgence in the wheel size in recent years. Like the rest of the SES line, the 5.6 set was developed by aerodynamicist Simon Smart and features a mismatched set of measurements: the front rim is 48mm deep by 27mm wide, while the rear rim is 56mm deep by 25.5mm wide. The SES 5.6 is available as a complete wheelset with Chris King R45 hubs for $3050, DT Swiss 240 hubs for $2900, or DT Swiss 180 hubs for $3475.


Another wheelset being shown off by ENVE was its new SES 3.4 Disc wheel. Designed for cyclocross racing, gravel riding and road cycling, the SES 3.4 Disc was developed from ENVE’s popular SES 3.4 carbon clincher. But rather than simply removing the brake track from the rim, ENVE went a few extra miles and completely redesigned the Disc version from the ground up. Without a dedicated rim brake track, the pair of 3.4 Disc rims weighs a claimed 815 grams, which is about 80 grams lighter than the rim-brake version. Available as a complete wheelset with Chris King R45 hubs for $3050 or with DT Swiss 240 hubs for $2900.

The ENVE SES 3.4 Disc wheels are dedicated to round stoppers, with no rim brake tracks to speak of.


‘We chose to adapt the SES 3.4 wheels into a disc-brake version because we believed that model to be most relevant to gravel riding and cyclocross racing markets,’ says ENVE’s Jake Pantone. ‘Their low weight and good amount of stiffness combined with a compliant ride quality just made sense. And by using a three-cross spoke lacing pattern, we were able to keep both front and rear rims at a 24-hole spoke count.’ Like the rest of the SES line, the SES 3.4 Disc wheels sport a wide rounded profile, along with mismatched front and rear measurements. The front wheel measures 35mm deep by 26mm wide, and the rear measures 45mm deep by 24mm wide. Like all of ENVE’s carbon rims, the SES 3.4 Disc rims are manufactured in the USA, right in the company’s Ogden, Utah headquarters.

Finish Line has released a wide variety of lubricants and cleaning products in the past few months.


FINISH LINE UNVEILS SEVERAL NEW PRODUCTS
Finish Line is one of the bike industry’s leaders when it comes to cleaning products, degreasers and lubricants. And the company has been hard at work this year releasing a bevy of new products. The E-Shift Groupset Cleaner is a degreaser designed specifically for use with electronic drivetrains (Shimano Di2 and Campagnolo EPS). Available in a 9-ounce size for $9.99 and a 16-ounce size for $14.99, E-Shift degreaser is a great option for those worried about damaging their electronic components with other harsh chemicals. Chill Zone is a penetrating solvent that Finish Line describes as ‘a rescuer of rusted parts.’ Simply spray Chill Zone onto a rusted bolt or stuck metal seatpost and let sit for a few minutes.

Getting as cold as 40 degrees Fahrenheit below zero, Chill Zone breaks down rust and allows old parts to function again. It sells for $9.99 (9 ounces) and $12.99 (12 ounces). Super Bike Wash has been one of Finish Line’s top-selling products for a decade, and it’s now available in a concentrated solution that sells for $9.99. The one 16-ounce bottle makes 4 liters of cleaning solution when combined with water.

Finish Line’s No Drip Chain Luber is the company’s most exciting seen at PressCamp.


Finish Line was also showing off its new No Drip Chain Luber at Bike PressCamp. The 2-ounce plastic bottle comes with a unique flip-open cap design that houses a small pad that makes applying lube to your bike’s chain easy and consistent. Selling for $8.99, the No Drip Chain Luber can be used with any lube on the market (although Finish Line would prefer you to use one of their six different lubes). It also comes with two replaceable pads, as well as a child-proof locking cap that prevents leakage when storing or traveling.

British company, Fabric, is bringing a wide variety of saddles to the American cycling market.


FABRIC: A NEW BRITISH INVASION?
Based in the UK, Fabric is an offshoot of the popular Charge brand of bicycle accessories. Created to embody an ethos of industrial design that emphasizes both form and function, Fabric has created a large line of unique saddles, along with a variety of mountain bike grips and handlebar tape. Several Fabric products have already been picked up by Cannondale for use on some of the brand’s highest-end road bikes for the 2015 model year, including one of RBA‘s favorites, the Cannondale SuperSix EVO Black Inc. But Fabric representatives insist that it’s main focus is on aftermarket sales, and that its products will suit a wide swath of the bike market.


Fabric’s three main saddle models are the Cell, Scoop and Line. The Cell is designed primarily for those who ride in a more upright position, while the Line is best suited for those who ride with a relatively low position. The Scoop is a middle ground model between the other two. Fabric will also make available three different curves, or profiles, Flat, Shallow and Radius, to give customers even more options as they attempt to find their perfect perch.

Fabric saddles will be available in a variety of colors to complement nearly every bike’s unique aesthetics.


Fabric takes a unique approach to saddle manufacturing. While the vast majority of other saddles on the market are constructed with a cover wrapped over a carbon or plastic base and then glued or stapled together, Fabric’s construction method allows for an ultra-clean interface between cover and base. There will also be plenty of color combinations available, as well as several different rail materials including steel, titanium and carbon. Fabric is also hard at work on a customization program, which will allow customers to pick their own color combinations or the base, rails, cover and logos. An entry-level fabric saddle with steel rails starts at the ultra-sweet price of around $60. 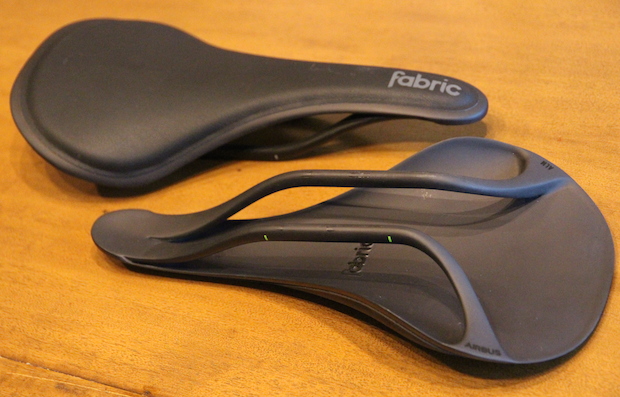 The ultra-light ALM carbon saddle from Fabric will retail for around $300.


Fabric has fostered a unique relationship with the aircraft manufacturer, Airbus. And this relationship has brought about some incredibly unique manufacturing techniques heretofore unseen in the bike industry. The ALM saddle is a recipient of such techniques, and its unique and eye-catching carbon construction nets a total claimed weight of about 120 grams. It’ll be available at the beginning of September. 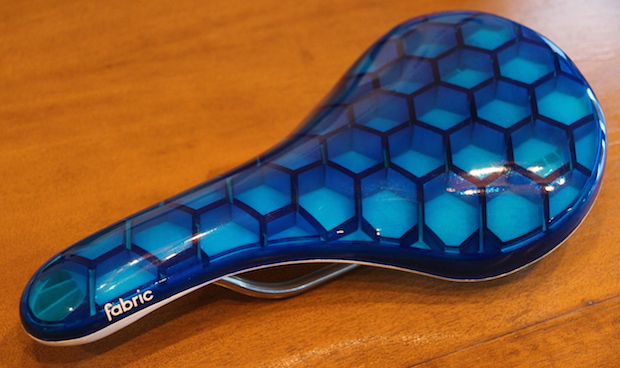 Fabric’s Cell saddle is one of the most unique we’ve seen in quite some time.


Fabric has also developed a relationship with ‘a major consumer athletic footwear manufacturer.’ And that relationship, like the company’s deal with Airbus, is bringing new technologies to bike components. This is a Cell model saddle that features a unique honeycomb construction with air chambers built into the polyurethane top providing extra cushioning. ‘It’s like having the effect of a gel saddle, but without the extra weight of gel,’ said a Fabric representative. 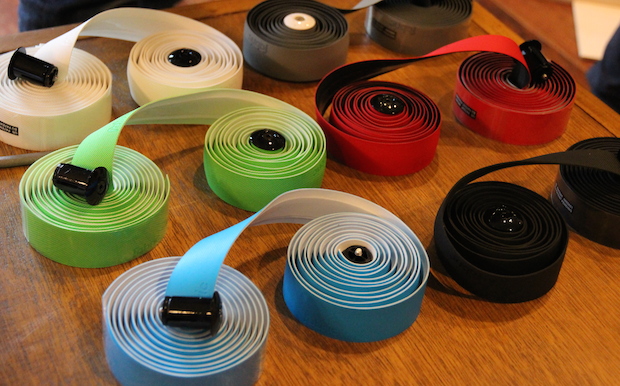 
Fabric’s focus during its initial phase of existence is on contact points. And with their expansive line of saddles, Fabric is also offering several different types and colors of handlebar tape. The most unique handlebar tape is, without doubt, one made from buffalo leather, which Fabric claims is more supple and comfortable than traditional bovine leather tape, as well as synthetic leather tape. Look for Fabric products to go on sale on the company’s website soon.