Being There: Inside The Look Factory 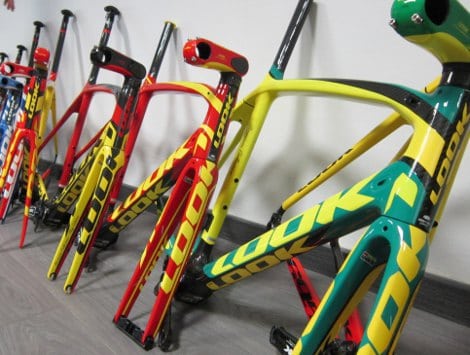 As this is being written, I’m up in room 502 at the Novotel Hotel within earshot of  (the horrid) Charles DeGaulle airport in Paris, France. In what amounted to one of the most wham-bam trips I’ve engaged in for some time, the last three days took me from home to Freiburg, Germany, and then to Nevers, France before heading home all within a four day period. Look’s Director of PR & Media, Michael Kerbage, was our immediate host/baby sitter/driver and all I can say is thankfully he has good taste in music which made the six hour drive from Freiburg to Nevers tolerable. 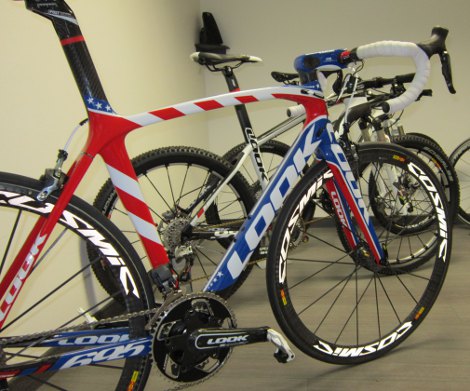 Look has found much success in their new Flag Series of bikes. Japan is currently the top seller, followed by Canada and France. Both Brazil and America flags are selling well too.

After that somewhat arduous drive from Freiburg, our battered Citroen passenger van ambled into Nevers, just in time to get the last servings of the hotels stash of French stew. On tap the next day would be a tour of Look Cycle’s  French factory where all the road frames get their finish work done after they’ve been manufactured in Look’s off-site manufacturing facility in Tunisia. 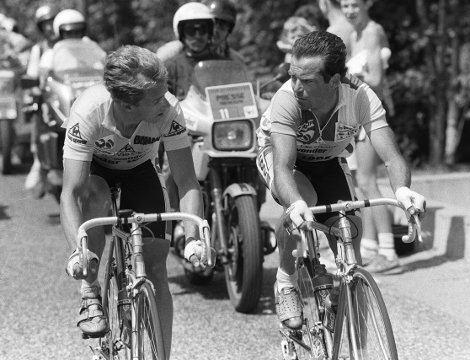 The famous battle between teammates; Greg LeMond and Bernard Hinault in the 1986 Tour de France.

Look was founded in 1951 as a maker of ski bindings. In 1984 they began producing clipless bicycle pedals and soon thereafter bicycle frames. With the wily Frenchman Bernard Hinault aboard, the brand won the Tour de France in 1985 and then repeated with the wily American Greg LeMond in 1986. Despite their success in the world’s biggest bike race, the explosive popularity of their pedals and their pioneer status in the carbon frame market, the French maker was on a bit of death spiral. 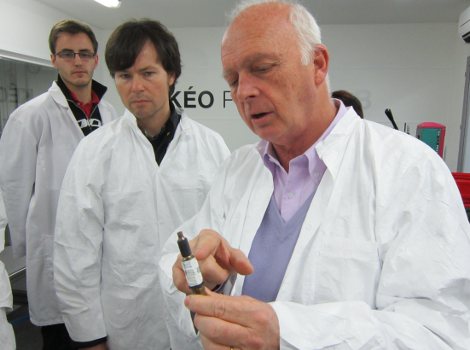 Look GM Thierry Fournier points out the larger spindle required for the new KeO Power pedals due to the need to provide enough surface area of for the needed strain gauges.

In 1998, Look’s current GM Thierry Fournier, along with two partners and about 40 workers rescued Look from a near death experience and breathed new life into the history making brand. From roughly $12 million in revenue when they took over, Look is now banking approximately $43 million in revenue a year with sights on making a cool $50 million within a few years.

But, enough about the business, what about the bikes you’re probably wondering! In case you don’t known too much about the brand, Look is a virtual leader in carbon fiber frame production and technology.  The Look 695 is a bike that we have raved about before (see RBA’s Look 695 test), not just for being one of the most beautifully crafted bikes on the planet, but also due to its ride quality and the proprietary crank, stem and seat post designs that help set the bike apart from all others on the road. 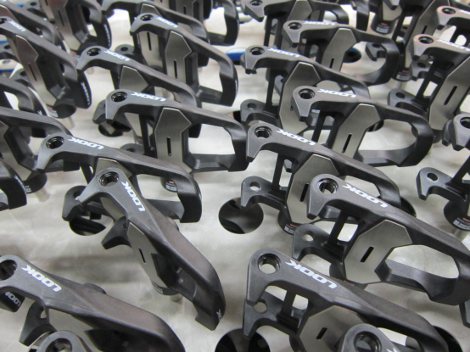 Every Look pedal is made in the Nevers factory with 100% French parts and although daily production quantities can vary, one million pedals are produced each year.

I’m not sure if Thierry remembered me from the last time I ran into him, but either way, he was an informative and enthusiastic tour guide and is no doubt proud of the carbon niche that he has helped create. Thierry was quick to acknowledge the ‘shabby’ confines that Look currently calls home and it really is a far cry from what you’d expect of a factory that pumps out such exquisite frames. But as we all know, sometimes the best chorizo con huevo burritos can come out of the most beat down looking Mex joint eh? 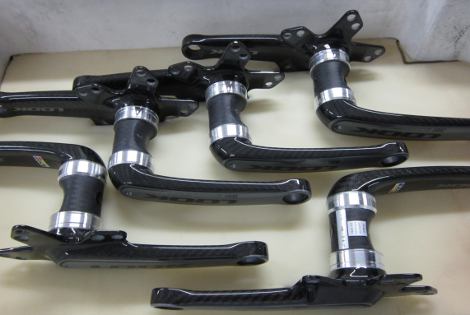 Look’s proprietary, one-piece carbon Zed 2 crank is truly a work of both art and engineering prowess. 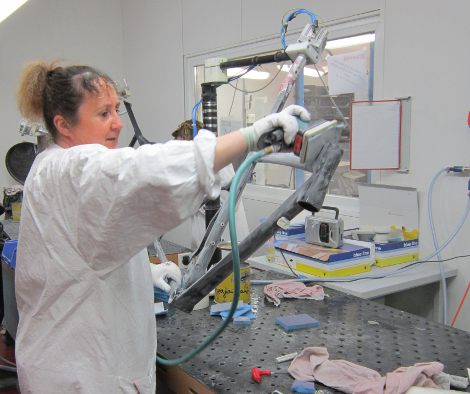 Here’s what a frame looks like mid-way through the finishing process.

Coincidentally, in a tone reminiscent of the many conversations I’ve had with Valentino Campagnolo regarding his commitment to avoid relying on Asian productions, Thierry too is determined to maintain as tight control as possible over his production and technology. However, just as Valentino is somewhat beguiled by domestic labor costs in Italy, Thierry too is quick to admit similar cost constraints in France. In fact, he readily admits that as expensive as a Look frame is now, it would be unbearable if he used French labor for the tedious process of making each frame. As it is, each of the bikes in the Flag Series takes over five hours of paint work alone. All of the carbon material used in Tunisia is Japanese in origin before it’s shipped to France for the pre-preg work, and then finally shipped to Tunisia.

Opened in 2000, the Tunisian factory is home to about 250 workers who assemble the frames from scratch.  Afterwards, each frame heads back to Nevers via a two hour lorry ride, where they are then stripped of an original clear coat varnish and then (re) hand finished and painted. 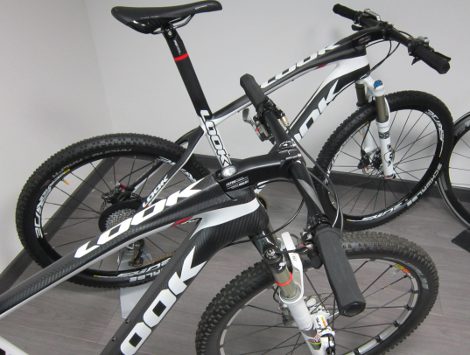 Despite the seemingly odd fit, Look has found some success with their radically shaped 920 mountain bike which borrows from the road bike’s unique C-Stem with a flippable A-Stem. Look said a 29’er version should be headed down the singletrack for 2013. 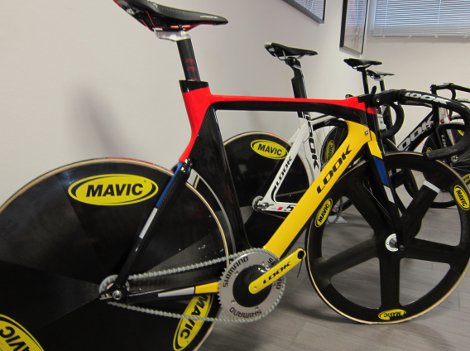 No, there aren’t many track bikes sold today, but in the sport-specific market, Look makes a killing with their Olympic proven frames. 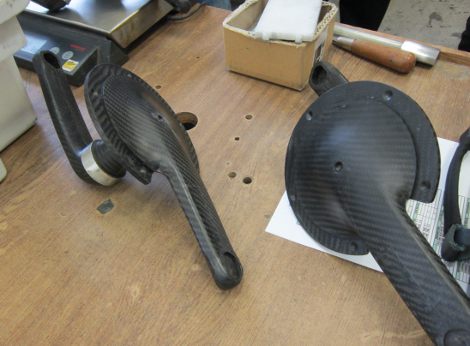 Here’s the track version of the Zed 2 crank. 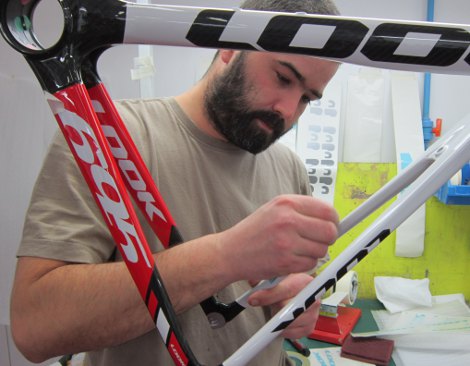 There’s one reason the finished product is so exceptional – a close-eye put on all the details. 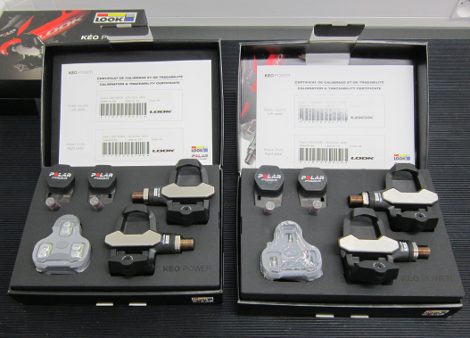 Okay, so the first part of our trip consisted of a day at the Rad Laboratory where we got the low-down on the much talked about Look KeO Power pedal that houses a Polar power meter inside the pedals. Since we first received the pedals, there were already called back, so despite the talk of us getting a new pair by next week, I’m going to hold off comment for now. 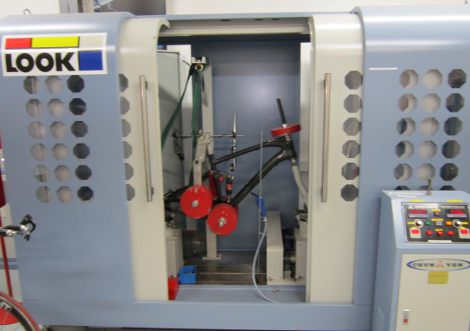 Besides the frame finishing that takes place in Nevers, there is also a QC department and test lab where everything gets tested for durability. 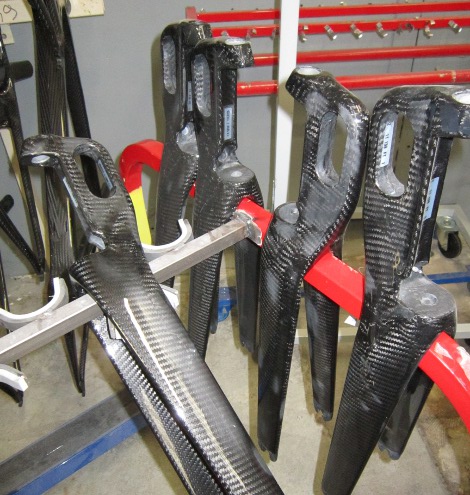 These Offset Aero forks used in the 596 Tri bike are another indication of how progressive Look is with their home brewed R&D force. 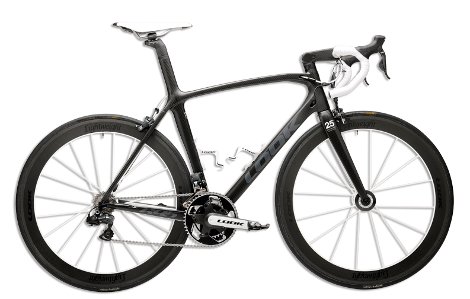 New for 2012 is the limited edition 25th Anniversary 695 that celebrates Greg LeMond’s first Tour de France victory. Available as either a frame or (expensive) complete bike with Lightweight wheels. 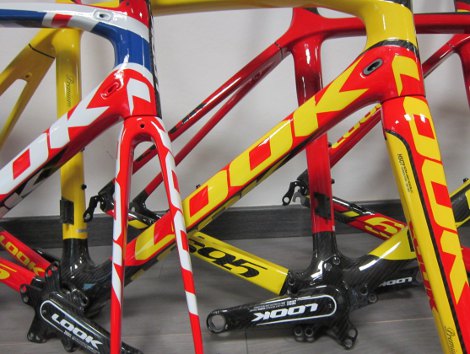 A svelte black zip-up Look jacket, plus a pair of Polar socks and water bottle will go the random entry that tells us in convincing style why YOU ride,which Look they’d want most in their garage and where it was that I first bumped into Thierry Fournier. Send your entry to: Why We Ride.

101 Tips You Should Know, The Finale