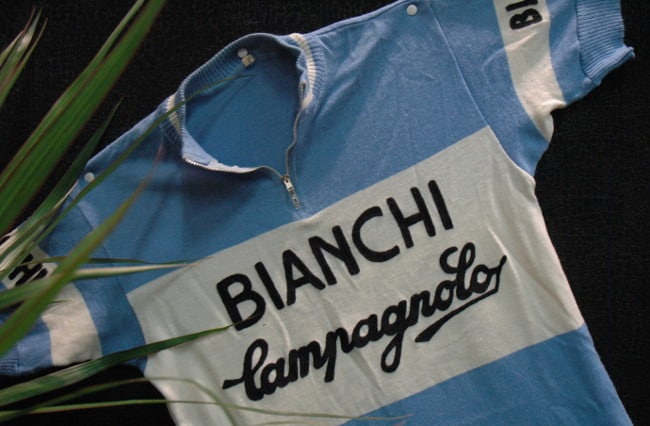 Share
Having good or bad luck really depends on how any one particular person defines luck to begin with. Just five days after the Interbike trade show in Vegas was over (which came just seven days after the Eurobike show in Germany), I was on a plane to Italy to attend Italy’s version of a national bike show – the ExpoBici in Padua, Italy. I have to admit briefly harboring second thoughts about attending knowing that the six day trip would only be further injuring an already mortally wounded training schedule for the upcoming Levi’s Gran Fondo.

But, so be it. It’s Italy, it’s bicycles, and more importantly, as I’ve told my daughter countless times, it’s family. So here I sit in room 825 of the Padua Sheraton looking out the window at a very un-Italian view of a freeway interchange and an Ikea furniture store. As to what I saw inside the show, well, here tis…. 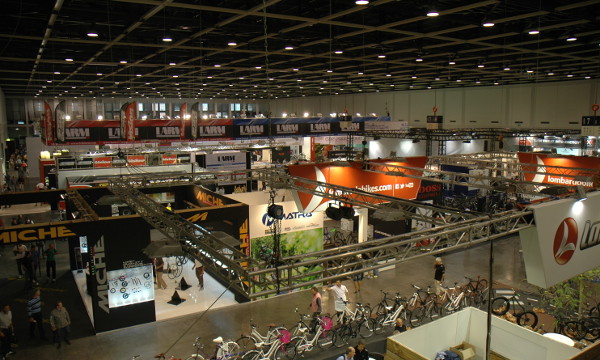 The ExpoBici show is smaller than both the German and American bike shows, but it is by no means small. It is also the only place to find many Italian brands that don’t cross the border. 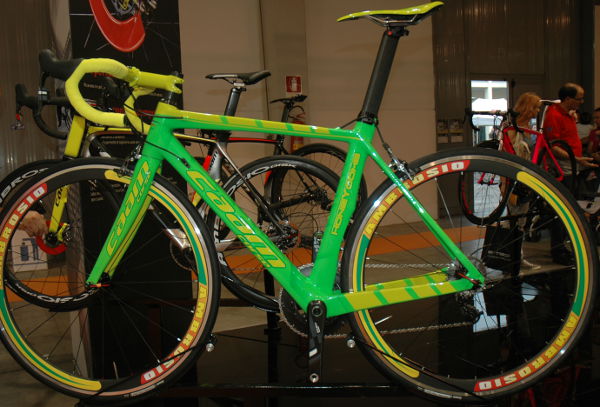 Just as it was last year, the Caam Corse booth was once again filled with some of the most brightly colored bikes seen. The Italian brand has a catalog filled with both monocoque and tube-to-tube frames. 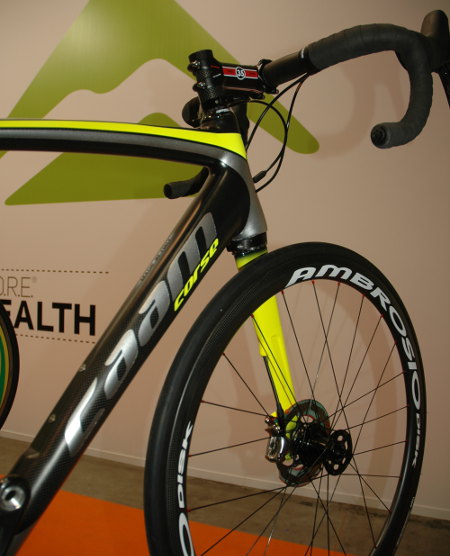 The Caam Corse bikes also had their wild single-sided carbon fork on view. 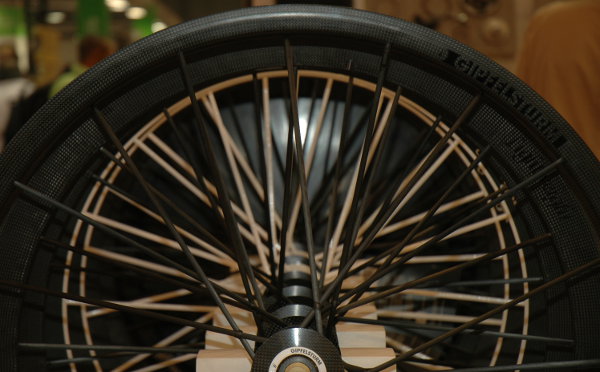 Recognizing the importance of the Italian market Lightweight wheels still made sure to have a presence in Italy even though the massive Eurobike show was held in their front yard in Friedrichshafen, Germany was held just three weeks prior. 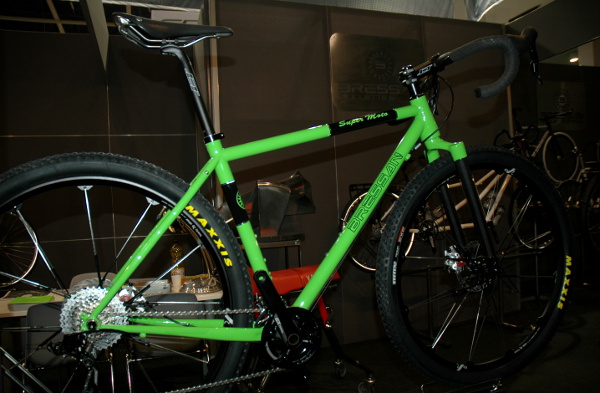 As soon as the owner of  Bressan Bikes saw me checking out his mountain bike with drop bars he yelled out the one name that encompasses all that is 26 inch wheeled with drop bars – “John Tomac!”  Tomac was of course the former 7-Eleven road rider who famously returned to his dirt bike  roots racing for Yeti Cycles with dropped bars. 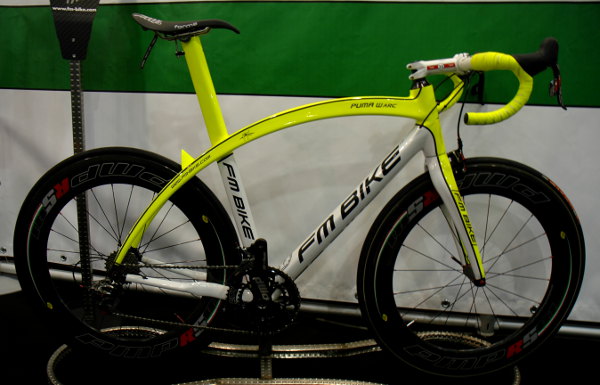 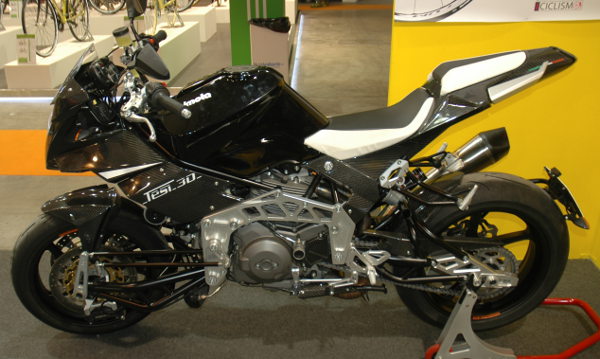 Bimota is a famous high performance motorcycle company with a history of building super exotic bikes like this wild Ducati with a Tesi front end. So what you ask? 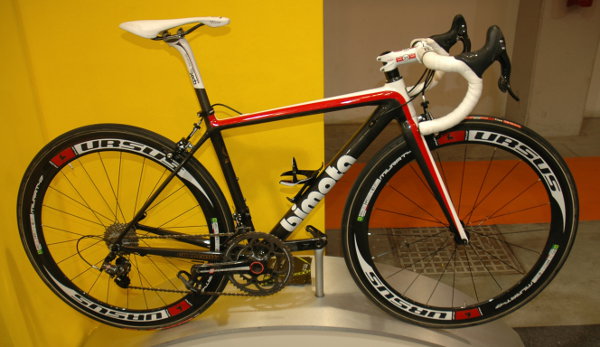 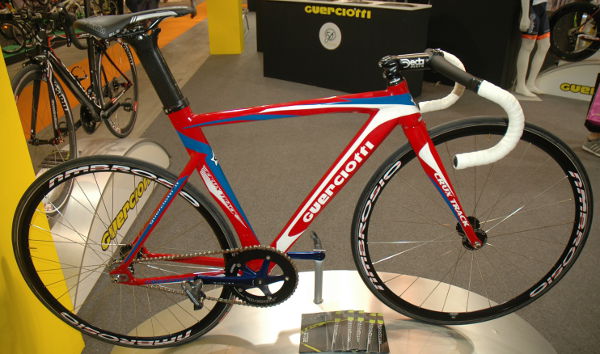 Of course, Guerciotti was also happy to show off a complete line of their own bikes as well. The Crux Track bike has a certain simplicity to it that makes it attractive despite its singular purpose. 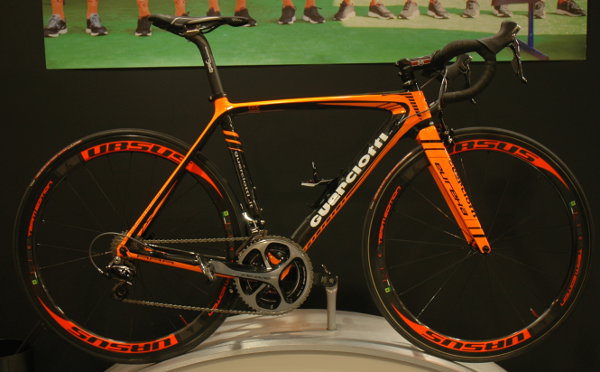 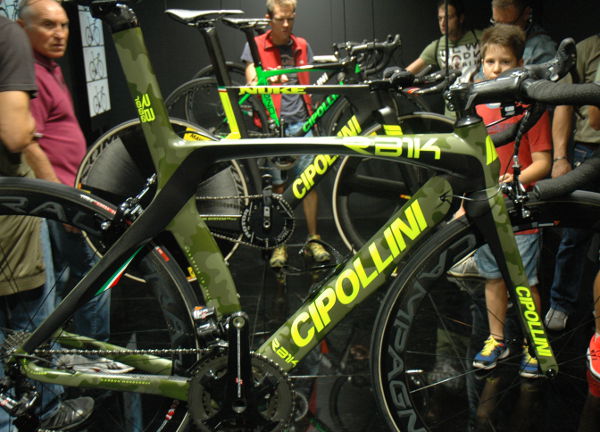 The Cipollini booth was always a packed affair as not only were the bikes something to behold, but the launch video for the new Nuke TT bike had show goers enthralled…see for yourself 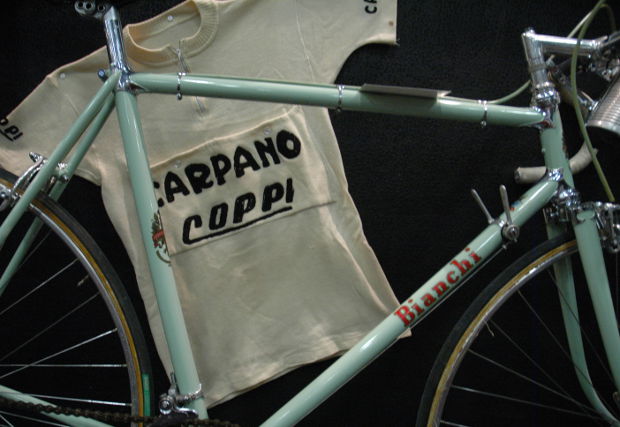 One of the best things to see in Italy is the continued passion that many retain for the racers of all ages. From Mario Cipollini to Fausto Coppi, the tifosi wear their enthusiasm for racing for all to see. There was a nice collection of old Bianchi race bikes from the 30’s, 40’s and 50’s on hand that provided a nice then-and-now comparison. 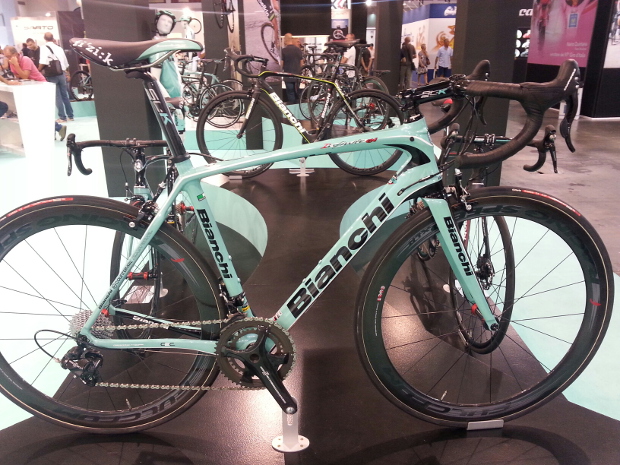 And of course, when it comes to Italian racing, no brand speaks to it better than Bianchi. 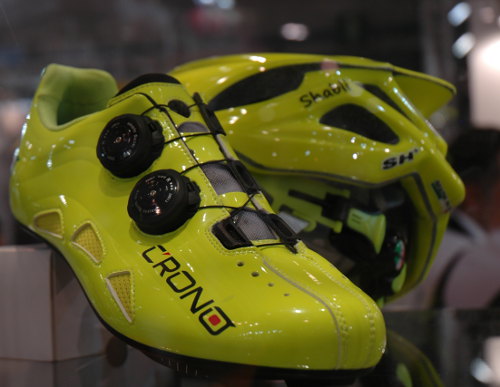 As famous as Italy is for their frame makers, it is also the land of cycling shoes. Crono is another brand throwing themselves in a ring filled with an array of local competitors. The Futura shoe uses the ATOP dial fasteners and have a claimed weight of 470 grams per pair. 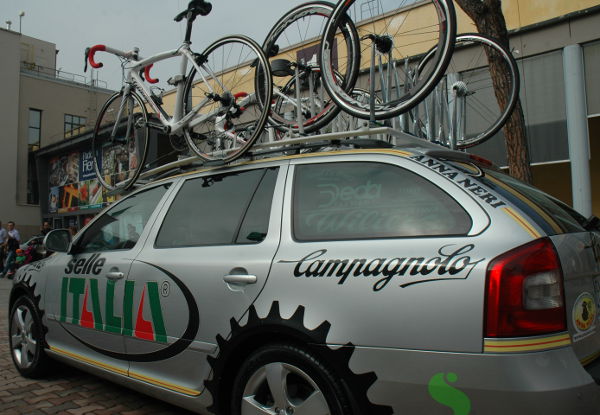 Skoda wagon notwithstanding,  with Campagnolo, Wilier and Selle Italia – it doesn’t get much more Italian than that. 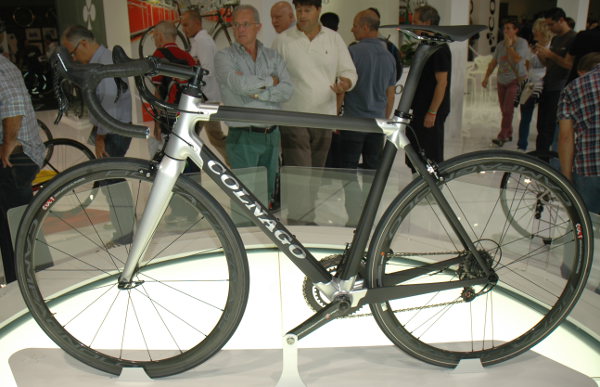 Only 60 versions of this special edition Colnago C60 anniversary bike with dual mount Colnago brakes will be sold. It won’t be cheap, nor should it be. Every C60 is a collectors item. 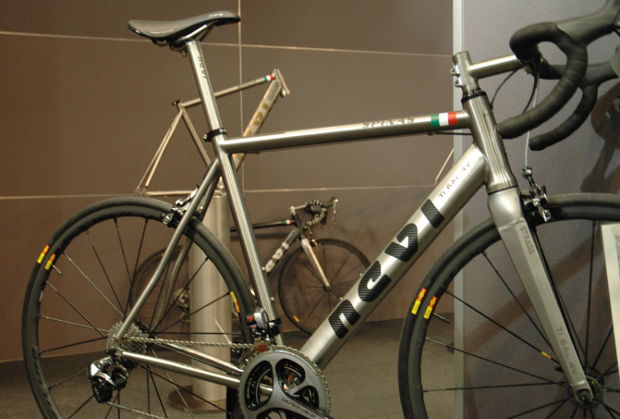 Nevi has been pumping out Italian made titanium bikes for years and this year they showed up with a new Spinas road bike made with 6.4 ti tubes and a sweet titanium fork. 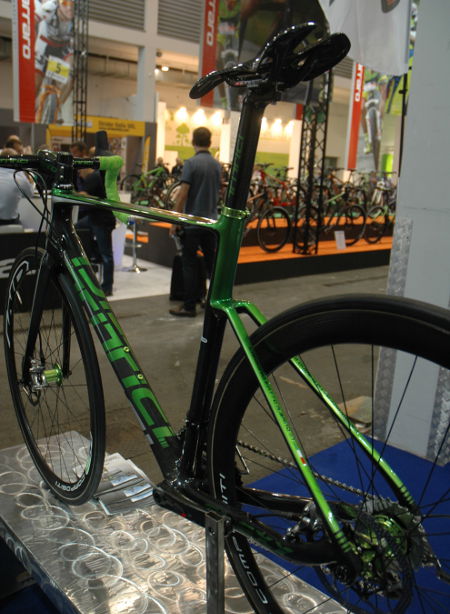 While it’s now become commonplace to hear the word “compliance” used as a positive benefit of many new frames, most bike brands still avoid the word “flexy” when speaking about a frame’s performance. Apparently, the folks at Titici Energy Bike never got that memo. In fact, they even had the word “flexy” inscribed on the chainstays of their road and mountain bikes. Why? 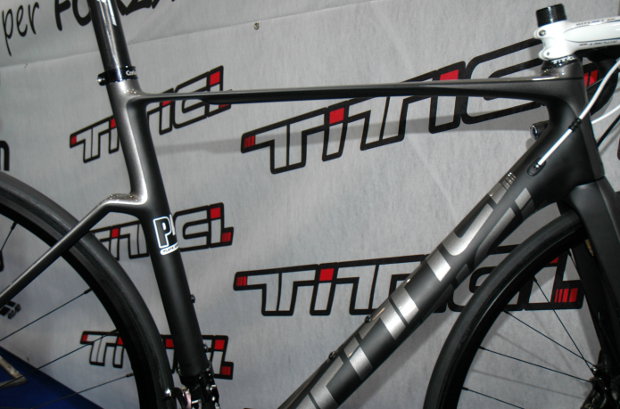 Check out the shaping on the top tube where it intersects the seat tube. We’ve seen “pencil thin” frame tubes, how about pasta thin? 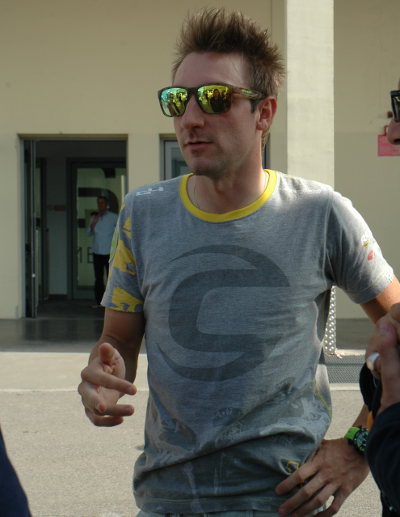 With the World Championships taking place in Spain the following week, there weren’t too many Pro riders at the show. Cannondale’s Elia Viviani was the exception. There is still no word if the Italian sprinter will make the move to the new Garmin Cannondale team, but expect it all to be known by the end of October. 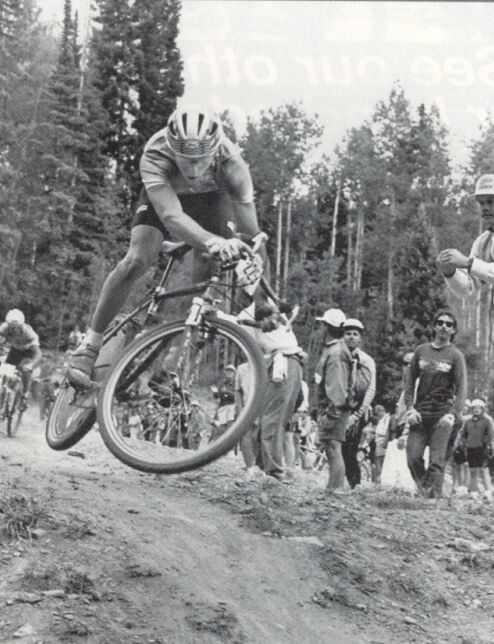 Speaking of great racers, here’s a shot of John Tomac aboard his one-off Yeti C-26 with the drop bars. A RBA schwag bag goes to the random entry who answers the following question: What race was this photo taken at?