Being There: Riding (and winning) The Spy Belgian Waffle Ride 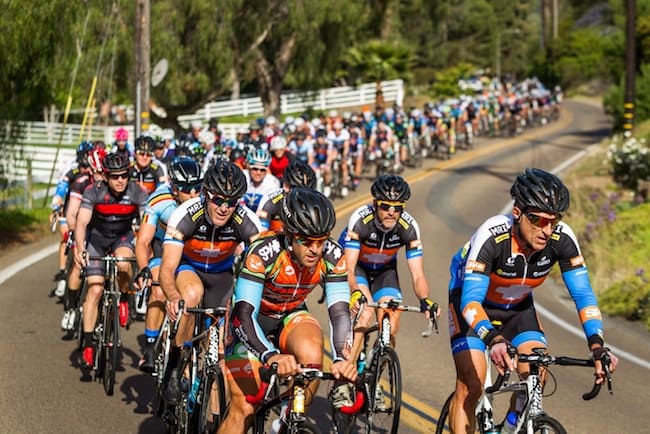 Share
A 22-mile neutral promenade made for a relaxing start to the 134-mile event. Once the neutral ended, there was little relaxing to be done. (Photo: Jake Orness)
If Eddy Merckx designed his dream race route, the Belgian Waffle Ride would surely be it. Year three of the European Classics-style event held in North County San Diego was bigger, badder, dirtier, and yes, definitely more painful than ever. How do you outdo last year’s route that was 130 miles with 15 miles of dirt and 10,000 feet of climbing? You make the 2014 edition with 134 miles, 30 miles of dirt, and 11,000 feet of climbing?oh mercy. As the ride’s difficulty grows, so too does its lore as a must-do event, regardless of whether your preferred cycling discipline is road, mountain, or cylocross. This year, the BWR filled the allotted 500 rider spots within days of registration opening, a clear sign that Spy Optics CEO and BWR founder Michael Marckx’s approach to inspire riders with a unique challenge has been nothing short of a success.

Whenever it looked as though we would get some respite from the climbs, the Spy crew was sure to add in a dirt section in order to make sure the challenges were prevalent throughout the entire BWR course. (Click for the Stava ride file) 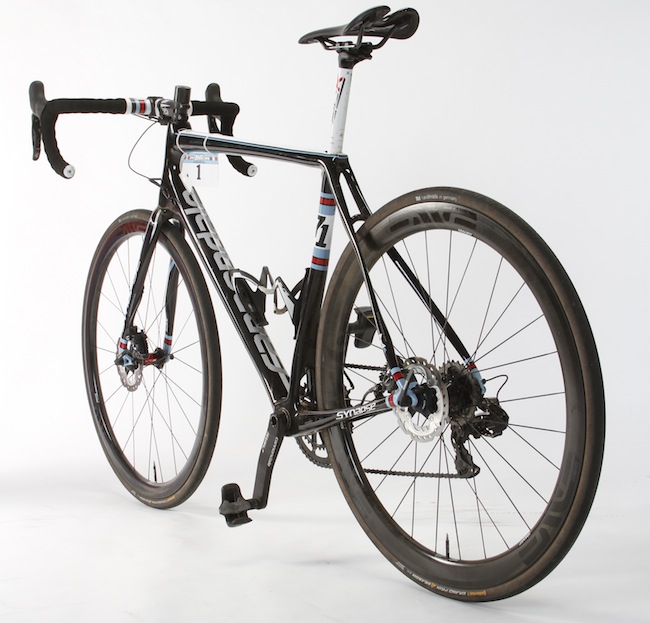 Having ridden a Specialized Tarmac SL4 last year, which just barely allowed enough clearance for a 28c tire and lacked any vibration damping features, I changed my priorities and opted for a bike with a high level of compliance while still maintaining a race feel. Cannondale’s Synapse Hi-Mod Disc had everything I was after: vast amounts of tire clearance, frame and fork compliance features, an extended wheelbase, and even a bonus-disc brakes. 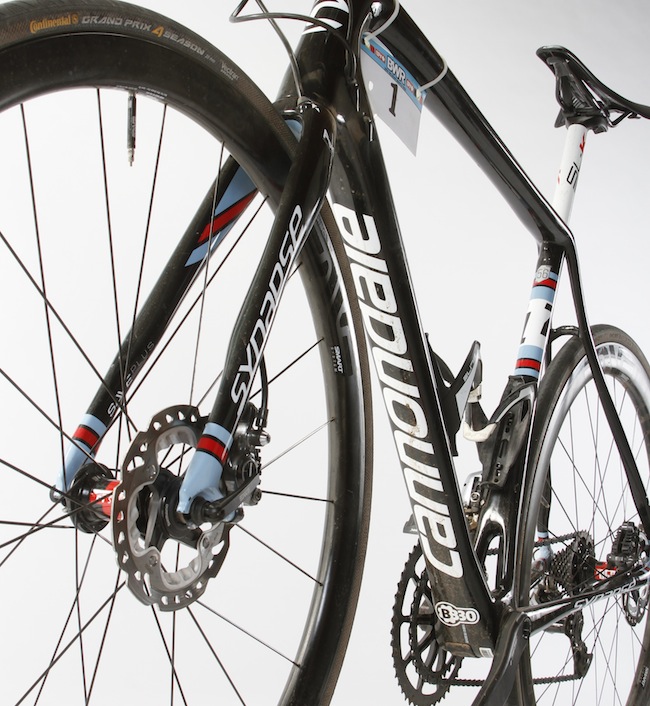 Unlike a pure gravel race, where you’ll more than likely need a bike that can accept a 35c or larger tire, the BWR is best tackled on a road bike, but with the biggest tires the frame can handle. A couple changes were made to the stock Cannondale Synapse Hi-Mod Disc ($9,750) for BWR, including the addition of robust 28c Continental Grand Prix 4-Seasons tires and Lizard Skins DSP 3.2 handlebar tape for some extra cushion. 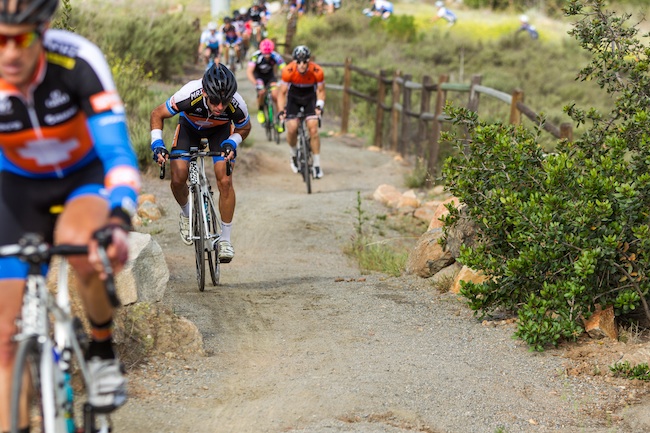 The switchback singletrack of Lemontwistenberg was a new addition to the 2014 BWR and it resulted in shattering the field. (Photo: Jake Orness) 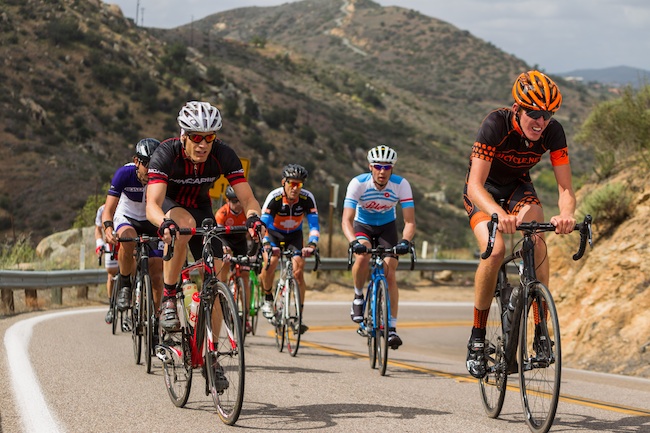 The first true climb of the course’s 11,000 feet of elevation gain took us up Highland Valley Road, and eastward toward even bigger and dirtier climbs. Coming at only 45 miles in, there were already plenty of tired bodies with 90 miles still to go. (Photo: Jake Orness) 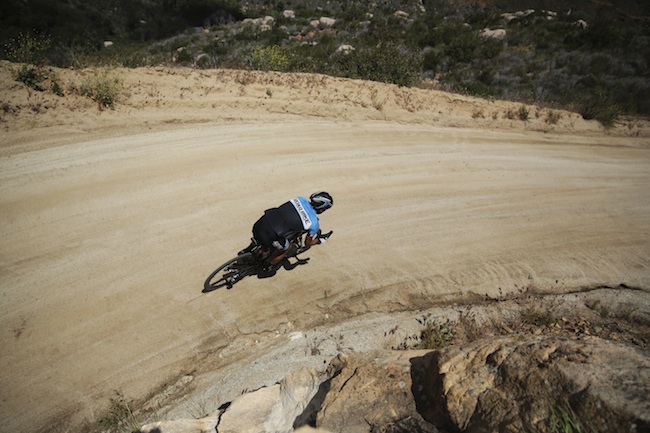 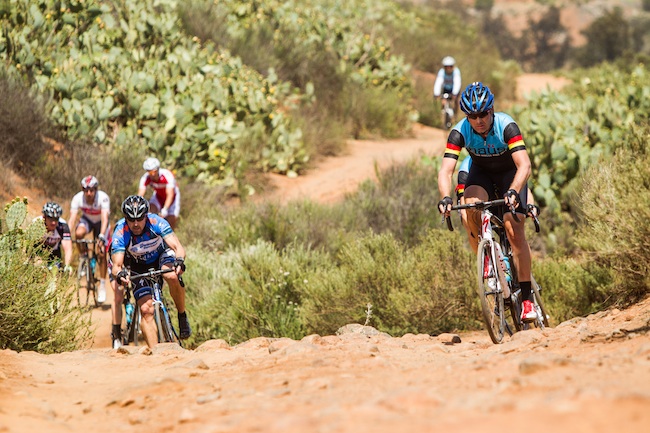 Half-buried, softball sized rocks littering the entire trail had us bouncing from one to another hoping we didn’t hear the dreaded hissing of a tube spewing its air, or if we did, we hoped it was the guy next to us. (Photo: Jake Orness)

What was our reward for conquering the final dirt section? Five miles of mostly up, with the final kilometer to Double Peak a brutally painful 11% average. (Photo: Jake Orness) 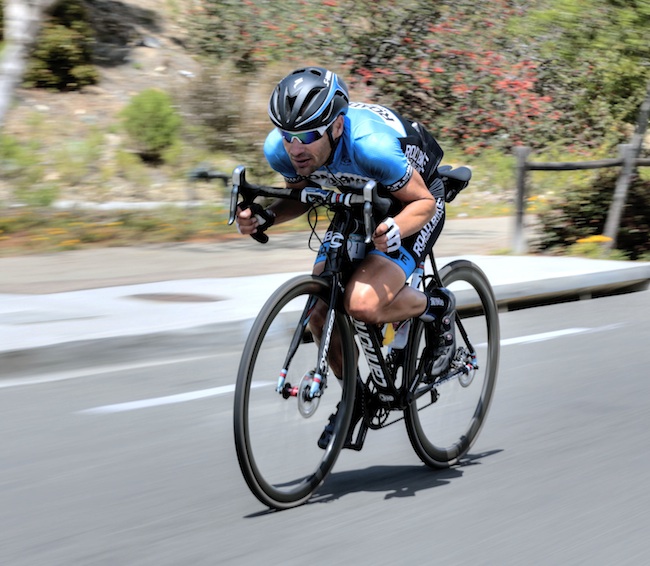 After summiting Double Peak, it was a mostly downhill, 10-mile run in to the finish line at ViaSat, bringing some much needed coasting. (Photo: Kristy Morrow) 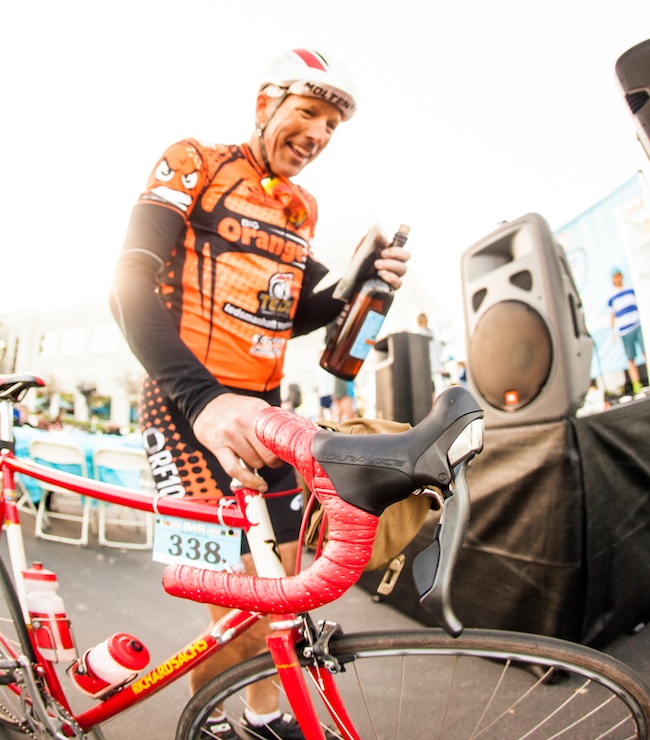 Hour after hour finishers kept coming in, each sharing stories of their own BWR experience while inhaling bratwurst, muscles, waffles, and washing it all down with one of The Lost Abbey Brewery’s ales in the festival area. Of the 500 starters, 374 finished what, for the majority, would be the most unique and challenging event they’ve been a part of, all the while helping the Challenged Athletes Foundation since proceeds from the BWR went to the charity. (Photo: Jake Orness) 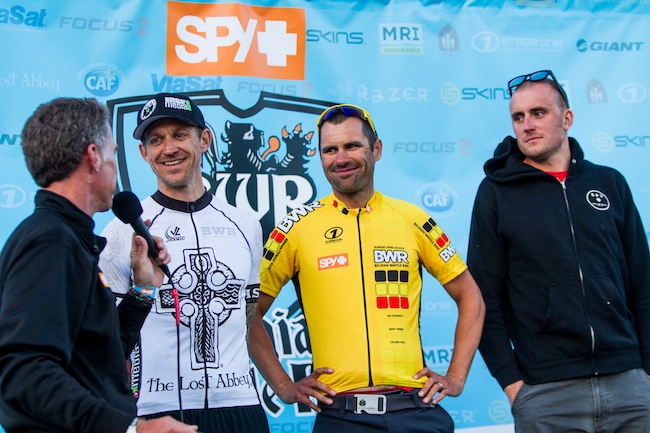 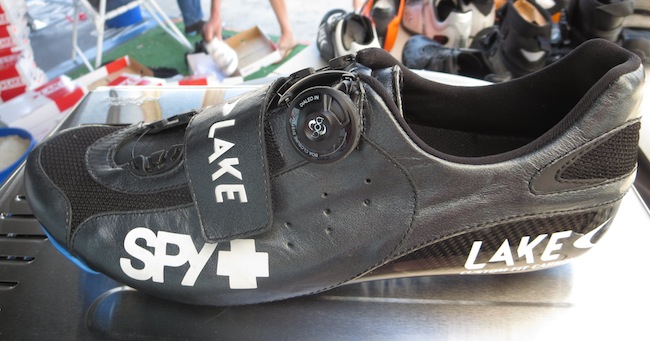 Lake Cycling stepped up with a pair of custom shoes for both the male and female overall winners. The shoes feature kangaroo leather uppers and a heat-moldable carbon heel cup. Although not overly colorful, Lake’s custom program does allow you to choose from nine colors for the leather uppers, in addition to nine accent colors. 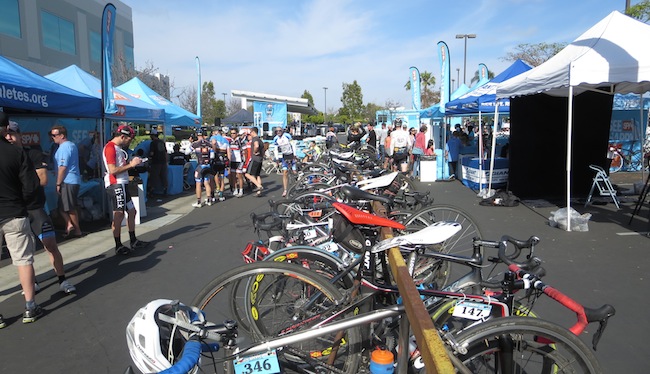 Bike choices for the BWR ranged from the everyday race bike, to full cyclocross bikes (with slick tires), to steel and titanium classics. 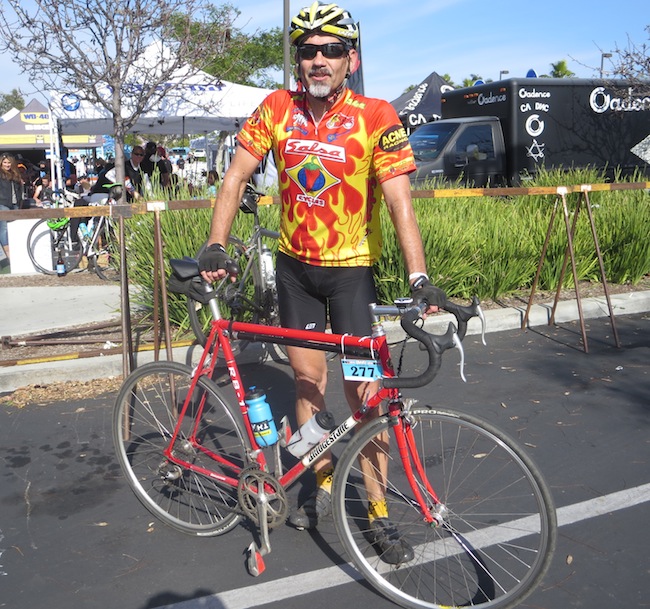 Heavy? Yes, but getting through the BWR in one piece was never in question for this old steel Bridgestone RB-1. 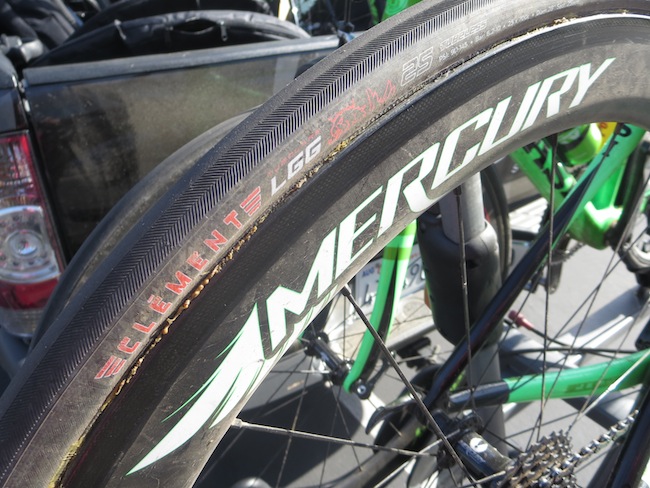 Everyone has their own idea of what is a BWR-worthy setup. The MRI-Monster Media riders used tubular Mercury wheels with Clement LGG 25c tires. Considering they didn’t have any flat tires on the day, it proved to be a worthy choice. The 2nd, 3rd, and 4th riders overall in the men’s race all used Clement tires. 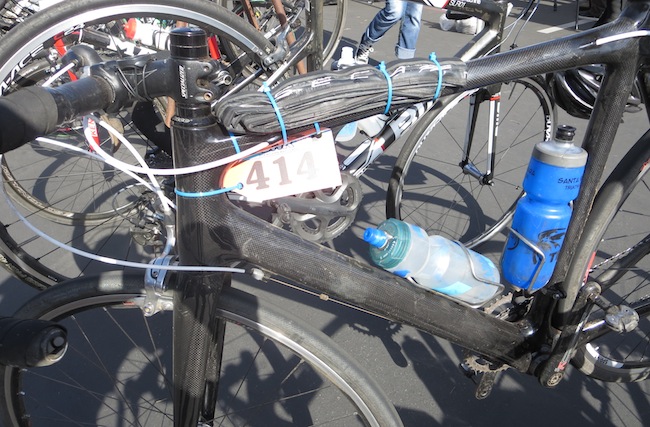 Being prepared for anything was the name of the game for some BWR riders. With tire damage being the number one reason why riders can’t finish, this guy wasn’t going to let anything stop him. 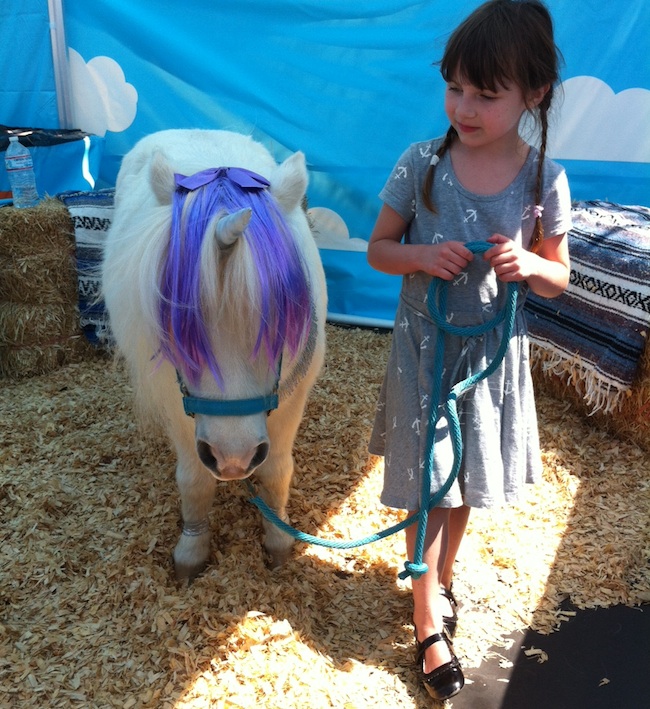 The festival area wasn’t only about food, beer, and bikes, it was actually family friendly as well. My daughter got to see and pet her very first unicorn (it was a first for me too). There was also a bounce house that kept the kids entertained for hours.
Details for the 2015 Spy Belgian Waffle Ride will be found on Facebook.