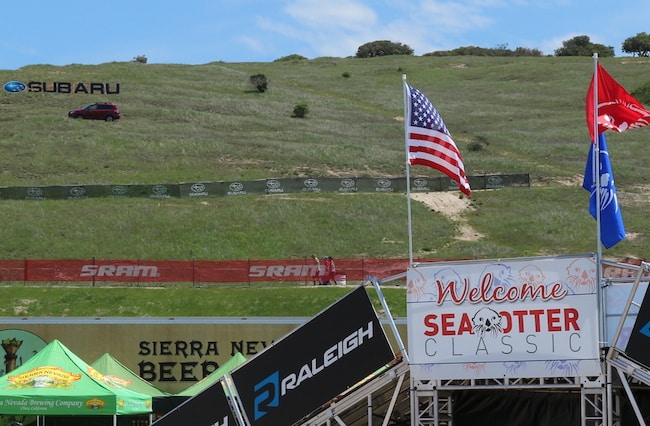 It’s that time of year again! Every April, the bike industry converges on the famed Laguna Seca Raceway in Monterey, California, for the Sea Otter Classic. A four-day festival of mountain bike, road and cyclocross racing, as well as an opportunity for the public to check out some of the latest and greatest bikes and products coming their way soon, Sea Otter is bigger than ever in 2014. Here’s a look at some of the unique bikes, accessories and other interesting tidbits that caught our eye. Look for more exclusive coverage from Sea Otter soon, right here on RoadBikeAction.com! 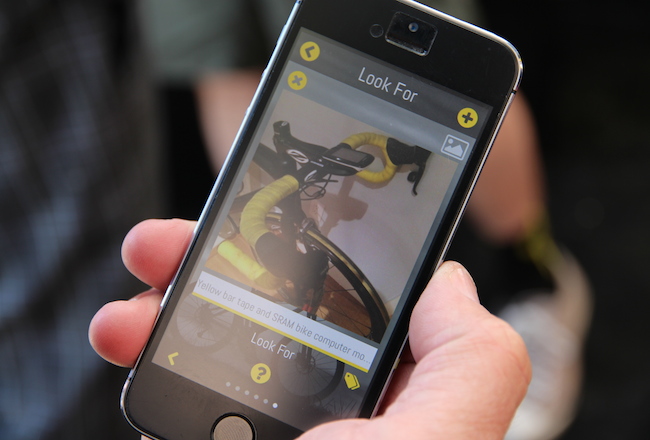 One company making its debut at Sea Otter was Project 529, a software and Smartphone app development startup founded by Jay Allard, a former software engineer for Microsoft. The company’s first product is an app called 529 Garage, a free service that aims to quell bicycle thievery. Users can download the app to their iOS devices for free and then use it to register their bikes to 529’s database. Details include serial number, color, make, model and other details. If your bike gets stolen, alert 529 through the app service, which will then spread to the word immediately to local bike shops and law enforcement, thereby improving response time and the chances of getting your bike back in one piece. Project 529 should have an Android-compatible version soon. Remember to search for “529 Garage” in the iOS App Store/iTunes. 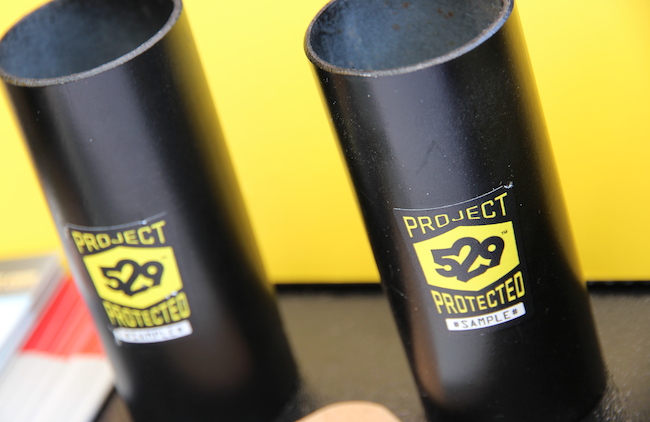 Project 529 also offers a line of ‘Shields,’ which are decals printed with a serial specific to your bike that’s kept in the company’s database. Upon return of your stolen bike, the Shield serves as an extra method of proving ownership of the stolen merchandise (especially in the event that your bike’s standard serial number is removed or painted over). Project 529 went to 36 different decal-makers before finding the toughest material available. Sea Otter attendees were encouraged to try and remove some sample Shields, all to no avail. These things are tough, and they have an expected lifespan of 10 years! Thieves will have a nightmare of a time trying to remove them, plus the Shields can serve as a deterrent. A single Shield sells for $10, while a pack of 4 sells for $25. 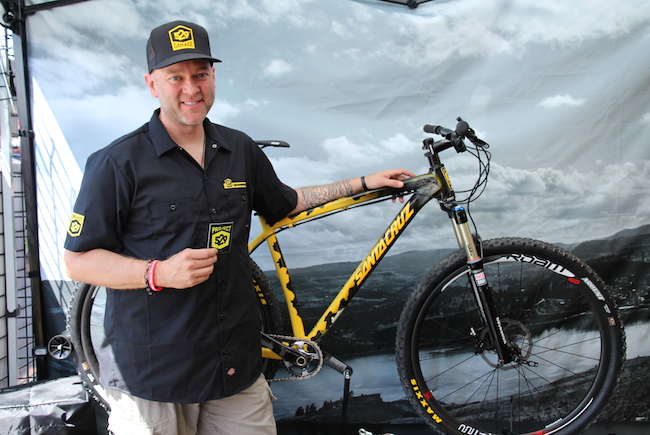 ‘My friends and I started a [mountain bike] team called ?529,’ because we realized that we weren’t spending enough time on the important hours of the day, the 5-to-9,’ says Project 529 founder, Jay Allard (above). ‘We were spending way too much energy on the 9-to-5. A few years ago, I left Microsoft and saw an opportunity to take technology, cycling and the bike industry and bring it all together to give people better tools to go out and ride more. We started with the idea of preventing bike theft because we wanted to do something that engaged the cycling community and would help solve a real problem. We have a long list of ideas that we want to bring to market, and this is just the first. We know we’re not going to solve theft one hundred percent, and we know that what can be solved won’t be done overnight, so we decided, ?Let’s start now.” 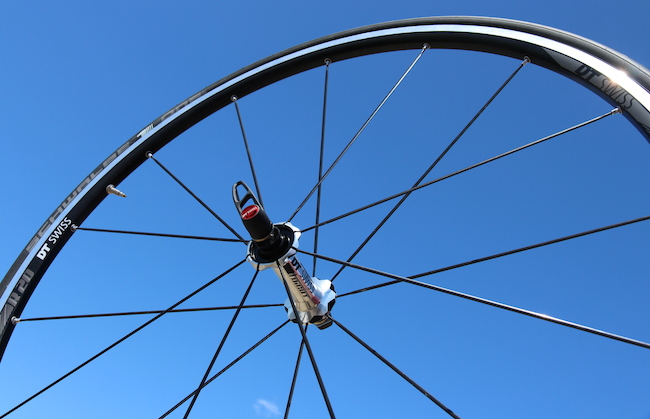 DT Swiss released an all-new wheel at Sea Otter. Not flashy, exotic or expensive, the company’s new R20 Dicut model is nevertheless an important new entry for the Swiss outfit. The R20 Dicut is a basic aluminum clincher that is tubeless-ready, sports a very sharp looking set of high-quality hubs, and carries a staggeringly low retail price tag of $738 for the set. Look for them to be available around June or July of this year. 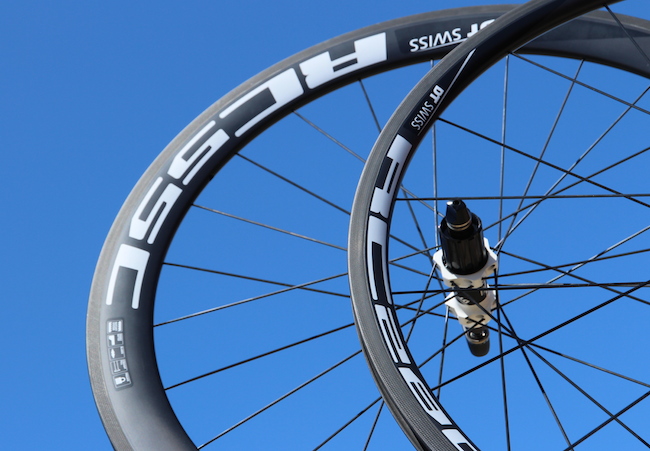 Also on display at Sea Otter from DT Swiss was the company’s recently released RC line of full carbon clinchers that are? wait for it? tubeless-ready! Yes, full-carbon clinchers and road tubeless compatibility. Three different depths are available (28mm, 38mm and 55mm), and all three come in both rim-brake and disc-brake versions. Pictured above are the 28mm and 55mm rim brake options. 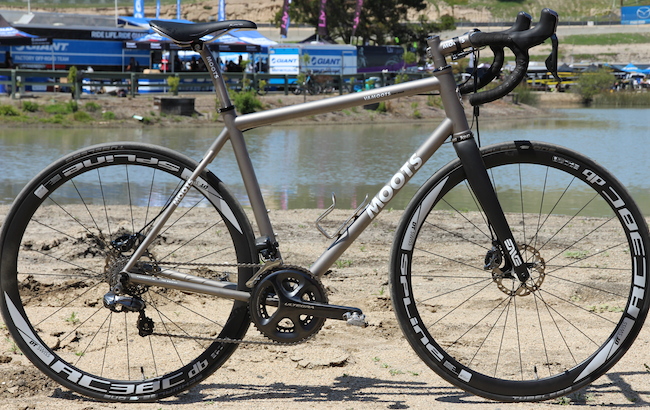 Might this be the ultimate gravel grinder wheelset? A set of the RC38C DB wheels were mounted onto a Moots Vamoots bike for display at Sea Otter. DT Swiss has high hopes for the new RC line, thanks to the appeal of combining a full-carbon clincher wheelset with tubeless compatibility and the ability to run disc brakes. 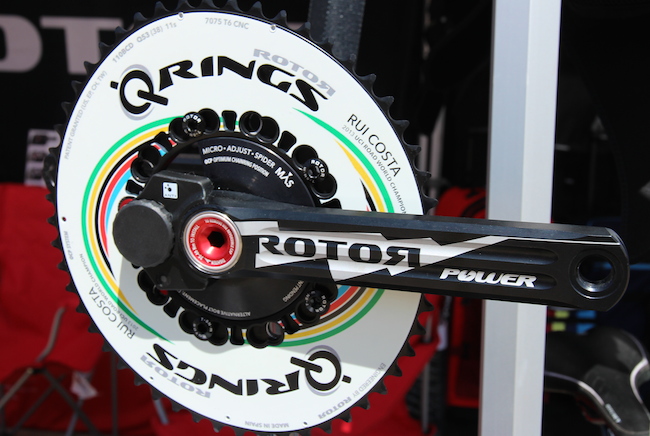 Rotor was at Sea Otter showing off its extensive line of cranks and ovalized Q-Rings. One piece that really stood out among the other great-looking products was a custom crankset that Rotor had made for World Road Race Champion, Rui Costa. No, the custom design will not be available for sale to the public. So if you want it, then you best get started on winning that rainbow jersey! 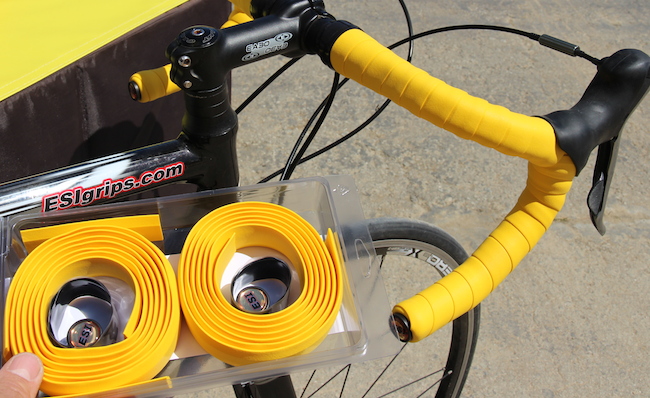 ESI‘s line of mountain bike grips is incredibly popular, thanks to their durability and tacky feel that’s especially popular among racers. Now the company has adapted that same material technology into a handlebar tape for road bikes. Available in 8 colors, the bar tape features mirrored beveled edges and no adhesive, meaning that it is reversible. Once one side gets dirty, simply remove the bar tape, let it hang overnight so it flattens out, and then re-wrap it with the clean side up. One set of bar tape sells for $40 and includes bar-end plugs and silicone strips to hold the tape in place (which also feature a similar material to the tape’s for a consistent texture and feel). 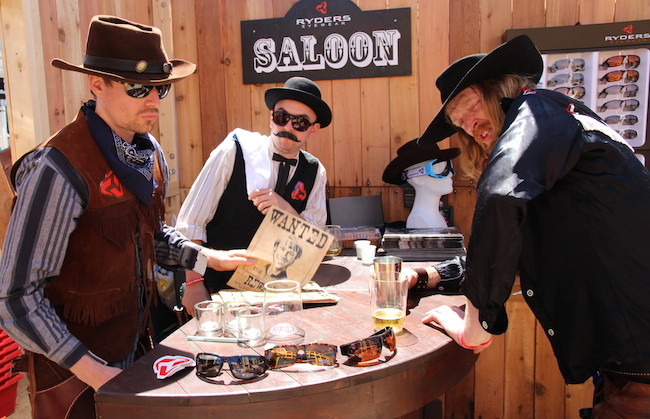 Companies displaying their wares at Sea Otter face plenty of stiff competition for attendees’ attention. Ryders Eyewear is certainly in the running for ‘Most Eye-Catching Booth’ with its full-size Western-style saloon, complete with bar, wanted posters and old-fashioned poker table. Ryders employees even dressed up in Old West garb and not one was seen breaking character when interacting with fans. 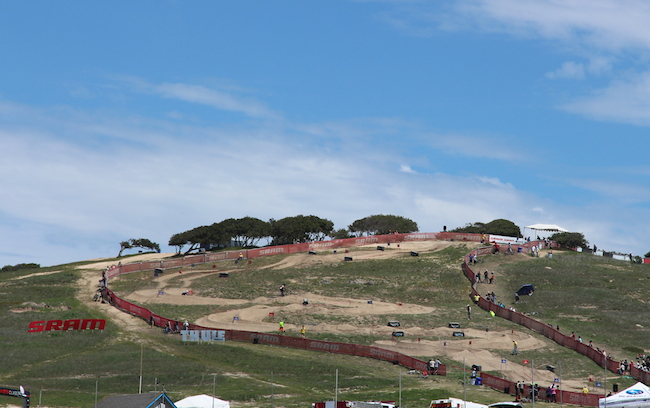 Overlooking the Sea Otter expo area is the mountain bike dual slalom course, which serves as a reminder that the event still places a heavy emphasis on two-wheeled racing of all kinds. Check back soon for more coverage from Sea Otter! And be sure to follow Road Bike Action on FACEBOOK and INSTAGRAM for exclusive photos of new bikes and parts!

2014 Amgen Tour of California – About The Women