Taking a look at the domain of an Italian icon where art, politics and bicycles, meet 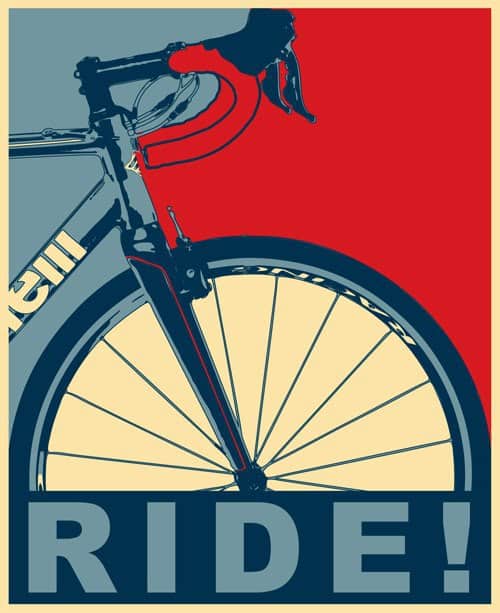 Luckily for the sport of cycling, there are still quite a few “legacy” brands in existence that act as fruitful doorways to the past. And luckier still is that most are found in Italy. Bianchi and Campagnolo are among the better known within contemporary road circles. Cinelli is another. An Italian brand with a vaunted past, Cinelli is a bit off the radar compared to the aforementioned brands. However, with a different mission statement in mind (and a much different CEO), what Cinelli has been able to do better than any other legacy brand is bridge a generational divide of cycling enthusiasts, from dyed in the wool road geeks to millennial mashers on their urban singlespeeds.

Founded in 1948 by former Pro rider Cino Cinelli (winner of Milano-San Remo in 1943), the brand built its reputation on history making road bikes as well as an array of popular products like the famous Cinelli 1a and Alter stems, Unicanitor saddle and cork handlebar tape among many others.

AND THEN ANTONIO STEPPED IN….

In 1978 Antonio Colombo bought the company from Cino. This is the man himself, Antonio Colombo. Raised in a house of steel that was started by his father Angelo Luigi in 1919, Antonio and his family  have been industry mainstays for providing advanced steel tubing for some of the biggest bike brands.   Previous to World War II, Columbus had also become highly successful in providing steel tubing for the modernist furniture world. Into the early 80’s, Antonio would eventually take both his namesake tubing company and Cinelli to even greater heights of popularity.

I first met Antonio Colombo back in the mid-90’s during the heyday of the mountain bike. I’ve been smitten ever since. Antonio is unlike any other industry chieftain I’ve ever met. Not the least bit straight-up or uptight (though I have heard word of his mercurial behavior), Antonio is a man who answers to style and design above all else. He understands what the impact of the bicycle can be on both the individual and society at large. And, he is reluctant to apply any strict interpretation to what a bike, stem or handlebar looks like or how it is designed. In fact, as I followed him through the factory floor, I was reminded of watching scenes from Willy Wonka & The Chocolate Factory where Gene Wilder would traipse along, there, physically among the production machines, but not really there. As with Wilder’s character, in Antonio’s eyes I could sense a level of wonderment and mischief. Antonio is there, but his mind seems somewhere else. Not calculating, but creating. He is answering questions, but still, he seems somewhere else. As much a bike aficionado as the next guy, my impression is that Mr. Colombo is constantly straddling two conflicting worlds; one filled with the banal realities of bike production and the other being a wondrous, non-determinant world of art and design where anything is possible. No matter which world he finds himself, the sport of cycling is indebted for his co-habitation and all that the Columbus and Cinelli brands continue to bring to the sport. 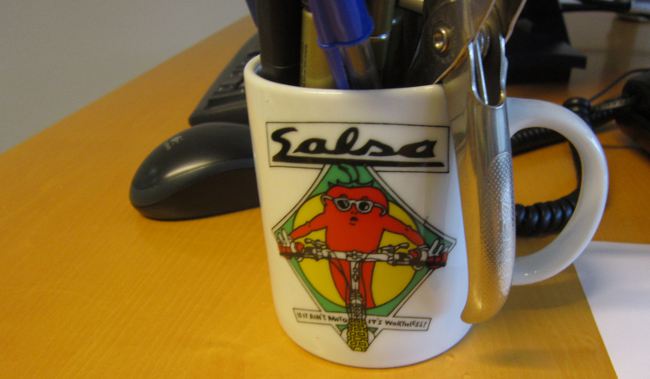 Despite his Italian road roots, Antonio has always been drawn to American cycling culture and was close with many of the pioneer mountain bike designers, like Ross Shafer and Salsa Cycles. 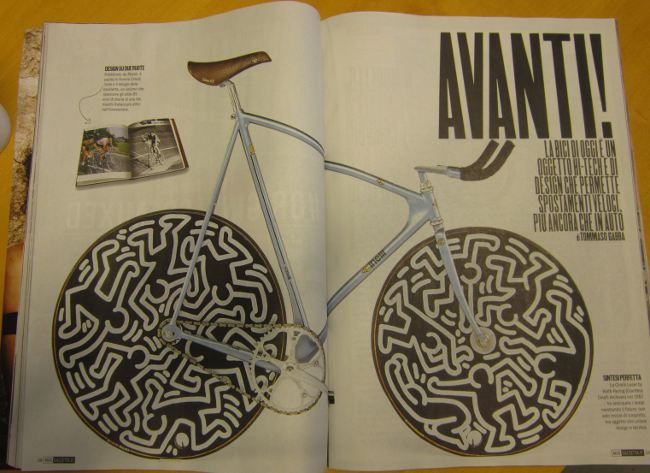 To the untrained eye, this is just a funny looking bike with funny looking wheels. However, the Laser pursuit frame with hand painted wheels by Keith Haring (circa 1987) probably makes this bike one of the most valuable in the world today. 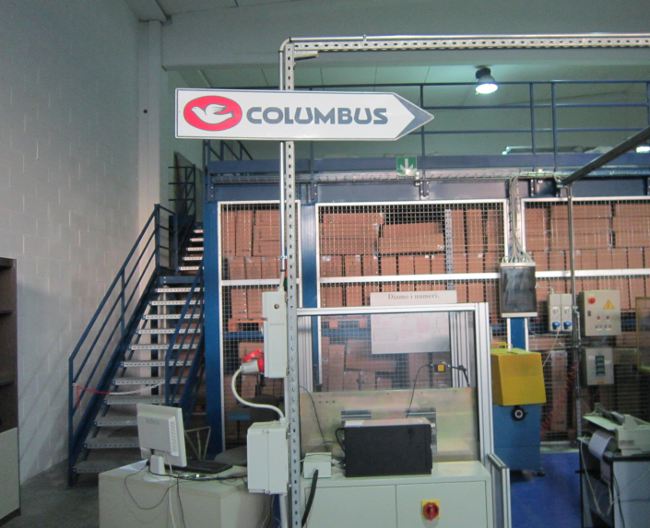 This way to the factory floor where you’ll find that steel is indeed still real.

As renowned as Columbus is for their steel frame tubing, they have always been equally innovative with aluminum products as well. 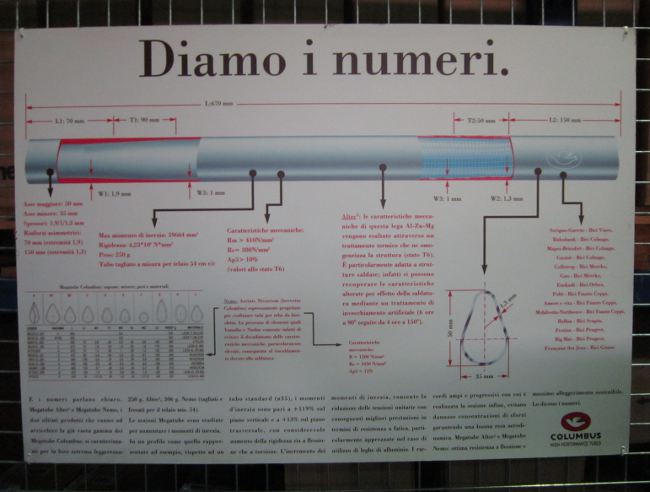 Here’s a trusty diagram that makes the point about how much work goes into the Columbus tubes.

If only these carts could talk, think of the tales they could tell of being part of the manufacturing process for some great steel frames through history. 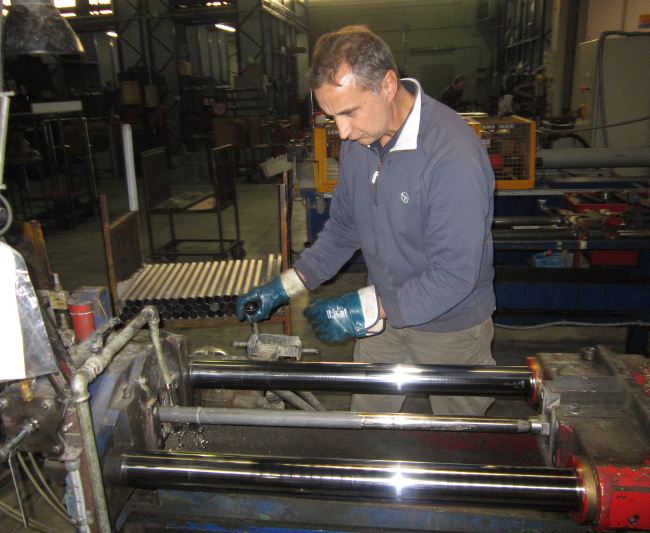 Some of the machines drawing the steel tubes in the Columbus factory have been in operation for decades. 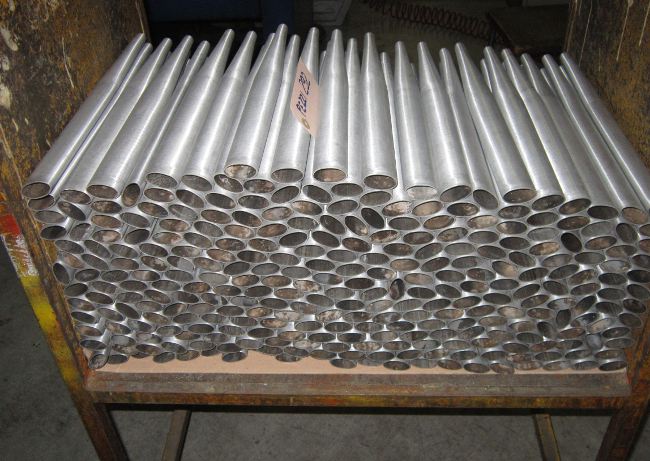 For many new cyclists who only know carbon fiber, this is what steel looks like.

“My obsession was always art and design. And that was a very big challenge, to introduce design into an arena of industrial tubing. But it was something we were able to do, with over-sized tubing,with elliptical shapes.” 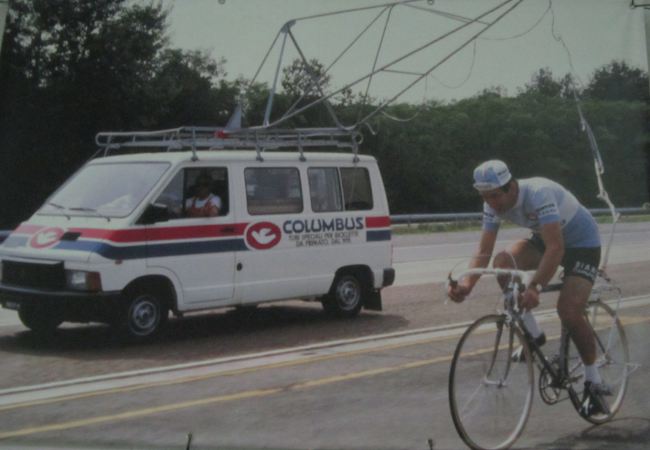 Real world research and development as only the Italians could be capable of! 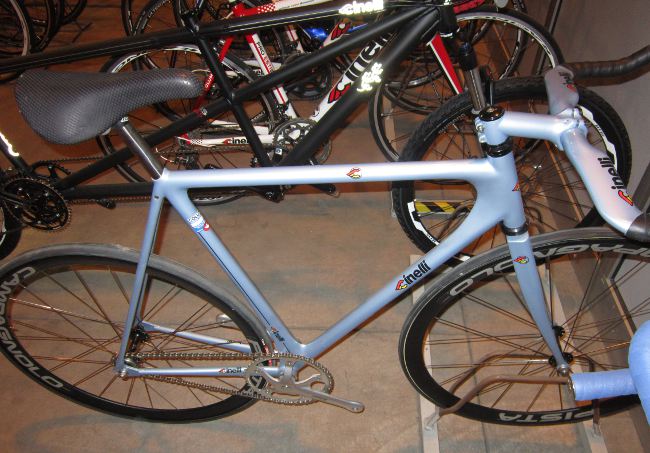 Although the Keith Haring Laser is the most recognized, there were actually a handful of different models, each of them revolutionary in their own right. The first was a standard road bike which was eventually joined by a track bike and then the pursuit bike. 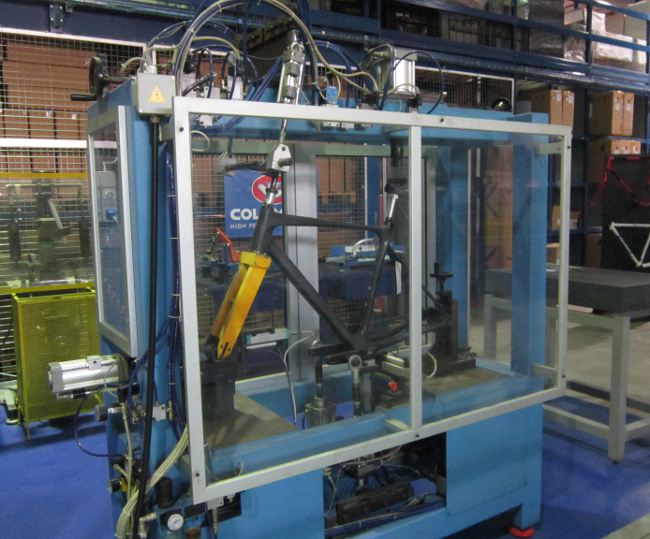 As well as the manufacturing taking place, there is also plenty of frame R&D to be found. 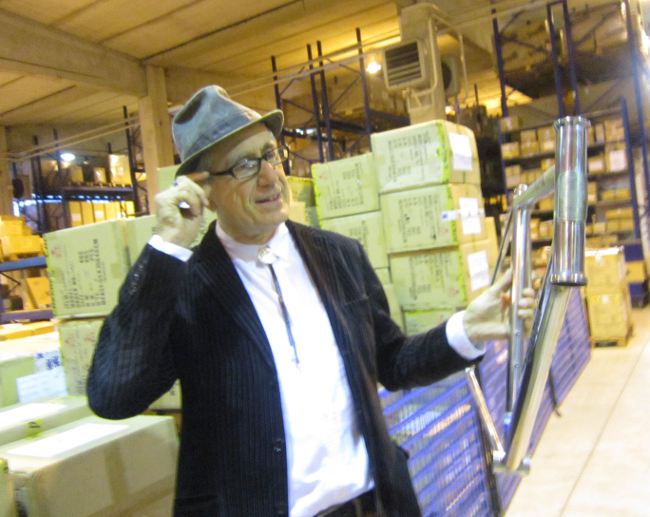 Antonio holds up one of his beautiful XCr stainless steel frames.

“I came to bicycles from a more social point of view. I was not a racer…but I always felt there was so much to the bicycle that could be transformed into design and fashion, and that’s what inspired me to work toward that. And somehow, thinking about how a bicycle can be a design object and a fashionable object and an art object, I transformed what I had in my hands – Columbus Tubing and Cinelli.” 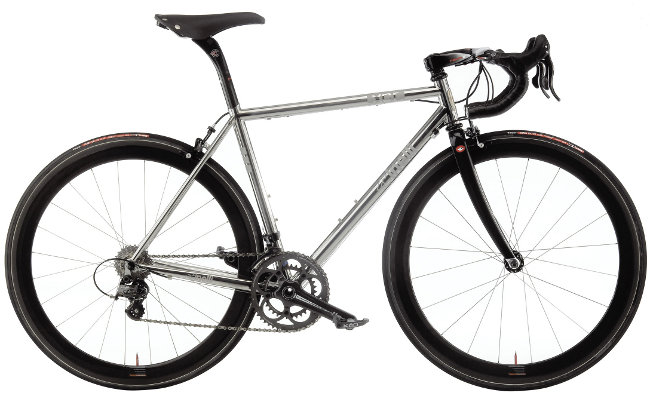 The XCr frame is made in Italy and with a Columbus carbon fork sells for $4600. Custom geometry is also available. 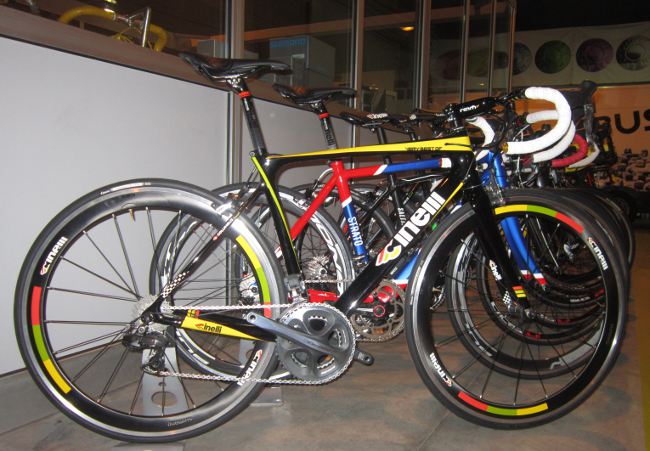 The Cinelli line includes road, ‘cross, urban and TT bikes. Not all the bikes that are available in Italy are brought into the states. 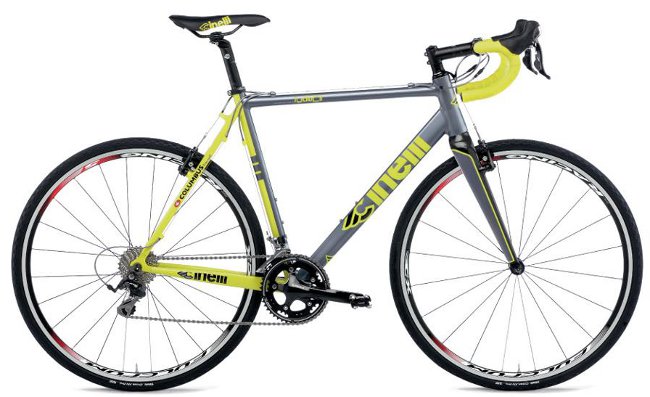 The Zydeco ‘cross bike is made with triple butted Columbus Zonal aluminum tubing and is outfitted with a mix of Cinelli parts, a Shimano drivetrain and Fulcrum wheels. The frame & fork sells for $799 while the complete bike sells for $2150. Go to Cinelli Bikes. 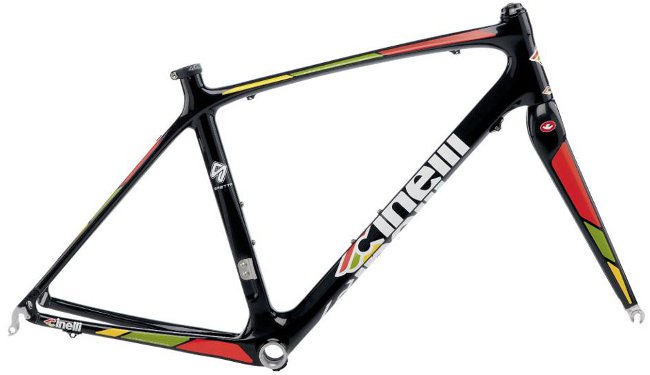 Cinelli bikes always stand out from the crowd due to their infusion of style and design that has remained a priority of Antonio’s through his entire career. 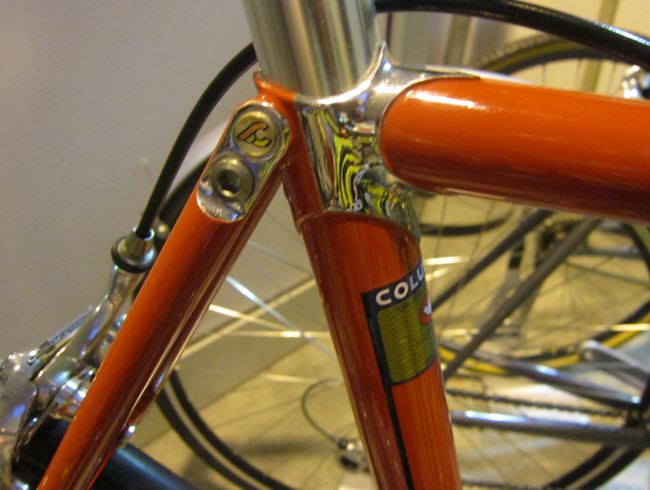 Seat binders are rarely given much thought or appreciation. That does not hold true for the classic Cinelli lugged seat binder that was used on the SuperCorsa. 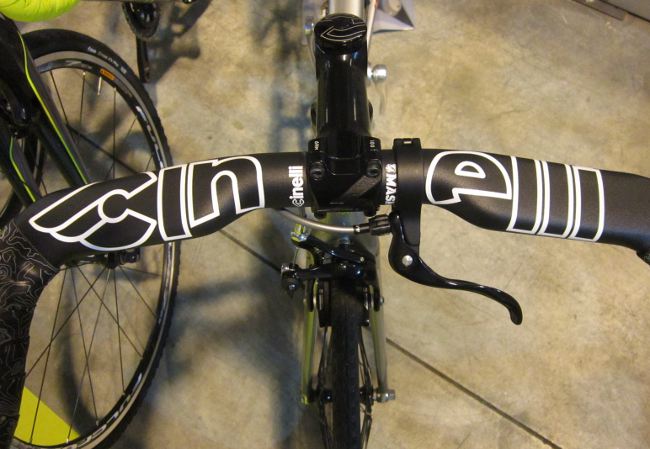 Cinelli continues to produce a wide variety of handlebars and stems, most that have have new-found favor with the urban mashers. The Mash Bullhorn sells for $125. 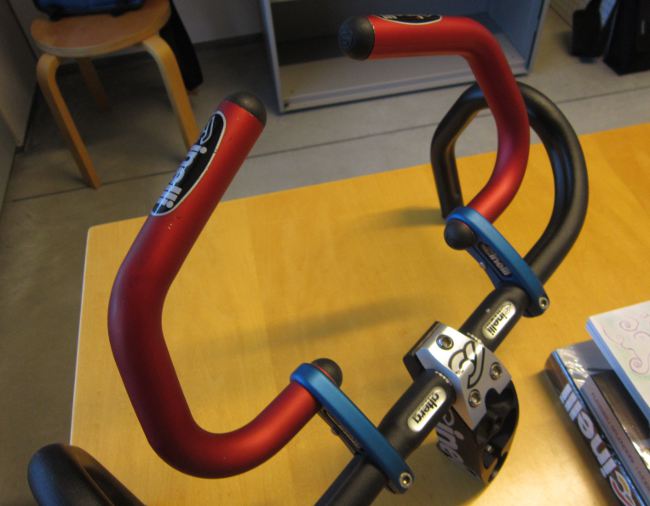 And then on October 26, 1997 the UCI banned them. It didn’t sit too well with Antonio and he did his best to fight the ban with a guerrilla campaign. In the end, Spinaci remained an outlawed product. 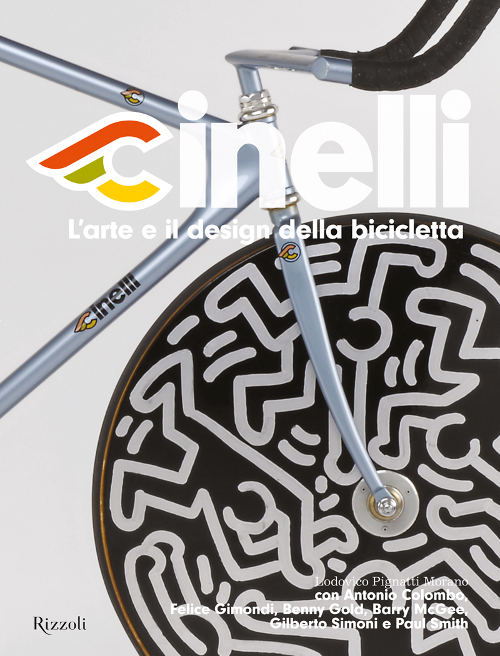 One of the best cycling books we’ve seen in quite some time. The Cinelli book is full of 280 pages that tell of the grand Italian marque’s rich history along with fantastic photos and entertaining first hand accounts. A must read for all cycling buffs. 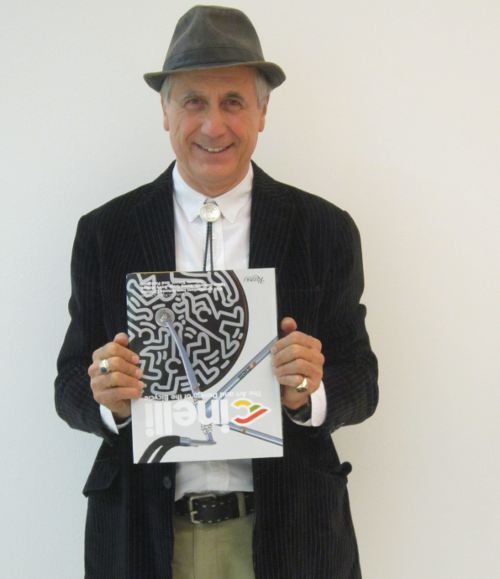 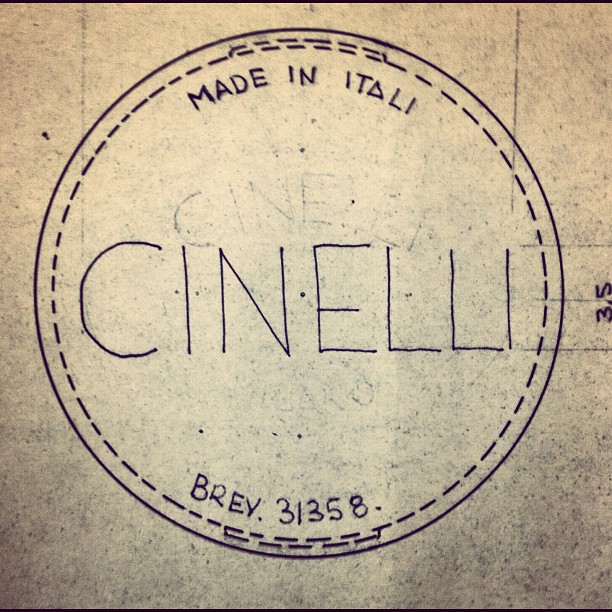