THROWBACK THURSDAY, 2011: INSIDE THE HALLOWED GROUND OF MADONNA DEL GHISALLO 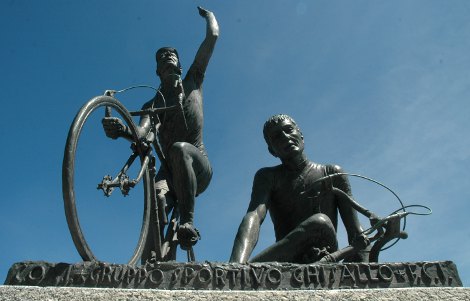 Of all the famous hilltops in the world of cycling (Ventoux, Alpe d’Huez, Gavia) the shy, rather unassuming partition that overlooks Lake Como is perhaps the most hallowed of all. This is the location where you’ll find two places that every cyclist should visit in their lifetime: the Madonna del Ghisallo chapel and the Museo del Ciclismo. One is old, one is new, both (plus the view) are simply mind blowing to witness.

Built in 2006, almost every aspect of the museum is representative of some aspect of cycling. From a wooden velodrome structure that houses a variety of bikes to the hairpin turn in the walkway leading to the museum floor which acts a model of the final stretch of the final stint of the Ghisallo climb – it’s ALL about cycling. 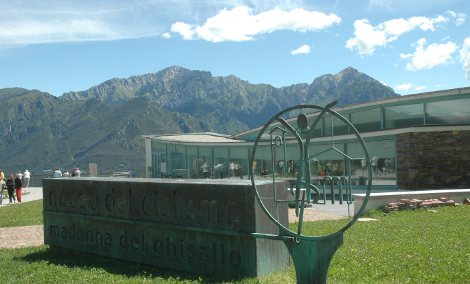 What better place to locate a cycling museum than on a mountain top overlooking Lake Como and Dolomites? 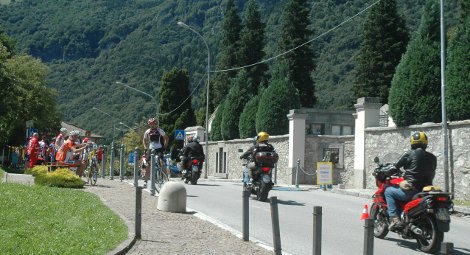 On any Sunday the road to the museum and chapel is overflowing with cyclists and motorcyclists. The road has also used for a stages in the Giro d’Italia and the Giro d’ Lombardia. 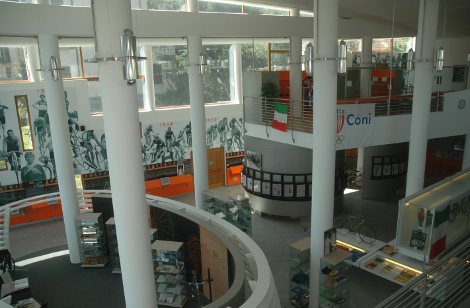 As soon as you walk indoors, you’ll find a spacious museum chock full of all kinds of cycling memorabilia. It is a true delight to the eyes of any cycling enthusiast. This is the view looking towards the rear of the building. 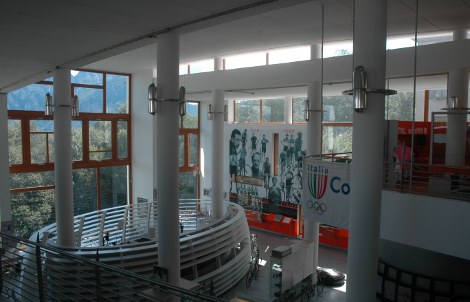 And a view looking out towards the front of the building. 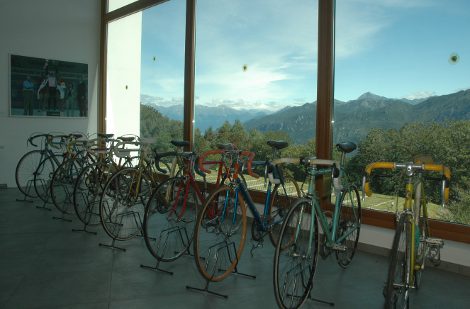 Don’t you wish you had a room with this view in your house? 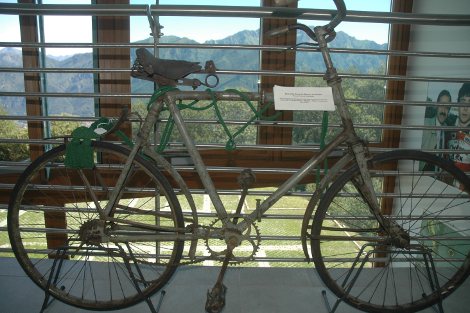 Here is a folding bike built by Edoardo Bianchi back in WW1. 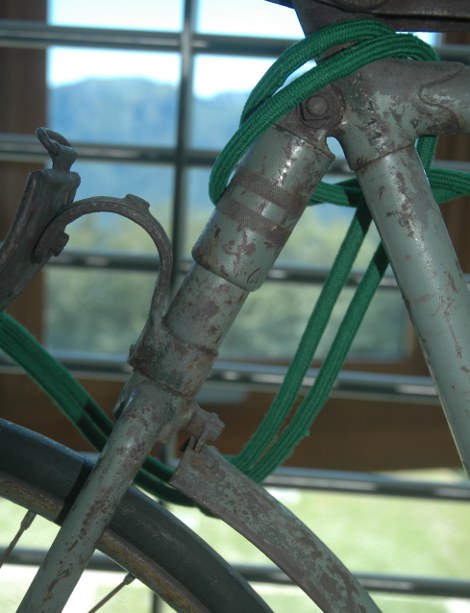 Moots, Ritchey and Scott were just three modern day mountain bikes (in the ’90’s) that used a similar suspension system has found on a bike made back in early century. 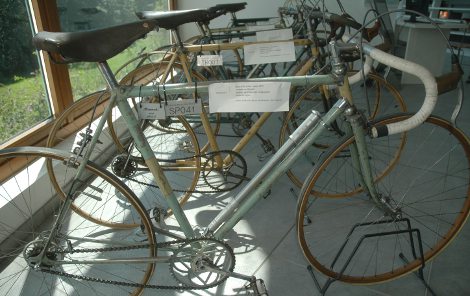 Everywhere you look, there are classic old bikes ready to enjoy your close-up look. 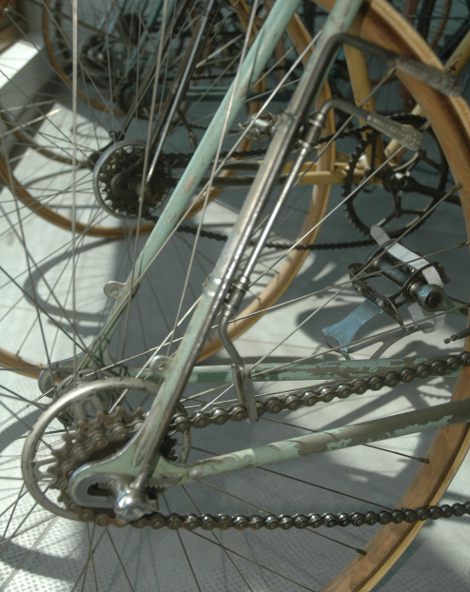 In 1946 Campagnolo introduced the Cambio Corsa due lever rear shifter.  A later model would use the same system but with a single lever to get the shift.

Needing to keep the axle in place, the shift system required some heavily serrated dropouts. 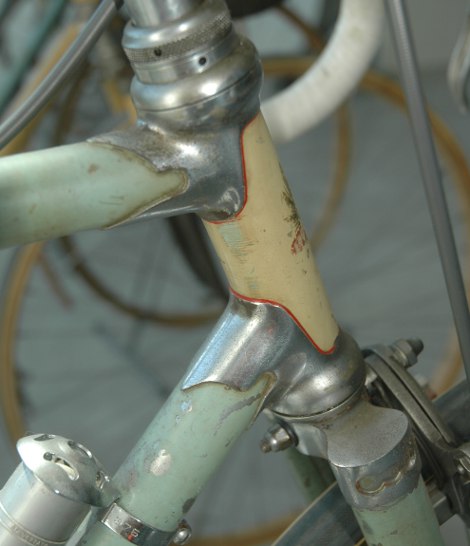 Now this is what you would call old fashioned Italian craftsmanship. 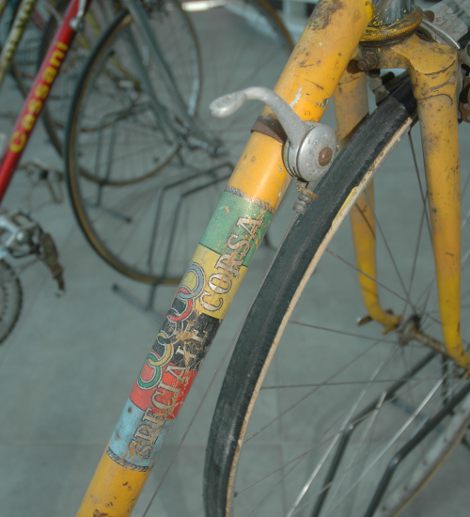 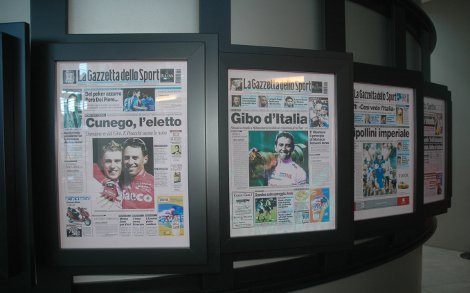 As you might expect, there is a full display of old Gazzeta della Sport newspapers on hand to help provide some of the racing history. 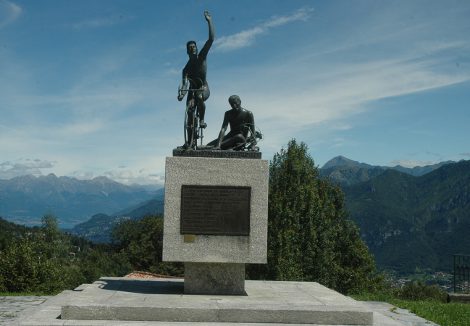 Here’s the complete statute that separates the two buildings. 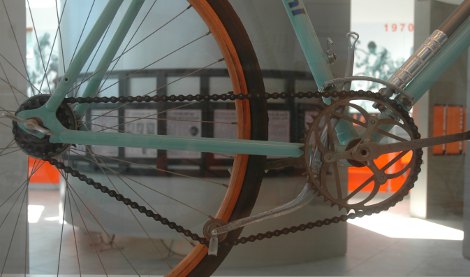 How about this drivetrain found on a 1920 Bianchi? 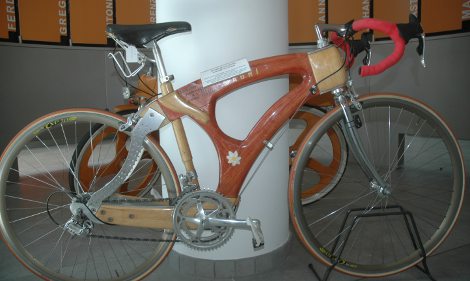 Amid all the sleek race bikes were a few that stood out for just the opposite reason. 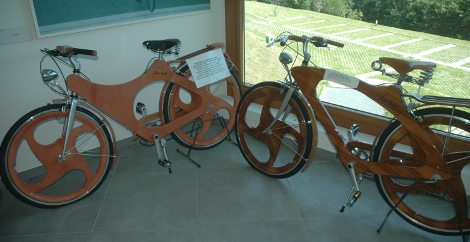 Wood, it’s not just for park benches and patios anymore!

JUST THE SHAPE OF BEAUTIFUL PARTS 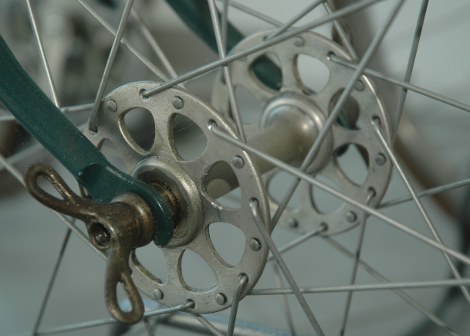 Few things are as attractive to the eye as a high flange hub. 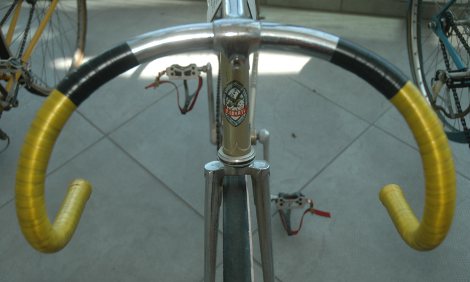 It’s hard to find a pair of modern handlebars that enjoy the simple, graceful arc of these early track bars. 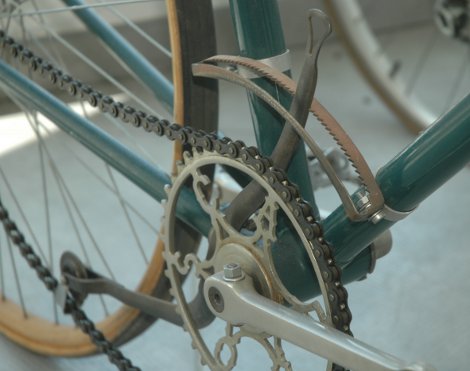 A precursor to electronic shifting with a beautifully machined chainring spider. 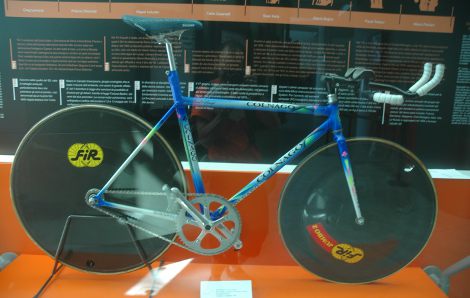 Not all the bikes were of the WWII era – here’s a simple looking Colnago track bike. Look for more Colnago bikes in our report from the Colnago museum soon. 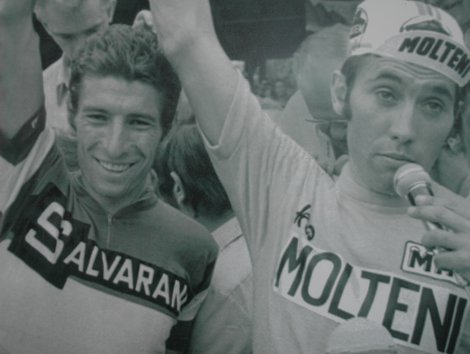 The museum is chock full of great old photographs…as with this shot of two greats from two countries: Italy’s Felice Gimondi and Belgium’s Eddy Merckx.

This is Eddy’s race winning bike from the 1973 Tour of Lombardy. 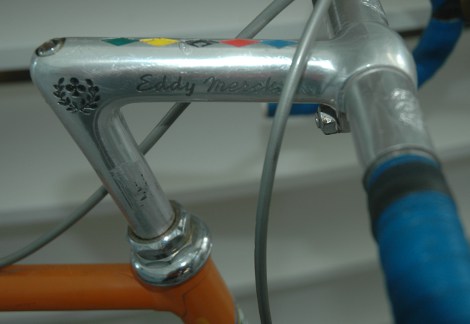 How sweet is the stem? Rainbow accents, the Colnago “Ace of Flowers” and the big guys signature. 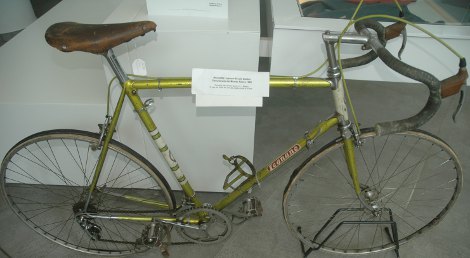 The 1958 Legnano ridden by Ercole Baldini at the World Championships. Like many other brands lost to the history books, Legnano Bicycles has rich legacy full of world championship wins and political intrigue. 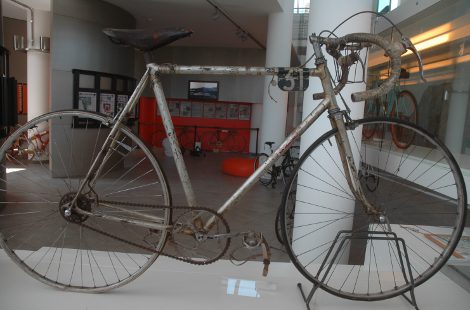 Not in as good of shape as when he rode it to win the 1948 Tour de France, this is the Legnano ridden by Gino Bartali that features the Campagnolo Cambio Corsa due lever rear shifter.

AS FOR THE MADONNA DEL GHISALLO… 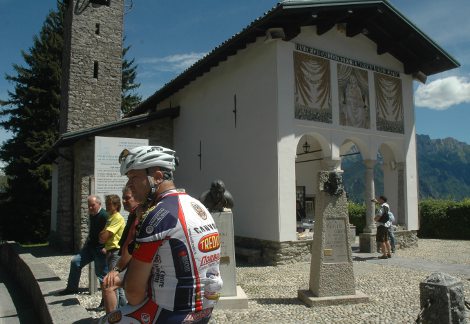 The 17th century building has as its centerpiece a portrait of the Blessed Virgin Mary known as the Madonna and it was she who was officially d the patroness of cycling by an official Papal decree in 1949. Inside there are numerous old bikes and memorials to fallen cyclists, plus an eternal flame that was lit and blessed by Pope Pius XII.

For anyone making the trk to Ghisallo, be sure to have lunch or dinner following your visit at Polenteca Chalet Gabrielle. Located at an even higher mountain locale, the two story restaurant offers up a great view and a serious variety of polenta dishes. The Gabrielle has been serving up the distinct local fare (polenta) since 1957. 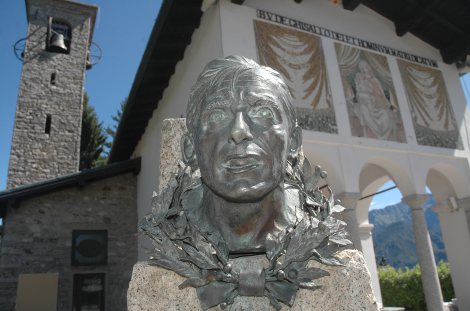 A bronze bust of Italian great Fausto Coppi watches over the entrance to the chapel. 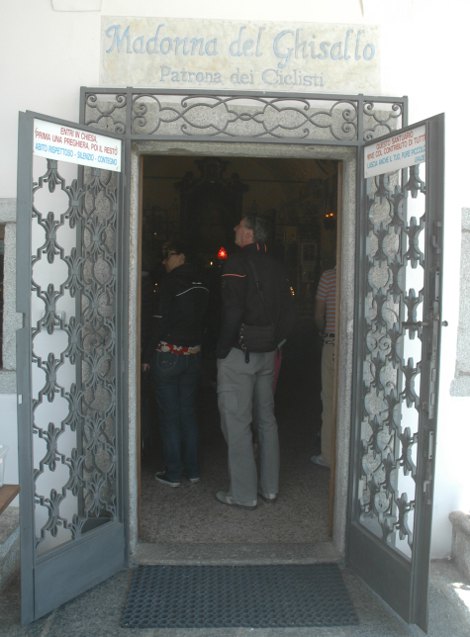 The small chapel gets filled up pretty quickly. 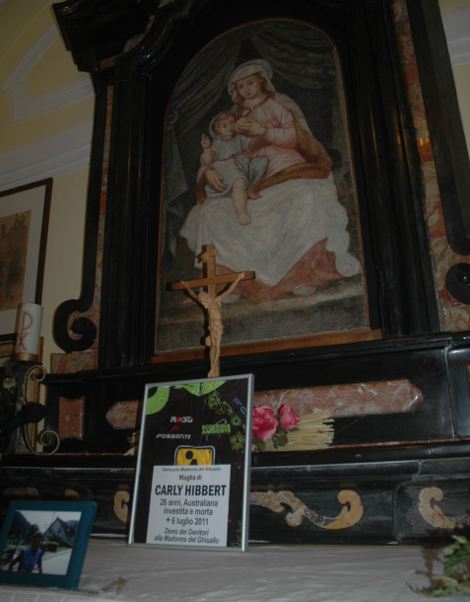 There was a small memorial inside dedicated to Australian racer Carly Hibberd who was struck by a car while out on a local training ride in July.