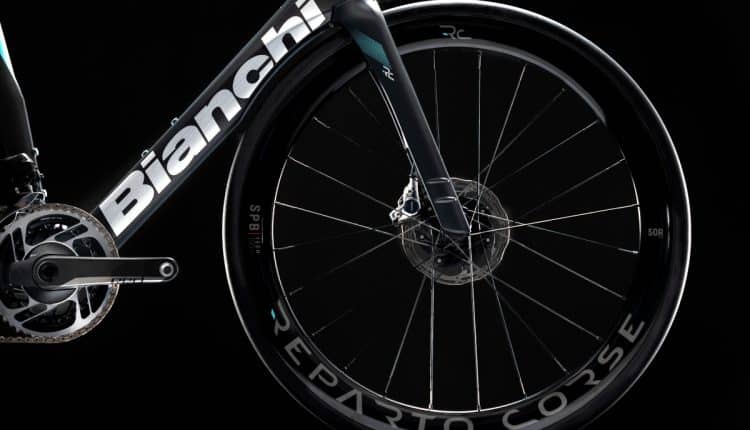 As we say with most things that pertain to giant leaps in style and performance – “leave it to the Italians!” And so it is that for 2023 Bianchi has completely re-designed their Oltre aero road bikes from the ground up. In doing so the legendary Italian marque from Milano has brought some unique and very distinctive aero elements to the pedal game – not at all unlike the effort that their Ducati counterparts in Bologna have done by elevating the aero game in the realm of  MotoGP racing.

Whereas Ducati’s efforts are directed more at creating downforce for their 200+ mph steeds, Bianchi has introduced some clever design ideas to enhance their bikes aero flow. New to the Bianchi line is also their re-establishing the legacy of the famed Reparto Corse shop where many of the brand’s most important race winning bikes were built and developed.

Take a walk through the Bianchi’s old Reparto Corse here. 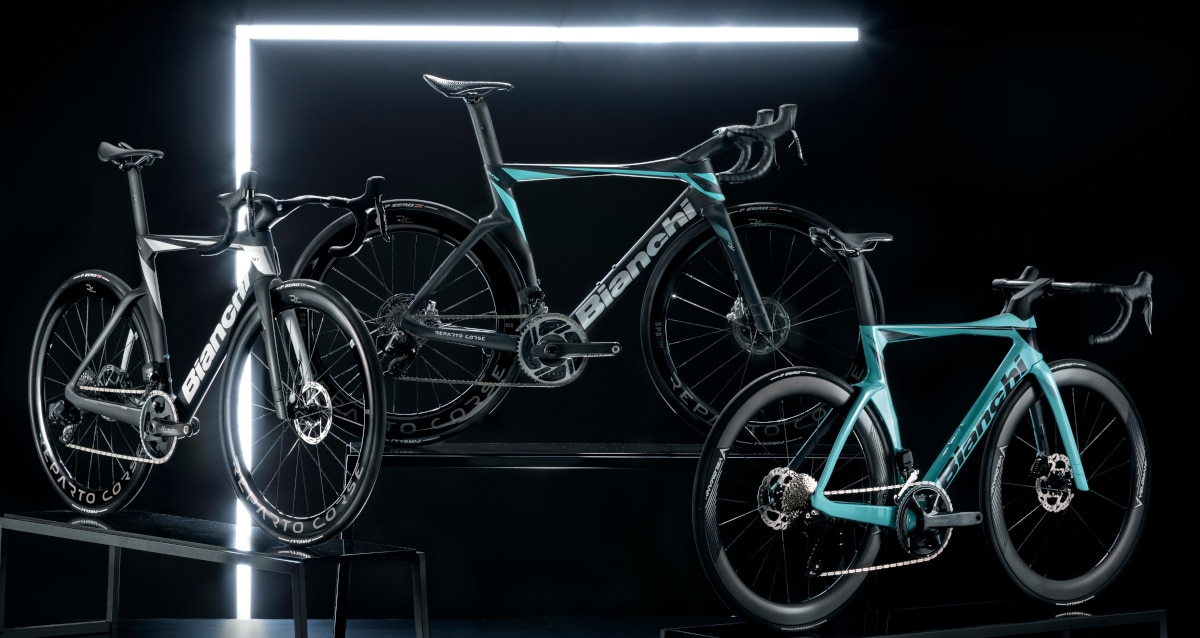 Aerovolution is now. Bianchi has rewritten the concept of a high-performance aerodynamic bicycle with the launch of the Oltre platform, led by the Oltre RC hyperbike and complemented by the Oltre Pro and Oltre models.
Born from Bianchi Reparto Corse’s research and development, the Oltre RC is a revolution in terms of design and engineering with an aim to actively dominate and exploit airflow through engineering a perfectly integrated bike-athlete and frame-component system. Oltre is a revolutionary design thinking approach defined by the introduction of Bianchi Air Deflector technology. 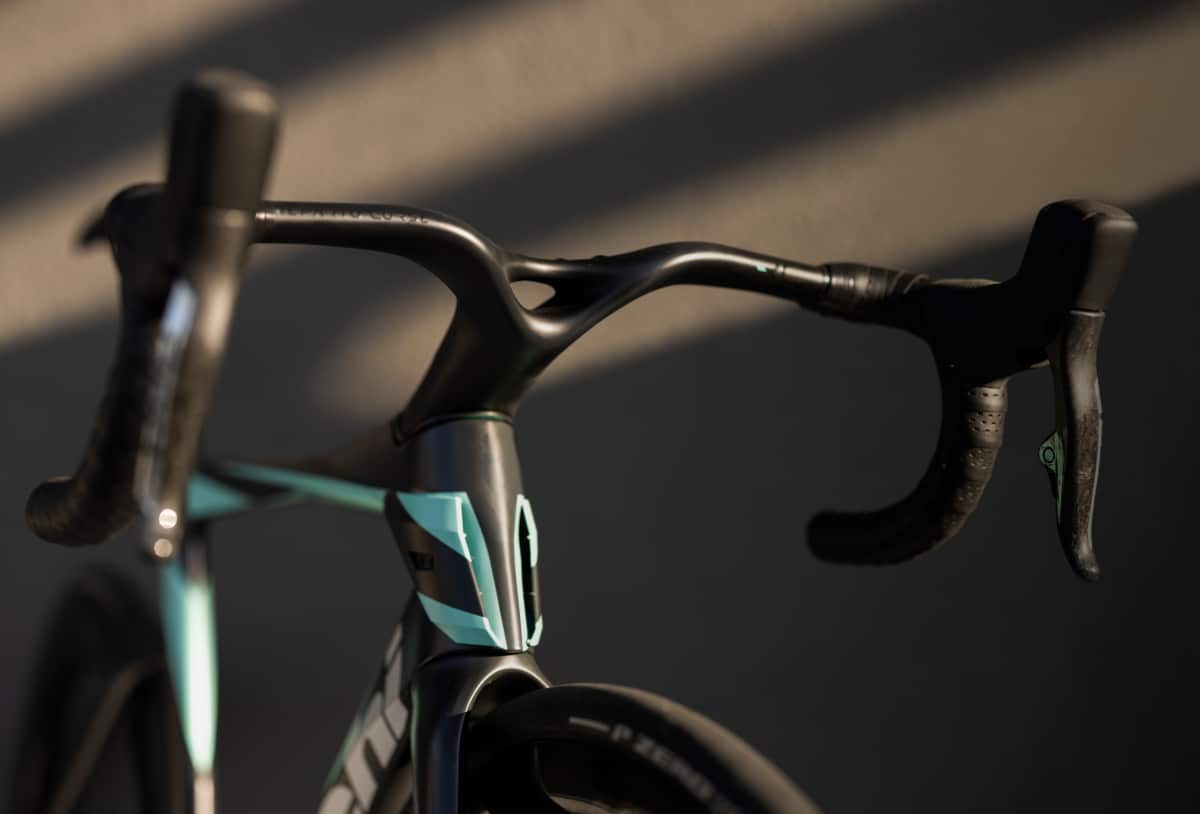 Bianchi designed and integrated Air Deflectors (patent pending) into the sides of the head tube, thus channeling airflow and creating a low-pressure zone at the rear of the tube. The action of the deflectors complements the performance of the new aero cockpit, which generates low-pressure air vortices directed toward the legs of the moving athlete through a centrally located hole. The result is a significant reduction in aerodynamic resistance by the athlete-bike system, as certified by wind tunnel testing. In short, results proved higher speed with less effort. 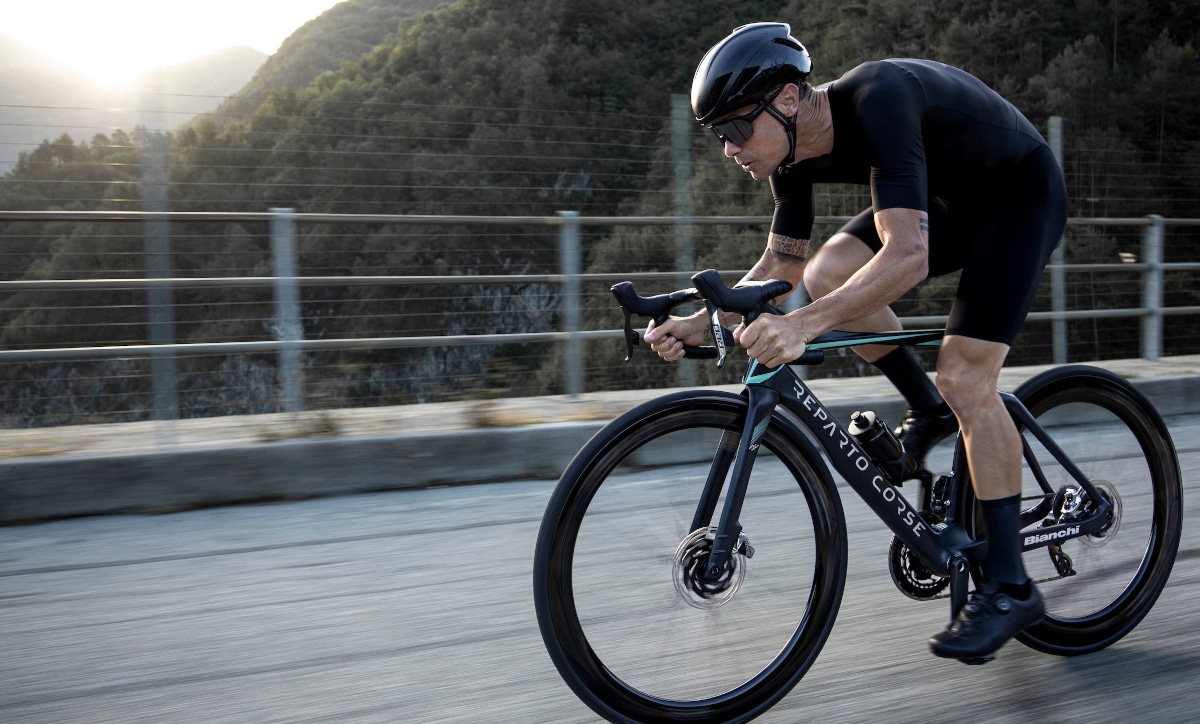 Compared to the previous Oltre XR4 model, the Oltre RC saves 17 watts at a speed of 50 km/h and gains 45 seconds over a distance of 40km with a power output of 250 watts/h. In variable wind conditions, the advantage over the best aero bikes on the market increases by 30 percent, ensuring extreme performance even during sudden changes in wind direction. 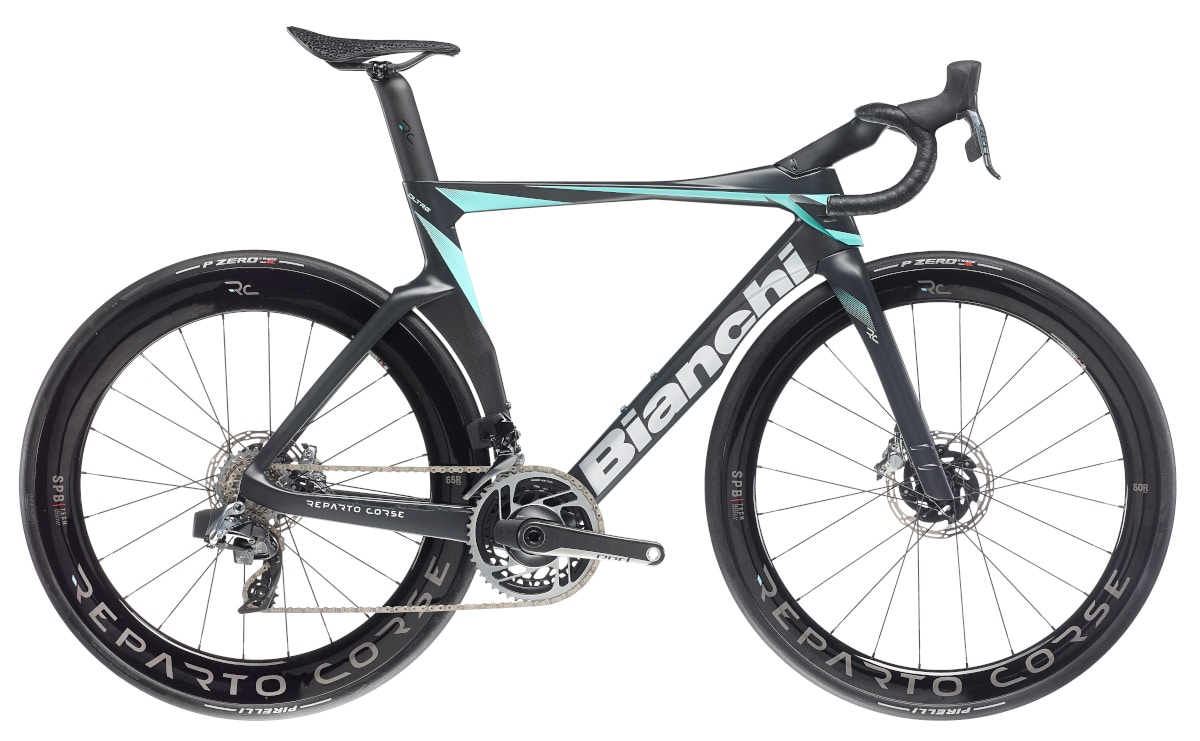 The new top-of-the-range model in Bianchi’s aero racing collection, the Oltre RC has been designed for the most extreme athletes looking for maximum speed. The Oltre RC introduces the hyperbike concept. Created for World Tour racing and professionals, the Oltre RC dominates airflow, thus reducing aerodynamic resistance and increasing the speed of the overall bikeathlete system. This is achieved thanks to the unique “Air Deflector” technology that acts in conjunction with the new aero handlebar to deliver unprecedented performance.

The Oltre RC is equipped with the new RC50 SPB Tech and RC65 SPBTech tubeless ready wheels (50mm front profile and 65mm rear profile) and features the RC139 Carbon air saddle (with 3D technology). These high-performance components have been designed and produced by Bianchi Reparto Corse. 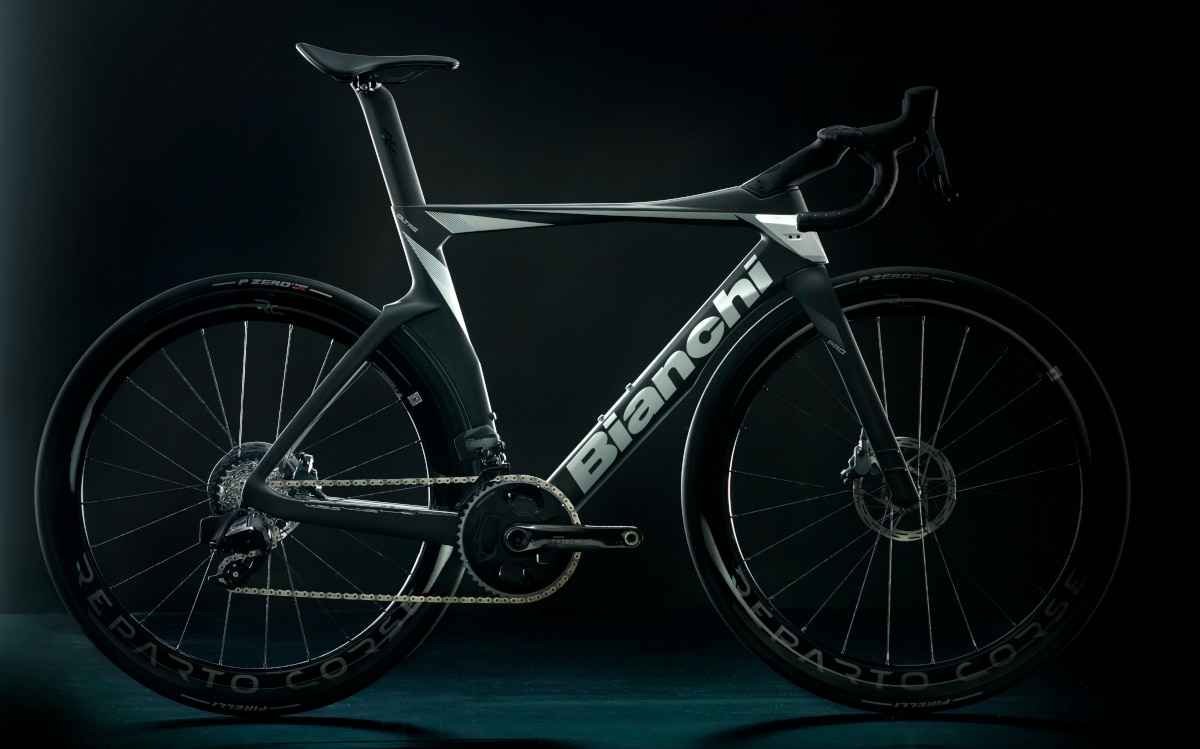 The Oltre Pro shares the same construction principles as the top-of-the-line RC model and features Air Deflector technology and a new aero handlebar. The frame incorporates the Bianchi CV vibration cancellation system into the carbon fiber, which increases riding comfort for a less extreme rider. 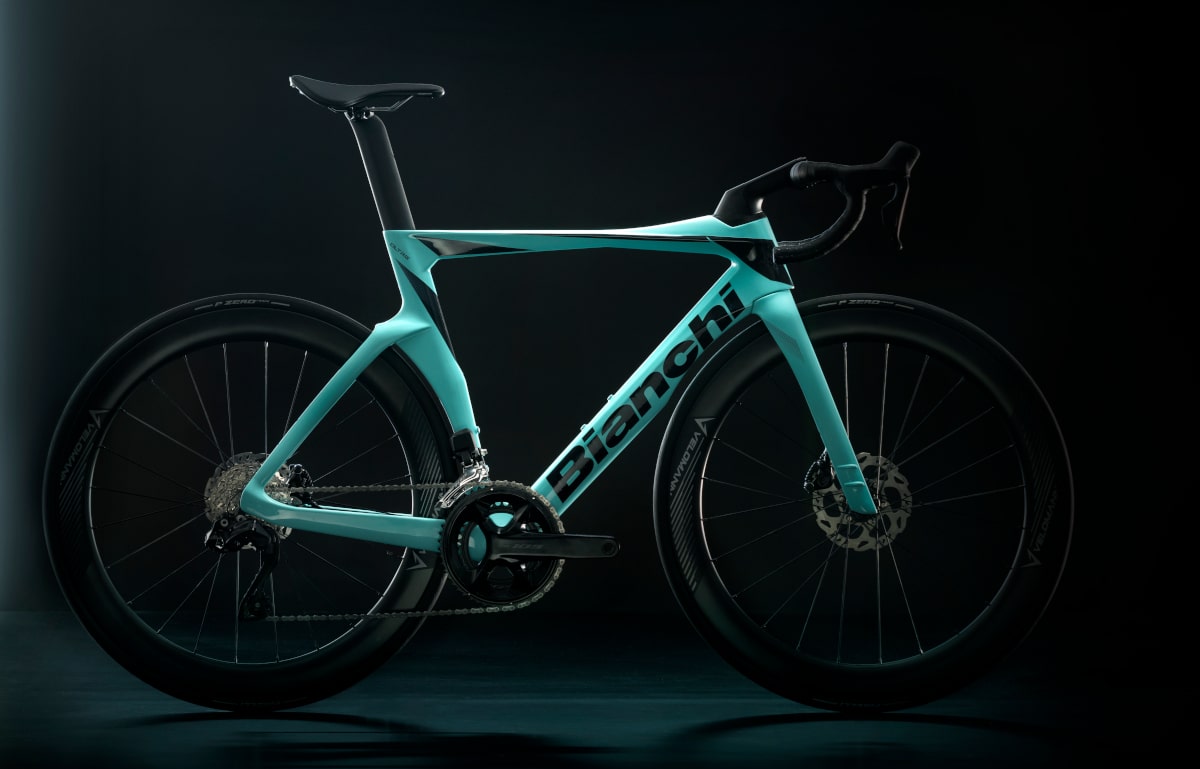 The Oltre represents the gateway to Bianchi’s fledgling aero collection. Derived from the superior Pro and RC versions, the Oltre model is designed for a wider range of cyclists who also seek the thrill of speed. The Oltre’s full carbon frame and fork provide high performance in terms of stiffness and responsiveness. 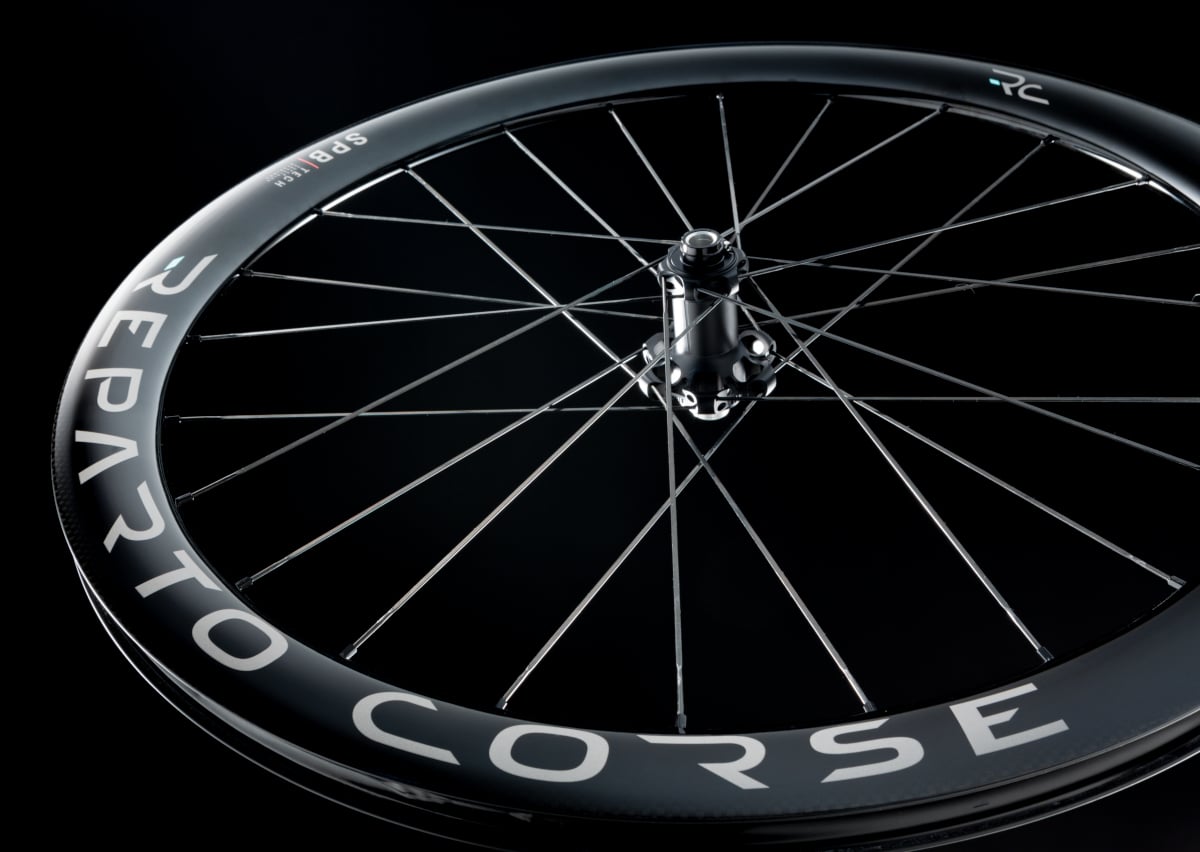 Every detail of the Oltre RC’s frame/component system has been studied by Reparto Corse to achieve the highest level of performance. It is obsessive research that led Bianchi to design and produce exclusive components
engineered by a dedicated team of experts.

The pair of Reparto Corse RC50 and RC65 tubeless ready wheels were developed with four guidelines: stiffness, smoothness, weight, and design. The new wheels, which feature a 3K carbon finish, are stiff, super-responsive and
weigh 1540 grams (per set) while smooth performance is guaranteed by SPB Tech | Super Precision Bearings Technology. 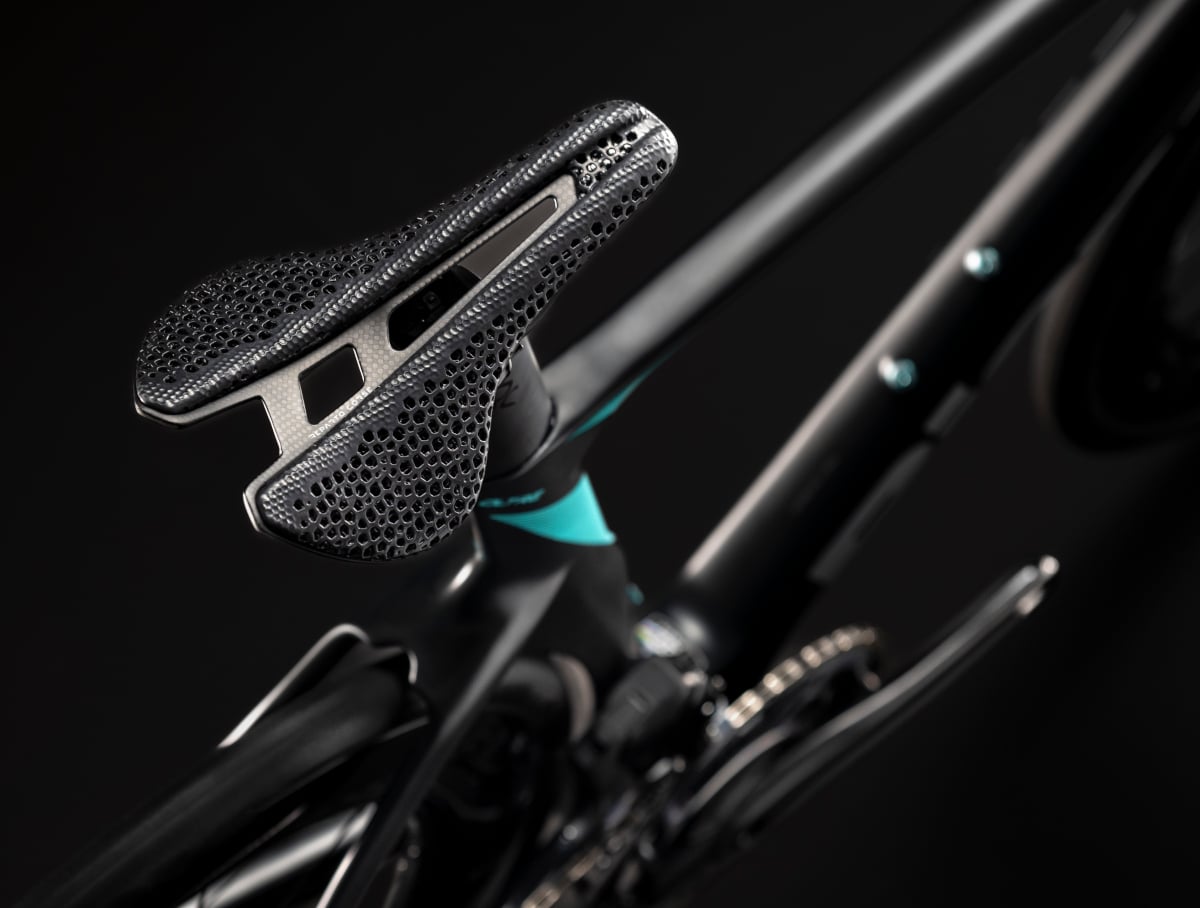 In addition to the wheels, the RC139 carbon air saddle features a pad developed with 3D technology, and a weight of just 168 grams, which allows the athlete to maintain an aerodynamic position even over long distances without
sacrificing the best ergonomics.