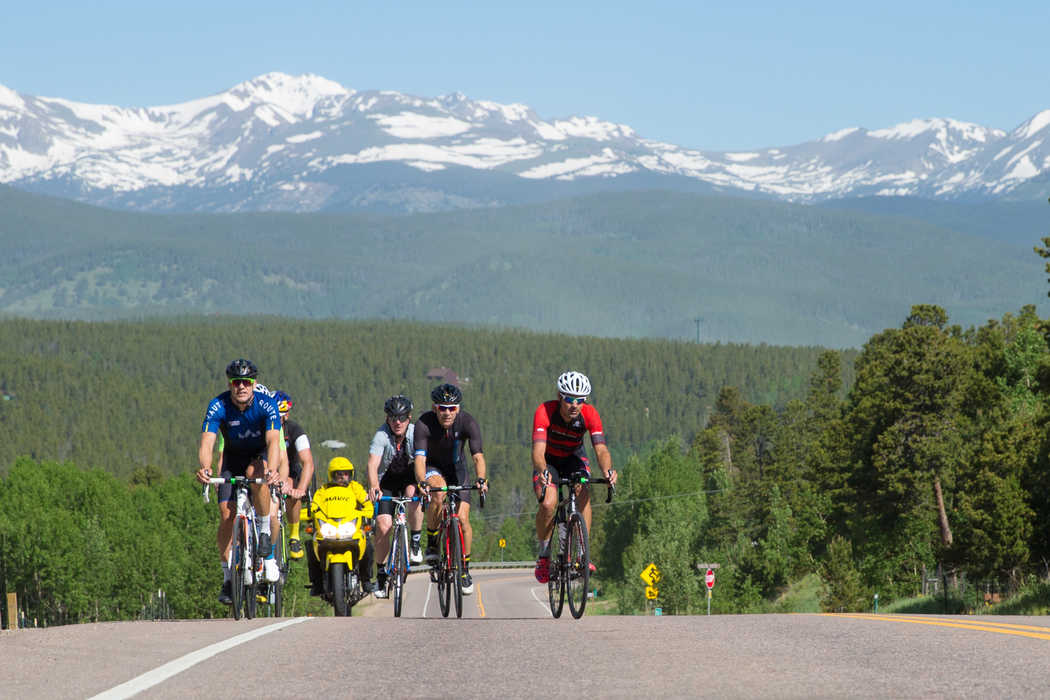 Sprinting over the top of a 12,000 foot pass is an interesting feeling. It’s part euphoric, part nauseous, mixed with a touch of lunacy. High altitude does some funny things to your brain, especially when the altitude is combined with repeated anaerobic efforts and you don’t know if you should pass out or ride even harder. That’s pretty much how I felt at least once everyday for seven days straight during the Mavic Haute Route Rockies test event that took us over some of the highest mountain passes in the country and included 550 miles and 52,000 of climbing. For the dozen or so of us that were chosen to be part of a test event one year prior to the inaugural Haute Route Rockies, we got a unique look at the entire course and the challenges that come from the massive amount of climbing combined with the altitude.  It was an incredible week of playing pro racer, just without the worry of having to secure next year’s team contract.

Haute Route Rockies will officially debut in June 2017 with 600 riders from all over the globe racing, or simply riding, 7 timed stages through the Rocky Mountains. This is the closest thing most of us will ever get to racing a pro-level stage race, and that’s been the huge draw to other Haute Route events in the Alps, Pyrenees and Dolomites since the first event back in 2011. Think of Haute Route as a combination between a major professional stage race and a Gran Fondo. What you come up with is an epically challenging, multi-day timed event where every detail is taken care of. Mavic’s famous yellow cars and motorcycles handle mechanical support on and off the course, feed zones are fully stocked with everything you might need to complete the day, and once off the bike, there’s a post-event meal and massage. It’s like being a pro but only better because you can choose to challenge yourself and race each day in search of the overall win, or just take in the sights and enjoy each stage.

The Haute Route organizers have a lot of experience putting on European events, but since this would be their first foray into the American market they brought on Chandler Smith, a Colorado local and long-time event director for Ride The Rockies. Chandler’s route knowledge and relationships with some of the host cities was the last piece missing for Haute Route to offer their first event outside of Europe. Smith helped put together routes that take in some of the best terrain Colorado has to offer, with much of it having been used previously in the U.S. Pro Challenge race. And much to my delight, approximately 70 miles of dirt roads are part of the route.

The dirt was added for a couple of reasons, one was that it gets the riders off sections of roads that could have heavier vehicle traffic; and since the roads will only be closed to traffic for a short time after the start, the dirt offered a safer and more pleasant riding experience. The other reason is that riding dirt roads is just part of the cycling culture in Colorado since the majority of the dirt roads are extremely smooth and fast because they’ve been treated with magnesium chloride that practically turns them into pavement. I personally rode Mavic 28mm tires for the entire week, but a 25mm tire would be sufficient for the course. Our group consisted of some Europeans who had zero dirt riding experience, but it didn’t pose a problem for anyone, and I don’t think anyone even had a single flat tire on any of the unpaved sections.

Boulder was chosen as the grand depart, and considering it’s home to numerous industry companies, half of the U.S. cycling media, and a large number of pro riders, we couldn’t think of a better place to kick the week off. Knowing that many riders coming in for the event would not be used to the altitude, Smith made Stage 1 about as “gentle” as you’re going to get for the week. And when I say gentle, what I mean is it’s not triple digit miles and has fewer than 10,000 feet of climbing. Not exactly a coffee ride by any measure. Either way, it’s a challenge but not over the top in difficulty, and because it’s a loop that starts and finishes in Boulder, you’re in the same hotel for multiple nights. Once finishing the stage we went straight to the creek for some cold water therapy before grabbing a bite to eat at the downtown Farmer’s Market. Haute Route did ask us to not post the exact stage routes and specific stage details until all the permits had been issued for the routes.

As a sea-level dweller, the altitude was a slight cause for concern considering I was off the plane and onto the bike hitting the biggest week I’ve done in over five years. Not to mention the fact that Mavic ambassadors and former pro riders Tim Johnson and Janel Holcombe are always up for ripping the legs off some media folks. Over the next couple of days I took care of myself and tried to be smart with how deep I went with efforts and always making sure to stay on top of hydration and constantly eating while on the bike. We would typically have three or four CTS feed zones per day (which will be the same for the event next year), making it easy to stay on top of nutritional needs without having to start out in the morning with bulging pockets overstuffed with food.

Nearly every day we rode climbs that seemingly had no end, like the kind that are 20 miles long, and over the course of the week we went above treeline on a few occasions. I kept thinking that the organizers had stacked the most scenic days early, then later in the week things might not be quite so photogenic, yet that never happened. From day one in Boulder until finishing in Colorado Springs through the Garden of the Gods National Park, every day was full of challenge and beauty. One of the best parts is that up until the final day there is not a single transfer, you simply start where you finished the day before.

HAUTE ROUTE ROCKIES PACKAGE
Getting one of the 600 spots for the 2017 Mavic Haute Route Rockies will cost $2,200 as of the posting of this. Lodging is an additional cost and can be booked separately or through the organizer.  At the time of riding the test event in mid-June, organizers had said half of the spots were already filled, with a large number of those entries coming from Europe. The registration fee gets you the following: Check back for full stage route details in the coming weeks.

GET YOUR RIDE ON – MAMMOTH MOUNTAIN GRAN FONDO