When cycling becomes a prescription for life 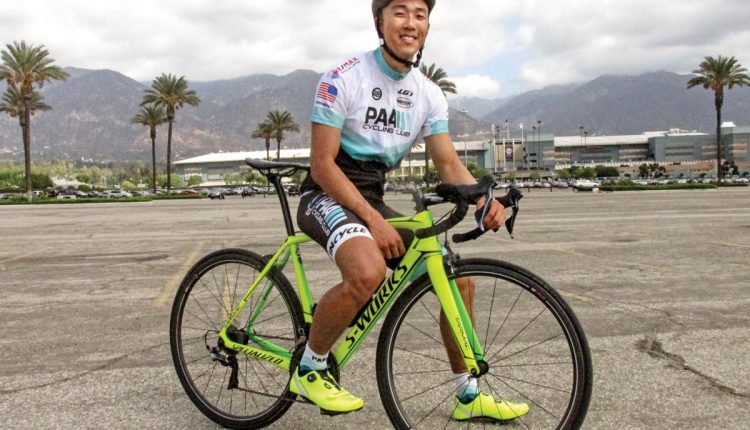 One of the best benefits to all the riding we do there is that there is never a shortage of people we run into, each with a personal  story to tell about what role the bicycle plays in their lives. One of the most entertaining was that of Michael Lee who came into our lives on the Montrose Ride on a beat-up bike that epitomized that antithesis of all things SoCal bike geekdom. A 40 year-old bike? Fenders? Flat sole shoes?

Over the weeks and months we watched Michael evolve as a dedicated and, most important of all, a passionate cyclist. It  was inspiring to say the least.  Along the way we helped him out with some gear and soon enough he was pedaling away from us up the Winston Street climb! Michael Lee is a celebration of all things cycling and we’ve been happy to play a role in his cycling story.

What got you started riding?

After suffering through a horrendous commute in my car for a year, I woke up one morning and decided that I never wanted to drive to work again. I then had to make what seemed like a harmless decision: would my commuter bike be a practical, out-of-the-box hybrid bike or the old steel road bike on Craigslist with downtube shifters in a likely significant state of disrepair?

It was my wife Giovanna who lobbied for the ’79 Trek on Craigslist, which she felt was a more inspired choice than a soulless hybrid. Only after I picked it up and brought it home did I gradually realize the bike maintenance nightmare I had inherited—the square-taper left crank wouldn’t stay on, the headset was gritty, the cassette oscillated like a wobbly top and the tubular glue had been stuck on the rims for 25 years. I bought countless new tools and parts, pored over Sheldon Brown’s hallowed repair and maintenance guides online, and eventually, and imperfectly, got the thing rolling.

Call it Stockholm syndrome, or mere exposure, but I fell in love with that vintage blue Trek. I later learned that the guy who was selling the bike didn’t know what he had. It had a beautiful old Cinelli buffalo hide saddle and a Campy Super Record crankset, which I learned together cost more than I had paid for the whole bike. While it was wonderful standing still, I was instantly addicted to how it felt when I tightened the toe straps and smashed on the pedals – in fact, I loved how it rode so much that I decided to take it out on some faster local rides. A quick Google search revealed that the Montrose Ride was super serious and feeling particularly brave I decided to go for it.

Those first rides were tough, but in between some bewildered glances and snide comments at my toe clips and tennis shoes, I got plenty of encouragement as well. Eventually, I was seeing those bewildered looks later and later into the ride as I pulled alongside unsuspecting riders, who would later offer a friendly word at the hilltop finish in Sierra Madre. The Montrose ride was the first time I felt like I was a part of something greater than myself on my bike, which was huge in building my confidence as a rider.

Nothing typified the sense of community at the Montrose ride than the first time I met Zap. I was trying to stay warm before the start of the ride with my old Trek and my cheap-ass Chinese-made bike shorts, loose shirt and flat-soled Nikes when Zap came over to say a word. In retrospect, I looked totally ridiculous and would have deserved a jeer or two; instead, he complimented my bike, gave me some context on its history and, as the ride got started, offered me pointers on how to pedal smoothly and move around in the bunch.

The next week Zap offered to meet me for a post-ride burger and showed up with bib shorts, jerseys, a helmet and a few issues of RBA. I fit in way better on the group ride after that, but my bike was a different story.

“I was grateful that the experience of racing bikes is open to anyone who wants to try it out. There’s nothing quite like chasing down a wheel, holding on for dear life, and then almost literally throwing caution into the wind with an attack.”

When we rolled into the finish of the next week’s Montrose ride, my left crank literally fell off. Only Zap can tell you what made him offer to loan me a new bike, but it’s hard to think of a more pathetic way to end a ride.

Zap kept mentioning this mythical bike as a possibility, but I didn’t believe him until we met up in the parking lot—fittingly, at the South Pasadena Trader Joe’s, the start of the Montrose ride—and he handed over a neon yellow S-Works Tarmac with full Shimano Dura-Ace components. Of course, I had no context for how amazing this bike could be at first, but I soon found out after putting down the first pedal stroke.

What made you decide to start racing?

Almost as soon as I first rode the Tarmac. I would say it felt like a spaceship compared to the old Trek, but that might be an understatement. I felt like it broke the laws of physics as I teleported from one corner to the other. That feeling of getting out of the saddle and flying to the front of the group—and the ensuing endorphin rush—made me want to see how fast I could go. In high school I had been a fairly competitive track & field sprinter and bike racing gave me that competitive outlet again.

My first race was the Category 5 criterium at the Redlands Classic. I was excited to try for the best possible result, though I had no idea how I’d finish. I never challenged to win the race, but I was never in danger of getting dropped, either, finishing ninth out of 18 riders. Ultimately, I was grateful that the experience of racing bikes is open to anyone who wants to try it out. There’s nothing quite like chasing down a wheel, holding on for dear life and then almost literally throwing caution into the wind with an attack. Since then, my best result has been second at the Santa Barbara Road Race, as well as a third at this year’s Redlands Crit. I’ve just recently upgraded to Cat. 4, and I’m excited to see how I stack up.

“Almost as soon as I first rode the Tarmac, I would say it felt like a spaceship compared to the old Trek, but that might be an understatement. I felt like it broke the laws of physics as I teleported from one corner to the other.”

Obviously, after learning about power-to-weight ratios and wanting to win more races, I’ve came down with a full-blown case of the carbon fibrosis. Since getting the Tarmac, I’ve aggressively looked out for deals and have since fitted it with carbon rims with a Powertap hub, Easton carbon fiber handlebars and a Fabric saddle with carbon rails. Were these parts (about $1200) expensive on a resident’s salary? Yes. Do they make me feel super fast? Also, yes. Did I justify them to my wife because I got a deal, saying it’s for my health and all the other rationale every married cyclist knows by heart? You bet!

Figuring out a workable training schedule is hard given my unclipped life as a resident. I’ve settled on a schedule where I get in around three interval sessions on the trainer every week and one long ride on the weekends, though sometimes I have to work nights and weekends which makes meaningful training difficult. At this point, though, I am blissfully so far gone that I’ll do anything to get the miles in. It’s not uncommon that I’ll start and finish rides at odd hours from the hospital, which always earns me an amused look from security.

How have things changed for you since your first Montrose ride?

I’ve gone head over heels for cycling. I love exploring new routes and vistas, and feeling the sun and air on my skin. I love how garish and kitschy cycling fashion has permeated my normal wardrobe. I love my cycling club—shout out to Pasadena Athletic Association—for giving me an extension of that community I first got to know at the Montrose ride. Riding has even cured my medical-school-induced high blood pressure, and as I’ve gotten fitter, I’ve had more energy I have for my life off the saddle.

My wife Giovanna deserves all the credit in the world for handling the sheer pace of my transformation into a cyclist. After all, she was an important part of how this story started, intuiting that there might be an adventure to be had in first getting the old Trek road bike. We’ve even gotten a bike of her own: a Trek Emonda with Shimano 105 components, another Craigslist find. Since then, we’ve done a bike trip through Oregon, and you might see us on a Sunday riding on the L.A. River path through the Elysian Valley.

It’s been less than two years since I started riding, and I can’t be happier that I’m in this deep. Zap and Road Bike Action deserve the lion’s share of credit for all of it.

Relax and have maximum fun on your bike every time out. Be friendly and smile. Meet some folks you like to ride with and never look back.

THE FAMILY WITHIN – INSIDE VELO PASADENA

Zap’s Column: The Rules & Ritual of The Ride