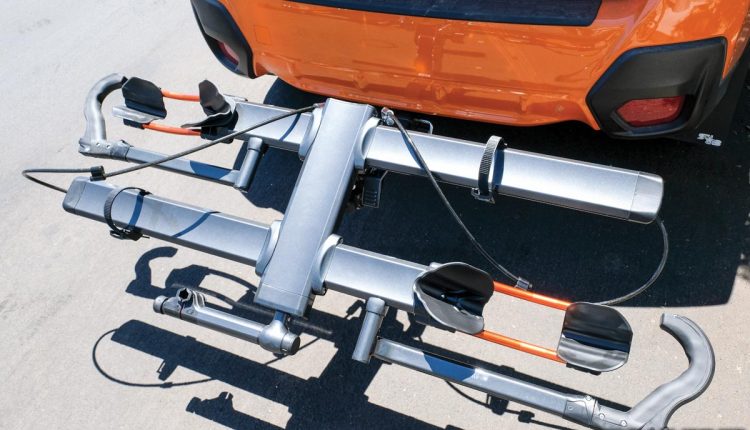 When it comes to cycling, we all enjoy traveling to new destinations and exploring new routes or roads. Traveling with your bike is an important part of the experience, and a quality tray hitch rack, in our opinion, is one of the best options when you’re within driving distance.

With countless options on the market, we drilled down on the choices to compare two of the most popular—the Kuat NV 2.0 and the 1Up USA Heavy Duty Double. Both racks are a premium product and a perfect mate for bikes of all levels.

The Kuat NV 2.0 comes in two models—the Base and the Regular—that has the added Trail Doc-integrated repair stand. The NV 2.0 fits two bikes with an option for another two bike add-on for an additional $489. The rack is compatible with wheel sizes from 20 to 29 inches. The retention system uses a shepherd’s hook style that ratchets down on the front wheel just in front of the fork. 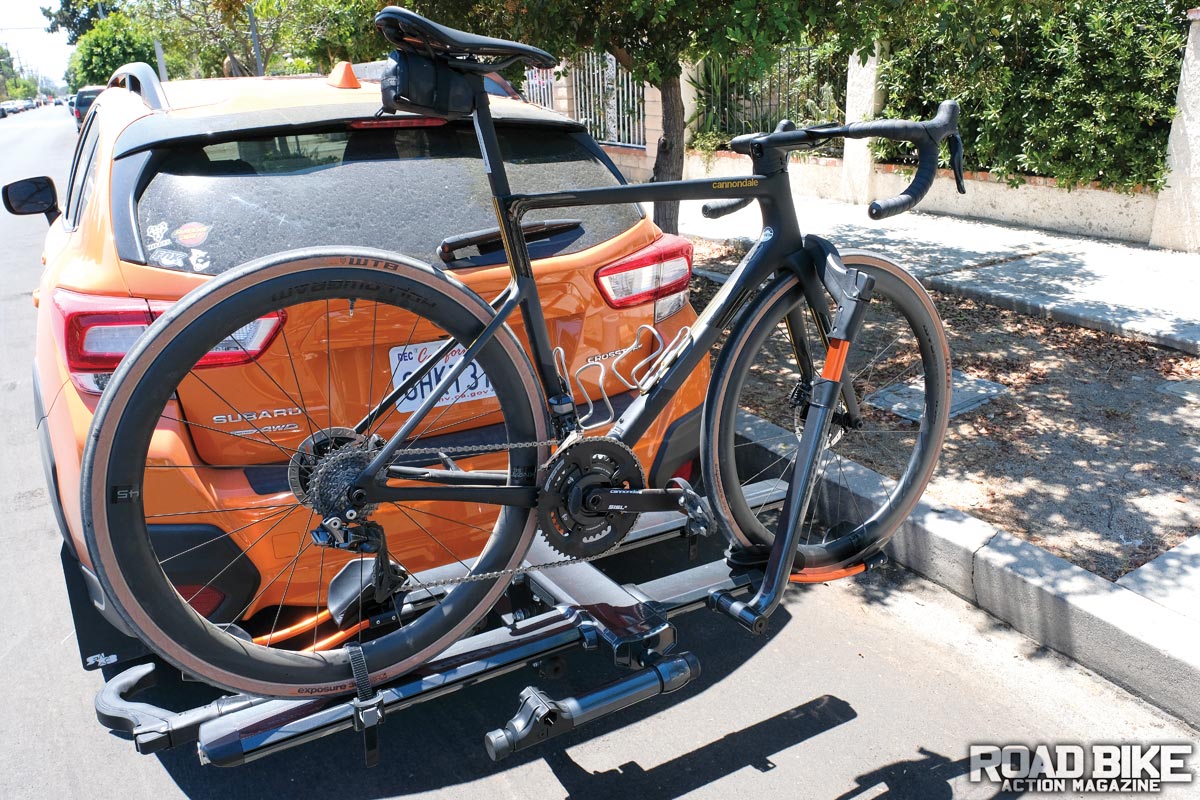 There are two variants, depending on the style of hitch receiver you have, dedicated 2- or a 1.25-inch version. The 1.25-inch version can use an adapter to fit a 2-inch receiver, but it is not compatible with the two-bike add-on. They all use a hand-tighten cam system to minimize rattle in the receiver and use a locking hitch pin to secure the rack to the vehicle. The NV 2.0 has an integrated cable lock that is hidden in the tray when not in use.

The NV 2.0 is one of the best-looking racks, with a balance of function and design that many racks on today’s market are missing. The rack has a convenient foot and hand lever that allows it to fold up or down. The upward position minimizes the rack’s extension past the bumper when there is no bike attached. This upward position is also used to take advantage of the built-in Trail Doc repair head for roadside repairs and adjustments. The downward position is used to access trunks or open a rear hatch while bikes are mounted. This position is not for use when the car is in motion, but rather a convenient alternative to removing the bike. 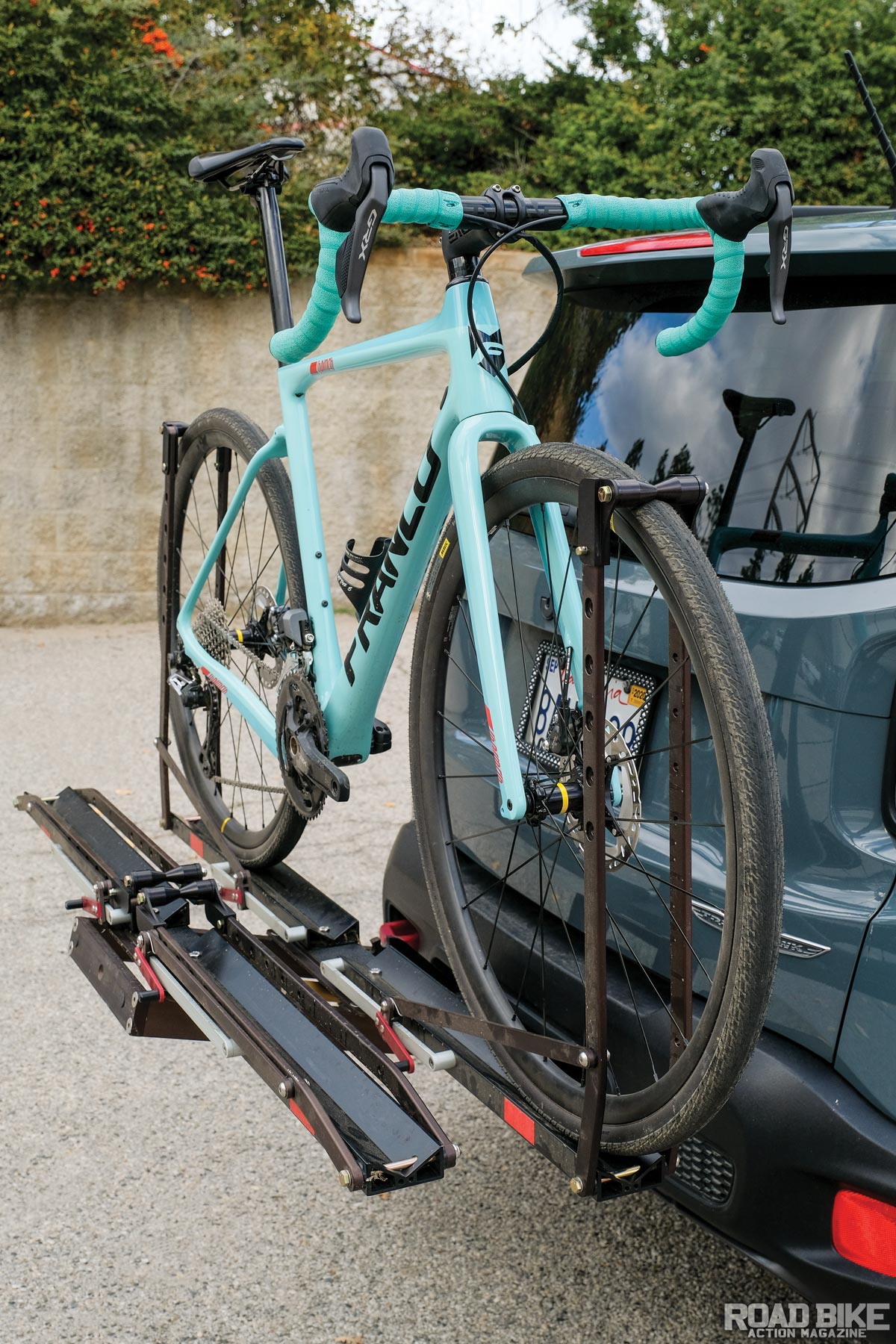 The made-in-America 1Up USA offers a few variations of their rack, but they essentially all function the same. In addition to the single-bike option, like the Kuat, you can choose the receiver size. There is also a Super Duty option for the single or double if you choose the 2-inch variant that adds an additional tray support. The Super Duty increases the maximum bike weight per tray from 50 to 75 pounds.

The racks are available in silver or black and have the capacity to add two additional trays over the stock rack, so in our case the capacity maximum is four bikes. Each add-on will set you back $219 for the silver or $249 for
the black. 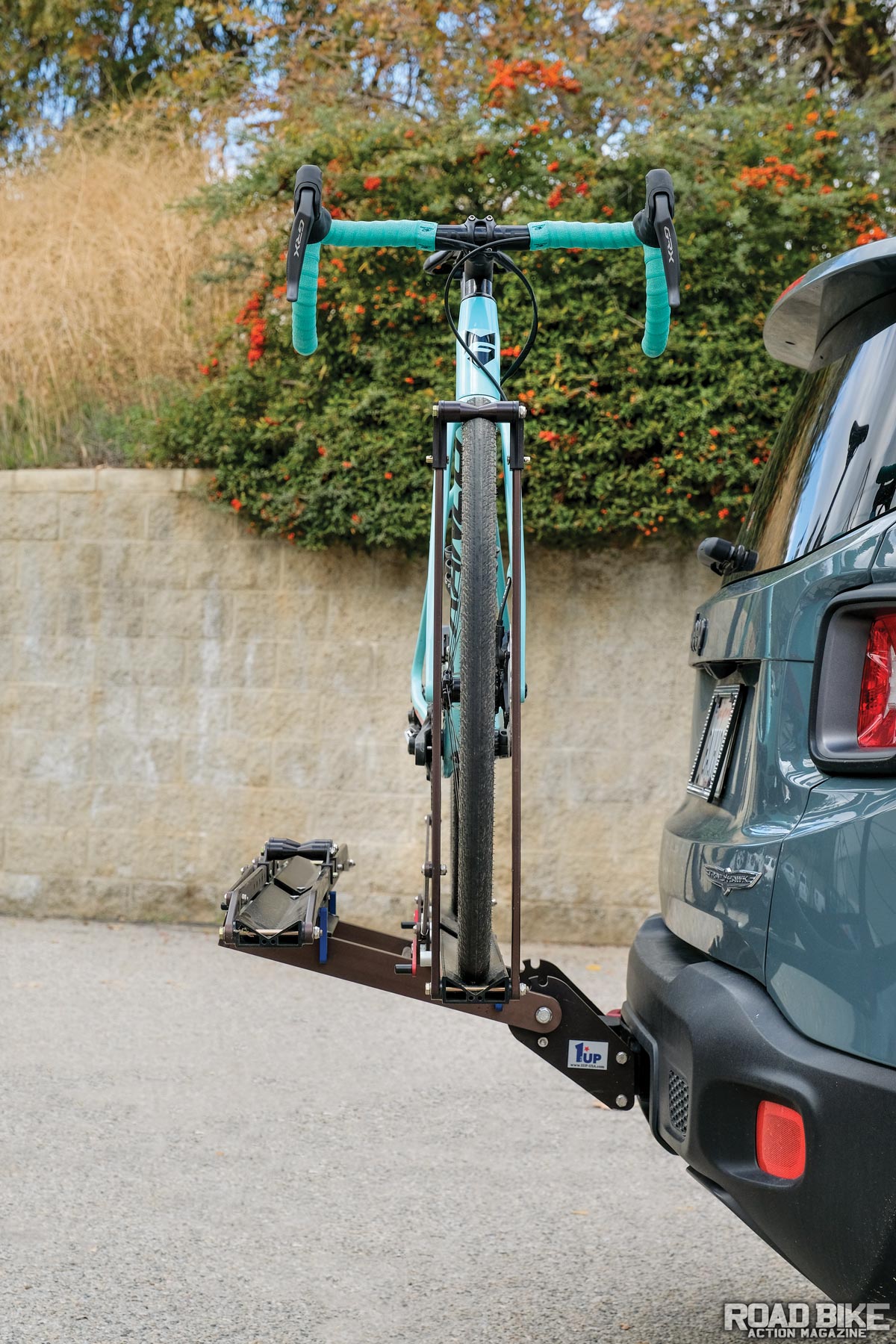 The 1Up design is what we would consider functionality (as opposed to aesthetics) as its main goal. The machined alloy body reminds us of something that a NASA engineer would have designed in their garage with all the bolts, nuts and hardware visible.

To secure the rack to the receiver, 1Up uses a proprietary hex key and ball that expands out of the hitch bar. The design does not rely on a hitch pin and increases depth adjustability while minimizing wobble.

To secure a bike to the rack, there are two arms that tension down on a bike’s tires, thanks to a ratcheting lever. The arms can be adjusted to fit wheel sizes from 16 up to 29 inches. This system eliminates any contact with the bike frame. Similar to the Kuat, the 1Up also has multiple angle positions to allow easier access to the rear of the vehicle.

The NV 2.0 is a solid platform, and the thick trays give you confidence that it will hold up. There is little to no slop or movement, meaning the rack is quiet on the back of the vehicle. The tire hook and front tire tray have molded plastic that does offer some flex and damping. The ratcheting arm lowers the hook over the front tire and against the front of the bike’s fork. This contact with the frame can cause some surface scuffs, even though the hook has a layer of rubber to buffer the rigid plastic.

In the rear, there is a plastic strap that goes over the rim between the spokes and holds the wheel against the tray. The ratchet is simple and is not designed to be super tight, nor does it need to be any tighter. Removing the bike is easy, with the front arm housing a large button-style lever.

At just over 50 pounds, the rack is robust, and some smaller vehicles will notice the leveraged weight. The foot lever used to tilt the rack in different directions is very convenient when you have a bike in hand and need to tilt the rack down. When the rack has two bikes on it, the foot lever is also nice because you can use both hands to support the weight as you lean it back to get in the rear of a vehicle. However, the extended length also makes it hard to reach the lever with your hand.

On the road, we had no complaints about the rack. We installed it on a car that has a fairly low hitch, and entering driveways could angle the car enough that the rack would momentarily drag. Nothing detrimental, but the part that would drag is the tool-free knob that tensions the rack to the receiver. Crossovers, trucks and SUVs had no issues at all even, with the two-bike add-on.

When people first see the 1Up, they are always impressed with how compact it seems on a vehicle. Thanks to its adjustability in the hitch receiver, you can get it pretty snug to the bumper, and the tray arms fold in nearly flush as well. The spring-secured bar that is used to adjust the angle is a bit harder to use than the Kuat’s lever but still easy. Like the Kuat, as you start to add additional trays, it does increase the difficulty. To aid this, 1Up has designed an adapter that moves this handle to the end of the rack and is a great option for those looking to use the additional trays.

Securing the bike is probably the easiest we have ever experienced. Simply lift the small red ratchet lever and fold the arm up and out on each side. Then, you place the bike on the tray and close the arms down on the tires. It is so simple that multiple testers felt like they needed straps or some additional retention like other racks.

On the road, the bikes do seem to move a bit while secured, since the arms are only touching the tires. The rack is rock solid on the vehicle, with virtually no movement. A few of our testers that were unsure of the system ratcheting down the arms so tight that it was difficult to release.

One thing that stood out to us is that the second tray is slightly higher than the first, and this trend is maintained as you add on more trays. On the same car that was dragging with the Kuat, the 1Up did not hit. It was still close, but we had no contact. The downside to this is that if you have four bikes, the last one is pretty high and can obstruct the rear-view mirror a lot. The rack was a bit lighter, but still in the 50-pound range.

At the end of the day, both of these racks are extremely secure, strong and get the job done. The Kuat is aesthetically more pleasing for most. The 1Up won’t win any art design awards, but it’s practical, simple and reliable. The no-frame-contact design of the 1Up also means no frame scrapes.

The Kuat has both locks for the bikes, as well as the rack, while the 1Up only locks to the vehicle. When it comes to ease of use, it’s a tossup, because the Kuat’s foot-actuated pivot is useful, but the 1Up has the top step when it comes to minimizing bike-on-bike contact.

Neither racks are a featherweight if you are the type of person that takes it off after each use. Luckily, both are very fast and easy to mount and have a rattle-free interface. We do enjoy that the 1Up has a level of adjustment when mounting, allowing you to get the rack as close or far away from the bumper as you want. Both racks offer the ability to purchase add-on trays, but the Kuat’s Trail Doc repair head is a nifty feature.

• Made in the USA

• Add on trays one at a time

• Only contacts your tires