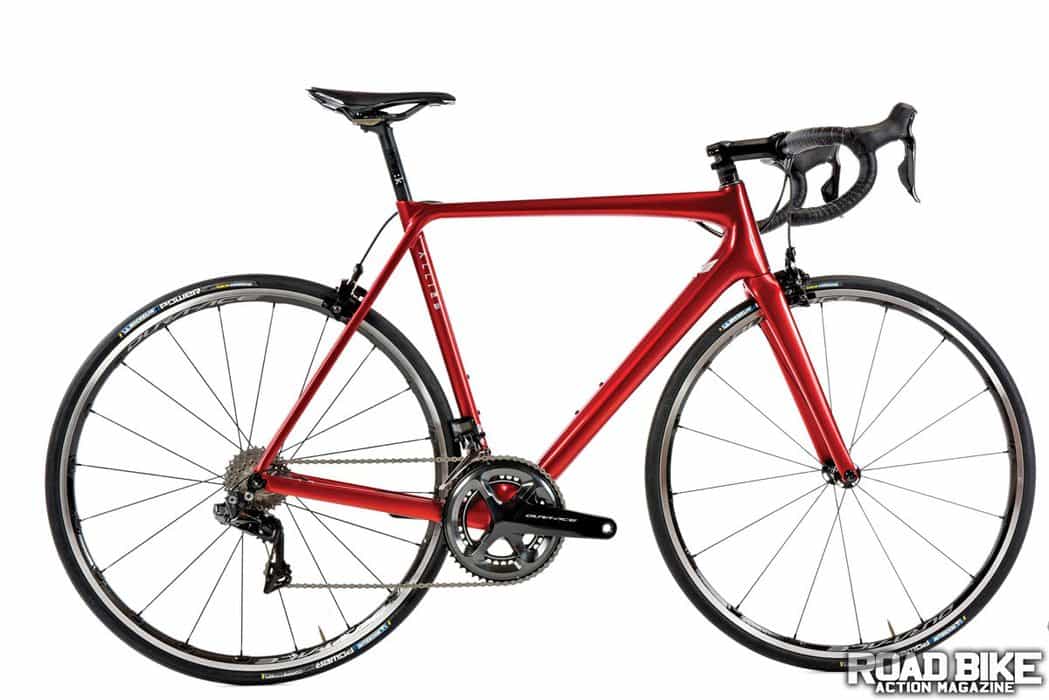 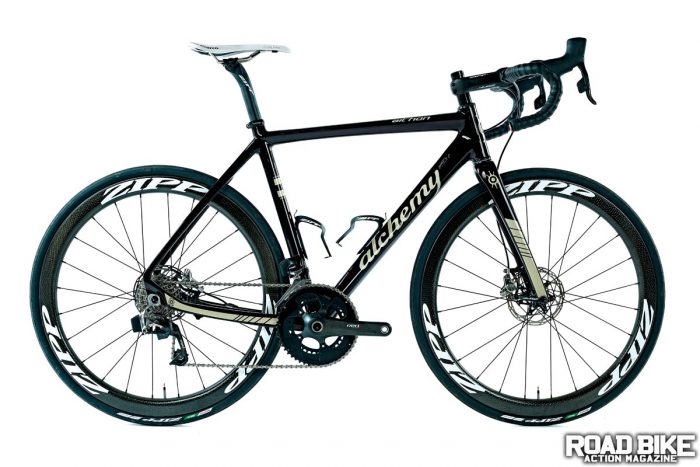 While electronic shifting isn’t news, the recent evolution of the technology has been quite profound. In the world today there are three main players available to consumers—Shimano Di2, SRAM eTap and Campagnolo EPS with FSA (who have announced their intention to play but, as of yet, are not ready for prime time). On the surface, Shimano’s latest version of their Di2 drivetrain hasn’t changed much in operation, but the newest release has the tech nerds itching to play with a wide array of custom tuning, while the crew at the SRAM tent are taking a bit of a different route.

Shimano has added an unbelievable number of options that the end user can modify with the touch of a few buttons on a mobile phone. Yes, you can now control much of the new Di2 settings wirelessly from your phone using their E-Tube app. They have also added a few new shifting modes to the road group. On top of the typical manual shift mode there are now synchronized and semi-synchronized shift modes.

“Both systems offer unbelievable precision and reliability—just keep an eye on the wear of the components, because you will no longer be able to feel the progressive detrition of a shift.”

Synchronized shift mode uses customizable settings to automatically shift the front derailleur up or down depending on the gear you are in. Did we say auto shift? Yes, which means if you are in the large ring and start to move to easier gears in the rear, the front will shift into the small ring when you get to a certain combination. It will then also readjust the rear derailleur as well into a designated harder gear. The semi-synchronized setting is very similar, but as you switch the front shifter, it will change the rear a certain number of gears automatically.

This may seem a bit overwhelming and complicated, but with a short bit of use, it becomes easy to figure out. While we normally would shift the front then quickly shift two or three gears on the rear to get closer to our previous gear, the bike does all the thinking, allowing you to stay focused on the road. On top of setting up these settings, the app also allows you to change the function of the buttons, speed and quantity of shifts per button press, as well as update any firmware for each component.

SRAM has gone a different route with their eTap drivetrain and have created the first truly wireless shifting system that, above all else, brings simplicity to the table. With only two shift buttons (one on each lever) to control both the front and rear derailleurs (the left controlling easier in the rear and the right controlling harder in the rear), SRAM has redefined the concept of simplicity.

To get the front derailleur to move, all it takes is a simultaneous tap of both the levers at the same time to attain either an easier or harder gear. It seems odd at first, but within the first minute of riding, it becomes entirely instinctual. Setup and installation are as easy as bolting on the derailleurs and setting the limit screws. There are no wires and complex routing of cables while trying to find a home for the power source, because each unit houses its own independent battery.

The Shimano system has a load of small parts to customize the system to an individual rider’s personal preferences. On top of all the shift-button options there are also wires, junction boxes and a battery that needs to be installed. It can be a bit of a puzzle to get it all installed clean and correct.

The derailleur units themselves have been trimmed down in size and closely resemble the mechanical ones in size, shape and weight. The shifters house three buttons per side with the option to add sprint shifters too. Each button has a single function and can be customized in the phone app.

SRAM has eliminated not only the wires but the idea of memorizing button function and placement. They do offer some additional add-on remote shifter buttons that do require wires, but these are not necessary. The shifters house a coin battery that has a lifespan of about two years, while each derailleur houses a removable and rechargeable battery that gets around 500 miles’ worth of shifts. They are easily removable, allowing you to pop them off after a ride and charge them wherever is convenient. The fact that they are swappable is also a big plus; in case you forget the system isn’t charged up or one dies (usually the rear), just swap them to get the bike in a more ideal gearing to ride home.

Both systems are incredibly precise with micro adjustments controlled electronically. With Shimano, the front derailleur automatically moves to eliminate chain rub on the cage as the rear is cycled through its paces. The SRAM system relies on their Yaw technology, eliminating the need for the trim adjustments. Both systems can get micro adjustments to the rear derailleur with a simple combination of button clicks.

Shimano ships their systems in the “normal” shift-speed mode. This means that the response time between tapping the shifter and when the shift is made is set to the most neutral speed with two faster and two slower options. This normal speed will feel fast if you are coming from a mechanical shifter. The shifts are quick and spot-on every time. Multiple gears can be changed by either holding the button down or by quickly tapping the button multiple times. The shift buttons are fairly small and close together. We found that if you ride only Di2 it’s not a problem, but even one day on a different group would have you needing to think and hesitate on which button controls which action.

The front derailleur is fast and also very powerful, so low cadence shifts to the big ring are not as fluid as on a mechanical version. There is no finessing the tension and shift, as many have become accustomed to on-mechanical options. Instead, we found that shifting earlier while cadence is higher usually resulted in a much cleaner and quieter transition.

SRAM’s eTap has a very different feel when comparing it to Di2. The shifts are slower, but not slower in motion, rather slower in response to the button actuation. With the whole system being wireless, SRAM relies on a proprietary connection that allows each unit to go into a semi-sleep mode when not being used to help save battery. This means there is a delay from when you press the button to the actual movement of the derailleur. If you change multiple gears at once, the delay is only subject to the first shift. This “delay” is extremely short but noticeable when compared to the Di2.

“If you only have one bike and want the ability to customize buttons and shift actions, then nothing compares with the new Di2.”

The big difference with eTap is the simplicity and minimal number of buttons, which makes for very easy and thoughtless adaptation. The left shifter has one button that goes up on the cassette and the right houses one button that goes down on the cassette. Then, a press of both buttons simultaneously moves the front derailleur up or down depending on the location it was previously in. From all the testing we have done, we have yet to shift in the wrong direction or hesitate before a shift. The buttons are also much larger than those found on the Di2.

The front derailleur on the eTap does not trim but will over-shift a bit depending on the location of the rear derailleur to make sure it completes the shift, then a second later resides in its normal position. Because of this lack of trim, the front derailleur is adjusted with limit screws, not electronic adjustments. The derailleur also uses SRAM’s Yaw technology, which means as it moves left and right, it also changes the angle of the cage relative to the chain. This results in a much quieter and smoother shift if setup is correct, but like the Shimano, it works better when cadence is higher.

The verdict is simple—a wireless system whose biggest impact comes when you’re building a bike, or a wired system that provides unparalleled options for personalization. If you own multiple bikes and they are not all Di2, we would recommend the eTap because of its simplicity and natural adaptation. But, if you only have one bike and want the ability to customize buttons and shift actions, then nothing compares with the new Di2. Both systems use rechargeable batteries, but the Di2 requires the bike to be near a plug or have a very long cord, while the eTap batteries are convenient to remove and charge anywhere. Both systems can wirelessly link to many of today’s modern computers and give live feedback and gear position, but it’s optional on the Di2 version, so make sure your bike has added the proper hardware.

Both systems offer unbelievable precision and reliability—just keep an eye on the wear of the components, because you will no longer be able to feel the progressive detrition of a shift. Also with the Di2, it’s important to make sure that the connections are firmly seated without any tension on the wire. We’ve had many Di2 system failures due to connections (especially under the bar tape) becoming disengaged from bad routing and wires that are too short.