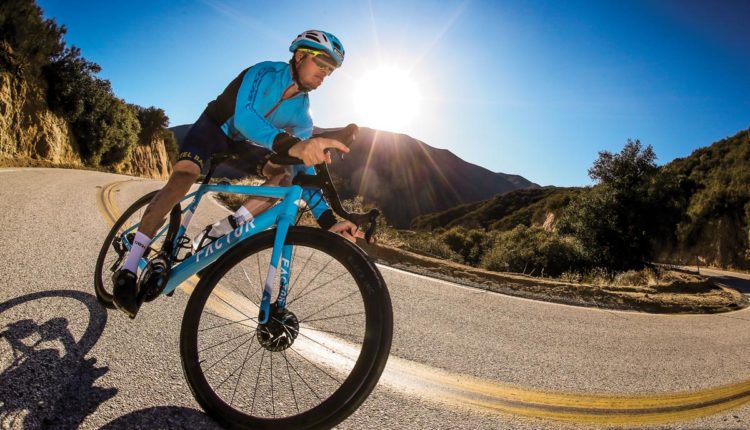 At the beginning of 2017, Factor was another middle-tier bike brand grappling for worldwide market traction. What to do? As the brand is overseen by retired pro riders Baden Cooke and David Millar, it didn’t surprise many when they decided racing would be the best way to raise the company’s profile. It worked.  After partnering with the French AG2R La Mondiale team, Factor propelled themselves to the top heap of the racing world when team rider Romain Bardet won a stage in the Tour de France and eventually finished on the podium in Paris.
Fait accompli.

The O2 frame stood out on all our group rides for the simple reason that it is so fetching to the eye. Starting with it’s beautiful blue hue, the carbon frame is a picture of clean, integrated and simple design. The O2 frame is made up of three different types of carbon, each strategically chosen for specific performance goals. The combination of medium- and high-modulus carbon adds to the cost of the (claimed 740-gram) frame, but also allows for its light and stiff character.

With the O2 being a race machine, it’s not surprising to find a short (and tapered) head tube to aid in an aggressive rider position. Happily, the disc model eliminates the seatstay bridge, which adds to the overall svelte look, along with the under-the-top-tube seat-binder wedge.

Our Factor O2 came equipped with a Shimano quick-shifting Dura-Ace Di2 drivetrain, hydraulic flat-mount disc brakes and 140mm rotors. A compact-gearing Dura-Ace crankset gave us plenty of gears for the steeper climbs, and we rode with an 11-28t rear cassette. Factor’s own Black Inc. brand of carbon clincher wheels were mounted with oversized 28mm Continental GP4000 tires. The 12mm DT Swiss thru-axles had no handle, so bringing an appropriate-sized Allen key on every ride was mandatory.

The Black Inc. name was also found on the one-piece carbon bar and stem and setback seatpost. A carbon-railed Fizik Antares saddle helps keep up appearance and performance.

Jump on the O2, and in no time at all the bike impresses with its agility and acceleration. If you’ve been riding a more endurance-style bike, the Factor’s aggressive intent is obvious. With the one-piece bar and stem system, the combination of the narrow fork, the front of the bike felt very nimble and light, even to a point where we felt it want to drop from side to side while standing and putting pressure on the pedals. This took a little getting used to, as it does have a much different feel. Owing to the stiffness of the bar/stem combo, more than a few riders complained about the amount of abuse their hands felt after a few hours in.

The Factor really comes to life on the climbs. With its aggressive position and light manners, you can get into a good groove while going uphill. If you have to change pace or jump on another wheel to accelerate, the O2 will react quickly. The compact feel of the frame made for a comfortable position on the steeper climbs, as you could really get on top of the pedals for the efforts that are needed.

The stopping power of hydraulic disc brakes is always worth noting. Having a non-disc version to ride alongside, the disc bike made the value of the superior braking power even more obvious. Though not an aero bike, the O2 got up to speed quickly and accelerated well under power. The only thing that hurt the bike’s top-end speed was the compact gearing, which at times left us looking for more gears.

Keeping in mind that the Factor O2 is a real race bike, we weren’t surprised to find a short 98.9cm wheelbase with 40.5cm-long chainstays. The obvious result of those numbers was a bike that turned quickly enough but also had an aggravating amount of toe overlap, which made track stands and even some medium arched turns problematic.  The one thing that did surprise us was how stout the slender fork turned out to be. There wasn’t even a tad of flutter under hard braking. Nice. 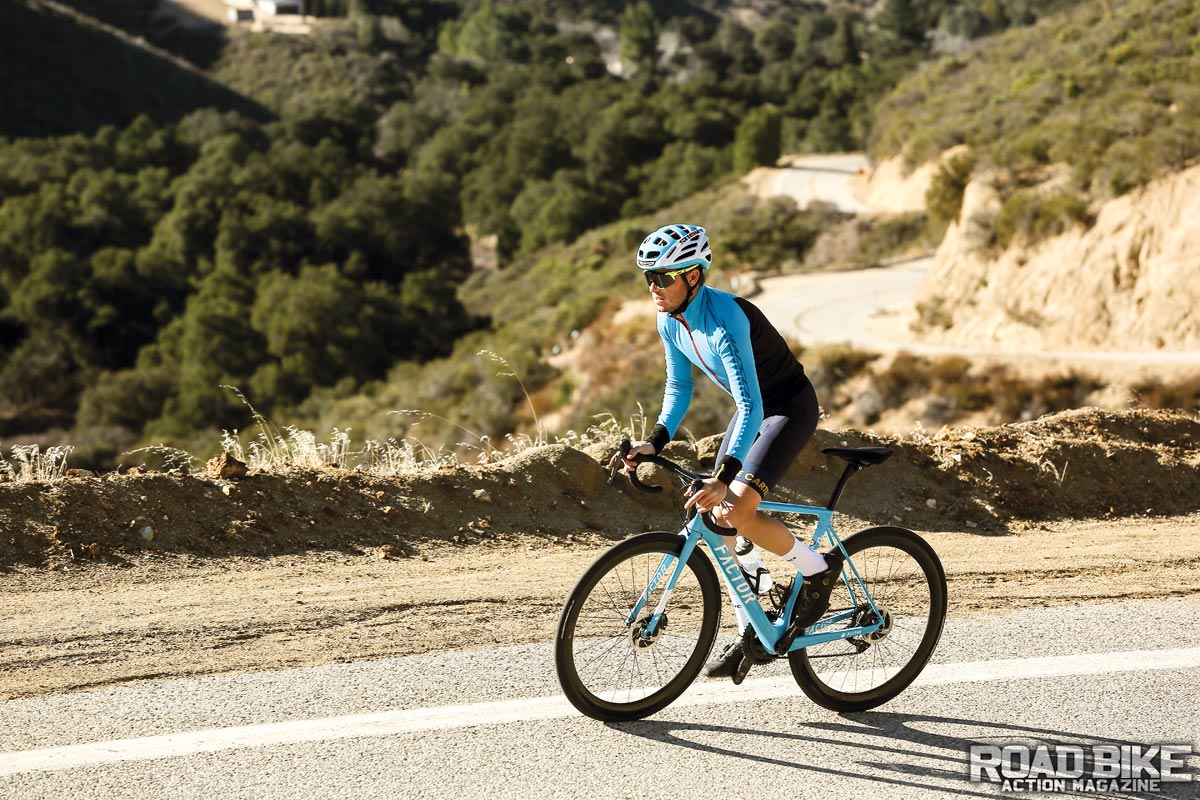 If you’re looking for a high-end race bike capable of getting you onto the podium at the most prestigious race in the world, the Factor O2 has proven itself capable. This bike definitely boasts aggressive geometry, which may not work best for the weekend warrior. With its simple tube shapes basking in the powder blue finish with nary an exposed cable, the Factor’s clean and minimalist profile made it a big hit wherever we rode the bike. Kudos to Factor for making the O2 available in five different colors that include a great-looking burnt orange, a Bardet replica white and, yes, even the obligatory black.

Due to the rough-ride feel and the size/shape limitations, the one-piece bar and stem weren’t for everyone. Traditional bar and stems may be falling out of fashion, but they still provide worthy qualities in both performance and rider preference. Hitting the scales at under 15 pounds makes the Factor one of the lightest disc brake bikes we’ve ever tested and perhaps gives an indication of where modern bike design is headed. Yes, as with all the Euro sleds tested in this issue, the price is super steep, so it’s the potential trickle-down that leaves
most excited.